One Less Planet in the Solar System 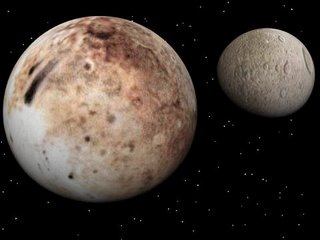 Yes, its true. Some dorky, 40-something...well, actually 2,500 dorky, 40-something astronomers from 75 countries who still live in their parents' basement have all of a sudden decided to redefine what a planet is. According to the Associated Press, it concluded a "...tumultuous week of clashing over the essence of the cosmos."

Contemplating the "essence of the cosmos" constitutes a tumultous week? Are they serious?

Heck, a tumultuous week for the other 99% of us working stiffs is getting a speeding ticket followed by a flat tire on the freeway driving home from work after getting chewed out by your boss. Two days later, you kids get sick and by Friday, they've passed on their illness to you just in time for the weekend. That's a tumultuous week. But I digress.

Here is their new definition of a planet:

"A celestial body that is in orbit around the sun, has sufficient mass for its self-gravity to overcome rigid body forces so that it assumes a ... nearly round shape, and has cleared the neighborhood around its orbit." After "careful" deliberation, these same astronomers have concluded that Pluto is not a planet any more. Instead, it will be classified as a "dwarf planet" similar to astroids and comets.

Guess what? No one really gives a damn.

Look, I am the king of science dorks. I've memorized PI to 75 decimal places, read books on cosmology and in my spare time, I've been known to dable in formulating new ways to express baseball statistics. But herein lies the difference between me and the aforementioned astronomers:

1) I am aware that my interests are on the dorky side. Most of these astronomers are clueless about their level of dorkitude.

3) I am athletically inclined.

Sure, I am stereotyping a bit but don't tell me that these stereotypes aren't true 90% of the time.

I know, mom always said to respect everyone for who they are. I get that.

I'll even admit, maybe I'm being a bit harsh. But I can tell you this: I won't be redoing my 3rd grade planet project made out of spray painted styrofoam balls taking into account the now defunct planet. Honestly, I don't know if the restructuring of the Solar System is bigger news or knowing that their are more than 2,000 astronomy science geeks who have never kissed a girl.
at 5:01:00 AM Posted by Scott Sabol No comments:

No, we haven't gone belly-up

Email ThisBlogThis!Share to TwitterShare to FacebookShare to Pinterest
For those of you who have been wondering why there haven't been any new postings in recent weeks, wonder no more.

Yes, the Evening with Sabs writing staff is still here and in business. However, I like to give the employees a break during the dog-days of summer to recharge their creative minds. This year, I gave them 3 weeks of paid vacation--many have called it a sabbaticle of sorts.

Some take this time for internal reflection. Others go to Vegas and gamble. I, on the other hand, went on vacation with my family to South Carolina (Pictures Forthcoming).

Now more than two weeks removed from vacation and my time for reflection is complete, here are a few of my realizations on the experience:

1. Unlike most adults, my 13 month old son can control 10 people

2. My mom swears when she plays miniature golf

3. Unlike at home, you'll pay triple for water on vacation when your really hot

4. Sand is difficult to wash out of your child's curly hair 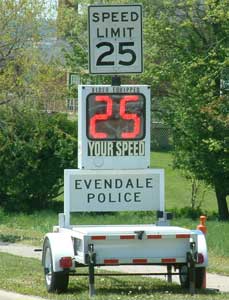 Why. Please tell me why our local tax dollars are being used to purchase these overgrown speedometers on wheels?

Just the other day in my fair suburban town, I noticed yet another one of these beacons of "safety spending" standing on the side of a major thoroughfare which I travel at least 5 days a week. Yes, yes I know. Driving fast (women who put makeup on while driving and cell phones are probably higher) is the cause of most accidents and we should all be more aware of our speed. No agrument here. But do we really need to have it broadcasted in neon lights on the side of the road? I don't know about you but I usually know how fast I drive. Why? BECAUSE I KNOW WHERE MY FREAKING DASHBOARD SPEEDOMETER IS!

So why do I need to have my speed flashed up on an overgrown LiteBright on wheels when all I need to do is look down over the steering wheel?

What. Like this huge speedometer-on-a-trailer is going to be a huge speed deterant? Seriously, how many of you upon noticing the police speed trailer slam the petal to the floor to see how fast you can get it to register before you pass it? If anything, these police speed trailers turn roads into glorified carnival attractions. Instead of paying a dollar to a carnie to see how fast you can throw a baseball into a bunch of metal milk bottles, your testing your car's upper velocity limit on a 200 foot stretch of side street. Hell, it might as well say "Go ahead a punch it!"

Now I'm all about safety. I run into too many people daily who think the word: "School Zone" is code for "Indy 500". The last thing I want to see happen is someone killed by a jackass speeding.

Still, unless there is a cop with a radar gun on the otherside of the speed trailer, don't look for me to pay too much attention to these things. And, not that I would, but if I go too fast, I have my own little notification system and its far more effective. MY WIFE!
at 7:30:00 PM Posted by Scott Sabol 1 comment: