The Second Coming of Clark Griswold

Email ThisBlogThis!Share to TwitterShare to FacebookShare to Pinterest
Once I saw the movie Christmas Vacation, I realized why I was put on this earth. My reason for being became obvious. Someday when I own a house, I thought, my ultimate goal will be to have the biggest and brightest holiday lighting display in the entire neighborhood. 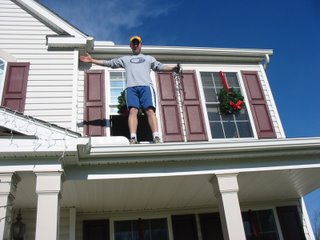 Now that I am a home owner, each year on the day after Thanksgiving, my plan to take over the electricial grid begins to take shape. It began with a marathon think-tank session in the basement drafting out every possible contingency. Temperature, wind, rain, snow, nosey neighbors, dead lights, bad extension cords, they were all accounted for at least in theory. After ten hours in the basement racking my brains out, I emerged and proclaimed to all that would listen that I had the ultimate plan! The lovely Mrs. Sabs' response to my declaration: A stare. You know, the stare that screams "Are you a freak?" It didn't matter. The 2006 Christmas lighting display plan was ready. Today was the day that my ultimate Christmas lighting display plan was executed. And I must say that it all went according to plan. Mrs. Sabs reluctantly gave me props for a job well done. Who's the man.

Clark Griswold I am not...at least not yet. But with three solid years of Christmas lighting experience under my belt, I've learned a few things:

1) Check all of the lights BEFORE you hang them. Seems like a no brainer but trust me, it never fails. Each year, a neighbor hangs them all without testing them and nothing works. Then I hear a volley of expletives between him and his wife blaming the other for the faulty lights. While this makes for great entertainment, it will happen to you and your significant other if you don't plug them in FIRST.

2) Mark the strands with labels.

Again, it makes perfect sense. However, when you're tearing it all down after the first of the year, you'll try to convince yourself that you'll remember where they'll all go next year. In reality, by January 10th, you'll forget that you even have Christmas lights. So put labels on your lights!

What the hell are you talking about? Trust me. Neatly coiling up the lights before putting them away might seem like a good idea in an attempt at preventing chaos the following year but it does no good. For some unknown reason, the Christmas lights all snuggled away in the attic undergo a metamorphosis changing them from their perfectly tidey state into the poster child for ultimate chaos over the span of a summer. November rolls around and you open the box stored in the attic and the neatly bundled lights are now a clump of green wires all balled up in total disarray. There is no stopping it. Just throw them in a box and be done with it.

4) Draw a detailed diagram of your layout.

If you need graph paper to do this, borrow some from your kids. Make sure the labels on your lights are identified in the diagram. Maybe buy some colored pencils of markers. Color is good.

If you plan to add more lights each year, you need to add a dedicated fuse or ten. Its all about the power, baby!

The Nissan One Year Retrospective

Today is a very tough day for me. It marks the first anniversary of a tragic loss . Since that fateful day back on November 14, 2005, the emptiness inside me still lingers. The grieving process has been a long and painful road with many setbacks along the way. Each day brings its own set of challenges as I learn to live without this member of the family. What could this insurmountable loss be that has my emotions in a knot?

...Just one short year ago, my very first vehicle I ever purchased--a 1990 Nissan 240SX--was hauled away to the junkyard. A long life of service spanning almost 16 years, 31 states and 158,000 miles (81,000 miles of which were mine--my brother put on the remaining 15K) was cut short by a delinquent female driver who sideswiped the front end inflicting damage that was too costly to repair.

The significance of today has hung over my head like a trip to the dentist because until this day, I couldn't decide on a proper memorial to fit this fine machine and its years of service. Rather than list her long list of battles won from The Badlands of South Dakota to the deserts of Arizona to the hills of West Virginia to flooded roads in Georgia, here are a few pictures of the "SX" in all her glory. 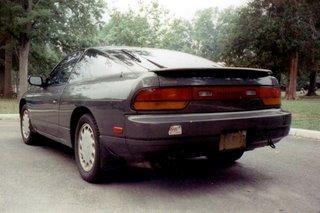 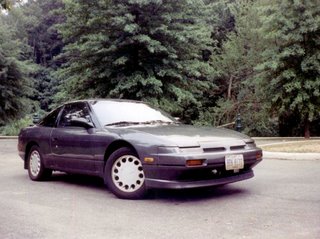 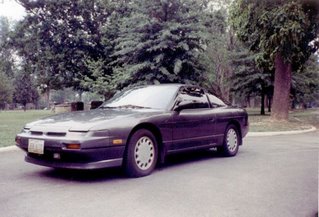 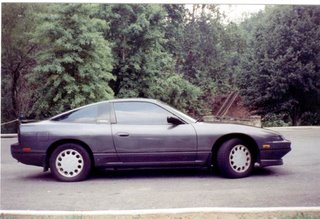 She was as sleek as a Ferrari and as solid as a LIncoln. She handled the different roads in her travels with a gentle touch yet with reckless abandon that made it a joy to pilot. It didn't matter whether it was volcanic ash or sand, the Nissan would glide through it all.

The curious side of me often wonders what happened to her. Is she in a far off junkyard disassembled down to the frame forever sealed in a rusted out crypt? Or did someone see a glimmer of potential in the Nissan and rescue her in the hope to give the SX another lease on life? Honestly, there have been times where I've come really close to looking up her VIN number online to confirm my spectulations.

Today, the Nissan's wheel covers and license plate hangs in my garage as a rememberance of her service. Please take a moment and add some fuel injector cleaner to your ride or maybe get it washed as a tribute to your vehicle and what it means.

Send cards in lieu of flowers.
at 12:33:00 PM Posted by Scott Sabol No comments:

Email ThisBlogThis!Share to TwitterShare to FacebookShare to Pinterest
This day couldn't have come quick enough for me. His hair--as evident in the pictures--was getting out of hand. Of course, my wife and all of the ladies at her place of employment and in the neighborhood along with all of our relatives think Nathan looked sooooo pretty with all of his curls. I think he looked way too pretty for my taste. Which brings us to today and his trip to the haircut establishment called Reflections.
Let's see the before and after pictures of the back of his head showing the demise of his girly curls. 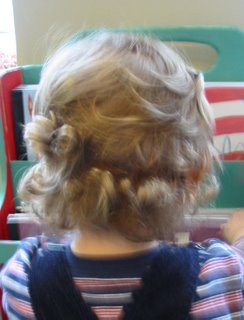 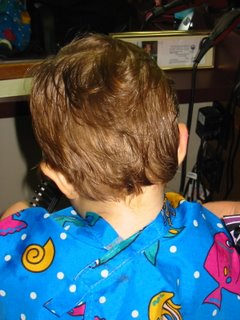 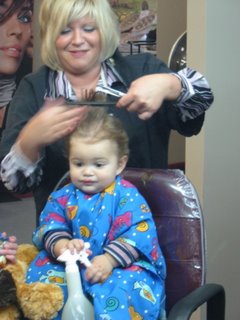 The top gets trimmed 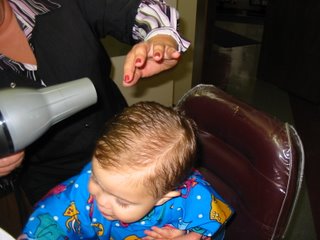 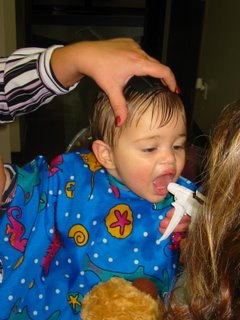 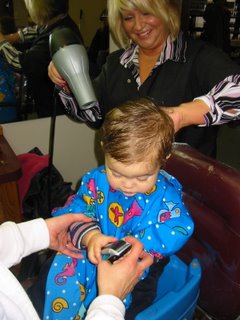 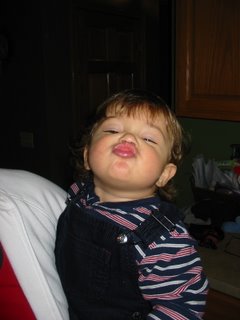 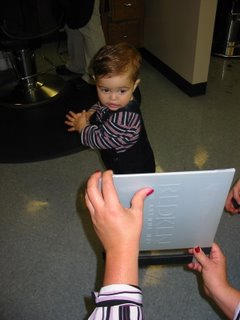 Who is this sharp looking dude? 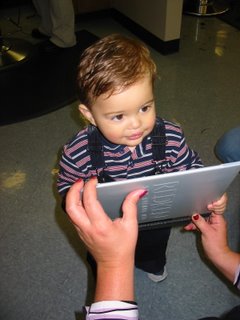 Now that's manly. I'm gonna get all the chicks once I figure out how to sneak out of the house after I go to bed at 7:30.

Legendary actor Jack Palance has passed away. He was 87. But since our friends at colonelt.com beat us to the punch in putting together a memorial, I will now point you to that very site for a great memorial to one of the toughest men EVER. Please, ignore the shirtless Gil Girard portion of the montage.
at 7:06:00 PM Posted by Scott Sabol No comments:

Email ThisBlogThis!Share to TwitterShare to FacebookShare to Pinterest
Many of you are concerned that my son's hair is--as Sniderman put it: "OUT OF REGULATION". I have taken your concerns into account and the issue will be addressed very soon. I'd hate for Nathan to look like Nicholas from Eight Is Enough.
at 11:37:00 AM Posted by Scott Sabol 2 comments:

Email ThisBlogThis!Share to TwitterShare to FacebookShare to Pinterest
Well, it's official. My son is now one of Elmo's little mineons. Just this past Thursday, I walked into the family room and witnessed with my own eyes the final step in converting my son into a follower of Elmo. Knowing that it was too late to save him, I did what any responsible parent would do in a situation like this: I grabbed the camera and snapped this picture so that I have proof of this phenomenon in the event I need it in court when I take the late Jim Henson's company of brainwashing puppets down. 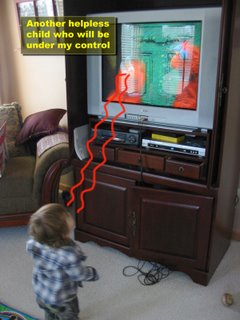