RUSH and the Rock and Roll Hall of Fame 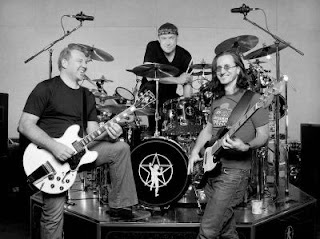 Just a few weeks ago, the Rock and Roll Hall of Fame inductees were announced. Once again, the rock group RUSH was let off...more like screwed for the 8th consecutive year.

Feel free to slam me with the be-all and end-all of all verbal blasts: "STOP LIVING IN THE PAST". My mom is famous for that one as she frequently points out my father's ever-persistant residence in 1958. (The parallels between me and my dad and our subconscious ability to live vicariously around the time of our younger years are frightening as I am finding out as I get older.)

Anyway, I have no idea who the people are that nominate the inductees. But I can assure you that they are clueless.

Look, either you love Rush or you hate them. They never made music that was mushy or mainstream. They created songs that were complex, sometimes lengthy with unique if not abstract melodies containing different movements while alternating time signatures. The lyrics to most of their music especially the songs from the 70s and early 80s might seem emotionless to the casual listener but I argue the contrary. How many rock songs are allegories? Not many.

Their lyrical style shifted in the 1980s to more cerebral topics that explored social issues and metaphysical elements. If anything, the lyrics made you think and appreciate the fact that it was a rock group that composed these stanzas. That in and of itself worthy of something.

Rush has had more consecutive gold and platnium albums than ANY other group in rock history except The Bettles, Rolling Stones, KISS and Aerosmith. That's very exclusive company.

Their lineup hasn't changed for 33 years.

Getty Lee and Alex Lifeson also have numerous awards for their bass and guitar playing.

Many current bands like Metallica, Smashing Pumpkins, Dream Theater and a host of others have included Rush as the band that influenced them.

So forgive me for living in the past. Maybe my taste in music is a bit passe now. I enjoy some of the bands that are popular now. Contrary to what my wife thinks, I'm not completely locked in 1983. All I ask is that Rush be inshrined in rock immortality. An award that they rightfully deserve.
at 6:22:00 PM Posted by Scott Sabol 3 comments: 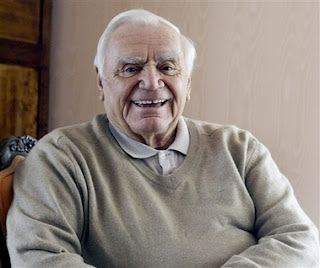 Another great, grizzled, veteran actor has made it to 90. Yes, its Ernest Borgnine--or Ernie as his friends call him. Even though the website imdb.com states his birth year as 1915, I'll go with Ernie himself who says he was born in 1917 not 1915.
Although he is almost triple my age, I remember his role as Dominic Santini. The fiery, bullheaded co-pilot of a top-secret government helicopter in the 80s smash hit Airwolf. Although Jan Michael Vincent, the show's grossly overpaid main character typically stole the spotlight, it was Mr. Borgnine that added that sprinkle of spice that made the show what it was. Either that or his shiny, blue windbreaker he wore throughout the series.
Here's to you, Mr. Borgnine on turning 90.
at 6:06:00 PM Posted by Scott Sabol 2 comments:

Man, I can't stand winter. Ah...let me count the reasons:

Inadvertantly brushing up against your car while getting to work only to find an hour later that your freshly dry cleaned suit pants are now streaked with the salt dust that recently accumulated on your driver side door after the long drive into work.

The talk of global warming as a plausible reason for arctic outbreaks.

The talk of global warming as the reason for my part spontaneously changing late last week.
Forget that I badly need a haircut.

My office doubles as a petri dish full of bacteria incubating and morphing until an unsuspecting employee picks up said bacteria ultimately incapacitating him or her resulting in multiple sickdays watching reruns of The Jeffersons on TVLand.

Get educated about the Web...damnit!

Email ThisBlogThis!Share to TwitterShare to FacebookShare to Pinterest
I don't mean to get too serious about topics but this one is a bit different. I've been meaning to write about the medium that allows me and million other computer geeks to post their thoughts on websites. The World Wide Web--or the "Internet" as many people refer to it although incorrectly (more on that later)--is this medium.


Where did the World Wide Web come from? Did it appear out of nowhere? Did Al Gore create it? The graphical interface--or web browser and all its components--that we all use everyday was mostly created by a man named Tim Berners-Lee. Who in the hell is that you might ask? 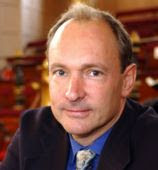 He is a scientist who worked at CERN. While an independent contractor at CERN from June to December 1980, Berners-Lee proposed a project based on the concept of hypertext (those links that you click on when your surfing the web) to facilitate sharing and updating information among researchers.


Fast forward more than a decade...On August 6, 1991, the very first website was put online by Berners-Lee. He made his idea available freely, with no patent and no royalties due. The World Wide Web Consortium later decided that their standards must be based on royalty-free technology, so they can be easily adopted by anyone. In other words, he hasn't made a dime on his invention of the World Wide Web.

Think of these profit figures from 2005 when your ordering something on Amazon.com or Ebay or some other site. Ebay: $4.25 Billion, Yahoo: $1.1 Billion, Amazon: $8.5 Billion. Of the almost $14 Billion in revenue from just these 3 companies, the creator of the World Wide Web gets nothing.


What really annoys me is that most people who have no concept of where all of this internet stuff came from commonly interchange the words "Internet" and "Web" thinking that mean the same thing. Let's straighten this out now. The Internet--a connection via cables between computers--has been around since the late 60s. The four individuals who are credited with the development of the internet are Lawrence G. Roberts, Leonard Kleinrock, Robert Kahn and Vinton Cerf. (Google these names sometime and read all about these guys) 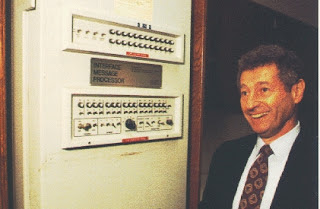 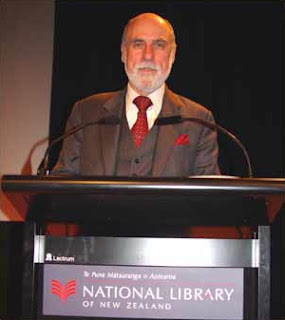 Conversely, the World Wide Web is a global information medium which users can look up information, sendd email or whatever with computers CONNECTED TO the Internet. The Web operates OVER the internet. They are NOT one in the same. Incidentally, this guy below created the usage of the "@" symbol in email addresses.

So when your on your computer checking out the latest news, scores, stocks or buying a record player to play those old 45s, remember the individuals who are responsible for this wonderful technology.


The web is in its infancy similar to where electricity was, say around 1910 or 1920. As much as the Web is used today especially by the younger generation, society as a whole still hasn't embraced the Web. Dare I say, many people are still scared of it even after a good decade of growth. Look how many people don't trust their computer to make bank transactions. But mark my words. In the next 20 or 30 years, we will perceive the Web like we do electricity now. It will be as second nature as flipping on a light switch. Just wait and see!
at 6:36:00 PM Posted by Scott Sabol 1 comment:

Email ThisBlogThis!Share to TwitterShare to FacebookShare to Pinterest
Here we are. 2007 and our 93rd post here at Evening With Sabs. We've had many emails about who won the canned ham over the holidays. The winner will be announced very soon so stay tuned.


In the mean time, I will play the obnoxius parent and give you yet more pictures of my manly toddler Nathan building a chair. 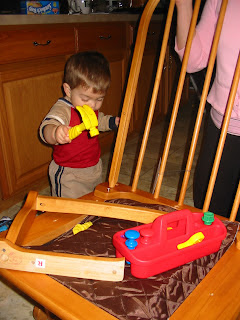 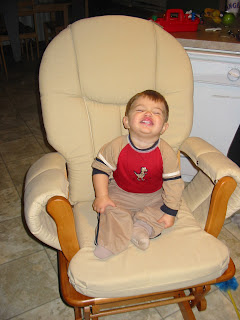 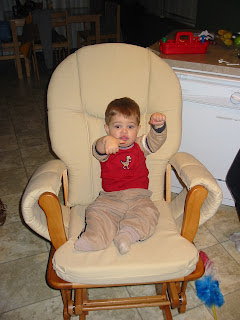