Email ThisBlogThis!Share to TwitterShare to FacebookShare to Pinterest
The article below. The link HERE. 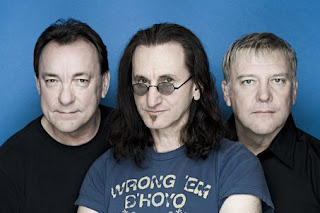 If you have waited decades for the signal to come out of the closet and declare your allegiance to "The Holy Triumvirate," as Jason Segal dubs Rush in "I Love You, Man," consider this your official notice.

After 35 years as one of rock music's most persistent punch lines—the singer sounds like a girl, the songs are long and pedantic, some fans are obsessive, the band is indulgent and Canadian—Rush is suddenly cool.

In fact, even more remarkably, liking Rush is cool.

"You heard right," said TBS sports announcer Chip Caray, grandson of legendary Chicago Cubs announcer Harry Caray. "I'm a fan of Rush, to put it mildly. I tell people, and they go, 'Really?' which is sad. How many hate what they do? [Rush enjoys] what they do. One song goes, 'The pride of purpose in an unrewarding job.' I'm a 44-year-old who quotes Rush—so be it. I'm proud to be a fan, and I don't mind saying it. We're everywhere now."
Recently, the band played a major role on "The Colbert Report"; they have had gushing profiles in Rolling Stone and non-ironic interviews in Entertainment Weekly; they've been a plot thread in "I Love You, Man," referenced on "Family Guy" and effusively adored in the new coming-of-age drama "Adventureland." Later this year, the band will receive a star on the Hollywood Walk of Fame.

But even more notable, perhaps, is that these days Rush is less likely to be a target of snark than reverence. And with reason: The Rushinati have infiltrated the power structure. For instance, the Rushinati control the media: Stephen Colbert is a fan; "I Love You, Man" director John Hamburg and "Adventureland" director Greg Mottola are big fans; Victor Lisle, creative director for WGN-AM (owned by Tribune Co.), will talk your ear off about the grandeur of a Rush concert; Metallica lobbied for Rush's inclusion in the Rock and Roll Hall of Fame during its own induction speech this month; Paul Rudd is a longtime fan, as is Billy Corgan, who, before forming Smashing Pumpkins, honed his chops covering Rush in high school bands.

"The Rush fan is a serious guy," said Mottola, who also directed "Superbad." "He has a fervor in his eyes. I have a vivid memory of a Rush guy doing a drum solo at my high school talent show and taking more time than anyone needed. But Rush inspires that kind of … insistence. They have this unswerving integrity, and it's translated to some fans into a sort of religion."

In Chicago—for decades, one of the band's primary markets—the Rushinati have stayed silent but present. They have held the mound at Wrigley Field (former Cub Matt Clement is a die-hard Rushinati). They are college instructors. They run computers at financial institutions. They own scores of businesses around Chicago, and they have their hands on the world's purse strings.Sterling Smith, 44, a Chicago economic analyst and vice president of trading firm FuturesOne, said he has been a devoted fan since high school—so devoted he routinely attends fan gatherings in the area, gatherings which are attended, incredibly enough, by several dozen like-minded Rush devotees who work at the Chicago Board of Trade. "Talk to any male on the floor [of the Board of Trade] and if they're under 55, I would bet you they're at least 50 percent likely to be a fan. And I think I know why: The Rush fan is a person who values precision and analysis, and the music is often about the rights of the individual—and any of these things would be interesting to someone who trades commodities all day. We're a mathematically oriented group."

Indeed, Alex Lifeson, Rush's guitarist, said he has noticed that fans who grew up with Rush seem "a little more detail-oriented in their professional lives." He said, in middle age, they seem disproportionately made up of engineers, chemists, economists and businessmen."

Just yesterday I got an e-mail from an astronaut," Lifeson said. "A guy up in the space station. He brought a copy of our last album with him into space. I mean, this is amazing. You know how many Rush fans there are within NASA? A lot. I'll leave it at that. And I'm not just talking about the guys out in the field. Our fans are inside, close to the big programs. They run everything."

For Chris Schneberger, 38, who teaches photography at Columbia College, it has been a long road. "I kept [my Rush fanhood] to myself when I was in college," he said. "I admit I always felt a little ashamed by it. For years, I felt like one of those early Christians who would draw a crescent in the sand and wait for someone to come along and draw a fish beside it—to give out a signal that they are part of a brotherhood. But I think I'm at the age now where I have stopped caring."

For Dan Langosch, 42, who lives in Naperville and runs IT for a major bank, to be committed to Rush was "to carry around a chip on your shoulder. They sing songs about the space shuttle. They don't play love songs really. But some of the sci-fi aspects [of the music] faded, and I think, like the band, the fans have learned to relax a little more and deal with real life. But being an outcast is fine."

Indeed, director Hamburg said that when he was thinking of a band to put at the center of "I Love You, Man," it came to "the question of what band would two guys in their late 30s feel a genuine bond over. Rush was ideal because when you meet another fan certain truths are self evident: Neil Peart is the greatest drummer ever, and 'Limelight' is the greatest song. But what I noticed is that fans are coming out of the woodwork, and they don't all look like organic chemistry majors."

Or perhaps we all do.

Everyone is a nerd these days. "We've only had to wait 35 years for this to happen," Lifeson said. Tolkien is mainstream. Comic book movies are the new westerns. And the idea of an 18-minute song called "Cygnus X-1 Book II: Hemispheres" would not seem out of place on a new Kanye album. "To be honest," Lifeson said, "I'm not listening to music like I was when I was in the '70s. And when I do, you know who's really great? I'd rather listen to Radiohead. Everything else—who has the patience?"
at 9:07:00 AM Posted by Scott Sabol No comments: