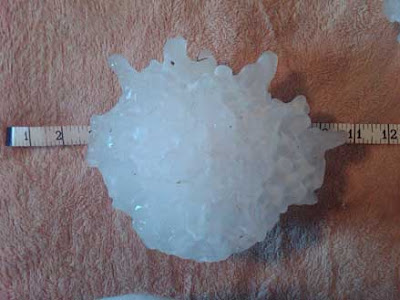 A hailstone found at Vivian, SD Friday night has now been determined to be the record largest U.S. hailstone by weight and diameter.  This 8-inch diameter stone, pictured above, weighed in at an incredible 1.9375 pounds.

The old record heaviest U.S. hailstone was a 1.67-pound monster in Coffeyville, KS on Sep. 3, 1970.  The old official largest diameter hailstone, measuring 7 inches in diameter, was recovered in Aurora, NE on June 22, 2003.

The Aurora, NE hailstone still holds the U.S. record for circumference, however, with a circumference of 18.75 inches.  The Vivian, SD hailstone fell a quarter-inch short (18.5") of that standard.

Leslie Scott, who found the record hailstone, said it lost about 3 inches because he was without electricity for several hours after the storm. NWS meteorologists told him to put it in a sealed plastic bag and stop opening the freezer door to show it to people.


"If I knew it might be a record, I would have looked for a bigger one, " he said. "There was lots of bigger ones than the one I got. My mother seen one as big as a football, she claims."

Hail from the storm led to at least five reports of injuries on Interstate 90, when hailstones crashed through vehicle windshields.  All 55 homes in the town of Vivian were damaged.  One mobile home's roof was punctured 25 times!

"I've got 19 holes in my roof.  Three of them go all the way through my ceiling," said Lisa Patrick, who lives in Vivian.


SOME HAIL FACTS
Large hail is a fact of life in America's heartland. Each spring and summer, we marvel at reports of hailstones the size of baseballs, softballs, or even grapefruit from intense supercell thunderstorms roaming the Plains. Some storm chasers wear helmets when documenting supercell thunderstorms.

TWC Severe Weather Expert, Dr. Greg Forbes (Find him on Facebook ), notes that there have been six other instances of 8-inch-diameter hail in the U.S. since 1950, including a stone shaped like a cigar-box in Izard County, AR on June 19, 1970.


Hailstones this large falling at speeds up to around 100 mph, surprisingly, don't often result in fatalities. This may be due to the relative infrequency of very large hailstones (say, baseball-size or larger) over densely-populated areas.

According to Dr. Forbes, there have been only six U.S. fatalities due to hail alone, dating back to the 1700s. The most recent death was a pizza deliveryman in Ft. Worth, TX on Mar. 28, 2000.

The world's hail capital may, in fact, be in northern India and Bangladesh. A single hailstorm killed 246 people in India on April 30, 1888. More recently, 92 were killed in Bangladesh by an April, 1986 hailstorm.  According to "Extreme Weather", by Christopher Burt, India and Bangladesh witness 10-15 days with hail each year, on average.

The world's heaviest authenticated hailstone, according to Burt, weighing in a 2.25 pounds, pelted Bangladesh in the aforementioned April, 1986 deadly hailstorm.  Its diameter was not recorded.

Unofficially, a hailstone weighing an incredible 4.18 pounds was said to have fallen in Kazakhstan in 1959.  In August, 1958, a 2.14 pound hailstone was documented in Strasbourg, France.
at 7:05:00 AM Posted by Scott Sabol No comments:

Email ThisBlogThis!Share to TwitterShare to FacebookShare to Pinterest
Lebron James announced he was heading to the Miami Heat for greener pastures.  The decision wasn't that surprising.  It was the way the announcement was made that has irked most fans.

Yet there are so many points to consider when reacting to the news.  Here are a few that I've considered since I found out where he was going:

Point #1:  The whole 5 day period leading up to his announcement was handled poorly to say the least.  LBJ could have made a statement about his future without calling ESPN, creating a one-hour special to do so.  There is a difference between being confident and blatant arrogance.  If he would have announced his departure without fanfare--sure, it would have been tough to digest as a lifelong Cleveland fan--yet it would've been the classy way out.  Cleveland is a blue collar town.  Fans deserve better after supporting him.


Point #2: LBJ should have called Dan Gilbert before making his decision.  It would have brought class to a very touchy situation.  Instead, he announced his decision to leave Cleveland in Connecticut of all places.  Stand on a podium at the "Q".  Thanks the fans, the team, the owners and calmly address the local media, answers questions about your decision.  Handle the situation in a way that doesn't slap the fans of Cleveland in the face.

Point #3: I don't think that this is as bad as Art Modell leaving Cleveland.  Lebron didn't sneak out in the middle of the night....although it seems close only a few hours from hearing the news.

Point #5:   Dan Gilbert, incredibly upset as he might be, should have waited to comment and let the dust settle.


Point #6:  Ever notice that the players who have rings/championships don't care about their branding?  Say what you want about Kobe Bryant.  He could care less about his brand or about how many shoes he sells.  He cares about winning championships and nothing else.

Point #7:  I firmly believe that LBJ controlled more of the Cleveland franchise than what was originally said over the last several years.

Point #8:  All of these NBA players re referring to themselves in the third person.  I thought only Rickey Henderson did this.  I don't remember Michael Jordan or Magic Johnson handling questions self-glossing themselves as if they are the center of the universe.

Question #1: The big question we all have to ask ourselves:  Would LBJ have a better chance to win her in Cleveland given the player we have?

Question #2:  Prior to his leaving, did the Cavaliers have the players necessary to make a blockbuster trade to take the team to the next level capable of contending for a title with the likes of the LA Lakers and Boston Celtics?

Question #3:  Even with LBJ here in Cleveland, would that have been enough to attract top-tier free agents now and in the years to come?

Question #4:  What Cleveland team has the best chance of winning a championship now?
at 6:10:00 AM Posted by Scott Sabol 2 comments:

Tropical Storms in Ohio in July? 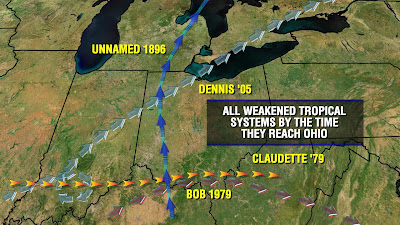 So far, hurricane season has been quiet...for now.  It will heat up very soon.  For the latest tropical forecast, click on this link above the forecast picture.

We are in an upward trend for hurricanes. This began in 1995 and will continue for quite sometime.  Hurricanes that make landfall along the east coast in these upward trends also increases.  Take a look at this map with the circles representing Ohio vacation hotspots.  Although this doesn't mean that the east coast will encounter a hurricane directly, it just means that the chances are much higher. 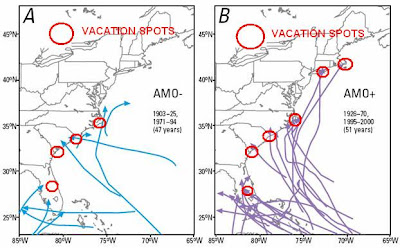 How about the months ahead?  The peak month for hurricanes is September, usually the first week and a half.  So if you are planning a vacation in late August or early September, stay up to date on the latest hurricane outlook because your chances of being affected by a hurricane or tropical storm increases greatly. 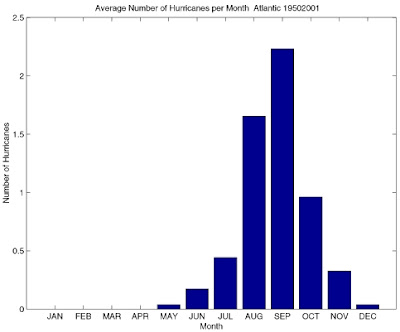