The Last Push of Winter Ahead

Email ThisBlogThis!Share to TwitterShare to FacebookShare to Pinterest
Its been a rough winter for Northeastern Ohio.  Almost 60 days with highs below freezing. More than 80 days with snow on the ground. How about an end?

Well not quite.  The overall pattern of colder air pushing south hasn't really let up.  With the exception of a few brief respites of 50 and 60 degree days over the last few weeks, the winter has been consistantly cold.

Last April was one of the warmest on record.

Now the details on what we are expecting for the rest of this month and April:

This winter has featured a strong La Nina.  This means that the Pacific Ocean temperatures closer to South America have been well below normal. 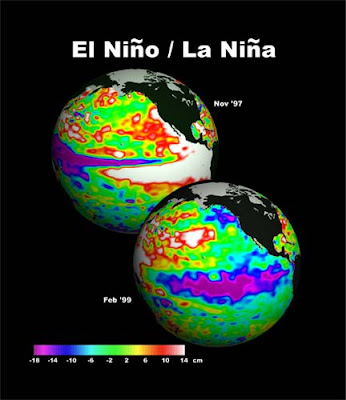 This shifts the jet stream over North America so that it drives cold fronts in from Canada.

This continued into early March.  Now that La Nina is finally weakening, the jet stream is backing off. This has allowed for warmer than normal air to push north into Ohio over the last few weeks. 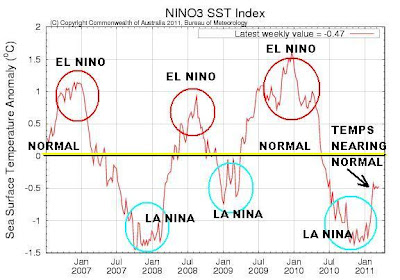 Now, the long range outlook is for the La Nina pattern to reestablish itself one more time. Look at the temperature trend compared to normal for the first few days of April.  Its still trending a bit below normal.

Heading into early April, the temps will probably not venture much above normal which is nearing 50 by Apri 1st.  Expecta continued cool and wet spring.

A Brief Explanation on NEUTRONS and NUCLEAR POWER

Email ThisBlogThis!Share to TwitterShare to FacebookShare to Pinterest
In school, I remember chemistry being easy to comprehend. Not to oversimplify the science but we mixed chemicals which we could smell and see and voila!  You get some totally different compound with hopefully some fire.  After all, what is chemistry class without fire.

Chemistry reactions result as elections change positions with other electrons with other atoms or molecules.  Physics reactions dive deeper.  The world of physics is much harder to conceptualize because the reactions that define this science occur at the level of the atom. In broad terms (not entirely accurate), an atom looks something like this:  Electrons orbiting around a nucleus of protons and electrons. 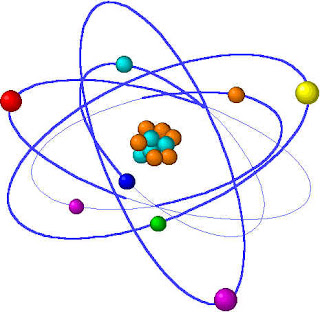 What is the particle that is responsible for nuclear reactions?  It is called the NEUTRON.  It resides inside the nucleus.  It wasn't discovered in 1932.  By 1942, it was used in the first nuclear chain reaction. Neutrons are very small.  You could fit more than 66 TRILLION NEUTRONS end to end on a meter stick.

The force that holds this ultra-small particle in the center contains billions and billions of times MORE POTENTIAL ENERGY than everyday chemical reactions.  Its even stronger than GRAVITY! This is what makes nuclear power so attractive.

Our mind has a difficult time quantifying these changes because these reactions don't occur in our macroscopic world we observe each day.  it isn't until the byproducts of these reactions become a danger in our world we live in.  Unfortunately, the potential meltdown of the nuclear reactors in Japan and the explosions on the news have provided the framework for observation and criticism for all of us not familiar with nuclear technology.

The fuel that is used in nuclear reactions, believe it or not, occurs in nature.  Uranium is a naturally occurring radioactive element.  It exists in several types. Uranium 235 and 238.  The numbers indicate the number of NEUTRONS IN THE NUCLEUS.

In a nuclear reaction, the uranium is hit with a neutron.  The collision create tremendous amounts of energy, other elements (Krypton-92 and Barium-141) and MORE NEUTRONS which feed the reaction further.

Comparing TSUNAMIS from OTHER EARTHQUAKES

Email ThisBlogThis!Share to TwitterShare to FacebookShare to Pinterest
Its interesting to watch how these tsunamis have propagated across the oceans of the world after some of the historic earthquakes.  As these maps indicated, the tsunami that hit Japan was not much different in extent than some of the others that originated from historic quakes of the past.  Working backward, we start with the most recent quake in Japan on March 11th 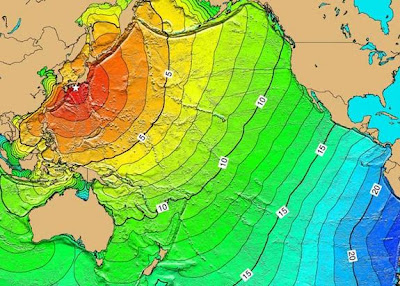 Next is the Chili quake from 2010.  The image has greater detail and the color table is a bit different than the other images 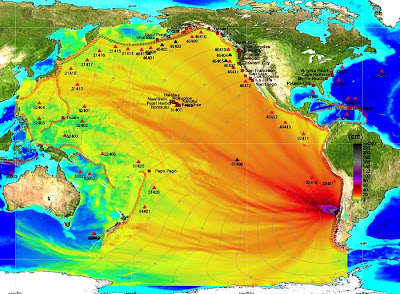 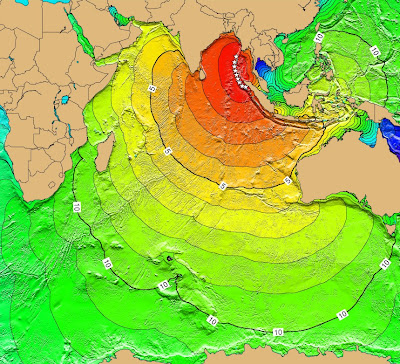 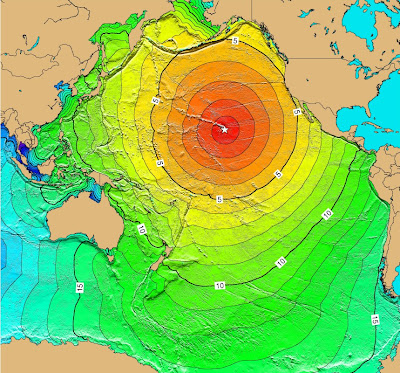 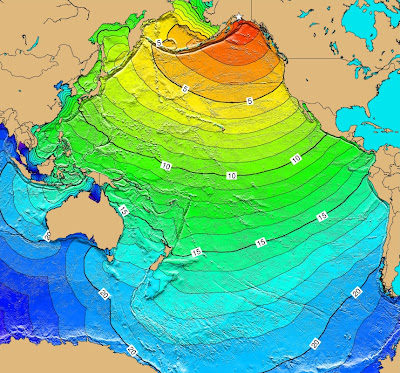 1929 quake in eastern Canada. Tsunami in the Atlantic Ocean. Magnitude: 7.2 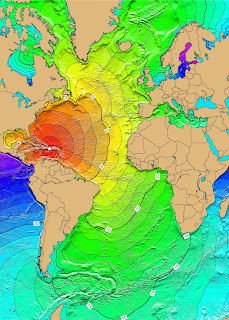 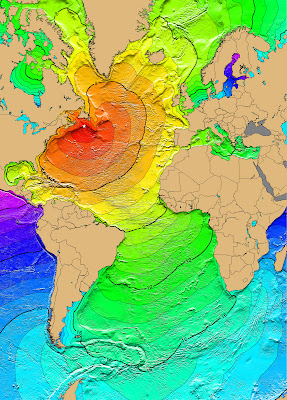 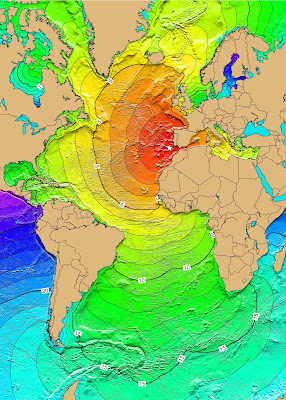 Email ThisBlogThis!Share to TwitterShare to FacebookShare to Pinterest
The nuclear power plant catastrophe in Japan and the potential for a reactor meltdown has forced the US to look domestically raising the question of whether or not our nuclear plants are able to withstand earthquakes of a  magnitude 9.0 or other natural disasters that--prior to Friday--seemed at most a distant concern.

The United States is dependent on nuclear power just as Japan and other countries.  In order to take our nuclear power plants off-line to upgrade safeguards and structural elements, it would be difficult to make up the difference in loss of power generation.  While we are more dependent on coal/gas/oil, nuclear power is more prevalent in our country than what we hear in the news even here in Northeastern Ohio.

The Japanese use of nuclear power for electricity is significant but not as much as you might think given the video and pictures you see of the situation after the quake and tsunami.  37% of their energy is from nuclear power. 63% from fossil fuels and other sources. 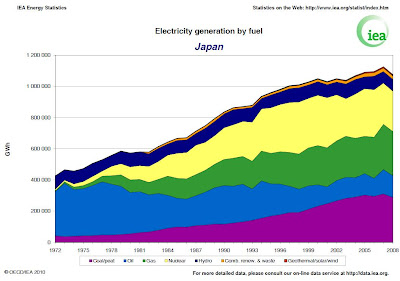 How much electricial generation in the US is from nuclear power compared to other fuels?  We are far more dependent on Coal and gas than nuclear power. Yet our nuclear power produces 20% of our electricity. 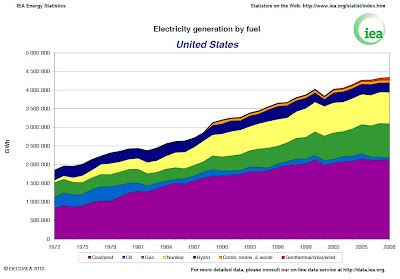 What about France?  Yes, France.  They generate MORE POWER THROUGH NUCLEAR POWER PLANTS THAN ANY OTHER COUNTRY.  MORE THAN 75% OF THEIR ELECTRICITY IS FROM NUCLEAR REACTIONS! 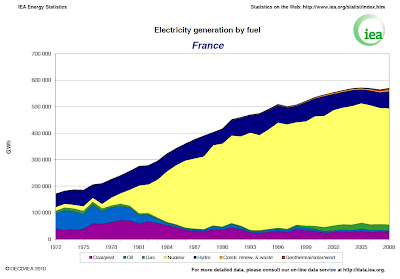 Email ThisBlogThis!Share to TwitterShare to FacebookShare to Pinterest
Yet another natural disaster which is captivating the world.  The earthquake in Japan which measured a magnitude 9.0 (revised) was the strongest in history for Japan. 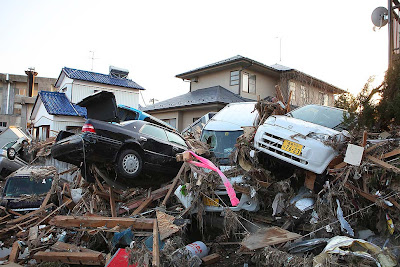 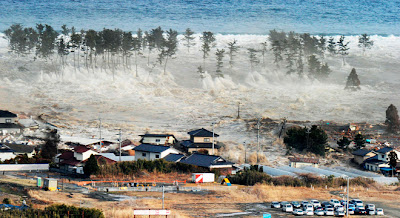 Since the 9.0 on Friday, Japan has experienced more than 300 separate "aftershocks".  See the location of the quakes from Friday morning until early Sunday evening. 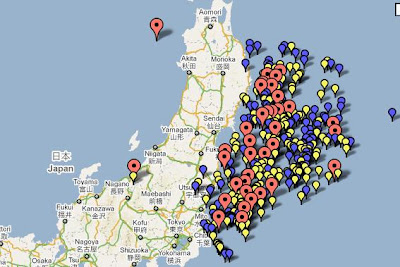 To put that into perspective, most of these aftershocks have been stronger than the quake that rattled NE Ohio and surrounding areas back on January 31, 1986.

From the Ohio Seismic Network:  "Back then, destruction in the epicentral area was mostly minor. Merchandise fell from store shelves in Mentor, Painesville, and Chardon and buildings in these communities experienced varying degrees of cracked plaster and cracked or broken windows. Chimneys are particularly susceptible to damage or destruction from ground motion associated with moderate to strong earthquakes. There was, however, only one confirmed report of a chimney being toppled."

Earthquakes are measured with the Richter Scale. The Richter is "logarithmic" meaning that the increase goes up fast as the scale goes up.  So a magnitude 6.0 is 10 times as powerful at a 5.0.  A 7.0 is 100 times as powerful than a 5.0 and so on.  To put this into perspective, the quake that hit Japan was more than 10,000 TIMES MORE POWERFUL than the quake over Northeast Ohio back in '86! 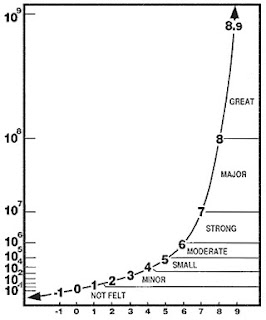 So why all of these quakes?  Is anything different going on recently?  To better get an understanding on earthquakes, lets look at the area we call "The Pacific Ring of Fire".

The Ring of Fire is a battlezone between several "plates" that make up our continents. Keep in mind that the area of the earth where the continents plates reside is the top 25 miles or so.  These plates "float" on the hotter, more liquified inner portion of the earth. 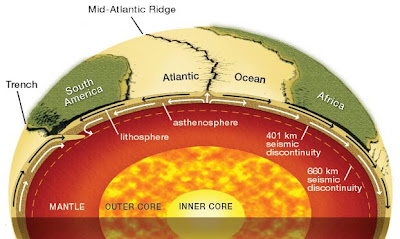 Each one of these plate "rubs", subducts (or dives under) the neighboring plate.  When the friction between each plate gets to great, it causes an earthquake. Below is a cross-section of the Juan De Fuca Plate and the North American Plate which is responsible for the west coast earthquake activity. 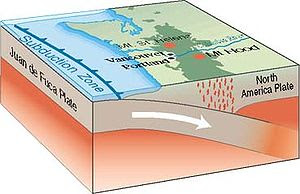 Where these plate converge, volcanoes also form as the plate push up the crust. 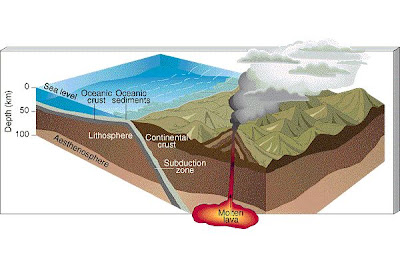 Over millions of years, volcanoes formed along the Ring of Fire. 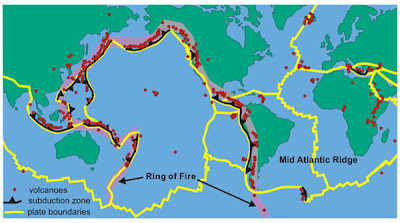 The earthquake activity from late Friday until late Sunday evening along the ring of fire.  This accounts for more than 90% of the global quakes. 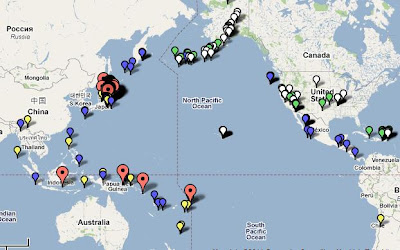 If earthquakes occur under the ocean floor along one of the faultlines as the plates push up on the ocean, it can cause a ripple effect as it displaces the water above.

Since the tsunami (or seismic sea wave) occurs so far under water, the wavelength of the tsunami is very long.  In most instance, it can measure more than 200 miles from crest to trough.  This is why if your in a boat in the middle of the ocea, you won't much of a change. As the wave get closer to land, the wavelength gets shorter, the water gets higher. 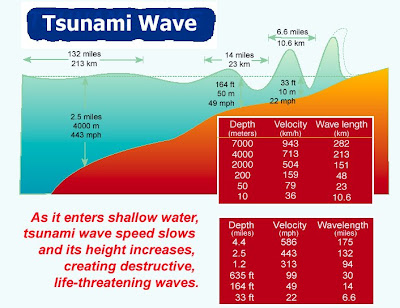 These seismic sea waves can travel across the entire Pacific Ocean at speeds of more than 200 miles per hour.

The National Oceanic and Atmospheric Administration released a projected wave heights map for the Pacific Ocean. The area that is effected is enormous! 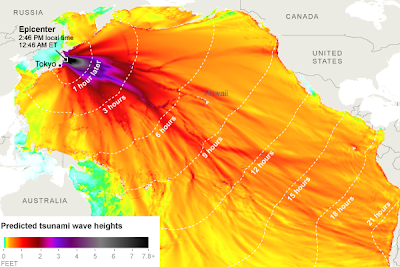 The impact of the tsunami was fast. The travel times are below. 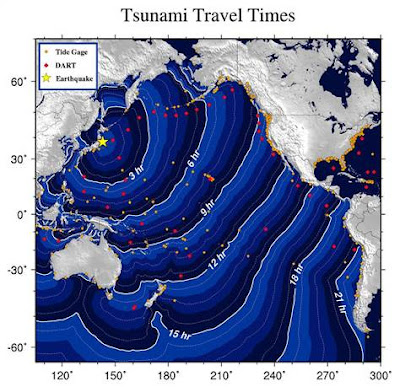 More updates as the nuclear reactor may meltdown.....
at 8:40:00 AM Posted by Scott Sabol 1 comment: