Why the increase in SEVERE WEATHER this spring?

Email ThisBlogThis!Share to TwitterShare to FacebookShare to Pinterest
UPDATE 4/28/2011:

Yesterday will go down as the worst tornado outbreak since the Super Outbreak in 1974 which included the Xenia tornado in Southwest Ohio.  Here is roofcam video of a mile-wide tornado that went through Tuscaloosa, Albama.

The final tornado and fatality numbers will be adjusted as the official survey the damage. Here is a look at the storm reports. The tornado reports are highlighted in red.  More than 160 IN JUST ONE DAY. 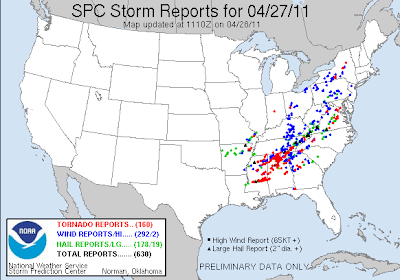 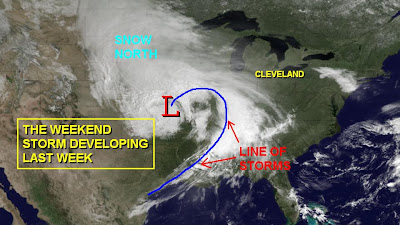 Why the sudden increase in severe weather? Is it Global Climate Change?  Is it natural climate shifts?  Probably a mixture of both...The driver we will focus on is the role the Pacific Ocean plays inour weather patterns here in Northern Ohio.

The ocean temperatures go through cycles warm and cold, wet to east. This year, the ocean water temperatures are warm west and cold east near South America. This is called LA NINA. Here is an animation of the current ocean temperatures compared to normal. Notice the blue shades east.

This cooling east and warming west causes storms to develop west near Australia.

The ups and downs in the atmosphere causes the jet stream to change causing it to dive into the Great Lakes and into Ohio. Notice the "wet" green area in the Ohio Valley and the shades of red in the deep south. 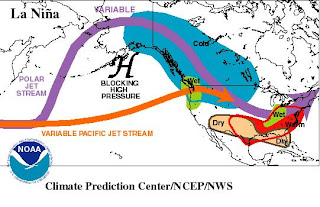 Our rainfall in Northeastern Ohio has been well above normal this month. 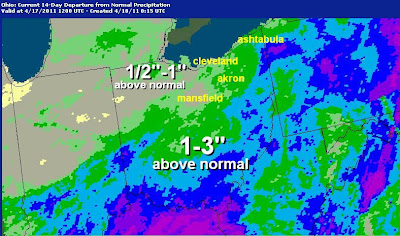 Last year (2010), La Nina hadn't kicked in.  While we did have tornadoes in Ohio (the first graphic below showing locations and intensities last year), the country had far less tornadoes overall compared to 2008; another LA NINA YEAR! 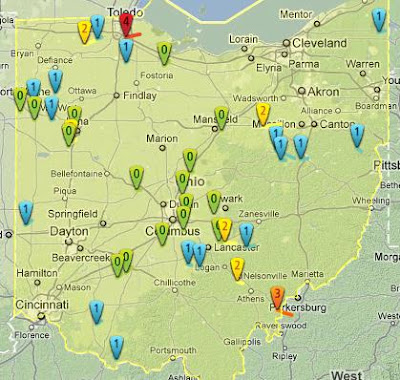 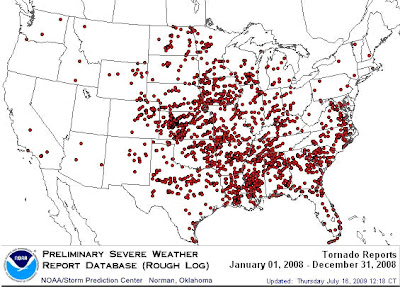 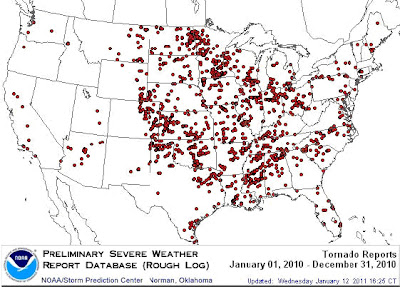 "LA NINA" springs tend to feature greater than normal numbers of tornadoes.  The graph below shows the frequency of F4 and F5 tornadoes compared to LA NINA and EL NINO years. The LA NINA numbers are shown in the red.

Can we expect tornadic weather here in Cleveland and Northeastern Ohio this spring and summer?  Eventually yes.

Here is a loop of the storm reports for the first two weeks of June 2008, a year similar to 2011 when comparing severe weather. Notice the severe storms are further north than the recent outbreaks.

So as the temperatures rise, expect our severe weather chances to increase across Ohio into June and July 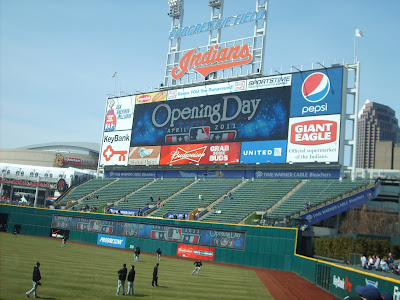 Weather and baseball are two of my passions since childhood.  I can't remember the first time I really had a genuine interest in atmospheric science.  I've been swing a baseball bat ever since I could pick one up when I was 2 years old.  The time between seasons is kind of a let-down.  Continuous cold bouts here in Cleveland coupled with unpredictable lake effect snow events with countless "Alberta Clipper" snows (fast moving cold fronts from Canada) make the months of November, December, January and February slow to a crawl.


As Opening Day neared this year, I was tossing around several ideas on combining weather and baseball into an article. The weather has been cold.  Fans dream of a far off day when the temperatures get to a tolerable level--anything above 40!   Then it hit me:  Has anyone performed a correlation between Opening Day and record high temperatures?  If not, then now is a good time considering most of the eastern half of the country has experienced below normal temperatures from early December to late February.  People want warmth and they want it now.  Why not go for the extreme! Check out how much of the country has been below normal this winter... 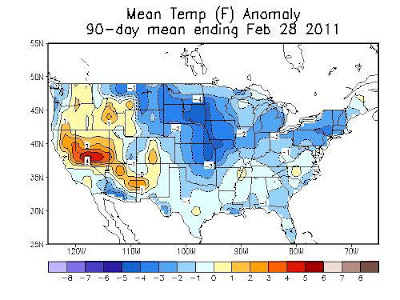 Many historical articles on weather and baseball have been written for sure. Yet not many on Opening Day, Baseball and Record High Temperatures. More specifically, have we ever broke a high temperature on Opening Day in ANY GAME?

I first narrowed my search to teams that have a history that goes back to the early 20th century.  The final list of teams were:  BOSTON, CLEVELAND, DETROIT, CINCINNATI, NEW YORK, ST. LOUIS, PHILADELPHIA, CHICAGO AND ATLANTA (Including Boston Braves). I chose the Cubs versus the White Sox since there history goes back further.  I also threw Atlanta in the list due to their southern latitude.

All 9 teams have played in 1108 games on Opening Day at their home ballpark through 2010. 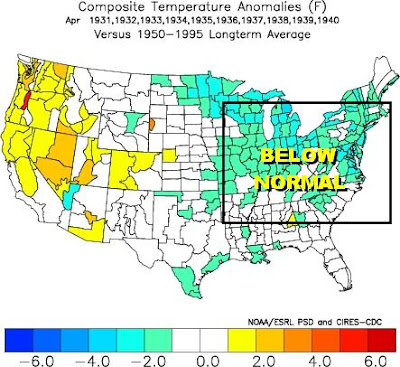 How about the warm decade of the 2000s according to NASA?  Also, not the case. Just one record high temperature was reached in the 2000s. 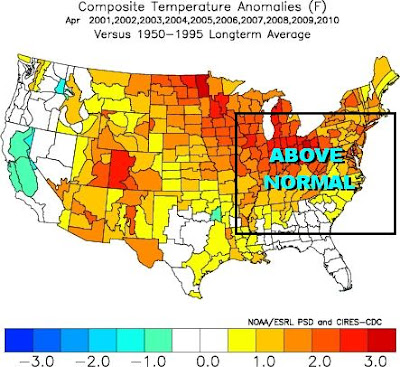 The chances of breaking a record high temperature on Opening Day in your home ballpark is more luck of the draw. It only happens 0.7% of the time.  I'll take those horrible chances than another Opening Day 2007 at Jacobs Field:  Snow, wind, temperatures in the upper 20s. 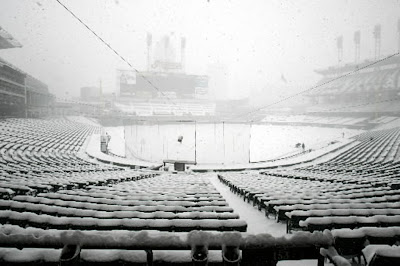