The Next 5+ Years of MLB Hall of Fame Voting

Email ThisBlogThis!Share to TwitterShare to FacebookShare to Pinterest
Under the most basic of circumstances, predicting hall of fame voting of any sort is a futile exercise.  Yet the upcoming 5 years or so of MLB Hall of Fame voting will feature players that played in an era that was anything but "basic" or "normal" when compared to the historical mean.

This crop of retired players who are or soon will be eligible for Hall of Fame consideration played between the early 1990s and mid to late 2000s.  This era is so heavily associated with performance enhancing drugs that some want the statistics for these 10 to 15 years to be either rubber-stamped with asterisks or completely eradicated from all historical record.  Ultra traditionalists go so as far as branding this era as immoral and unethical.  "Purge the inflated numbers like the contagion they are!", some cry.  Anyway, you get the point that this is still fresh in people's minds 7-plus years after mandatory drug testing was implemented.

Which brings me back to the Hall of Fame. Starting next year, more and more players will be on the ballot from the 1990s era.  So here is what I think the voting will look like from 2012 to 2017.  There is nothing scientific about my methodology although I tried to take into account the typical voter's "passionate" viewpoint on the players in question. The only prerequisite is that I started with the Top 10 vote getters in 2011 as the starting list in 2012.  Here is what I came up with along with a few carry-overs from year to year.

You'll notice that I don't have Schilling or Pedro Martinez voted in.  Not because they are not deserving but because they're are other players who I believe will be voted before them.

Legitimate hold-overs from 2012 who have a good shot:

High Temperatures above 95 since 1980

Email ThisBlogThis!Share to TwitterShare to FacebookShare to Pinterest
This graphic tells it all.  Most of these days occurred in the drought summer of 1988. We should easily make it above 95 today.  Already 90 and its only 11AM.

Email ThisBlogThis!Share to TwitterShare to FacebookShare to Pinterest
We are in the midst of our first heat wave across northern Ohio.  Temperatures will stay above 90 for several days until the heat pushes back to the west late this weekend.  Is this type of heat across the country common or a rarity?  Below is a plot of temperatures compared to normal for JUNE 15th through JULY 17th for each of the last 20 years starting with this year.  Warmer colors indicate temperatures above normal.

Check out 1998 and 1994.  The heat looks very similar to what has been going on most of this summer.

Email ThisBlogThis!Share to TwitterShare to FacebookShare to Pinterest
Today was a very busy day on multiple fronts.  First shortly after the start of the 4:30AM show, the news server went down and went down hard.  Without going into too many technical details, you only need to know that we had no video, no audio, no stories, no flashy animations.  Basically, the anchors had to read the news on camera for several hours. In between stories, they dutifully filled the space with clever banter sometimes hinting at the difficulties of the morning.  Needless to say, it was an exercise in mental toughness not only for the anchors but for the producers and countless other behind-the-scenes people who painstakingly found ways to get the long show on the air.  Of course, inclement weather such as flooding and storms make the show a bit easier to produce.  When all else fails or you run out of options, toss it to the weatherguy, right?  Today though, it was out of necessity and it was actually necessary.  Bottom line, all worked out fine.  The shows went off surprisingly smooth.  As of this writing, the server is almost at 100%...maybe not. 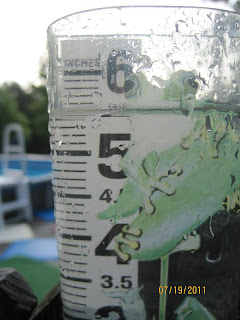 Back to the flooding and storms.  A cluster of storms/heavy rain began to develop over the lake around 11PM.  By 2PM, it had dropped an inch of rain in Cleveland.  By 9AM, more than 6 inches of rain fell in some areas in southern Summit county, northern Stark county. A few reports near Strongsville also reported around 6 inches. 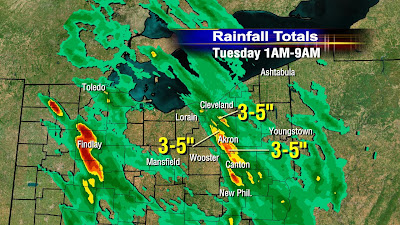 The lightning around 4:30AM was equally as impressive 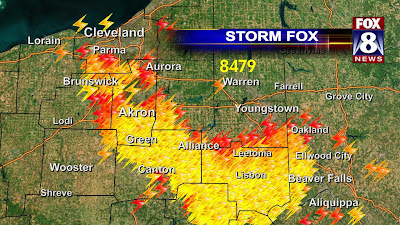 Heat is heading for Ohio..But For How Long?

Email ThisBlogThis!Share to TwitterShare to FacebookShare to Pinterest
I was "off the grid" for a week and a half resting and spending time with the family.  In the midst of some badly needed R&R, the heat in the center of the country has slowly expanded north and slightly east.  So far, Northeastern Ohio has only had 5 days above 90 through July 17th.  As the heat slides east this week, it isn't a question of weather or not we hit 90 but how many times. 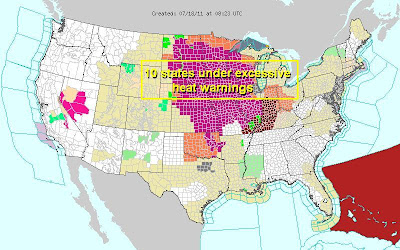 The 100+ degree heat is almost to the Canadian border 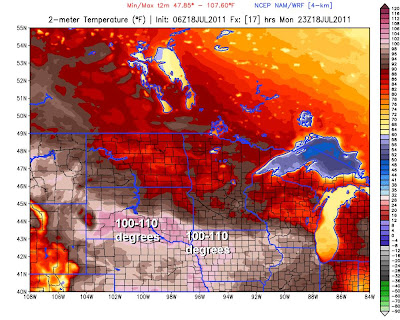 ...and south into Texas 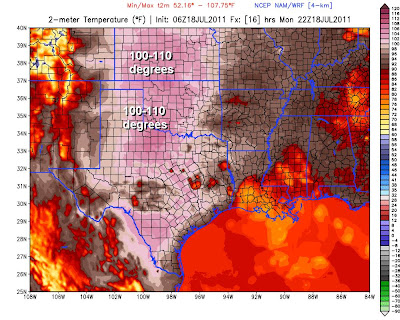 Heat index readings of at least 120 will be common 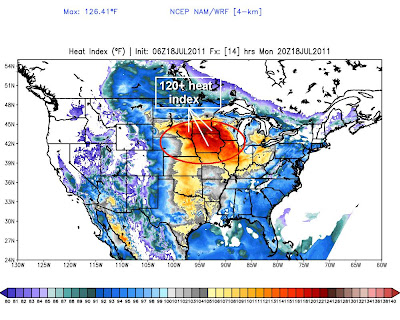 The forecast high temps for all of us in Northeastern Ohio are still high...and climbing by the end of the week. A few storms might reduce the temps a bit but not much 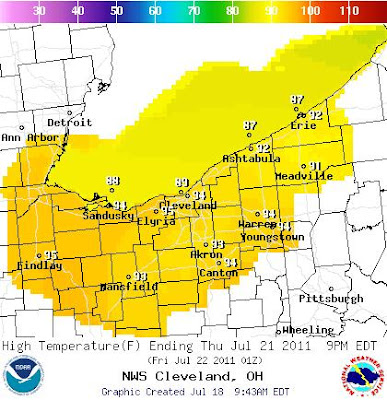 The "heat ridge" is still strong as show below 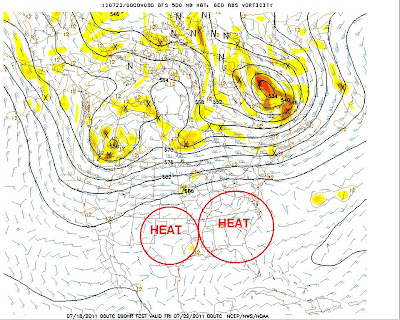 By early next week, the projections pushes the heat back west which should allow daytime highs to stay in the mid 80s for most of northern Ohio.  So if you are getting married next week or if you are finishing up baseball season or heading out for "two-a-days" for football, the oppressive heat should not be as much of a problem 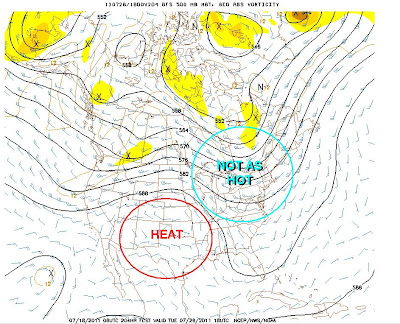 Are 450 foot homers a thing of the past? 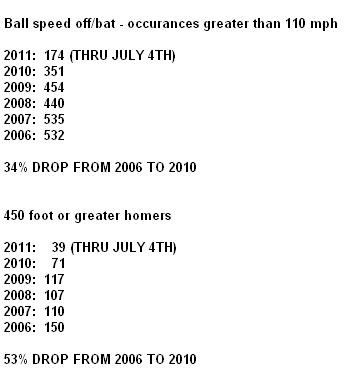 Remember the cool summer of 2009? Arctic Oscillation was historically low

Email ThisBlogThis!Share to TwitterShare to FacebookShare to Pinterest
Two summers ago was cool compared to this and last summer.  The arctic was responsible for that abnormally "not hot" summer.  More on the rest of this summer later this week! 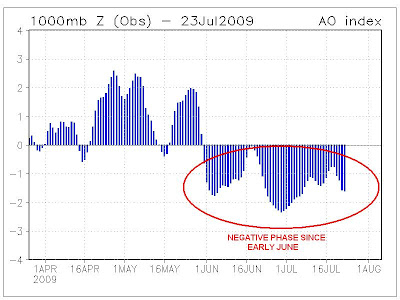 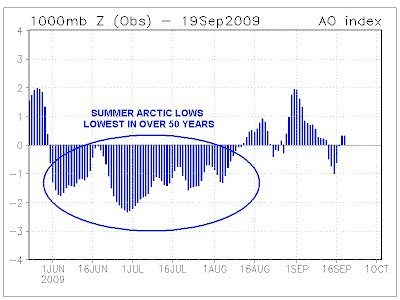