Email ThisBlogThis!Share to TwitterShare to FacebookShare to Pinterest
For all of the talk concerning Irene being blown out of proportion, areas from New Jersey to New England are still under water. Hundreds of thousands of people are still without power.  The bottom line: Never underestimate hurricanes. 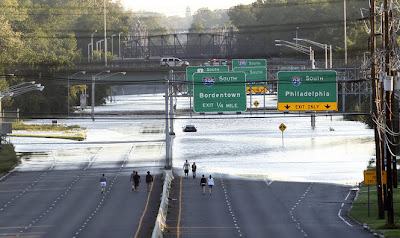 We are entering the peak hurricane season

All eyes are on the eastern Atlantic where another tropical system is in its infancy. 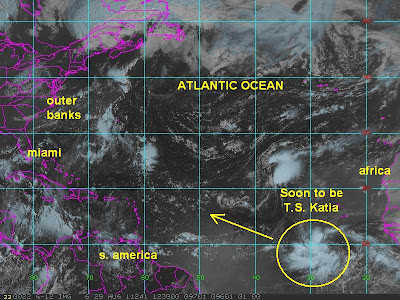 The question remains whether or not this "soon to be" hurricane (by Thursday) will take a similar track to Irene.

Here are several different projections: You can see the "blob" in the center by Sunday 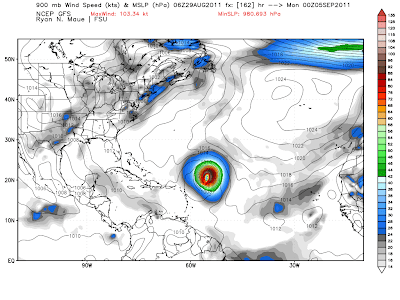 Here is the projection by NEXT THURSDAY (10 days away). The projections take the hurricane north and away from land next week. 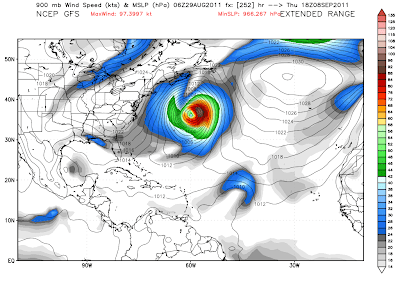 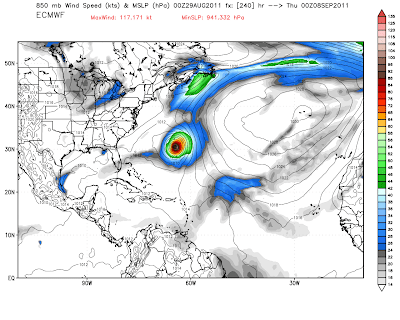 So if you are heading to Disney over the next several weeks, watch the tropics. Its going to get real bumpy.
at 11:12:00 AM Posted by Scott Sabol No comments:

Hurricane Irene Could Another Katrina!

Email ThisBlogThis!Share to TwitterShare to FacebookShare to Pinterest
I pointed out last week that the US was more than likely going to get hit with a major hurricane. While the projections at the time pointed to Florida (projections that far out are shots in the dark) the overriding theme was to prepare for a major hurricane sooner than later.  Then earlier this week, as I pointed out in my most recent post, then Tropical Storm Irene was showing signs of hitting the east coast and possibly New York City.  Now, Irene is a category 3 hurricane with winds of 115 mph with a northerly movement. I'll be posting updates on my FACEBOOK FANPAGE which sends updates to my twitter page. 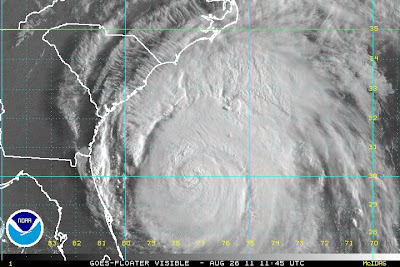 The 1938 hurricane rainfall totals were extensive. Irene could mirror these totals.

Should this hurricane hit anywhere from NYC to Long Island as the projections have been indicating over the last 24 hours, the cost could be mindboggling.

Nate Silver, a statistician who has a column on the New York Times website called fivethirtyeightblog calculated what the cost would be if a hurricane hit New York City. His results are mindnumbing: 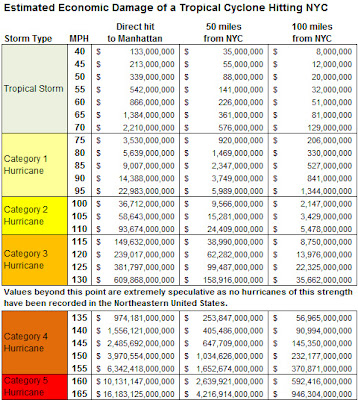 The bottom line is that this hurricane could be another Katrina OR WORSE!  The economic impact will be long lasting.  Gas prices for us will shoot up!  Cost of food will climb.  The financial markets will be hit hard.  If this happens, the cost will be felt by EVERYONE!
at 8:25:00 AM Posted by Scott Sabol No comments:

Hurricane Irene - Soon to be an East Coast Reality

Email ThisBlogThis!Share to TwitterShare to FacebookShare to Pinterest
If you read my post from last week, many meteorologists including myself were predicting a dangerous hurricane to develop in the Atlantic with a high chance of it making landfall along the east coast of the United States. The computer were showing this more than 10 days in advance. Predictions that far out are often times "shots in the dark". This time, it was right on the money.

If you are vacationing anywhere from the east coast of Florida to Savannah & Hilton Head especially Myrtle Beach/Wilmington, N.C. and the Outer Banks (my vacation spot from when I was a kid), remember that this storm will pack winds of 120+ mph along with a powerful storm surge.

Residents along the SE coast are used to the threat of tropical systems, not areas from Cape Hatteras to New York City.  Yet the threat of a Hurricane making landfall near New York City is real.  Take a look at just a few of the hurricanes that made landfall around New York City.  Notice that most of the tracks look similar to Hurricane Irene. The first one in the list is an old weather map drawn on the day of the NYC hurricane in 1893 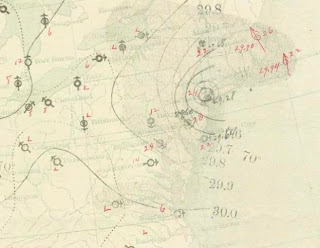 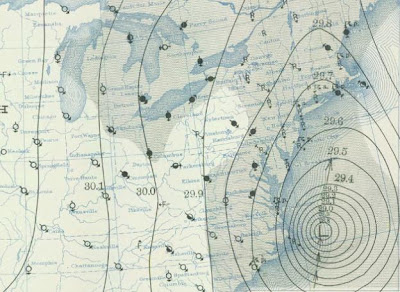 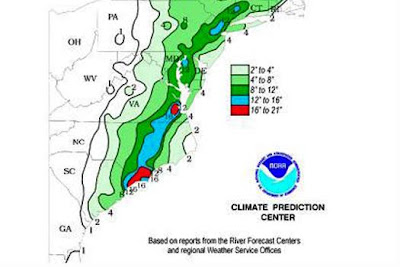 Email ThisBlogThis!Share to TwitterShare to FacebookShare to Pinterest
So far this year, hurricane season has been very quiet. A few storms developed in the central Atlantic. Those storms didn't last long.  But notice the storm track. The steering currents have curved each storm to the northeast. 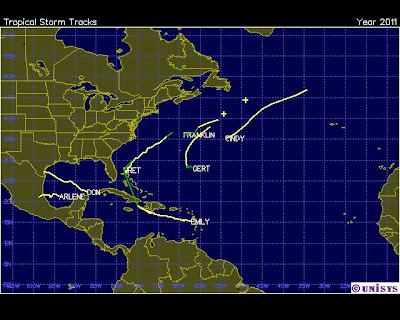 The focus of attention in the weeks ahead will be over the Caribbean and Gulf of Mexico. While no storm (as of this writing--August 18th) has developed yet, all of the computer projections show rapid development of one area of storms into a formidable hurricane late next week

We look at 3 distinct projections.  The GFS model, the Canadian model and the European Model. 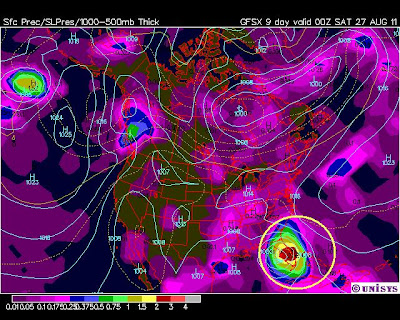 The Canadian Model shows the same hurricane near the Carolina coast 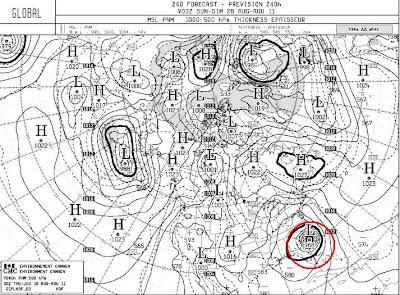 The European Model shows it near Florida 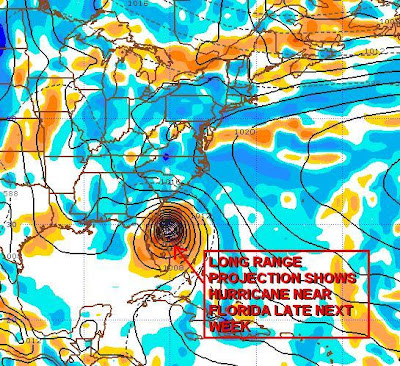 Whether or not this actual verifies remains to be seen. The bottom line is that the computer are seeing the tropics becoming very active very soon and very fast. Based on a multitude of factors, I believe that the US will be hit with a hurricane at some point this season. Stay tuned!
at 6:35:00 AM Posted by Scott Sabol No comments:

Players Aren't Seeing the Pitches They Used To

Here are the number of players over the last 10 seasons who were pitched 60% fastballs or more. Other pitches and their percentages follow. 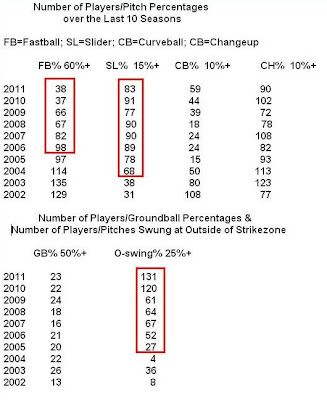 Notice that the number of players who saw 60% fastballs has seen a THREEFOLD DROP since 2006. Players who saw more than 15% of their pitches as sliders have steadily increased since 2004.  Curveball percentages saw a drop then an increase the last 3 seasons while changeup percentages have stayed fairly steady throughout.

The bottom line: Pitching overall is getting better.  Batters are getting fooled more than they did just 5 years ago.
at 9:14:00 AM Posted by Scott Sabol No comments:

103 movies so far...here is the list in no particular order

Email ThisBlogThis!Share to TwitterShare to FacebookShare to Pinterest
Inception
Get him to the Greek
The Other GUys
Restrepo
Winter's Bone
Despicable Me
The Green Zone
Dr. Strangelove/Atomic Bomb
The Atomic Cafe
The Kids are Alright

I Love you Philip Morris
The Fog of War
Collosus: The Forbin Project
The Black Swan
Idaho Transfer
Megamind
The Fighter
Eraserhead
Winnebago Man
The Wind that Shakes the Barley

Into Eternity
Unknown
Paul
at 8:26:00 AM Posted by Scott Sabol No comments:

Random Weather notes, the tropics and the heat

Email ThisBlogThis!Share to TwitterShare to FacebookShare to Pinterest
August is here. 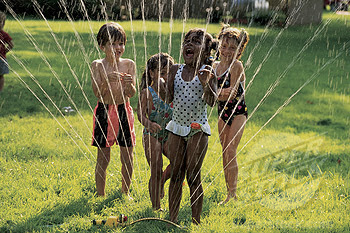 Summer is going fast.  Yet there is alot to talk about weatherwise as the summer peaks and hurricane season continues to rapidly develop.  So this post on Scott's World of Weather will be a hodge-podge of topics.

First, my 90 degree prediction of "7 days".  Yep, it went up in smoke a week and a half ago.  There were several reasons for my busted prediction.  The first was the over-emphasis of the massive spring rainfall.  We had the wettest April/May period on record.  Usually, wet ground keeps high temperatures down a bit.  This did happen in the spring and early summer (June).  Average temps (day and night combined) in June were a notch below 70. For comparison, the 10th coolest month was June of 1902 with an average temp of 62.  We did have one day above 90 on June 4th.

The second reason was the underestimation of the strength of heat ridge in the middle of the country.  The La Nina winter/spring we had had a cooling effect on the atmosphere across the country.  Droughts in Oklahoma and Texas are common in these summers after a La Nina. 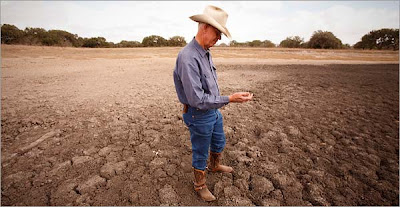 This drought promoted further growth of the ridge of heat. The moist ground and the trough over Ohio kept the ridge from pushing east.  Eventually in July, the trough flattened and the ridge slid into Ohio and the Great Lakes in an albeit weaker state.  The result was a burst of heat that culminated in 6 quick 90 degree days which killed my prediction by July 21st.  The high that day was 97, the hottest day in Cleveland since 1995.

The third was my overemphasizing of the MJO.  The MJO or the Madden Julian Oscillation is the cyclical movement of tropical convection that can directly influence the position of the jet stream in North America. CLICK TO ANIMATE THE IMAGE

Without going into too much detail, it seemed that the MJO reacted in such a way as to promote more eastward warmth than eastward "cooling". Again, it wasn't the strongest MJO signal but could have played a small part.

WILL AUGUST BE AS CONSISTANTLY WARM AS JULY, CHECK BACK AT THE END OF THE WEEK. I'LL HAVE THE "FORECAST PATTERN" FOR AUGUST.

As for the temperature numbers, here are the number of 80 and 90 degree days through July 31st over the last 5 summers: 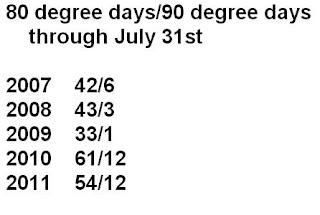 Now for the tropics.  Tropical storm EMILY is now churning in the Caribbean as I write this. 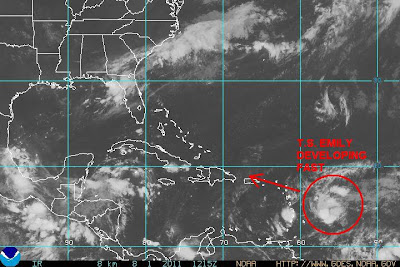 The forecast brings this system very close to the US coastline by the end of the week. 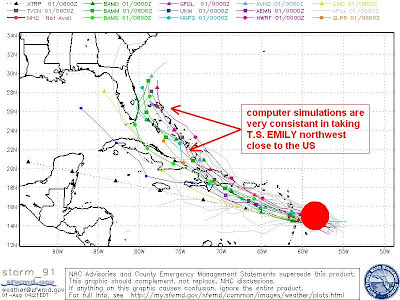 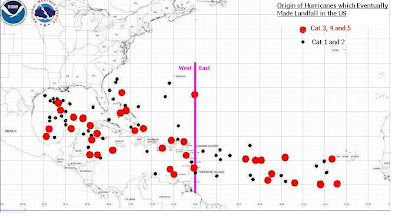