Email ThisBlogThis!Share to TwitterShare to FacebookShare to Pinterest
Rains from Isaac continue to stall over the southern portions on NE Ohio. A few clusters of heavy rainfall have settled in Lorain, Medina and Cuyahoga counties. Here is the radar loop from 11:30PM Saturday night which gives you a good idea of what the radar will look like Sunday: Localizes heavy rain!

Aside from lake effect snow, predicting how tropical systems will effect northeastern Ohio days in advance is one of the toughest tasks as a meteorologist here in Ohio. Its only happened 14 times since 1851 so there aren't many examples to learn from. Here are the 14 tropical system tracks as they crossed over Ohio. Its a jumbled mess of lines but you get the idea. Notice Katrina, Opal, Hugo and Fran from recent memory. 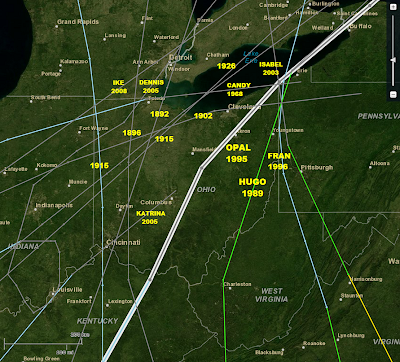 The other tropical systems that are comparable in their track to Isaac are:  Candy 1968, Katrina 2005 and
Opal in 1995; Dennis is a good one too.

This weekend, several elements will be impacting the movement of Isaac's remains. The first is the dry air over Ohio and surrounding areas. The water vapor satellite photo shows this very well. White colors are moisture, dark colors are dry air. 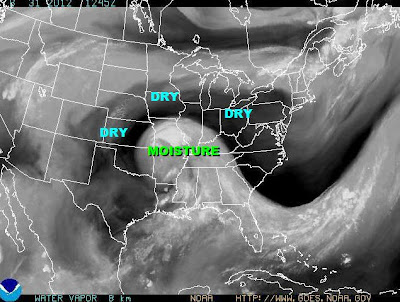 The other element is the cold front moving south. This will act at as the steering mechanism which continue to focus the rain further east into Illinois, Indiana and Ohio. 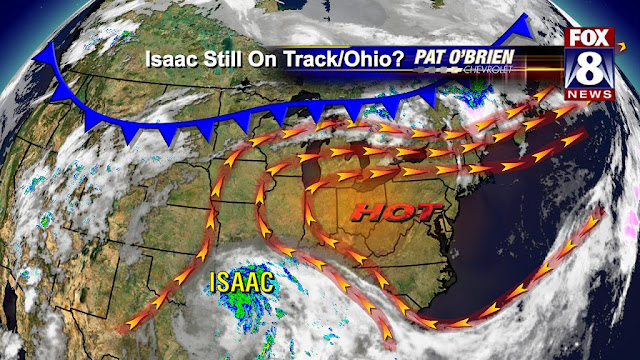 As of late Saturday, rainfall from Isaac will be centered in Illinois and Indiana this weekend through Monday

Email ThisBlogThis!Share to TwitterShare to FacebookShare to Pinterest
First, let me address one item before we dive into the meteorology of Isaac. Many are saying that the media is over-hyping Isaac.  To this I say, ABSOLUTELY NOT. 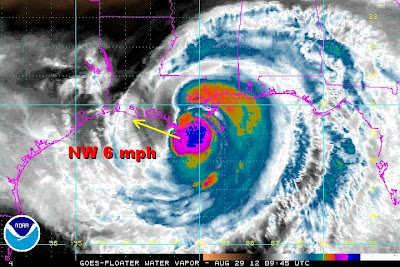 While I am very critical of the media's handling of weather stories, hurricanes or tropical storms are a different matter. These storms are very large and the impact can be felt across several states at a time. Too often, people fixate on the wind speed and wind gusts as a gauge on how damaging the storm will be in any one location. Yet rainfall and flooding are often overlooked as major damage contributors. My theory is that because flooding events are so hard to quantify and even harder to forecast locally, our minds don't process  hearing a forecast of 5 to 10" of rain.  A wind speed forecast of 80 mph hit our brain like a lead weight and drives home the story faster and harder. Only after we see video or pictures of the areas flooded does it sink in. The fact that Isaac delayed the Republican National Convention makes it seem more significant.  Isaac was on the news a week ago so we were primed for hearing the name "Isaac" when it was 500 miles away. More importantly, Isaac is hitting a major US city which lies below sea level makes the situation potential worse than if it hit Miami.

My point is that rainfall and subsequent flooding from ANY TROPICAL SYSTEM regardless of the wind speed can be deadly. We can never underestimate or under report any tropical storm!  Yes, Isaac is no Katrina. The characteristics of Isaac are far different than Katrina. The direction of moving is different.  By Thursday, the flooding will no doubt be as destructive for many of the same areas hit by Katrina exactly 7 years ago.

Now to the weather.  Why has Isaac slowed down?

The high pressure ridge north of the gulf coast centered over the mid west and the Great Lakes is pushing south and east deflecting the movement of Isaac west. The steering currents are not favorable for rapid movement inland.  So Isaac continues a Northwest crawl at 6 mph. 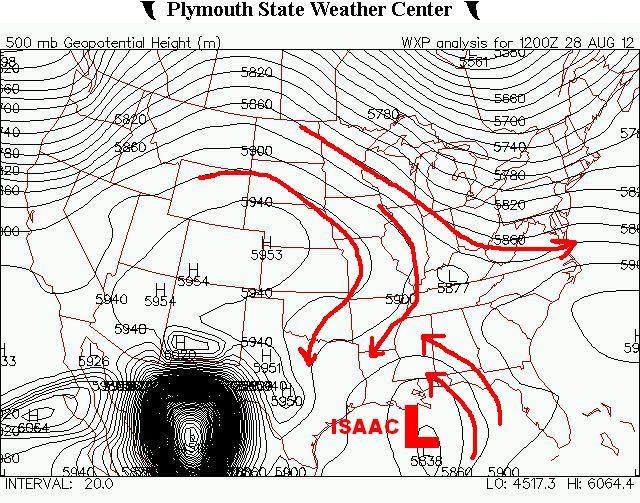 Compare this setup to Katrina. Notice the trough in the middle of the country. The steering currents were perfect for a northerly trek inland 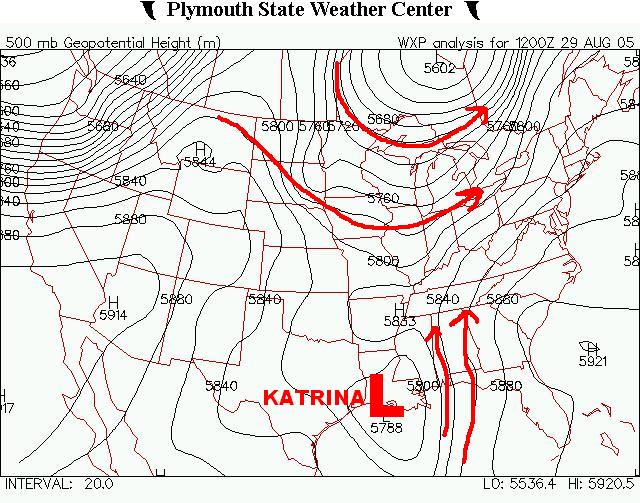 Wind direction around the storm and into the shoreline is from the southeast and east. A report of 110 mph gusts Bayou Gauche from St. Charles Parish EOC.  This direction funnels gulf moisture right into New Orleans and surrounding areas making the flooding threat greater even with the lack of Katrina-like winds. 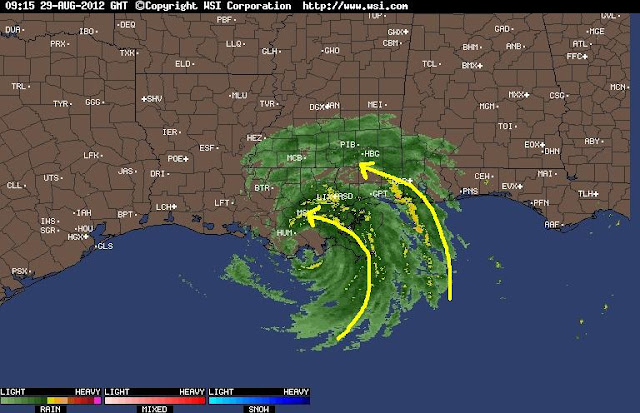 A close up of the wind field around Isaac really tells the story on how the southeasterly winds pull gulf moisture right onto the shoreline. 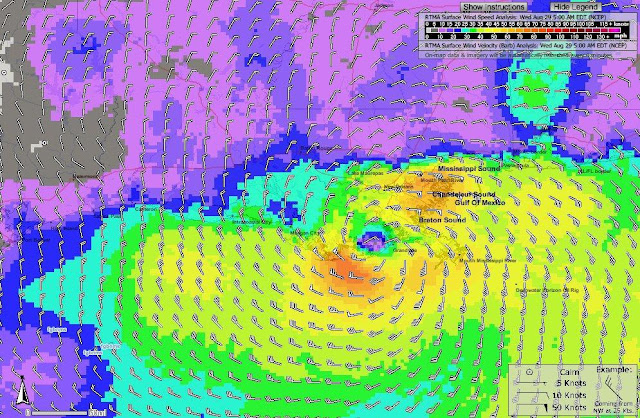 Here is a great map showing the rainfall as of 8AM Wednesday which is approaching 10 inches. 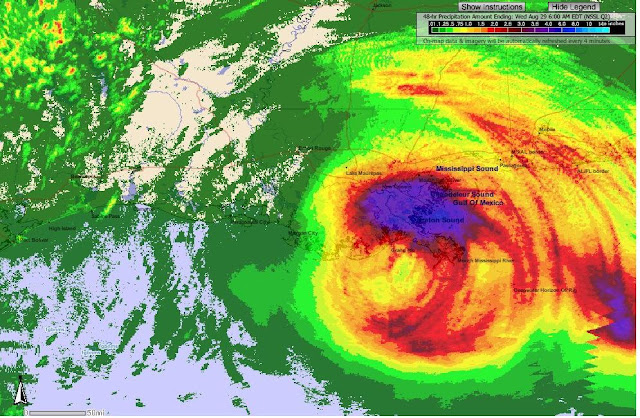 New Orleans more than any city in the US is the most susceptible to flooding because it sits below sea level. Here are a few streets elevation compared to how they sit relative to the sea. The map is not to scale. 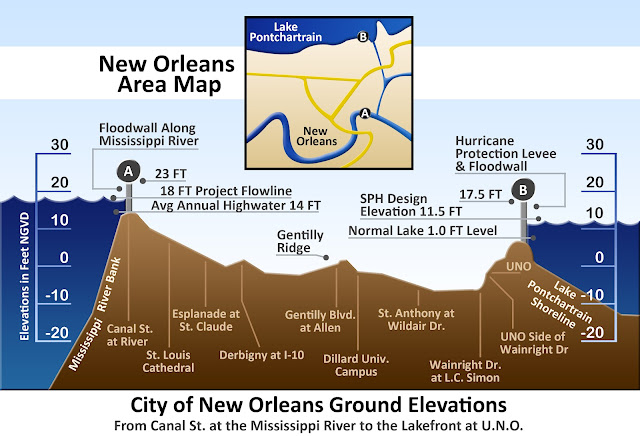 Email ThisBlogThis!Share to TwitterShare to FacebookShare to Pinterest
Isaac will become a weak Category 1 hurricane later today if not there already as of midday Tuesday. Winds are getting tighter within the core. Pressure is dropping slowly.  Intensification is ongoing. An eye is forming slowly. Unfortunately for residents along the gulf coast near New Orleans, landfall seem eminent on the 7th anniversary of Hurricane Katrina. Winds won't be the biggest problem. Heavy rain approaching 20"+ with a high storm surge will cause millions of dollars of damage. 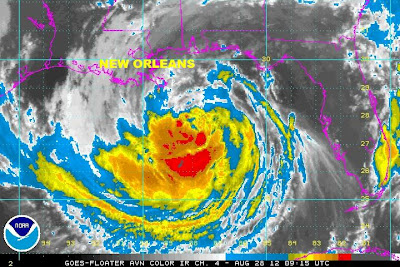 The National Hurricane Center is still forecasting a landfall early Wednesday with more than 15" of rain in a huge area of the south.

WHEN AND HOW MUCH RAIN WILL WE GET FROM ISAAC?

Using Google Maps, we can superimpose the computer projections over Ohio to see the possible track this weekend. 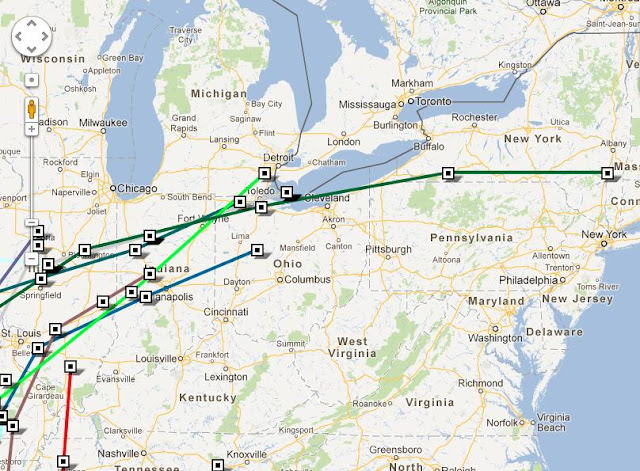 Now, the Hydrometeorological Prediction Center is now painting a HUGE swath of rain for Illinois, Indiana and Ohio for Sunday.


THIS COULD BE A HUGE RAIN EVENT!

The remains of Isaac to head north into Arkansas, Missouri bringing welcome rain to the drought stricken regions of the midwest. The hardest hit drought areas are circled on the map below.

Rainfall in this area could exceed 3-5" assuming that the remains of Isaac track up the Mississippi. While not a drought buster, it would alleviate the dry conditions.

The remains will curve into Illinois, Indiana and then Ohio this weekend. The bigger questions all of us in Northeastern Ohio is:

WHEN AND HOW MUCH RAIN WILL WE GET FROM ISAAC?

Using Google Maps, we can superimpose the computer projections over Ohio to see the possible track this weekend. 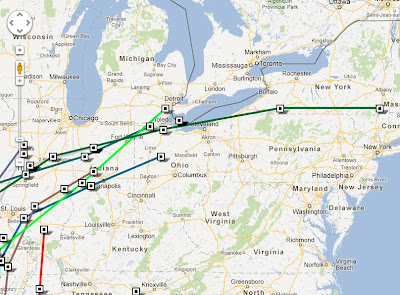 These solutions are looking more accurate with each run. Granted, we are still 5 days out. Tropical systems that work over land change drastically over time. Yet, they have a history of producing this type of rain in Ohio. Here is the rain shield that extended from the gulf to Ohio from Katrina. We received several inches of rain from that event. More later this week! 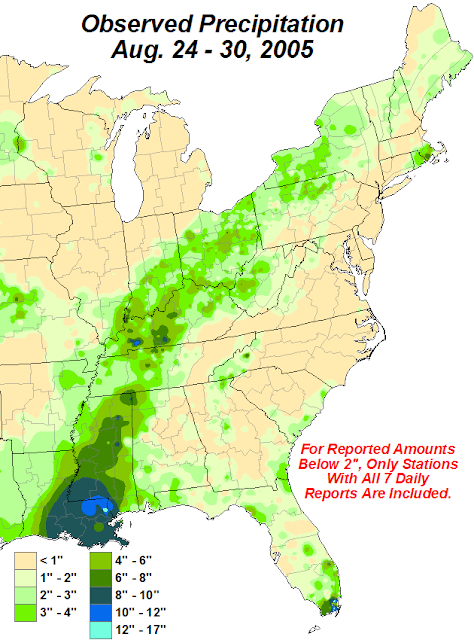 Email ThisBlogThis!Share to TwitterShare to FacebookShare to Pinterest
We've been tracking Isaac since early last week. Now that Issac is heading into the Gulf of Mexico with no land to inhibit its development, the forecast is now more certain. Unfortunately for residents along the gulf coast near New Orleans, landfall seem eminent on the 7th anniversary of Hurricane Katrina.

Here is the latest satellite image of Isaac. Click on this link for the most recent image 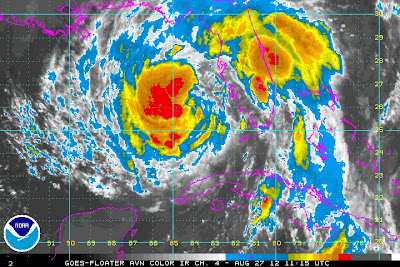 How does this hurricane compare to Katrina? Look at the track of Katrina. It came out of the south as it made landfall in Louisiana...

The gulf water temperatures are running well above normal. This aids in the intensification process by evaporating water (the salt stays in the ocean). The process of water vapor condensing into water drops releases tremendous amounts of energy which all originates from water ocean water.

Heavy rain from New Orleans to Pensacola. Notice the amounts:  18 inch bulls eye along the coast. Storm surge will be the highest along the Mississippi coast

All of the models are pushing Isaac further west with the remains into Ohio by this weekend. If you are heading to the Cleveland Airshow at Burke Lakefront Airport, stay up on the latest forecast 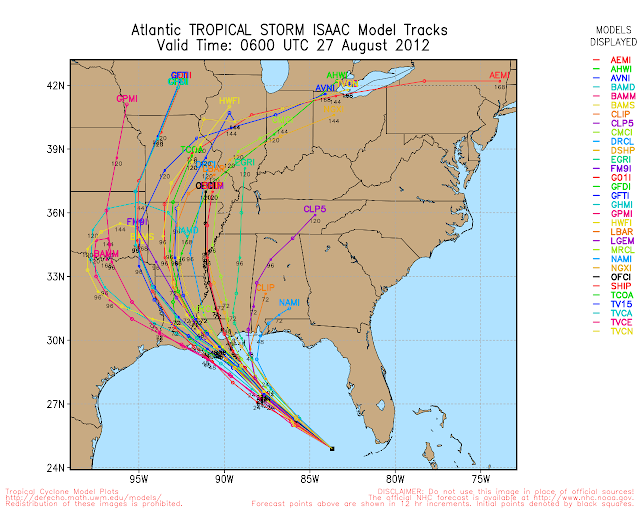 Using Google Maps, I pasted the model projection over a closeup of Ohio. I show this only because I love seeing things in weather that don't often happen. A projection that takes tropical remains over Ohio is not an everyday event. Something to watch later this week...
at 7:28:00 AM Posted by Scott Sabol No comments:

Email ThisBlogThis!Share to TwitterShare to FacebookShare to Pinterest
This morning's Tropical Isaac update shows more consensus on the track of Isaac as it intensifies into a hurricane.

The satellite shows the areas of concentrated convection coming together as it moves into warmer waters. 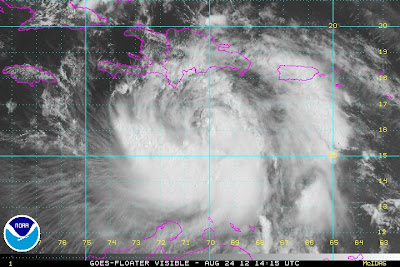 The track as of mid morning Friday continues to show it moving over Cuba, Key West and into the Gulf of Mexico early next week 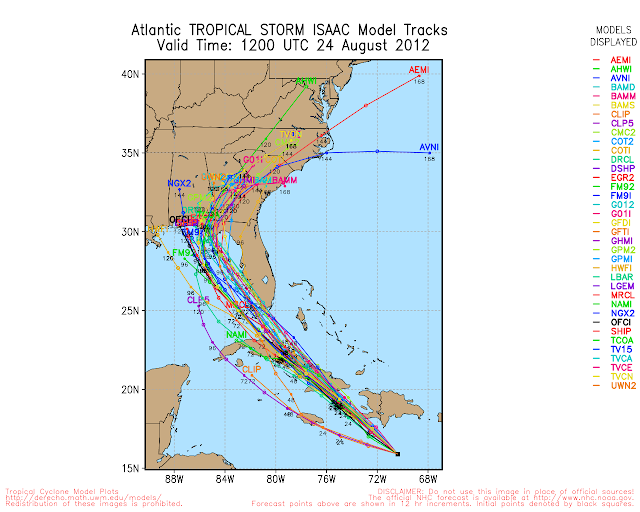 Rainfall will be tremendous across southern Florida and into southern Alabama and the panhandle of Florida. Look at the 8"+ ares from Key West northwest.

Hurricane Dennis back in 2005 took a similar track.

The water temperatures in the Gulf of Mexico are above normal in most areas so the potential for intensification is very high before it make landfall along the gulf coast. Check out the temperatures. The black line indicates the projected path of Isaac.

What about after it makes landfall? The long range track pulls the center of Isaac more east which would eliminate Ohio's chances of seeing tropical rainfall. More updates this weekend! 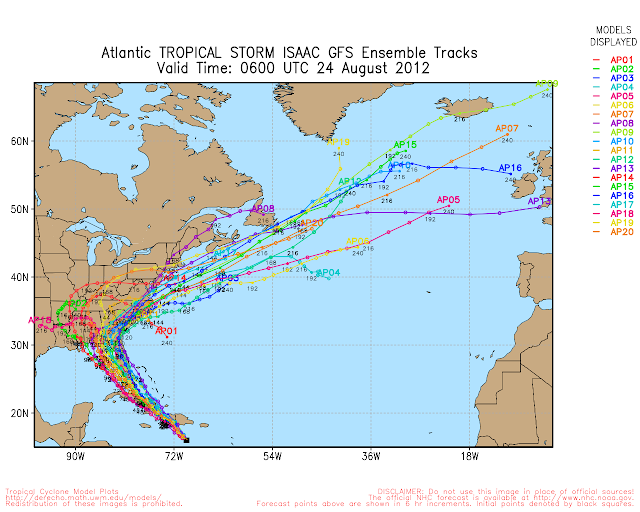 Email ThisBlogThis!Share to TwitterShare to FacebookShare to Pinterest
Hurricane season is all of a sudden upon us after a relatively quiet summer in the tropics. Now, Tropical Storm Issac is steady with further development to hurricane strength (if not already).

The satellite image (as of Thursday) doesn't show a defined eye. That should change later this week. 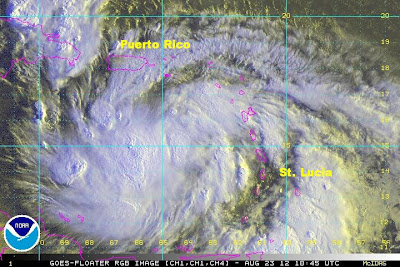 The hurricane track from the National Hurricane Center always included a white cone which shows the degree of uncertainty in the movement of the movement. The larger the cone, the greater the uncertainty. Here is a great graph on this "Cone of Uncertainty". 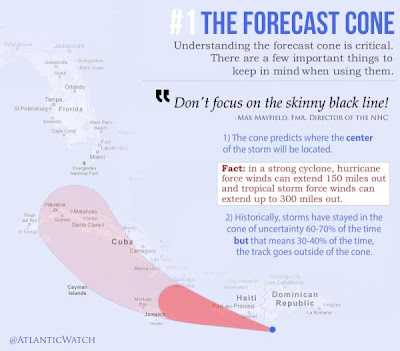 You can trace the beginnings of this storm back to the African country of Guinea when it was a weak tropical wave. 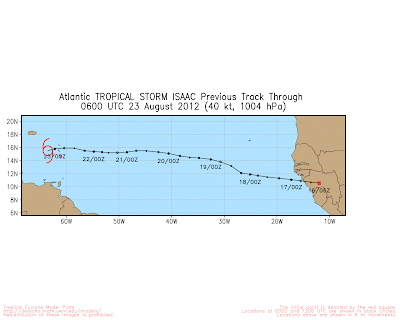 Now to the specifics. Most of the statistical and dynamical models bring Issac near Florida later this weekend. 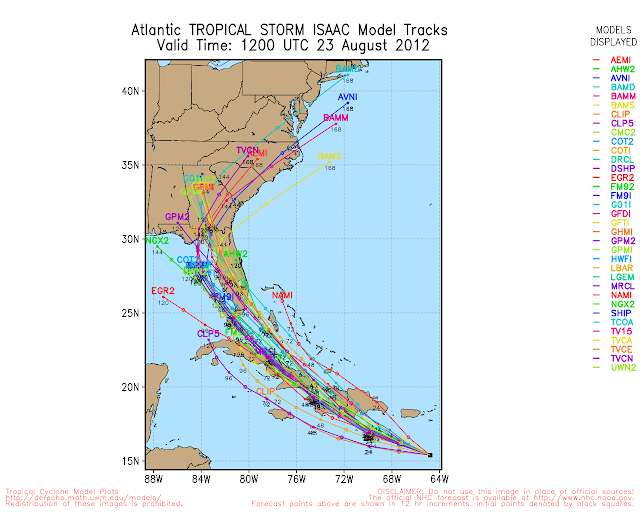 Rainfall for southern Florida could be excessive!

How does Issac compare to other tropical systems that share similar speed, intensity, motion, location? 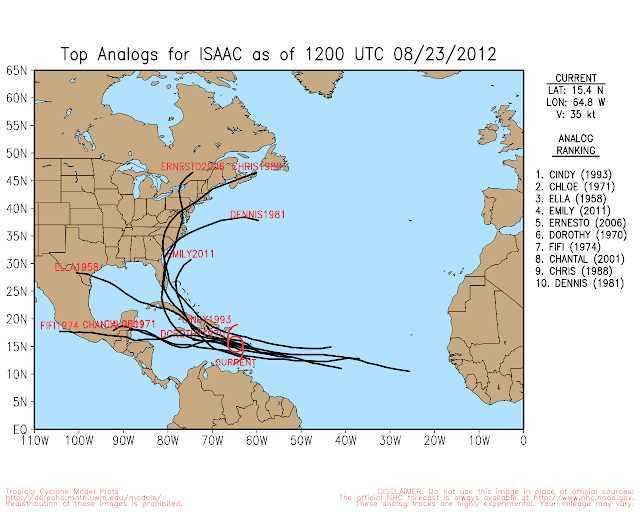 Could Issac redevelop in the Gulf of Mexico and make landfall along the Gulf Coast?  Yes!!! 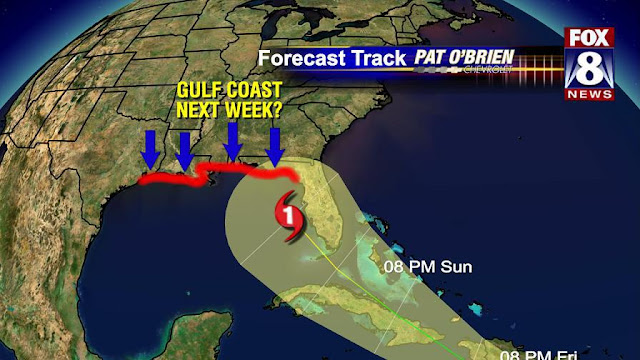 Computer projections take the remains of Issac right up the east coast next week. This could bring heavy rainfall from Georgia to Virginia. More later this week! 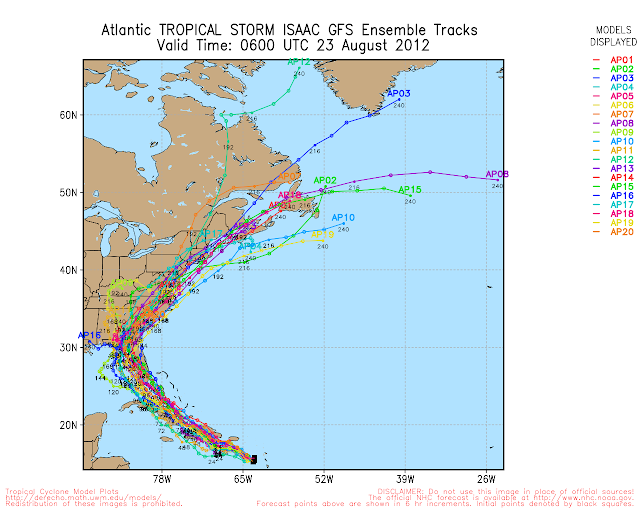 Email ThisBlogThis!Share to TwitterShare to FacebookShare to Pinterest
Storms popped up this morning in this fall-like pattern. Fortunately, they faded away just as the sun was rising. The sun was at just the right angle through the showers west of Cleveland to produce some great rainbows. If you took a rainbow picture, email them to me "scott.sabol@fox8.com"!