Dimensions of ALL Major League Ballparks 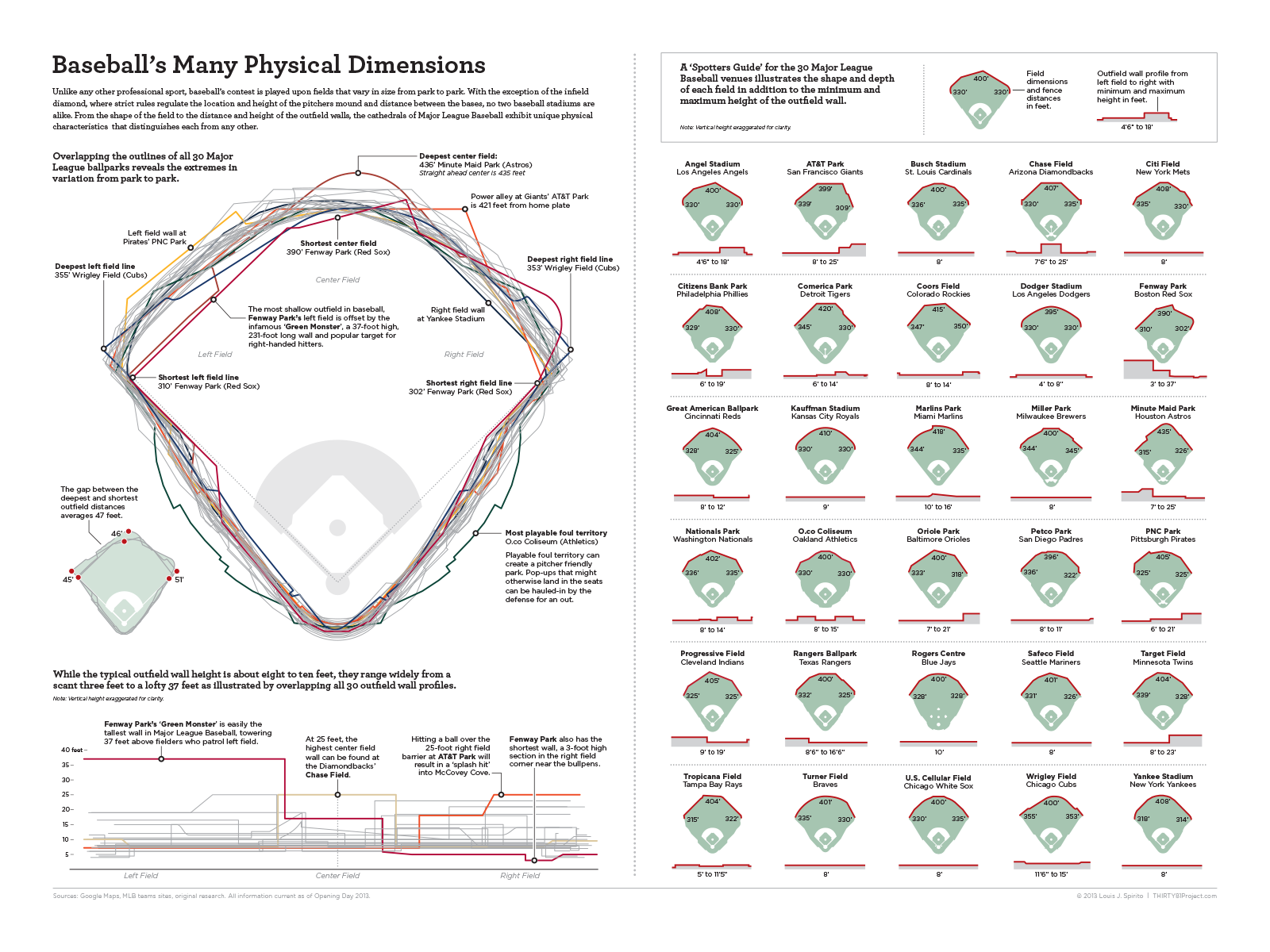 Digging Deeper For Signs Of The Next El Nino

Email ThisBlogThis!Share to TwitterShare to FacebookShare to Pinterest
After reading several posts which posed the question of whether a "Super El Nino" will develop this summer, I wanted to find more data to shed light on what to look for in the upcoming weeks. These articles have sited sea surface temperature comparisons to 1997 both on the surface and below, ocean heat content, the building Kelvin Wave and subsequent changes in atmospheric winds.  All seem very valid. Let's review:

Comparing the sea surface temperatures on March 24th of this year to 1982, 1997 and 2002 (a weak El Nino year), each shows some warming in different locations at least on the surface. I circled the area in question in red. This is why we can't use a two dimensional sea surface temperature map as the only El Nino indicator. Sub surface heat continues to build since the beginning of the year (see above). It compares very well to the onset El Nino of 1997. The Australian Bureau of Meteorology shows this very well. 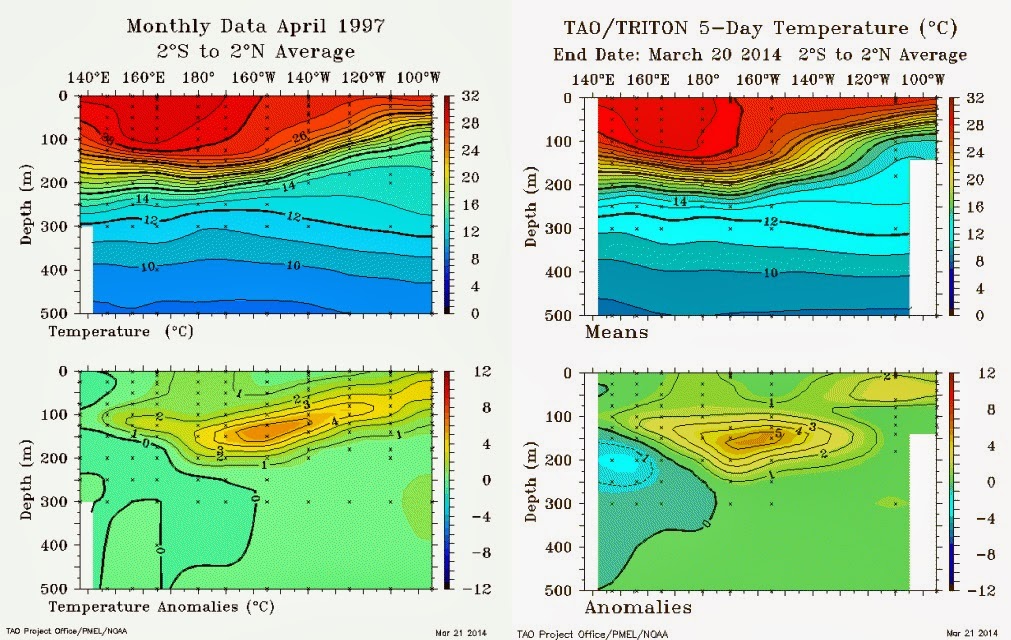 2002 was a weak El Nino year. The subsurface heating was nowhere as warm.

Comparing the sea surface temperatures on March 24th of this year to 1982, 1997 and 2002 (a weak El Nino year), each shows some warming in different locations at least on the surface. I circled the area in question in red. This is why we can't use a two dimensional sea surface temperature map as the only El Nino indicator. 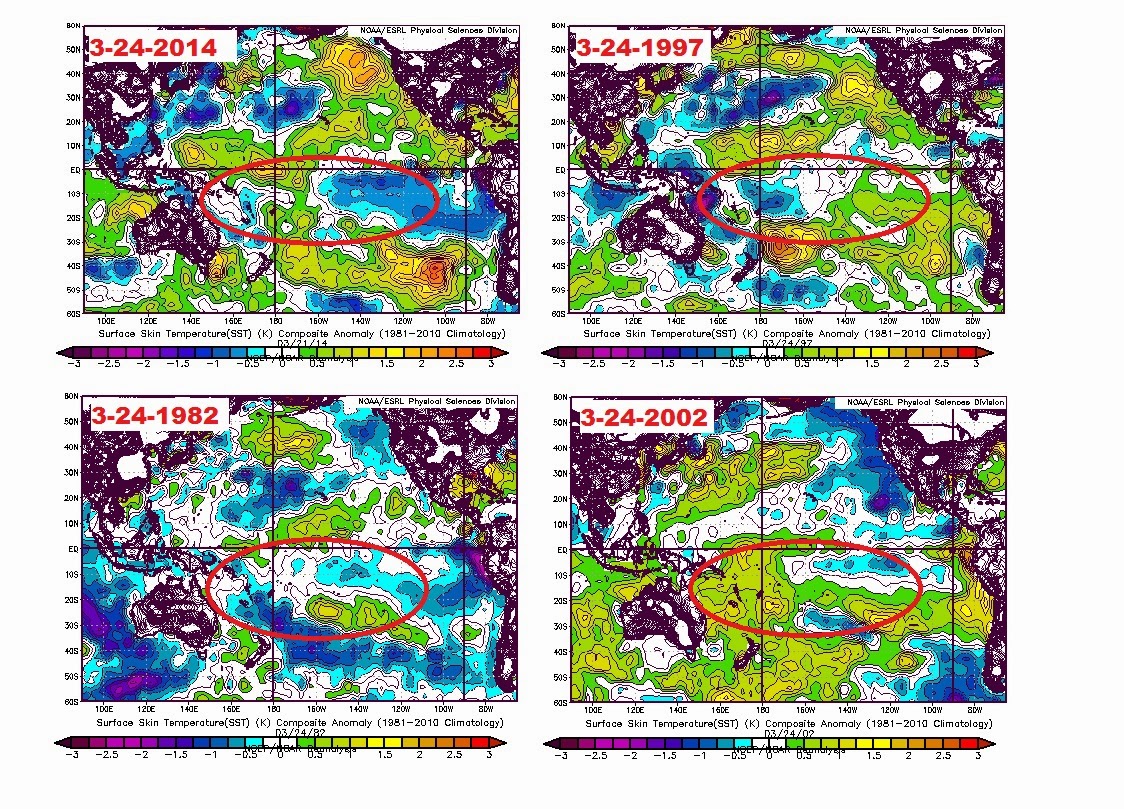 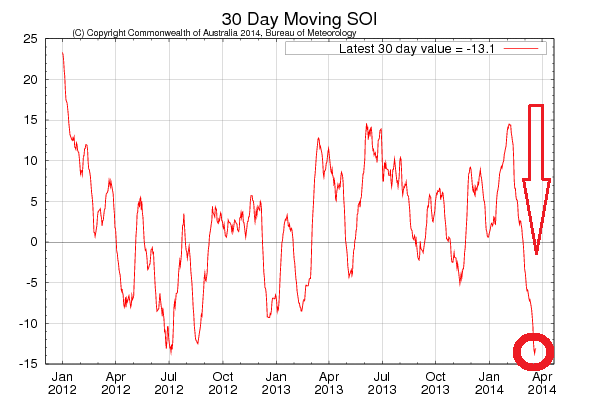 Yet one index that blends together BOTH the changing ocean characteristics and the atmospheric conditions above it hasn't caught onto the idea...at least yet. Interestingly I haven't found much mention of this. This is called the Multivariate ENSO Index. The index includes several elements into its index: Sea surface temperatures, wind speed and direction, sea level pressure and temperature along with total cloud cover/fraction of the sky. Details are here on ESRL SITE.  Similar to the ONI Index, the MEI Index is calculated using overlapping 2 month periods. Since it takes into account many other atmospheric variables, the El Nino or La Nina signature may lag a bit compared to the others But in my opinion, it gives a better overall representation of the ENSO state even though it might be late to the party.

So far, the MEI is far ahead of 1982 and 1997, yet no positive numbers have shown up. Remember that The MEI is an overlapping bi-monthly indicator. So when the April update comes out (probably the first week of April), it will illustrate the conditions (ocean and atmospheric) for the FEBRUARY-MARCH overlap. If a  significant El Nino is truly developing, a SIGNIFICANT JUMP in the MEI would indicate it THIS SPRING as it did in 1982 and 1997. Check out the chart below for the past trend.


Be careful, the 1986 and 2002 MEI trends were SIMILAR to this year. Those years were weaker El Nino years. 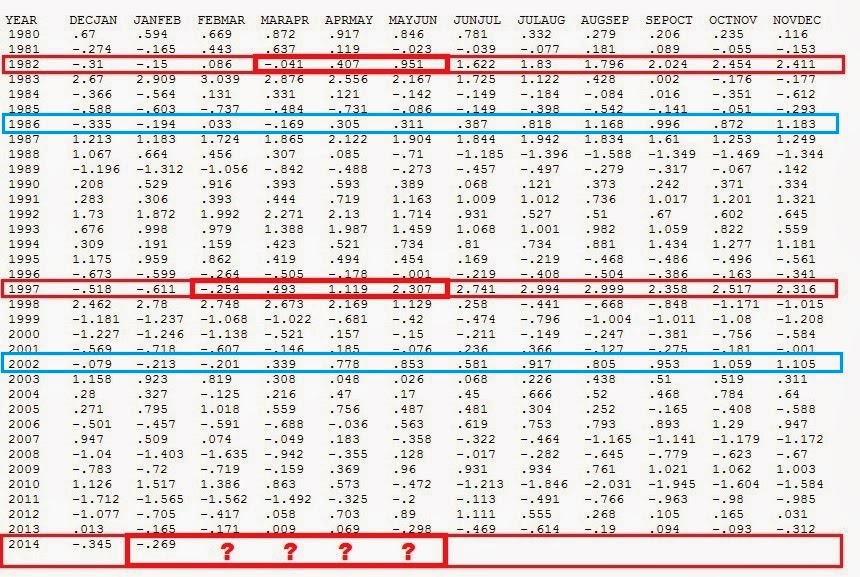 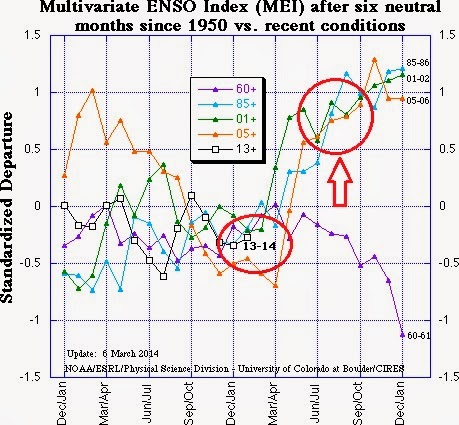 So what's going to happen? Will the MEI match up with the MEI indices of the past El Ninos circled in black above. Will it mirror 2002 or 1986?

How will this effect out summer weather?

Vernal Equinox is today. So how COLD was this winter?

Email ThisBlogThis!Share to TwitterShare to FacebookShare to Pinterest
The Vernal Equinox is at 12:57PM Eastern Daylight Time.  Astronomical winter is over!

While the meteorological winter is far from following in the footsteps of the earth's tilt and position around the sun, it gives us a good time to look back at the official season of winter to determine how COLD it actually was versus other winter similar to it. 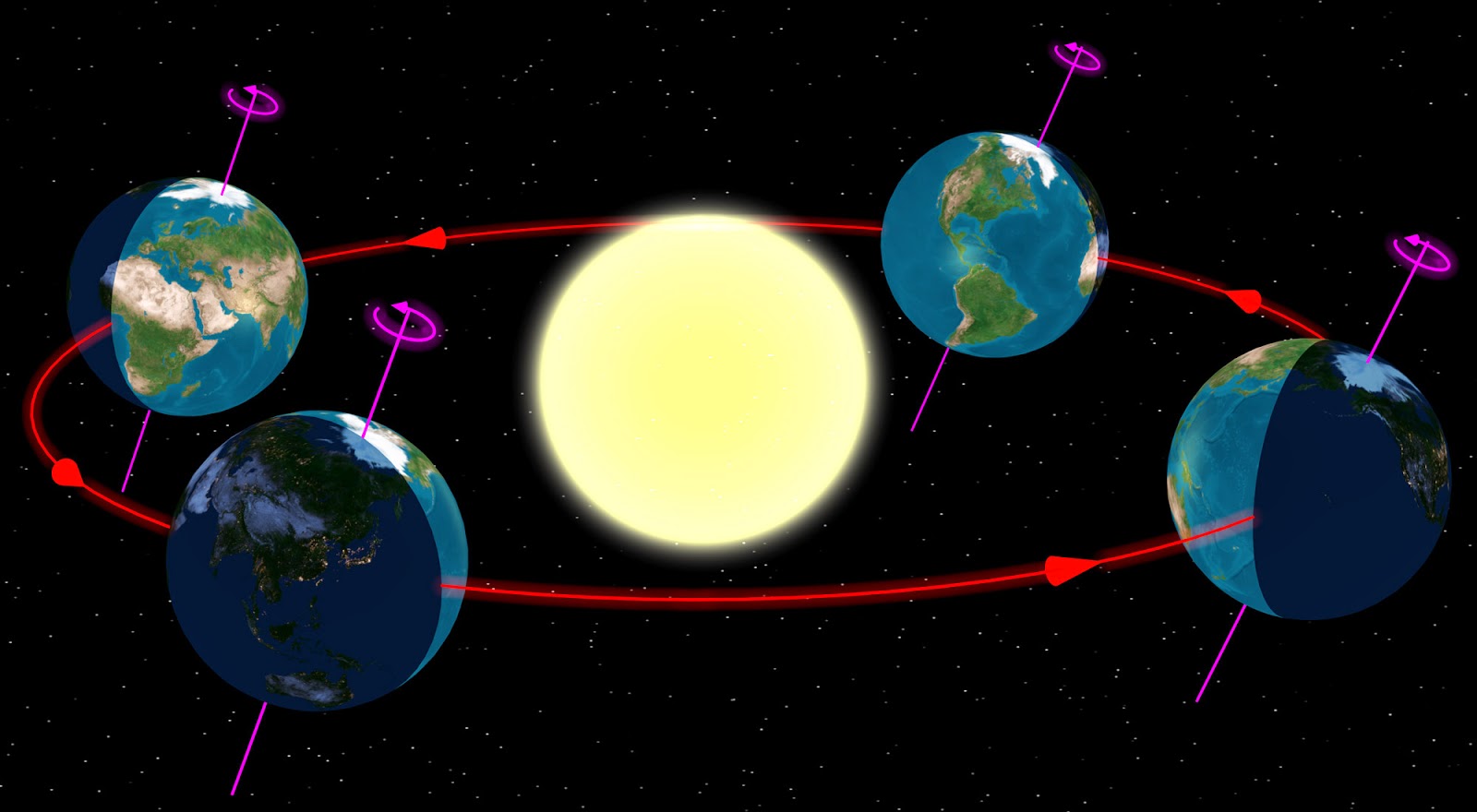 Back in February, I mentioned 4 indicators of winter severity.  1) TOTAL SNOWFALL, 2) DAYS WITH SNOW ON THE GROUND 3) AVERAGE TEMPERATURE & 4) NIGHTS BELOW 10 DEGREES.  Was this winter among the coldest and snowiest all-time? Where did this winter rank?

Each graph will show where this year resides ALL-TIME which goes back to 1871. Many have mentioned how this winter is the coldest in a generation. So I created a second graph which shows the the information over the last 40 winters (since 1975) for a more recent perspective.

LAST 40 WINTERS
4 WINTERS IN THE EARLY 2000s HAD MORE SNOW THAN THIS WINTER! 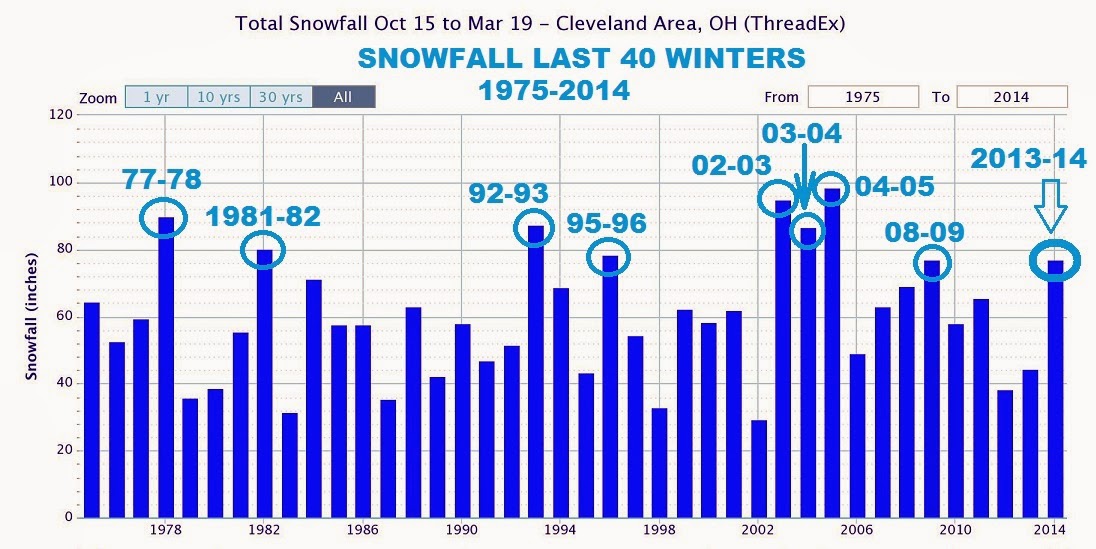 5TH COLDEST IN THE LAST 40 WINTERS

Email ThisBlogThis!Share to TwitterShare to FacebookShare to Pinterest
We see people walking on the Lake Erie ice every year when the lake ice cover is significant. Why people would take this chance especially this time of year when the ice becomes very unstable is beyond me. DON'T WALK ON LAKE ERIE THIS TIME OF YEAR!

The lake ice begins to crack and thin as the overall temperatures begin to climb in late March and early April. The sun angle is also higher so the sun is much stronger than what it was a month ago. 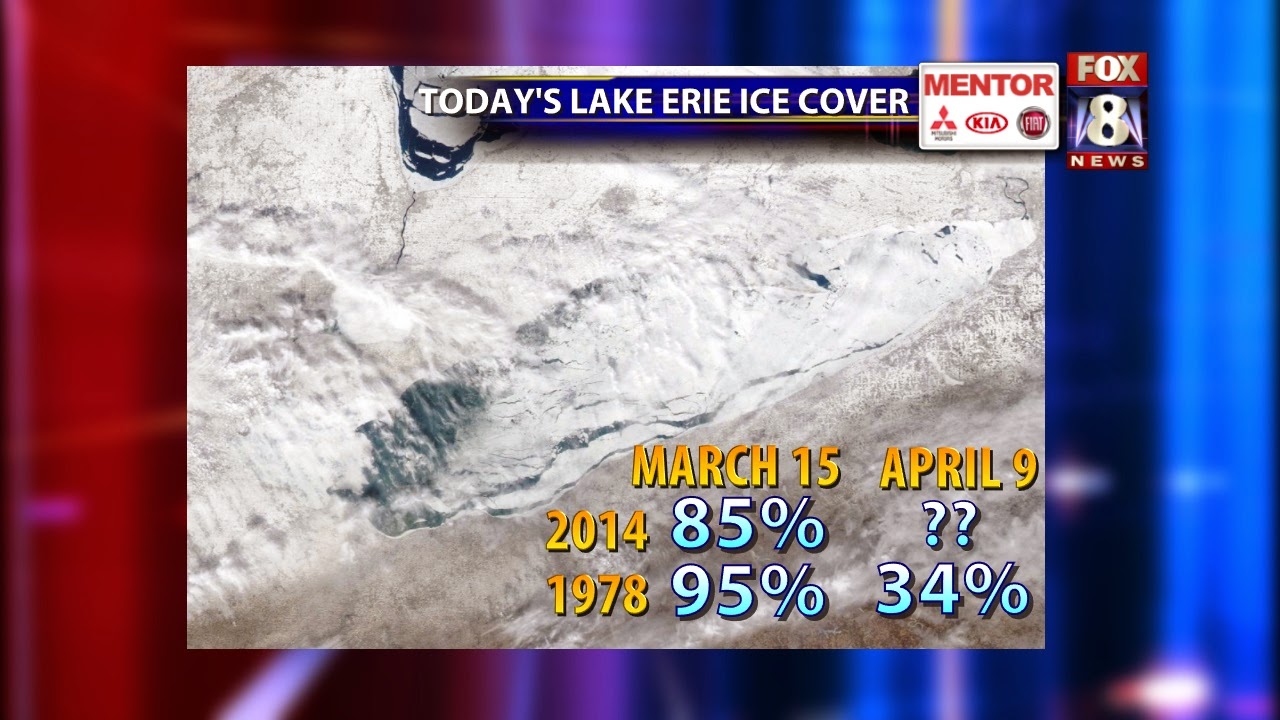 Expect this trend this year heading into early April. Remember, all of this melting and thinning continues to occur even when we have temporary cold spells.


So don't be fooled. Stay away from the ice!

Email ThisBlogThis!Share to TwitterShare to FacebookShare to Pinterest
I'm fairly confident on the timing of the rain/sleet/freezing overnight tonight and early Wednesday.
Current image is HERE...

The initial wave of rain will move into Ohio during the night.

By sunrise/morning rush, the southern and eastern areas will be only rain with a RAIN/FREEZING RAIN MIX further west and north. The dividing line will bisect northern Ohio between 6 and 9AM

Temps will fall fast into the 20s by early afternoon...teens by early evening. 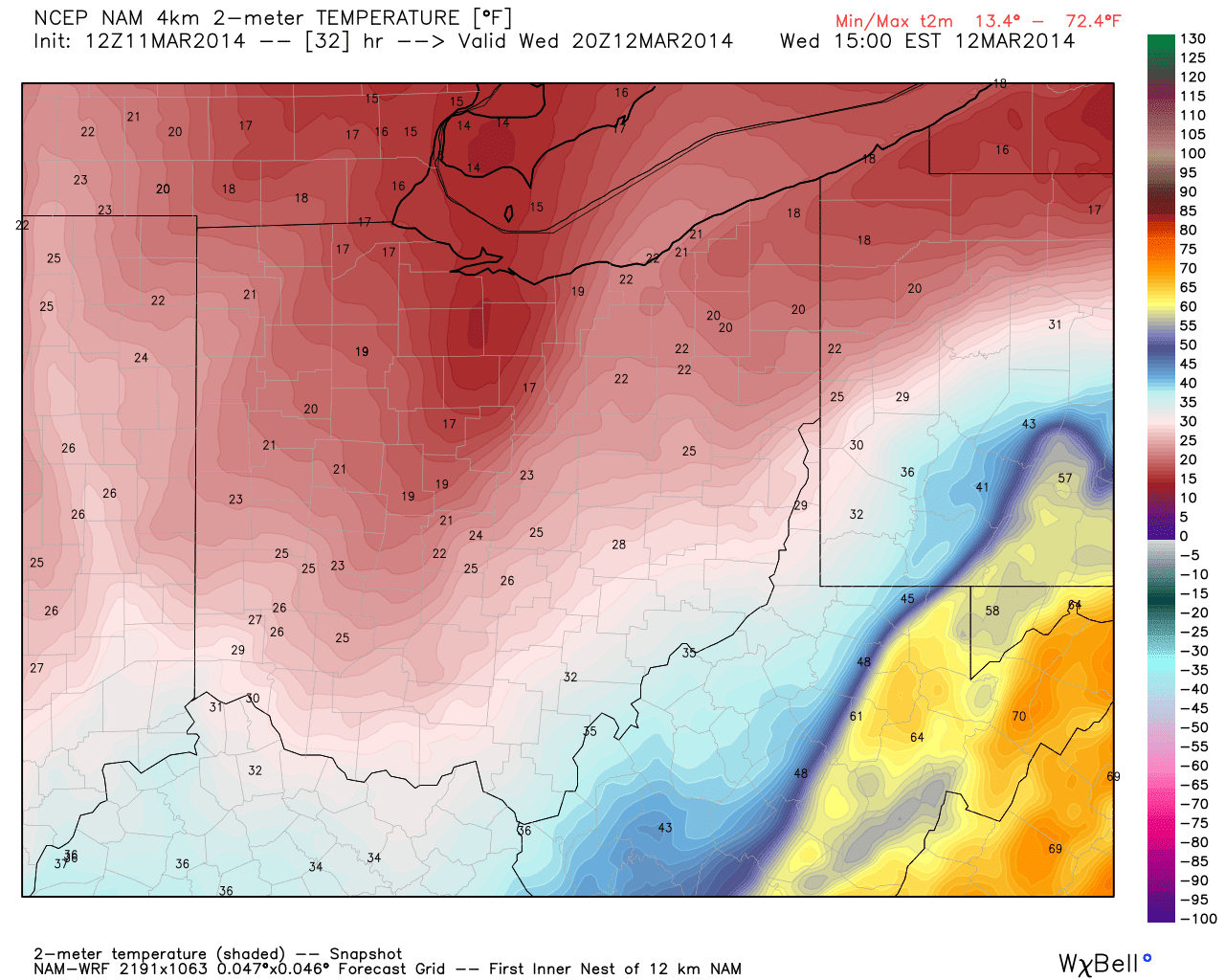 Winds will be steady above 25-30 mpg with 40-45 mph gusts late Wednesday afternoon and evening. 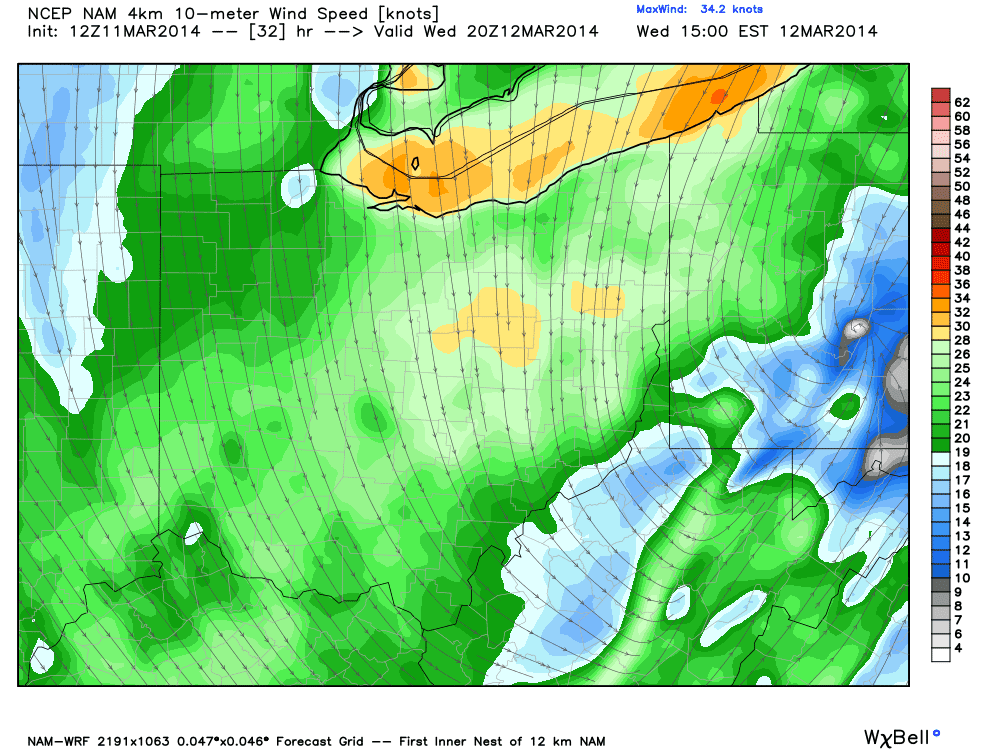 Updated snowfall forecast keep a thin band of heavy snow well north from Toledo to Sandusky, Lorain, Cleveland and east. Amounts will drop off further south. Much of the accumulation will be from mid morning through early evening. 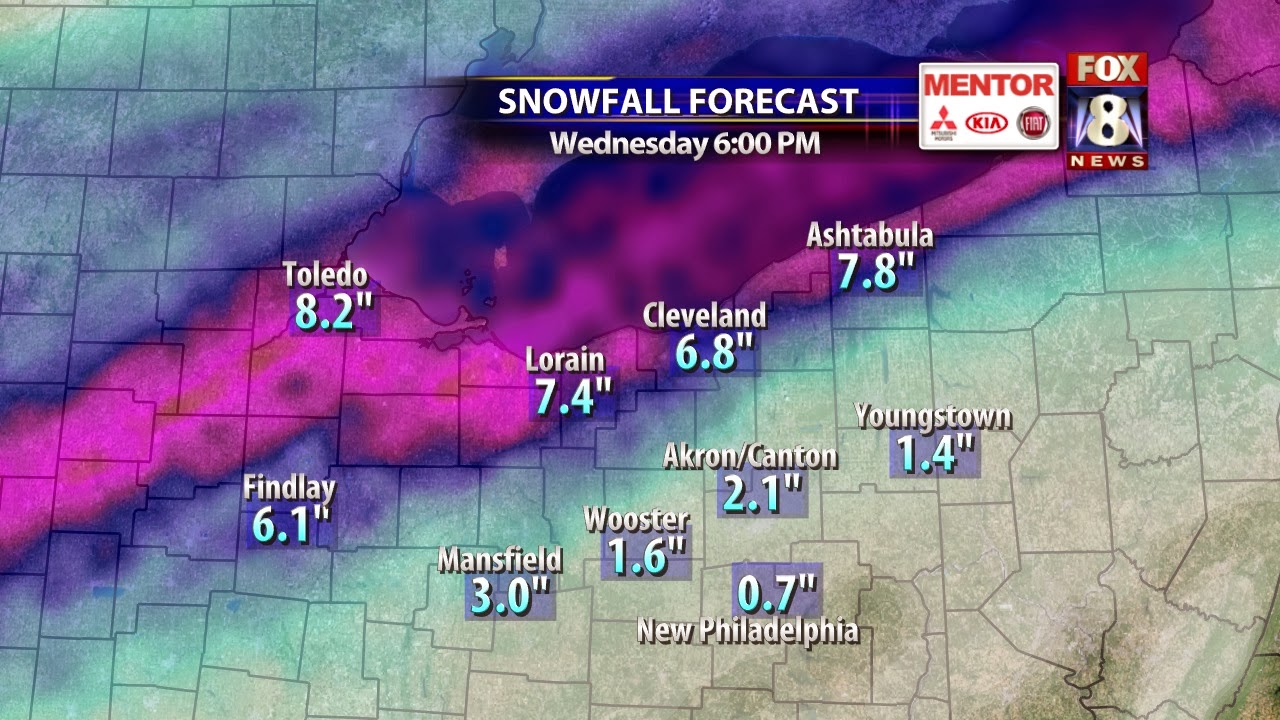