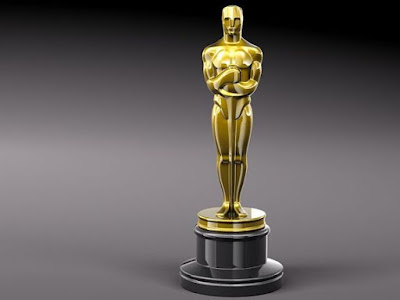 Here are some potential best picture nominees a year from now.  Keep this list handy.

OTHER MOVIES TO CHECK OUT:


FRANTZ
COMANCHERIA
A HOLOGRAM FROM THE KING
I, DANIEL BLAKE
THE GREAT WALL
WAR MACHINE
SLACK BOY
COLOSSAL
AFTER THE STORM
INSECTS

Mindset Behind My Snowfall Forecasts

Snowfall forecasts are very difficult animals both in the meteorology that's used to create them and the public's perception of the numbers you display.

Yet, many people on social media interpreted this preliminary forecast too literally. Several on Twitter freaked out when they saw Lorain close to the 3-5" range contour.  I told them it probably didn't matter since its--A RANGE!  Sure, Lorain was closer to the potentially heavier snowfall but the overall difference using the range for Lorain was small, probably an inch or two. Yet many on social media see it differently.

Yesterday morning (Wednesday), I adjusted the area of heavier snow further west but KEPT THE RANGES THE SAME. Once again, people on social media interpreted this as a huge alteration in the snowfall forecast to which I replied, "Use the ranges NOT absolute numbers".  In reality, the overall forecast within the confines of our ranges remained the pretty much the same aside from shifting the heavier amounts west a bit. Yet the perception by the some was that Lorain went from five inches to one inch. 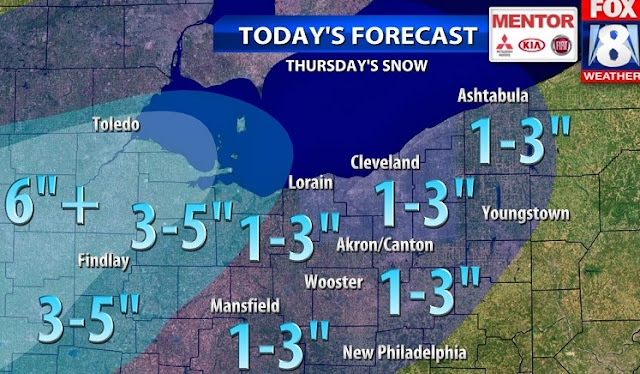 Most meteorologists on television, the public sector (National Weather Service) and in private industry use snowfall ranges in their forecasts. This works best because it takes into account the variance in movement and intensity of the many individual bands of snowfall within snowfall systems. The problem for the meteorologist is that most people want A SPECIFIC SNOWFALL NUMBER for their backyard.  Yet many people see a snowfall forecast during the morning newscast and believe that this holds for the entire day. Nothing is further from the truth. These forecasts are not one-and-done. They evolve throughout the day as the event unfolds. Forecasts change as the conditions change. People see individual snowfall amounts on their phone apps and believe these over human derived forecasts. They want absolute specifics yet more often than not, one snowfall amount number for any location will not work.

For example, here was my official snowfall forecast issued Thursday morning at 4am for the entire day using ranges: 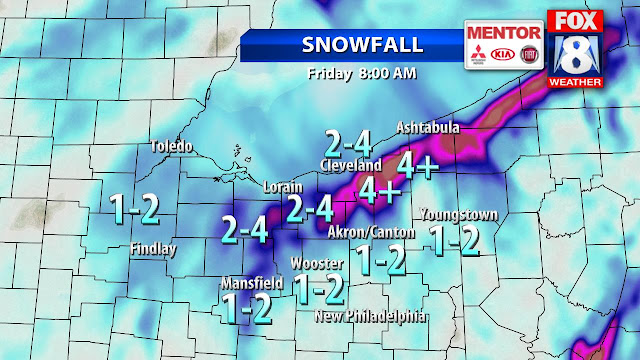 One specific (WRF 4km) high resolution computer model early in the morning cranked out these amounts for Thursday's snowfall.  While these were in line with our official snowfall forecast above, people fixated on some of the individual numbers and were confused. 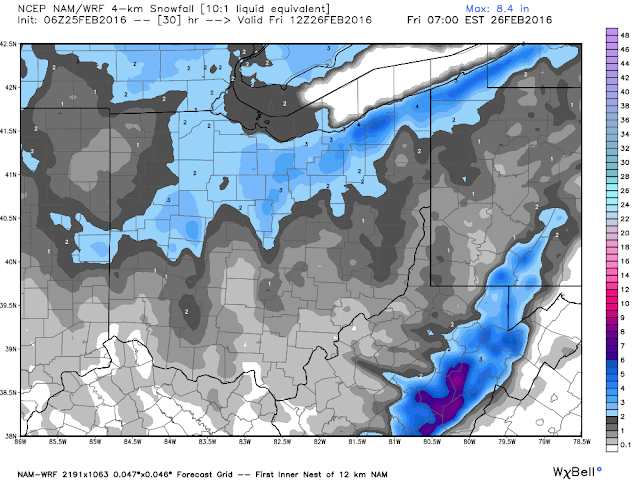 How do we combat this confusion on social and broadcast media? Good question.

My soft policy is that I rarely post computer model snowfall output unless we are inside 24 hours before a snowfall event. If my intention is to highlight the general outlook for the week ahead, I will post snowfall accumulations without numbers.  A quality controlled "hand drawn" map is another option. My ultimate goal is to present information that describes the weather without creating confusion.

Situations like this reminds me of the psychology behind the weather forecast. Most people want exactness in there forecasts. Remember that we are all hard wired to simplify uncertainty. So when a snowfall forecast range is posted on a map, people immediately find a number within that range that best fits. I'd like to say that I make a forecast with a cold, rational eye but I don't. I take into account how people with react to EACH WORD knowing that many people with perceive selective elements to fit their location.  I learned that real quick after my first major lake effect event twenty years ago.

If I could make a poster with bullet points for meteorologists, it would list these five at the top

*  We need to be better communicators of information

*  Too much emphasis on uncertainty breeds confusion, inaction and ultimately apathy when the next snow or weather event or importance happens. This is basic psychology that's been well documented over the years. We need to find a delicate balance between voicing uncertainty and sticking to a forecast.

Coldest air of the season Friday and Saturday 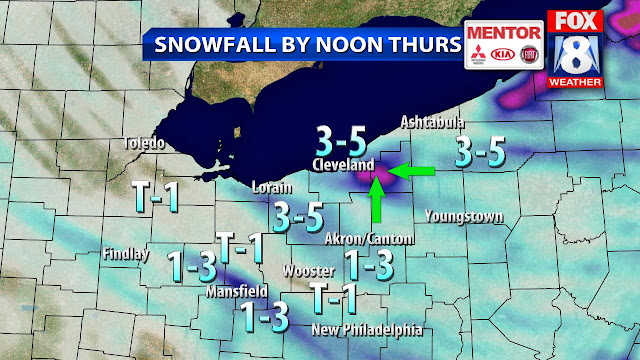 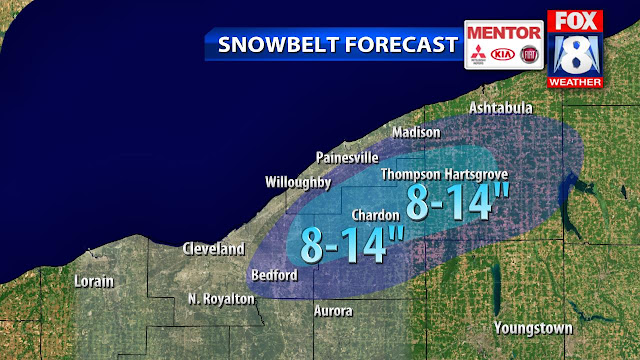 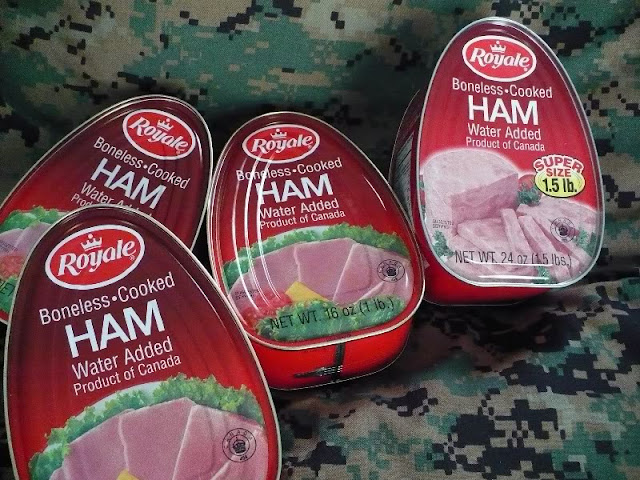 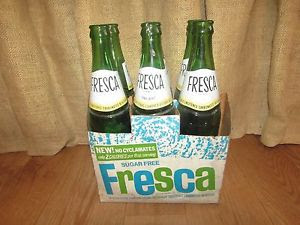 Why Do We Believe in Ground Hog Predictions? 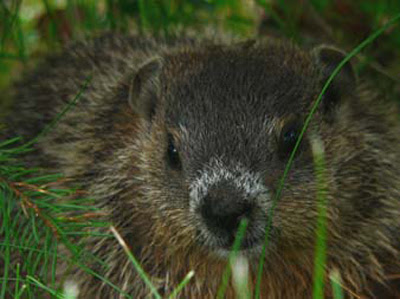 Ground Hog Day is a neat little holiday for many folks around the country who like to place the slothish behavior of a rodent on a pedestal. He's cute. Its old fashioned. Its tradition. There are top hats. Who wouldn't like to be a part of that?

So why do we like Ground Hog Day so much?

Our brains are hard-wired for simple stories. Go back to our earliest ancestors. Information was passed through stories.

We desire a good weather story (a feel-good forecast with some folklore) versus something data/science driven.  Why is this? A data driven paragraph by itself only activates the language processing centers (Broca’s area and Wernicke’s area ) of the brain. Brain scans show that if you incorporate stories with descriptive metaphors, it will active multiple sensory parts of the brain like the Motor Cortex (body movements) and the Insular Cortex (emotional region) at once. In other words, descriptive story with less data make our brains work harder by relating the story to our our own personal experiences! Given that personal stories make up more than 65% of our conversations, this makes perfect sense.

What does this have to do with weather forecasts?

Typically, our brains work much better with a theme or a story that has a beginning, middle and an end. In this daily forecast example, we visualize a line of showers that moves in at a specific time; it stays for a select amount of time and then moves out without fanfare. Our brains involuntarily take this weather story and creates a visualization by melding our personal experiences with the information. The forecast instantly becomes relatable!. It becomes personal!  Unfortunately, weather events rarely behave in this manner.

For our minds to grasp weather probabilities, we need to be able to handle multiple possible outcomes at once. Weather has many, many outcomes over a large area over a significant period of time. Change the initial weather conditions (humidity, wind flow, frontal position, upper level energy, etc) and you create more uncertainty. Factor in time and the probability becomes significantly higher. Unfortunately, when meteorologists attempt to use a data driven narrative to explain why something did or didn't happen, the emotional centers of the brain described above are not activated. The emotional centers of our brain are not activated when presented with probabilities. Our brains simplify the probability using a story (narrative) that we can relate to. If not, there is no nice and tidy story here for our brains to trigger an emotional response.  Simply put, we feel uneasy.

Instead, we favor more simplified stories like the folklore of the Ground Hog or the Old Farmers Almanac.  Without asking your brain subconsciously shrugs off probability and uncertainty narratives and replaces them with predictions and stories from the Old Farmers' Almanac or Punxsutawney Phil.

So why do we believe Ground Hog predictions? It makes us feel good.