Severe Event Likely Tonight. How Do I Convey The Message?

Email ThisBlogThis!Share to TwitterShare to FacebookShare to Pinterest
A significant severe weather event is likely across the Ohio Valley tonight. The Storm Prediction Center has western Ohio under a moderate risk, a slight risk for the center of northern Ohio overnight. We are only under a moderate risk a few times a year.  So far, no tornado warnings have been issued for any county in northern Ohio, a rarity this late into June. This is a situation that we need to take seriously. 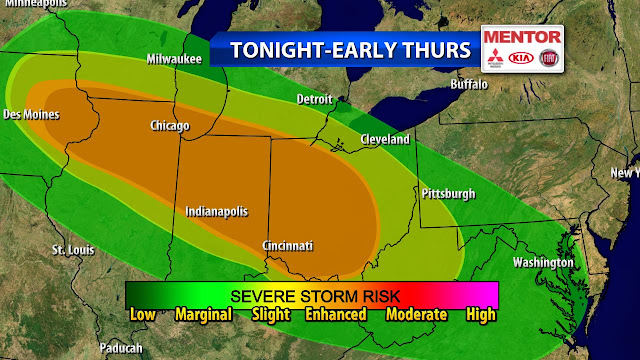 Radar shows the first of two storm clusters passing just south of northern Ohio. Notice the movement: Northwest to Southeast on the eastern edge of the central US ridge. 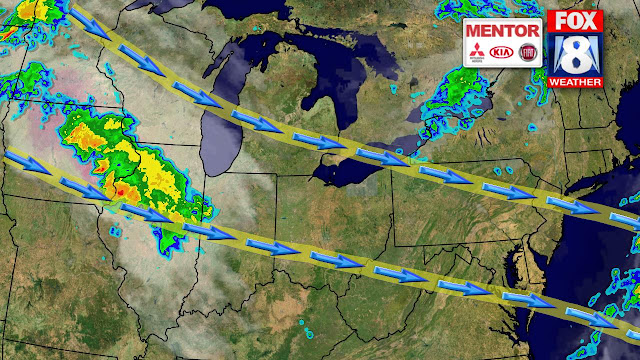 At a speaking engagement recently, I surveyed the group of around a hundred people what word they think of when I say the words severe when referring to the weather. The majority of them said tornado. Yet statistically, roughly 10% of severe storms produce a tornado. This is why you will rarely hear me use the word severe unless the situation absolutely warrants it. The word severe is very powerful and conjures up powerful imagery and perceptions. Weather situations like the one tonight (June 23, 2016) reminds me of the psychology behind our weather forecasts.

I'd like to say that I make a forecast with a cold, rational eye but I don't. I take into account how people with react to EACH WORD knowing that most people will react with their preconceived weather notions they've developed over time. Viewers hear the word severe and they think tornado. They panic and fear the worse even if the cold hard facts say otherwise. Its hard to reverse that mindset. I learned that real quick after my first major lake effect event twenty years ago.

If I could make a poster with bullet points for meteorologists, it would list these five at the top

*  We need to be better communicators of information. Quality of the information is better than clicks or social media engagement

*  For the public, risk is personal and evokes powerful imagery.  Mass media is for the masses.  Yet the masses in this era of smartphone weather apps want personal forecasts. Huge conundrum.

*  Too much emphasis on uncertainty breeds confusion and inaction. (I am hugely guilty of this as a technical weather geek) We need to find a delicate balance between voicing uncertainty and sticking to a forecast without blowing the event out of proportion.
at 9:39:00 AM Posted by Scott Sabol No comments:

Email ThisBlogThis!Share to TwitterShare to FacebookShare to Pinterest
Many meteorologists including myself have written about the state of the winter El Nino and the strong probability that ENSO would transition to an infant La Nina in spring/summer of 2017 for a while now.  Main news sources give the impression at this transition out of El Nino as something new.  I tweeted a preliminary La Nina outlook based on CPC analogs BACK IN NOVEMBER! 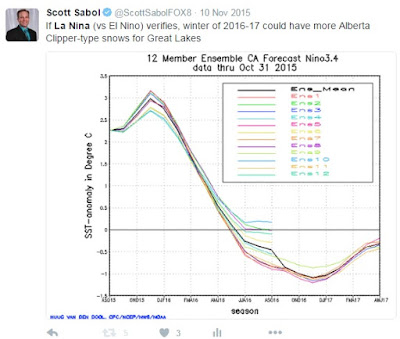 Recently, NOAA stated in their newest bulletin, very accurately, that El Nino was finished as of June 9th. These transitions don't occur instantly. The transition away from El Nino toward La Nina has been ongoing for months.

The region used in determining the state of the equatorial Pacific is the ENSO 3.4 region.

All Nino regions (especially the key Nino 3.4 region) temperatures have been falling since the start of the year.

This animation showing the ocean temperatures vs normal values show this perfectly. See the cooler water on the right side (east).

A larger spherical look at the ocean temperatures show the transition even better starting in January. The last image is what the mature La Nina looked like in January of 1999. 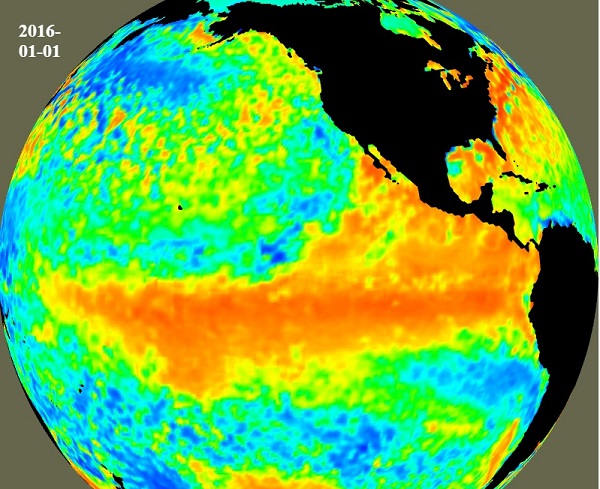 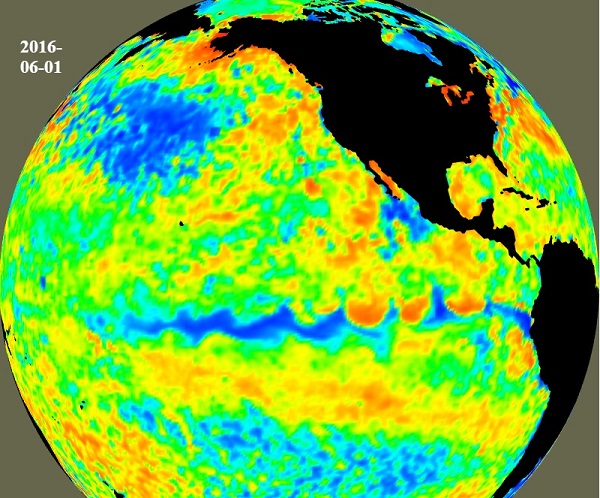 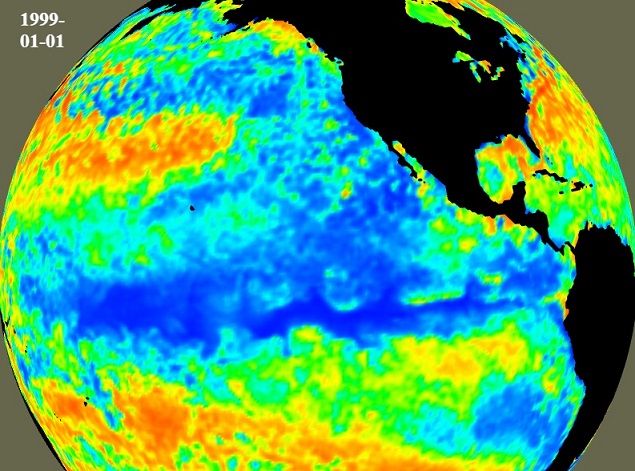 According Bob Hensen at Weather Underground, a recent study found that about a 1/3 of first year La Nina events returned of persisted for a second year. This behavior seems to be more frequent over the last 150 years.  It is possible that La Nina could linger into 2018.

It takes months for the effects of any ENSO state (El Nino, neutral or La Nina) to be reflected in the atmosphere. So its very difficult to predict at this time what the winter will be like for specific locations. But we can perform some basic albeit general statistical comparisons between snowfall and La Nina.

Using the ERSSTv4 ocean temperature dataset, a list of La Nina strengths can be determined. Hat tip to Eric Webb. 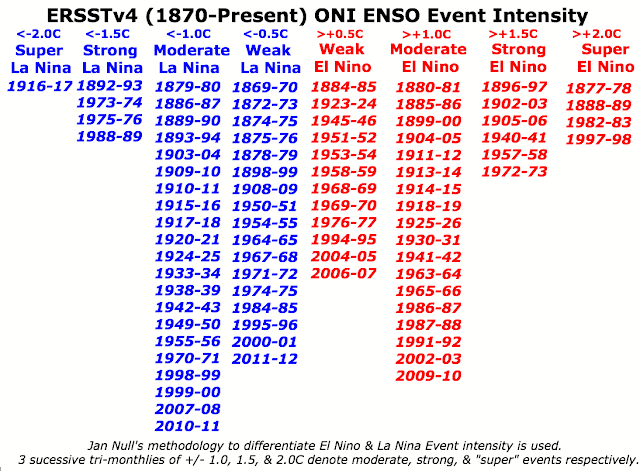 Based on these years and rankings, I matched up our Cleveland snowfall for these La Nina years. Here is what I found.  The majority of these years had ABOVE NORMAL SNOWFALL in Cleveland! 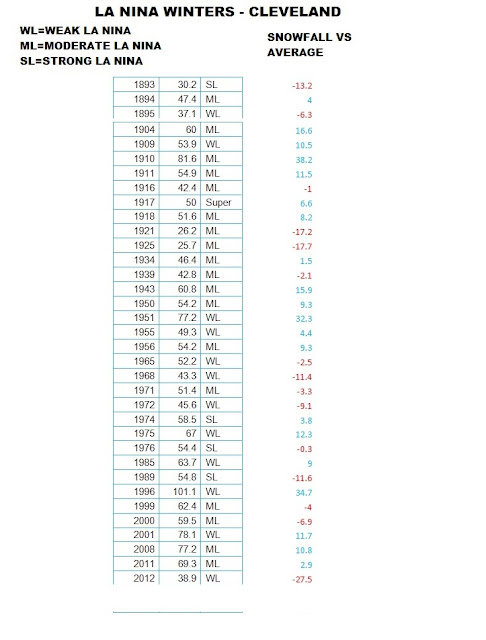 This is no guarantee of above normal snowfall during the winter of 2016-17 as there are other factors yet to be determined.

Is It Accurate to Say "It's Cleveland" When Talking About Our Weather? 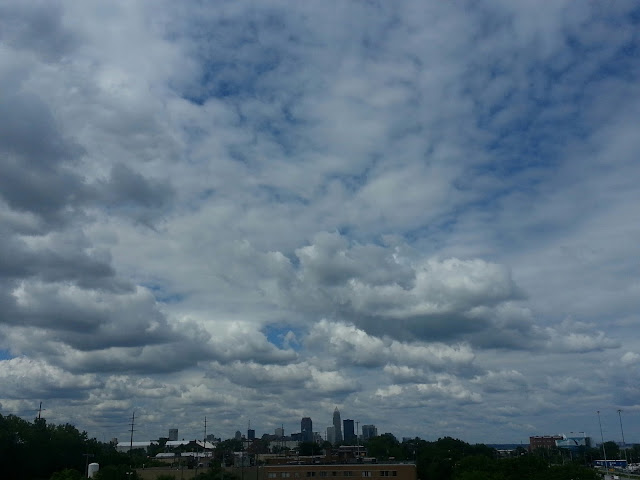 Good morning everyone. This is a pet peeve of mine so bare with me:

It's highly inaccurate to say "It's Cleveland" when making a GENERIC reference to our overall NE Ohio weather. I know I've upset many by saying this. We've been indoctrinated with this for decades and generations myself included. This phrase really only applies to winter conditions such as lake effect snow events or a strong lake breeze (especially in spring) which don't happen often. Most times (see image below showing the 6 week changes since early May) the changes are felt over a multi-state area! These regional changes don't originate here in northern Ohio nor are they religated to just northern Ohio. Again, the only exceptions that are strictly local in nature are Lake Effect snow events and lake breezes.