Email ThisBlogThis!Share to TwitterShare to FacebookShare to Pinterest
The dry conditions in northern Ohio are getting worse as the daytime temperatures reach the lower 90s coupled with higher humidity levels--heat index between 100 and 105--this weekend.  Many people are comparing summer to 2012 both in temperature and in degree of dryness. Is it a valid comparison? How do our dry conditions compare to other years in mid July?  When was the last time we had conditions this dry in mid July in northern Ohio?

The index that's used in determining the degree of dryness or wetness historically is the Palmer Drought Severity Index. It gives us a good barometer in comparing drought events of the past.

According to the National Drought Mitigation Center:  "The PDSI is calculated based on precipitation and temperature data, as well as the local available water content (AWC) of the soil. (Link here) From the inputs, all the basic terms of the water balance equation can be determined, including evapotranspiration, soil recharge, runoff, and moisture loss from the surface layer."

The more negative the number, the more severe the drought.  Whereas higher numbers indicate wetter conditions. Each week the Climate Prediction Center updates the drought conditions nationwide for each climate division. I circled Ohio for reference.

Email ThisBlogThis!Share to TwitterShare to FacebookShare to Pinterest
My HIGHLY Preliminary WINTER 2016-17 outlook showing the average temperatures for DECEMBER THROUGH FEBRUARY.  Yes it's early and no, its not too late to gather the pieces. This is will be revised later this summer and again in the fall. 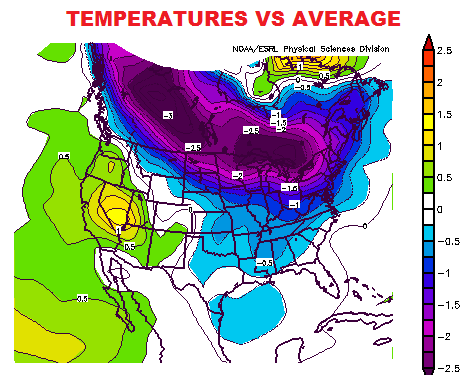 It is looking more likely that a weak La Nina (this post back in early June describes La Nina) will be the driver from the tropics this upcoming winter. Last winter, we had a very strong El Nino.

Take a close look at the snowfall numbers vs the 30 year average for these LA NINA years. I put this graphic together in early June.  HINT...HINT!

Again, all of this is HIGHLY PRELIMINARY and will need to be updated in the fall. This is why no specifics are indicated just general thoughts. 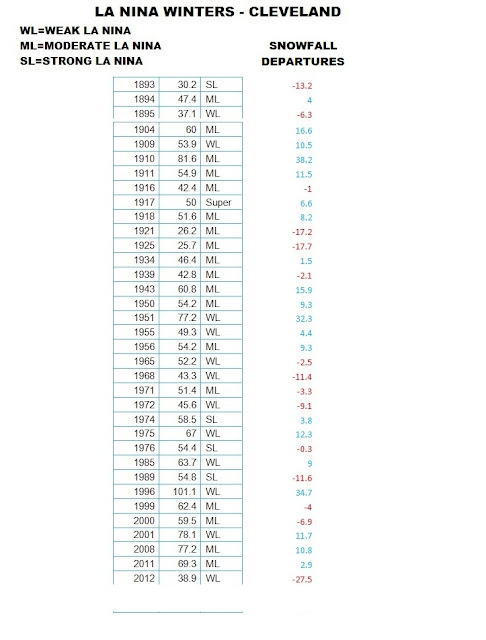