What Are Shelf Clouds?

Email ThisBlogThis!Share to TwitterShare to FacebookShare to Pinterest
Thursday, August 11, 2016 several strong thunderstorms passed over the Cleveland suburbs. Many viewers submitted photos of stranger cloud formations with some speculating that there tornadoes. What are these clouds?  Are they a rare phenomena?  Not really. These are called shelf clouds or Arcus Clouds. They are fairly common around thunderstorms even in northern Ohio. I blogged about shelf clouds over 10 years ago!

What are shelf clouds? The National Weather Service has a great description.

Normally, you will feel a burst of cooler wind followed by rain and maybe hail. The higher gusts occur on the back edge which can cause downed trees and power outages. So when the next storm develops, look for the Arcus Cloud. Remember that tornadoes normally don't accompany these cloud formations just gusty winds, rain/hail then the highest winds toward the back end. 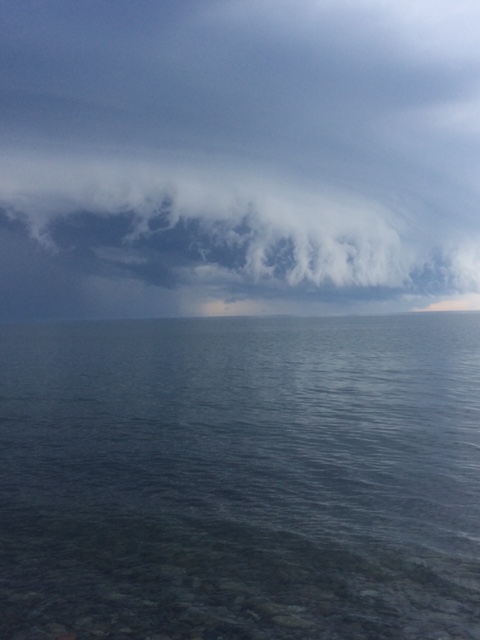 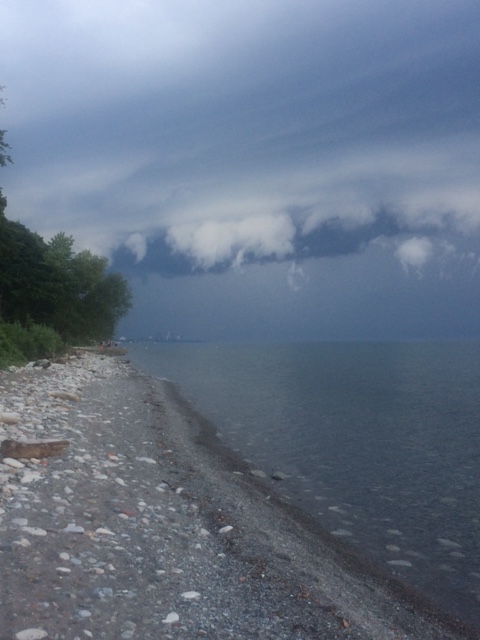 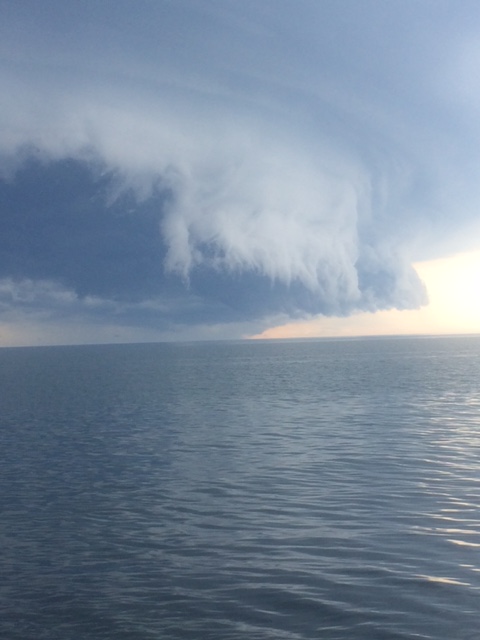 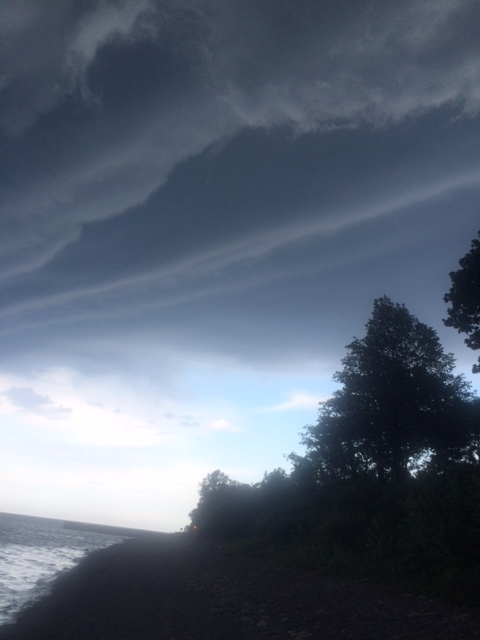 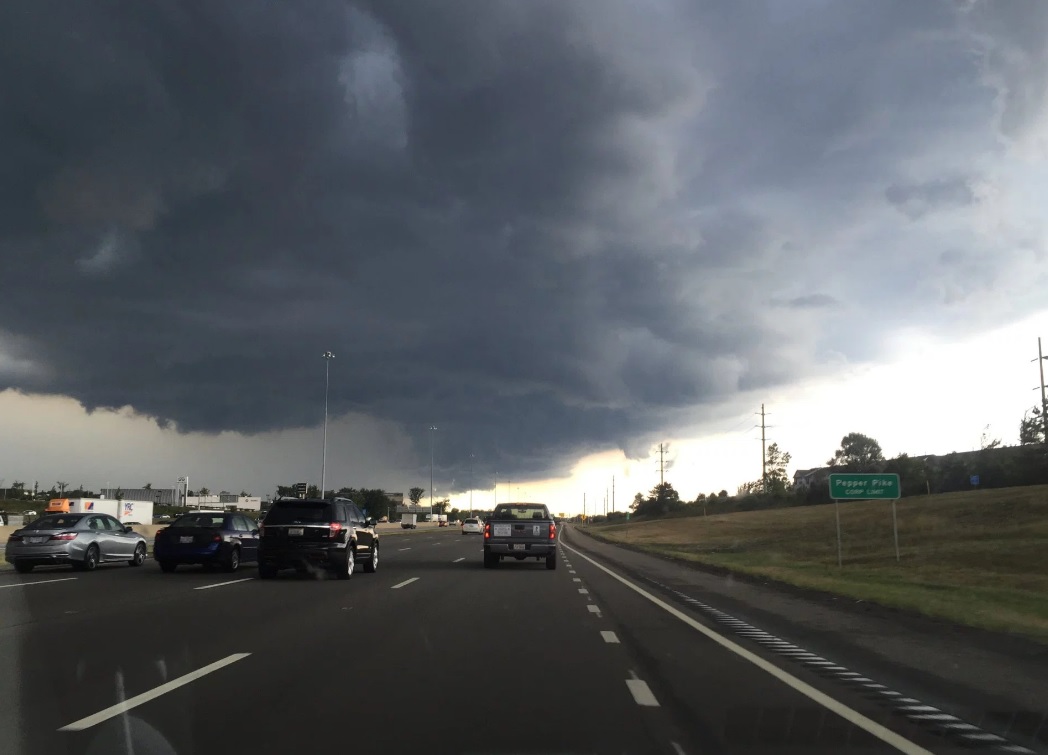 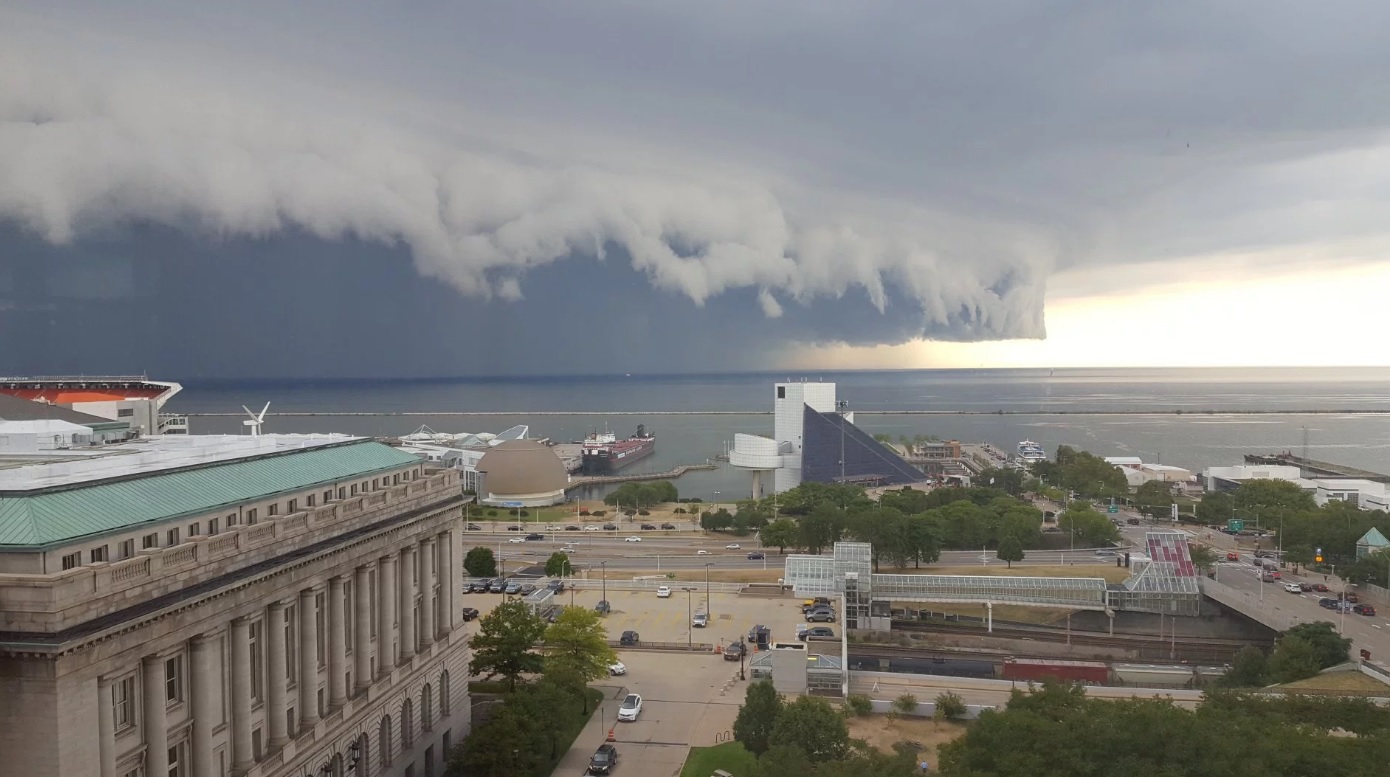 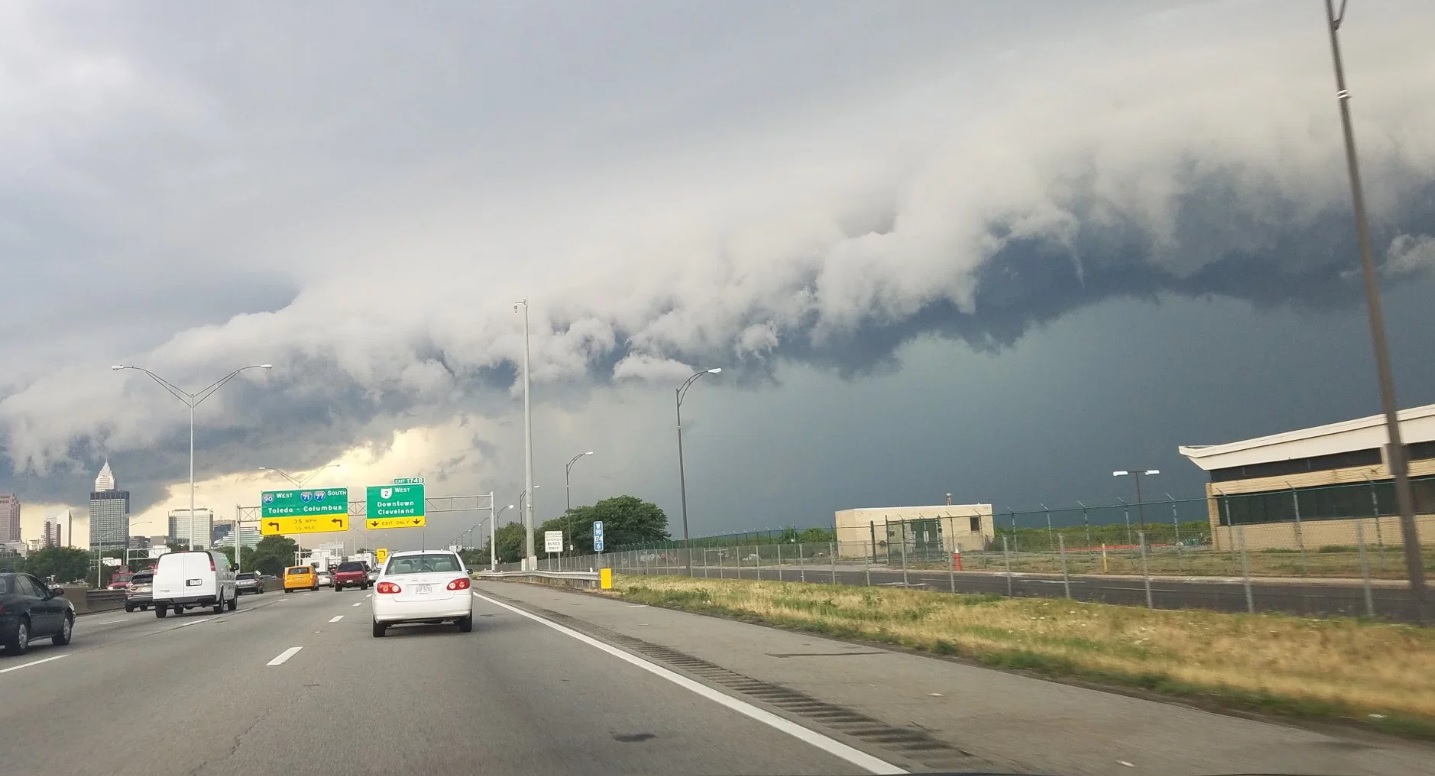 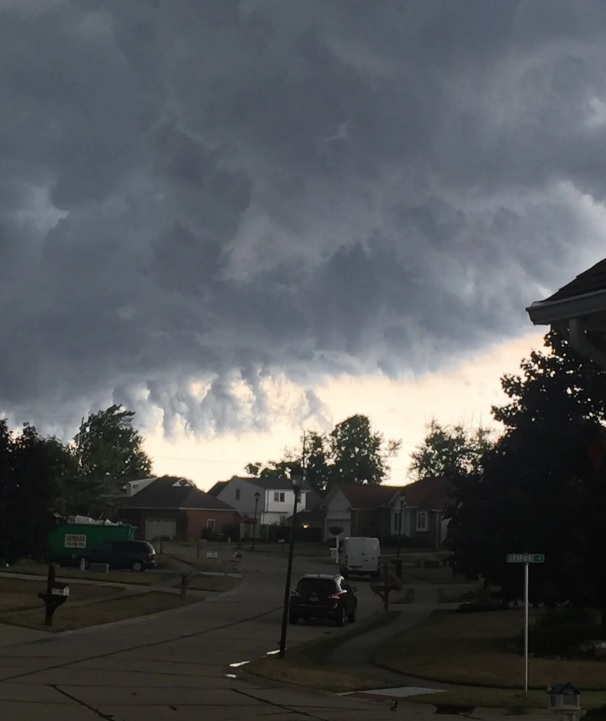 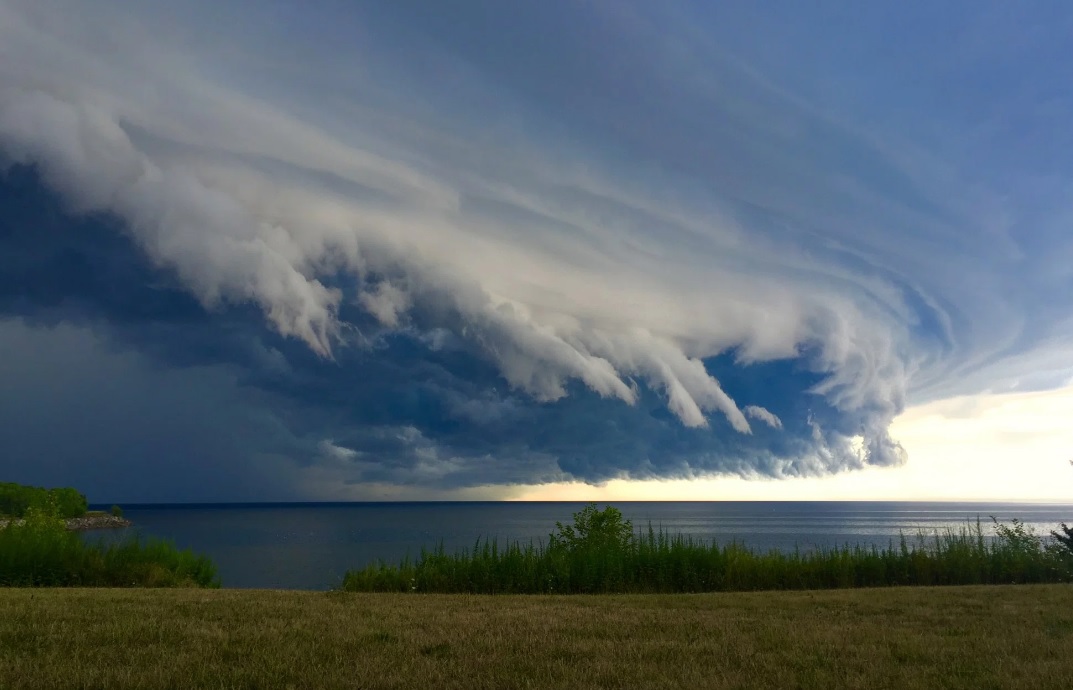 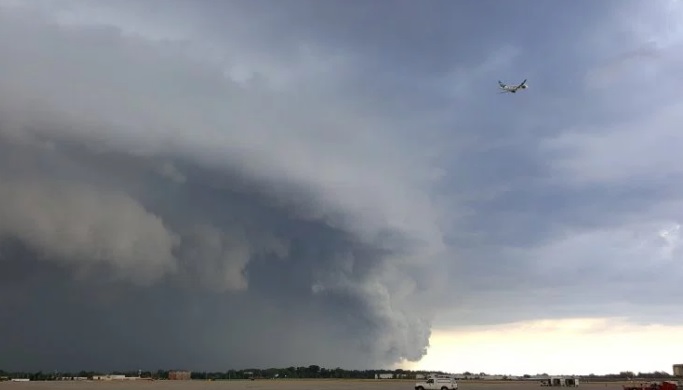 A Brief History of Drought in Northeastern Ohio 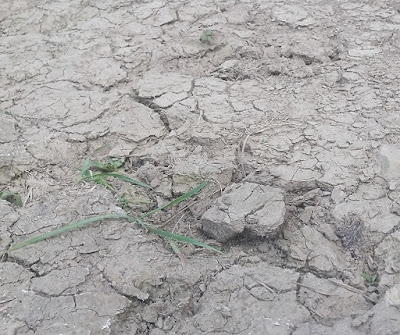 Since June 1st, we continue to accumulate a rainfall deficit across northern Ohio and many parts of New England. The overall pattern has featured storm clusters to travel northwest to southeast through the corn belt.  Yet much of northern Ohio, parts of Michigan and New England has missed out on frequent rainfall this summer. 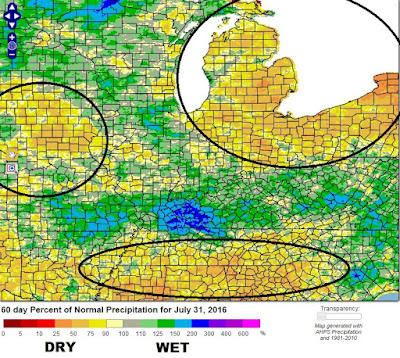 As with many meteorological events, people on social media are comparing this dry period to other droughts of the past. For me, the big droughts of 1988, 1991 and 2002 come to mind. 1988 always appears on the top of my list because of the intense heat that summer. I didn't mow a lawn for 3 months!

Is there a way of comparing past periods of drought accurately? The Palmer Drought Severity Index is a great tool in comparing historical periods of above or below normal dryness or wetness of an area.

Ohio has 10 climate divisions. I downloaded the historical PDSI monthly numbers for the northeastern Ohio climate division #3 and plotted them in roughly 30 year time periods. Green indicates wetter than normal, yellow shows drier than normal. THE SCALE ON THE LEFT CHANGES ON EACH GRAPH SO BE CAREFUL IN YOUR COMPARISONS

A few things to note based on these observations:

*  July 2016 PDSI is probably closer to -3.5. Montly numbers are not available as of this writing. 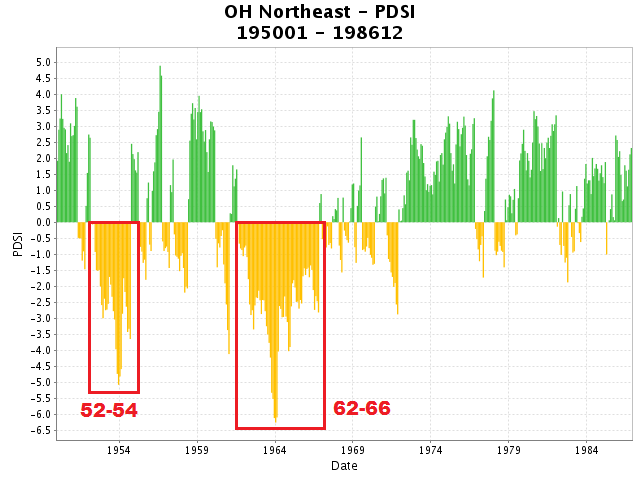 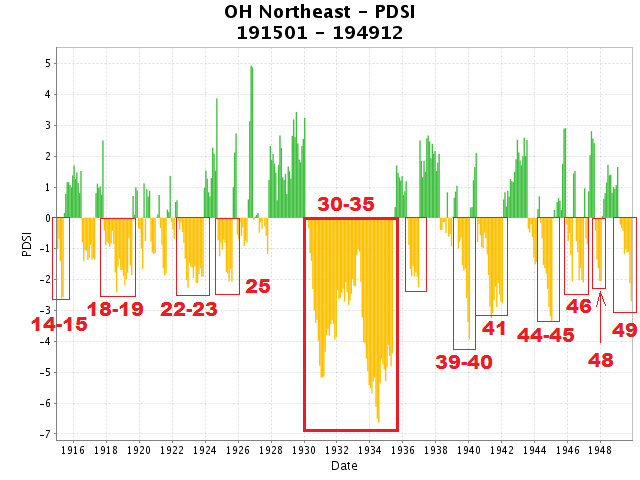 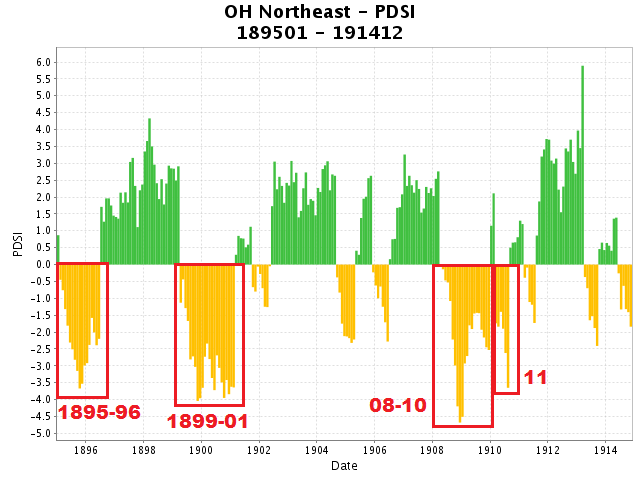 These graphs are great but they are annual monthly plots.  How about summer droughts? I singled out the summers (May through September) where PDSI levels stayed below -1. (NOTE: I CHANGED THE SIGN OF THE PDSI NUMBERS TO POSITIVE TO BETTER REFLECT THEIR SIGNIFICANCE GRAPHICALLY)

Some years to note:

* The summer droughts of 1991 and 1999 started off earlier and lasted into September. 1988 was tame in comparison.

*  During the summers between 1930 to 1934, fifteen of the twenty-five months had drought levels below -3.  During the 1960s' summer droughts, only six of those twenty months saw levels that dry.

* Yes, our soil moisture is significantly dry. But we have a long way to go before this drought becomes historic 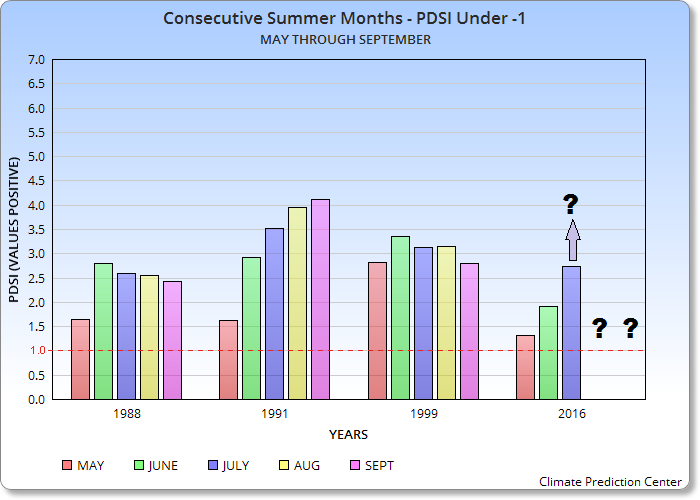 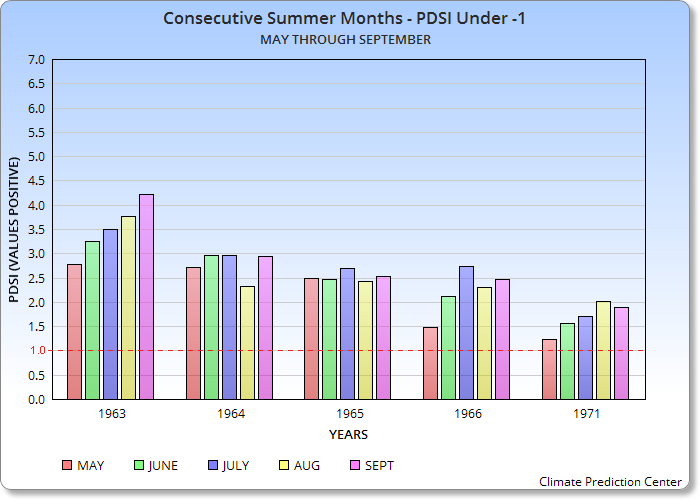 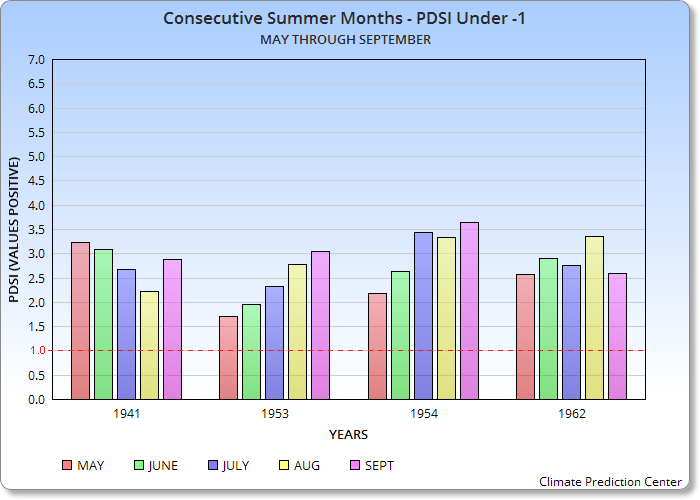 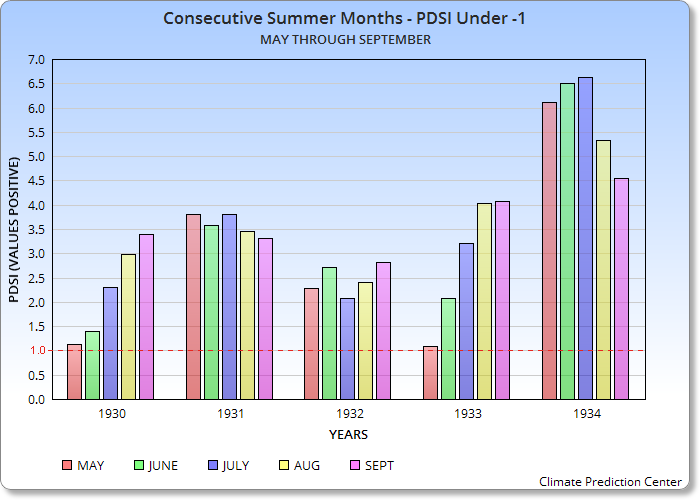 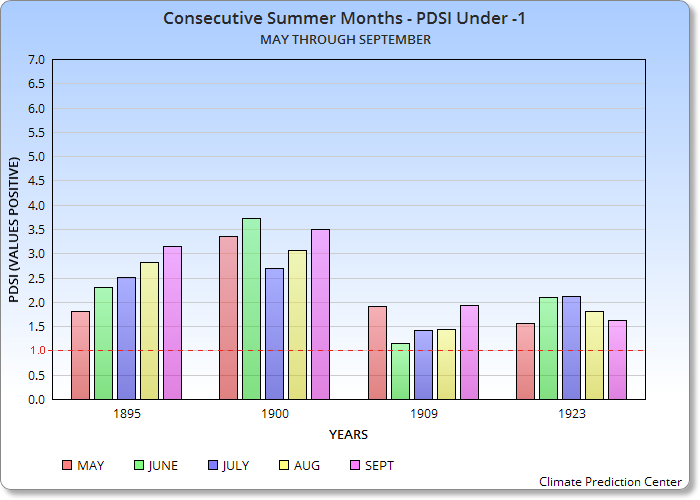