If Hurricane Matthew Rain Was Snow, How Much Snow Would You Have? 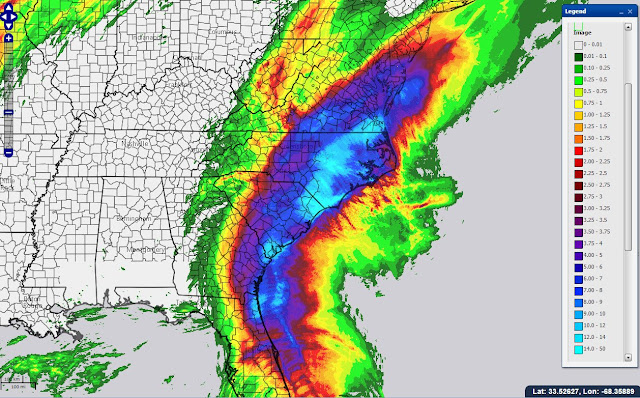 13.6 trillion gallons of water fell on the 5 state region (Florida, Georgia, North/South Carolina and Virginia) from Hurricane Matthew. This amounts to only 1% of the total rainfall across the continental United States this year. Hat tip: Ryan Maue

It's very hard to wrap our minds around what a trillion gallons of anything looks like. But what if this water was lake effect snow?  How much would it amount to?  How much snow would cover the entire state of Ohio? 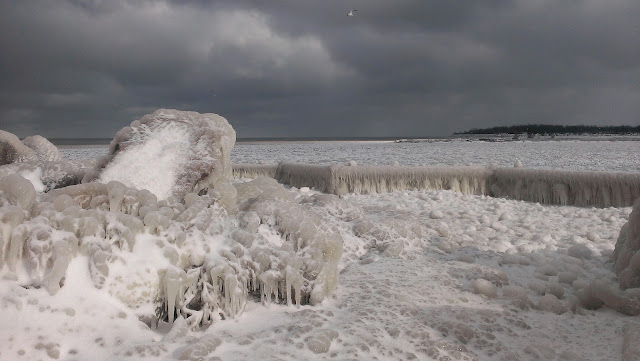 Here is how you would calculate this:

Divide the two and convert to inches yields roughly 17 inches of water over the entire state of Ohio.

In order to convert the water to snowfall, we need the snow ratio.  That is the amount of snow per one inch of liquid. The problem is lake effect snow can have a ratio from 20 to 1 to almost 40 to 1 depending a variety of factors.  So let's take the lower conservative end:  20 to 1.


28 feet of lake effect snow over the the entire state of Ohio
at 7:19:00 AM Posted by Scott Sabol 2 comments:

I haven't seen a National Weather Service discussion with language this strong since Hurricane Katrina 11 years ago: 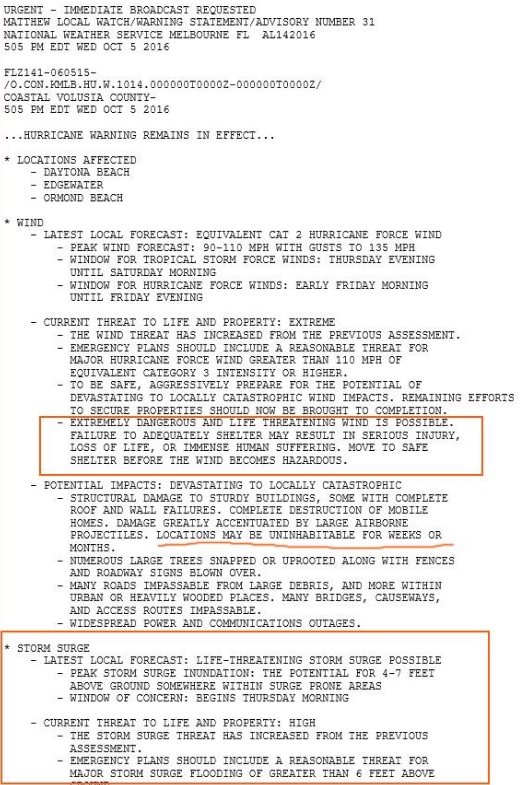 Statement from the National Weather Service office in New Orleans before Hurricane Katrina: 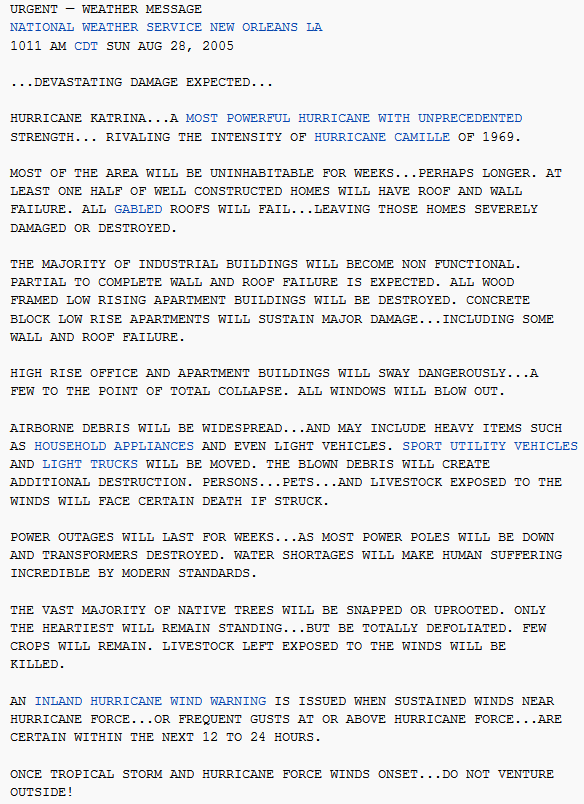 Summer of 2016-17 was the warmest on record in Cleveland and at many recording stations across northern Ohio.

Regarding how you define summer (see Part I in previous post), it was the warmest ever!

Summer temperatures versus average over the last 10 years. 2010 and 2012 were the closest to this past summer. 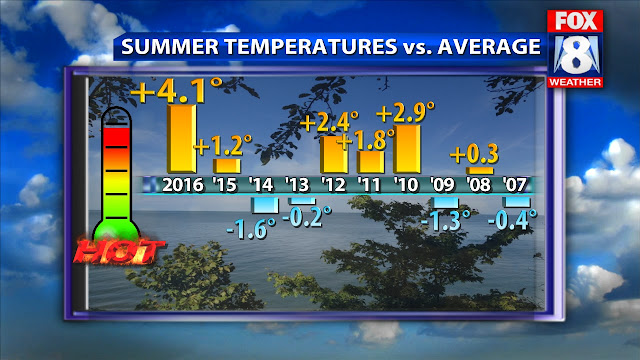 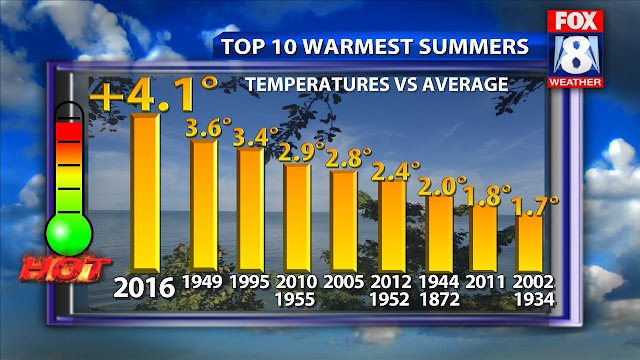 We typically remember past weather for its extremes not averages. Although we didn't break many daily records, the warmth was steady both day and night. 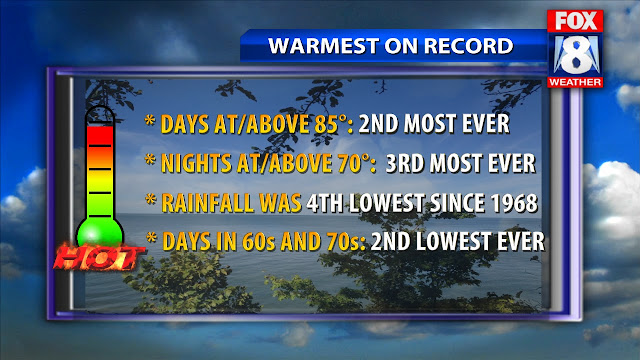 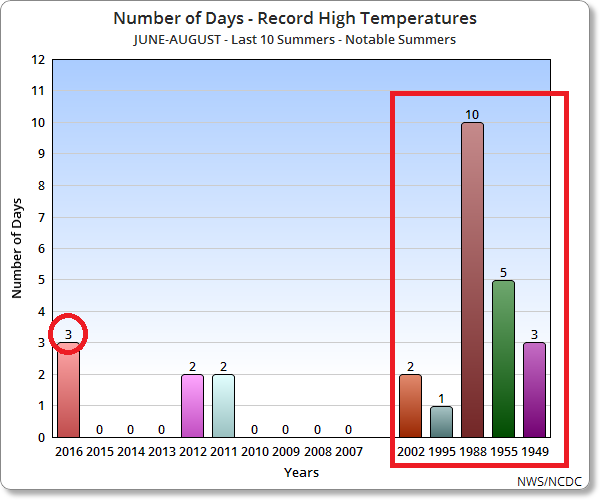 Second most number of days at or above 85 degrees ever! 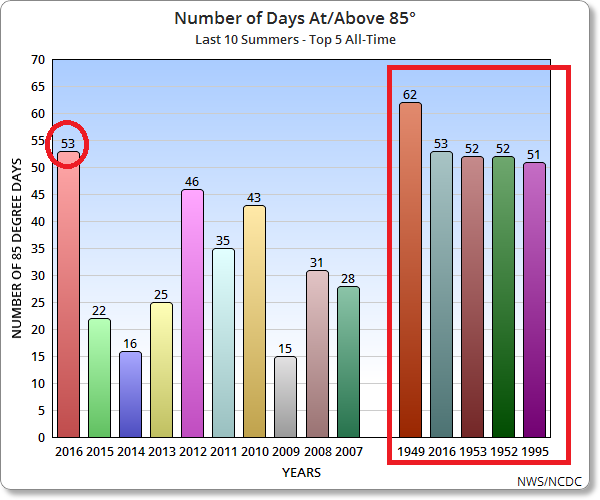 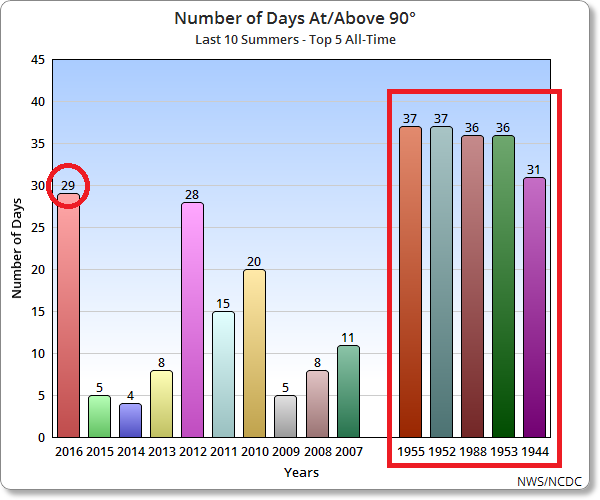 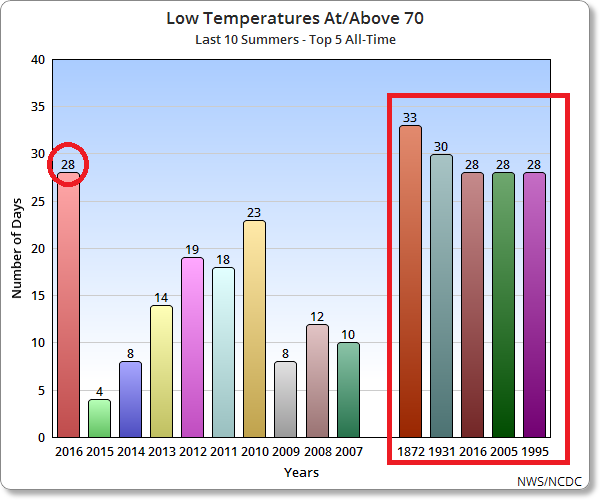 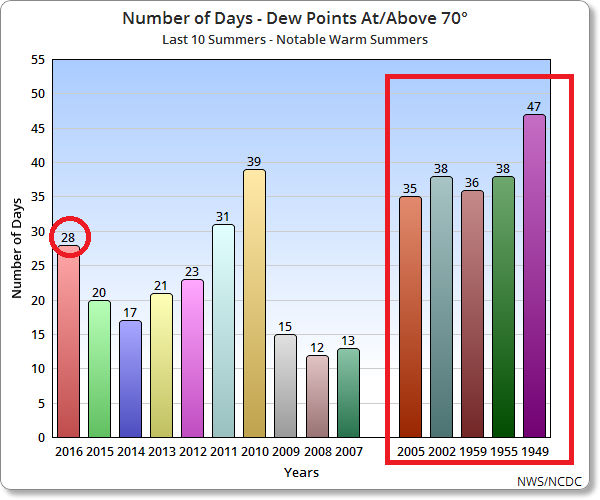 Relative cooler days were few and far between... 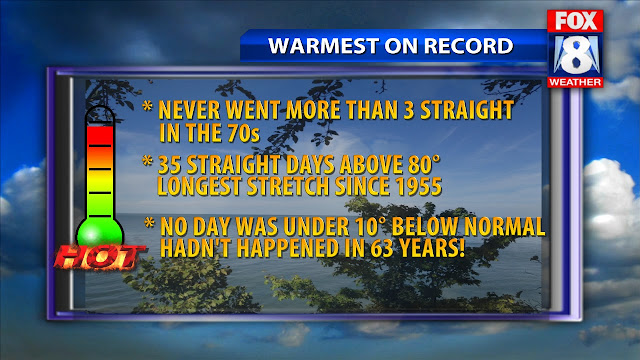 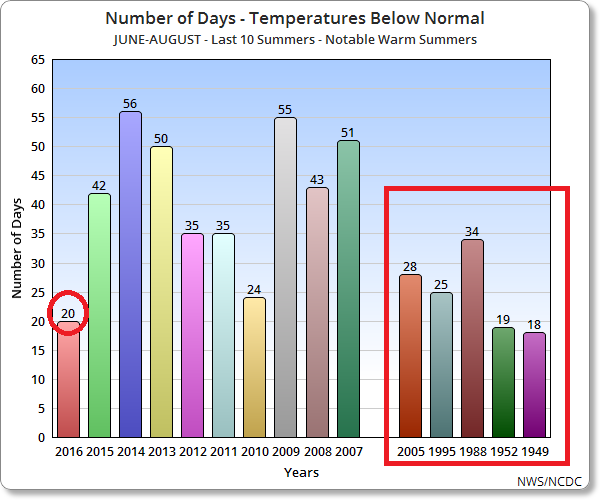 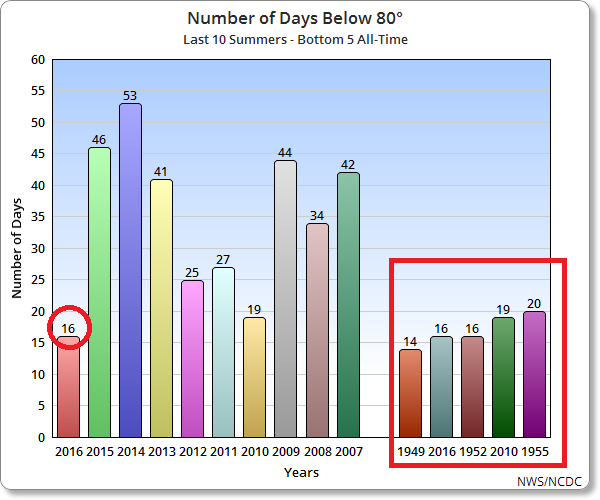 Our rainfall was well below normal for the first time since 2012, driest since 2002. Four of the last six summers have had above normal rainfall. 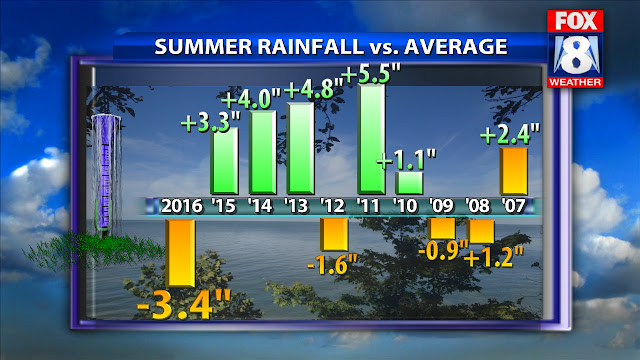 Many use the drought year of 1988 as the standard for which we measure very dry summers. Interestingly, this summer's rainfall was nearly identically to 1988.  Yet 2016 and 1988 didn't crack the top 10 driest. 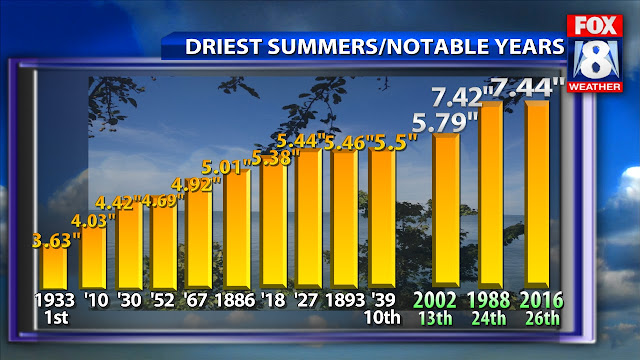 Summer rainfall varied from place to place. Only Mansfield made it into the top ten driest on record. Cleveland 26th and Akron 35th. 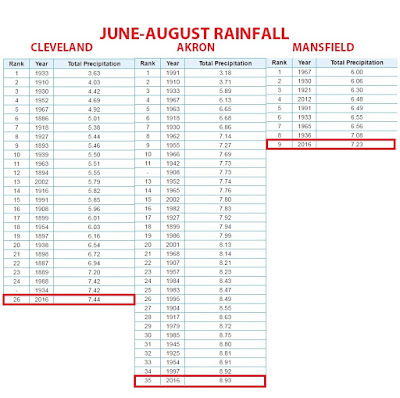 The storm track took the majority of the rain and storms through the heart of the corn belt. 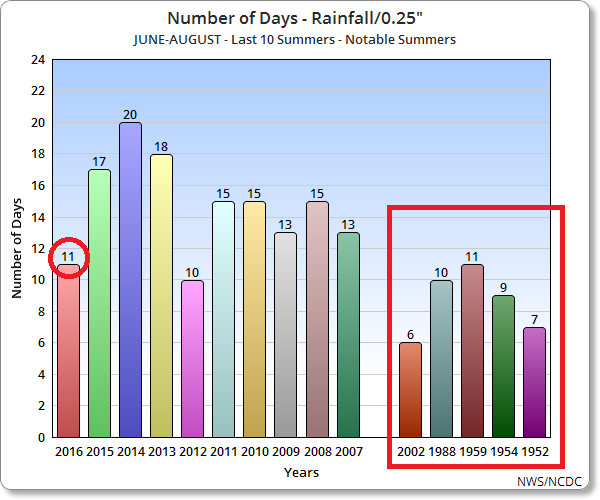 We forget that 2002 and 1991 were consistently drier than 1988 and 2016 even into the fall. This year, the rainfall deficit has improved with recent late September rainfall. 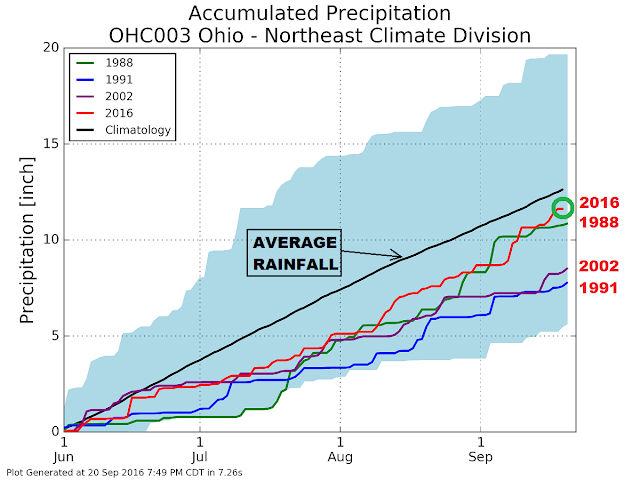 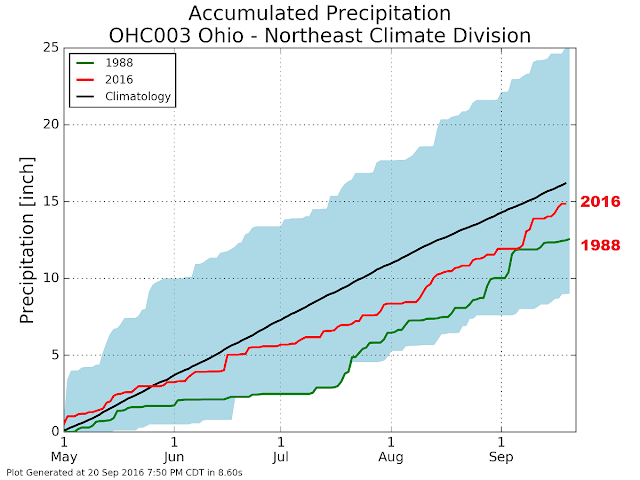 In my next post, I'll talk about how the above average Lake Erie water temperatures this summer compare to warm summers of the recent past and how that might impact lake effect snowfall.

WILL THIS WARM SUMMER LEAD TO A REPEAT OF LAST WINTER (MILD WITH LITTLE SNOW)...OR WILL CONDITIONS REVERT BACK TO THE WINTERS OF A FEW YEARS AGO? THE COMPLETE WINTER OUTLOOK COMING IN 4 WEEKS!

HERE IS A BIG HINT!