Do The Defensive Trends Shed Light on NBA Offensive Increase?

Email ThisBlogThis!Share to TwitterShare to FacebookShare to Pinterest
The previous post looked at the dramatic increase in 3-point field goals and other offensive statistics over the last 30 seasons. Do the rate of steals, turnovers and personal fouls per game shed any light on this?

* Turnovers per game started dropping from 1989 through 2000 with a leveling off over the last 10 seasons.

* Steals per game started dropping in the late 1990s with some leveling off for brief period over the last 15 seasons. 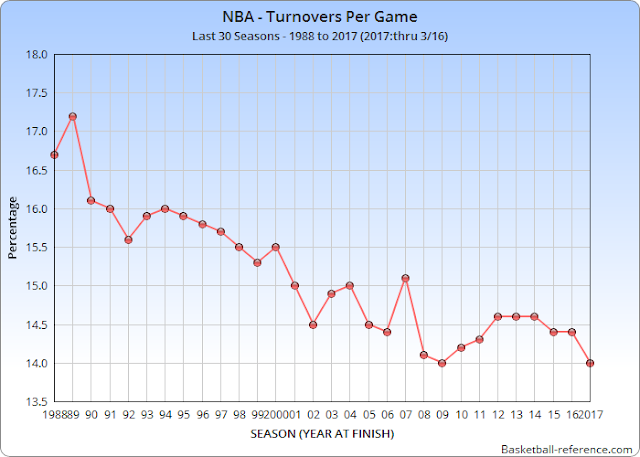 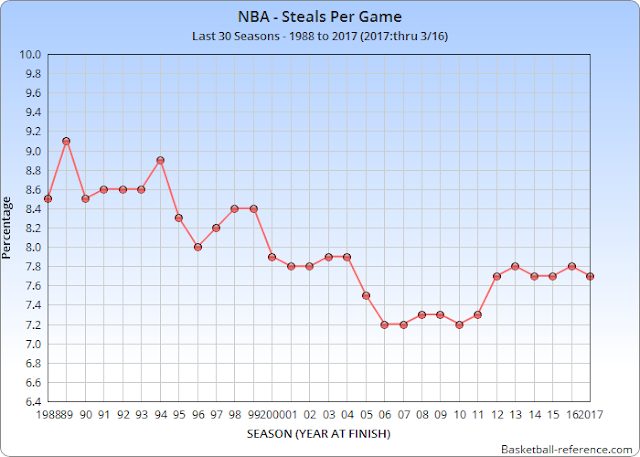 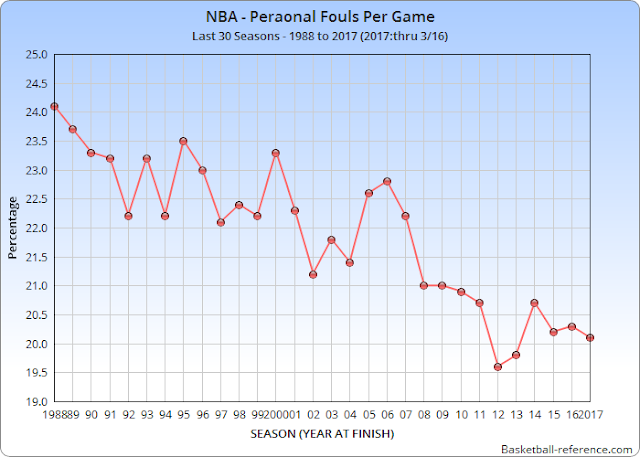 How Has The NBA 3-Pointer Usage Changed Over Time? 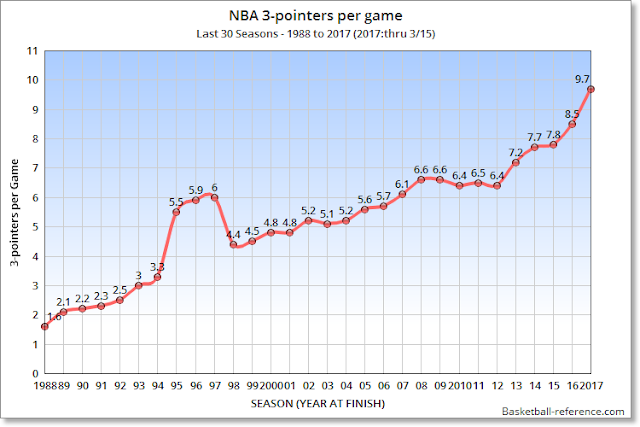 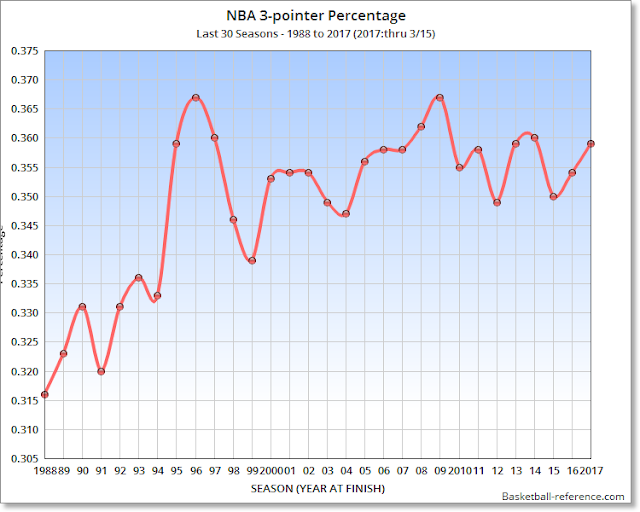 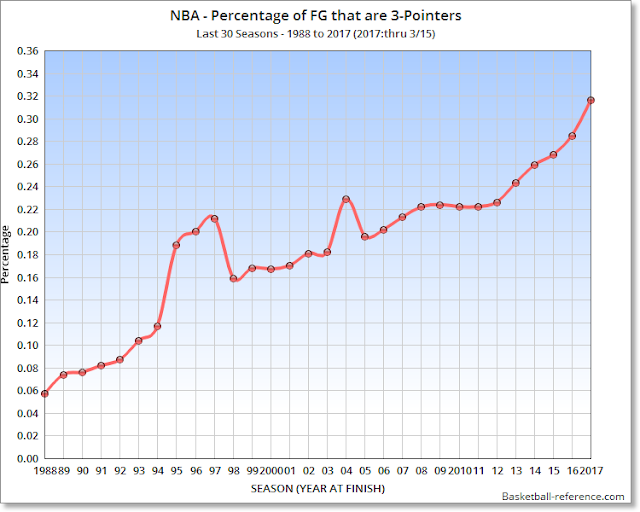 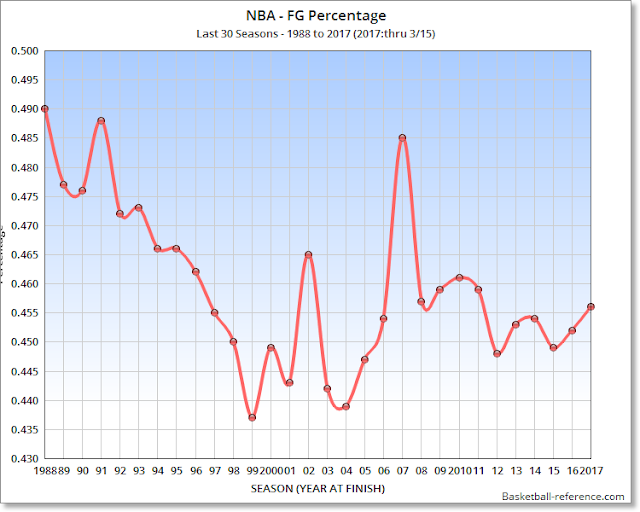 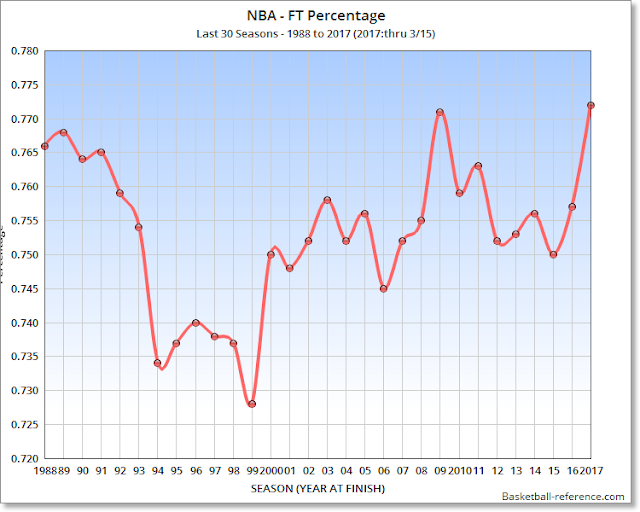 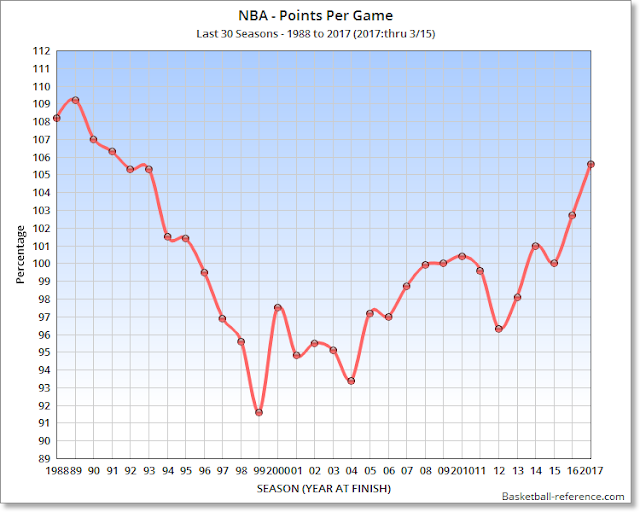 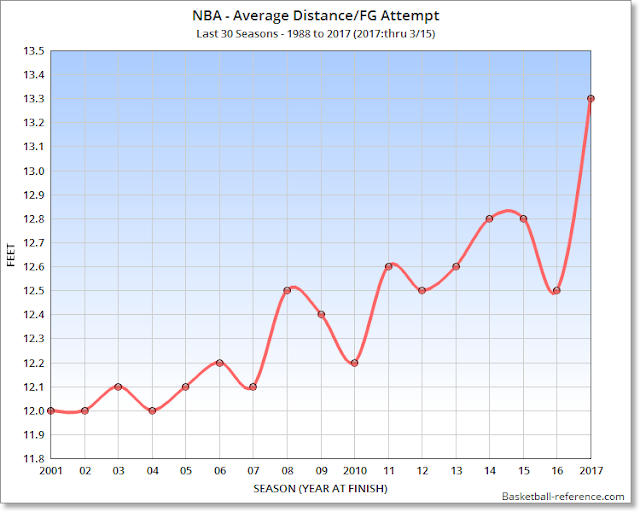 We just experienced our first severe weather event during the morning show in almost 3 years.  Given the volatile history of the storm system which was responsible for baseball size hail and one fatality from a tornado in central Illinois, we knew this event had pretty high potential for severe storms and a tornado warning or two.  We mentioned the increased likelihood of strong/severe storms more than 24 hours before the event.

If you familiar with my weather casts, you know that I rarely use the word "severe" to describe storms unless the situation warrants it.  The reason why is simple: When most people hear the word "severe" when describing storms, they immediately think "tornadoes".  The last thing I want to do is invoke the idea of tornadoes when in most severe storm cases (less than 10%) the chances of a tornado occurring are small.

Tuesday morning--24 hours before--was one of those instances where I used the word "severe" multiple times to describe the next day's outbreak. The possibility of northern Ohio going under a severe thunderstorm watch was high enough to be included in the forecast. All high resolution projections showed two distinct severe storm clusters tracking across Ohio between 12am and 8am. It was the second one that had us concerned not only because of it's elevated severe weather potential but because it was developing overnight when most people are sleeping. This animation below was generated at 1am Tuesday more than 24 hours before the event:

The two severe storm clusters projected location at 1am Wednesday. 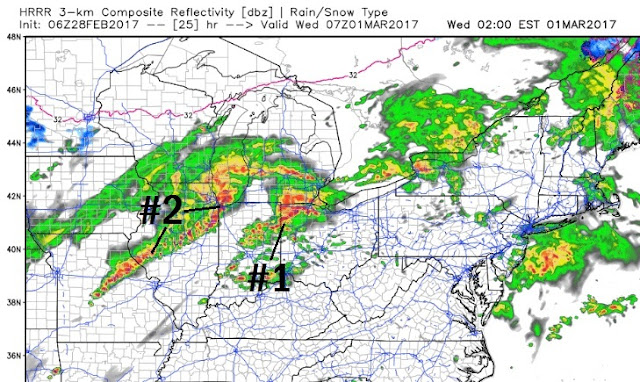 By Wednesday morning, the second storm line above had already produced a strong tornado in central Illinois and one fatality.  That same storm produced baseball size hail.


The Storm Prediction Center had issued this discussion specifically for the second line of storms BEFORE the severe thunderstorm watch was issued at 3:25am. See the strong wording below.


The severe thunderstorm watch was issued a few hours later for ALL of northern Ohio. Remember, on FOX8News This Morning the day before, we mentioned the strong possibility of a watch being issued.

Several tornado warnings were issued for portions of CUYAHOGA, GEAUGA, SUMMIT. MEDINA AND PORTAGE counties between 6 and 6:30am Wednesday morning by the National Weather Service due to rotation being detected by Doppler Radar. By 7am, the line was east of northern Ohio. The Severe Thunderstorm watch was discontinued from west to east.

Yet even after a potentially dangerous situation like this, there continues to be individuals especially on social media who question how we covered the event. For the record, I always grade myself after events like this. Did I do everything right?  Did I convey the seriousness of the event without blowing it out of proportion?  I can honestly can that I wouldn't have done anything different.

In the weeks ahead, we'll talk about the advancements of severe weather prediction and communication.