Why The Abrupt Cooler Pattern in the Northeast?

Email ThisBlogThis!Share to TwitterShare to FacebookShare to Pinterest
After the warmest April on record in places like Cleveland, Ohio and across much of the Ohio Valley and much of the eastern US, the pattern has not only reverted back to spring, it took several steps back resembling elements of winter. Throughout April, this high pressure ridge stayed east which allowed the ridge across the eastern US to build allowing above normal temperatures. Many were fooled into thinking that summer was here and we were in the clear to plant gardens. Not so fast!

Look at April temperatures versus the 30 year average: 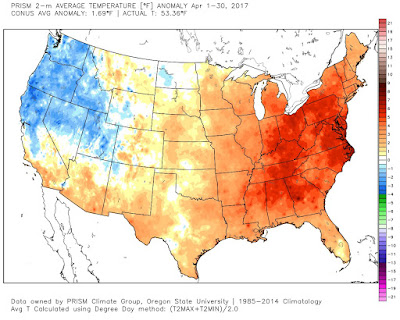 Now look at the first week or so of May per the American model (GFS). 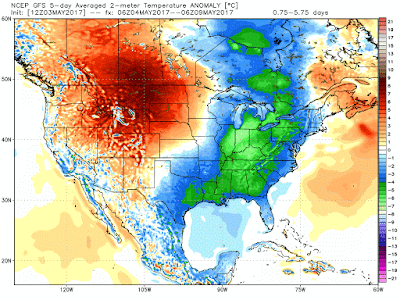 Why the sudden flip?  In this case, we have to look over Greenland for the answer.

Remember that across the mid-latitudes, troughs and ridges (valleys and peaks in the upper levels of the atmosphere) travel like a fluid through the atmosphere. When one location is lucky enough to be blanketed by a ridge, fair weather typically is the result. Once the succession of trough and ridges is changed by an interruption in the wave pattern, the weather will change at the surface. These changes (too much to go into here. See Southern Oscillation Index) often originate over the Pacific Ocean and propagate east. Currently, these changes are reflected over the northern Atlantic and Greenland.

We can quantify the strength of this ridge using the NAO of the North Atlantic Oscillation.  The more negative the index goes, the stronger the Greenland ridge. The NAO has been forecasted to drop close to -300. Historically this has only happened once in the month of May since record keeping began.  That was back in 1993. 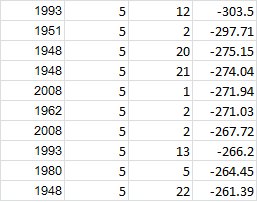 But be warned, historically, this pattern over Greenland in May doesn't always produce a cold and rainy May. Look at the high temperatures in Cleveland during these years of record low May NAO:

Look at the resultant upper level pattern across the US in each of these years. All but 1948 and 2008 show dominant warmth.