Will Opening Day 2020 at Progressive Field be "COOLER THAN NORMAL"?

Email ThisBlogThis!Share to TwitterShare to FacebookShare to Pinterest
If you recall from my blog a few weeks ago when I dove deep into why the winter pattern was abnormally warm, one of the drivers was the lack of ridging over Alaska.

Now, the models are strongly showing a monster ridge late this week/weekend.

Recall what happened back in November when the ridge was locked in. Plenty of cold across the eastern US.

The ridge looks incredibly strong for this time of year. 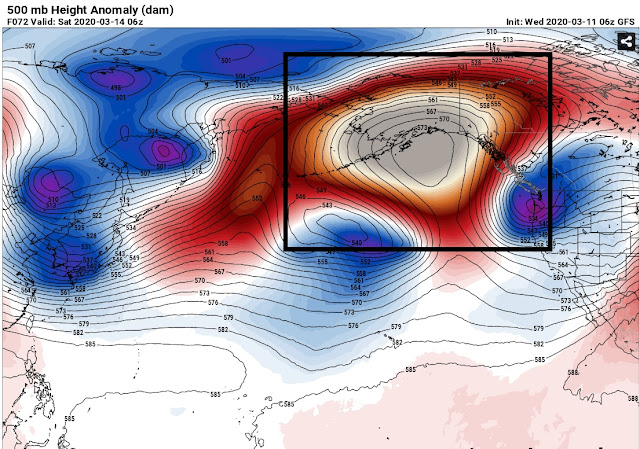 Based on the strength of this huge Alaska ridge and comparing this to the top 5 years similar (hat tip: Brian Brettschneider) the surface temperature departures for +2 days later through +14 days later look colder than normal the last full week of March for the Ohio Valley and northern states! (March 16 thru 28th).

The EPO is strongly negative

The MJO is also heading into a cooler phase. 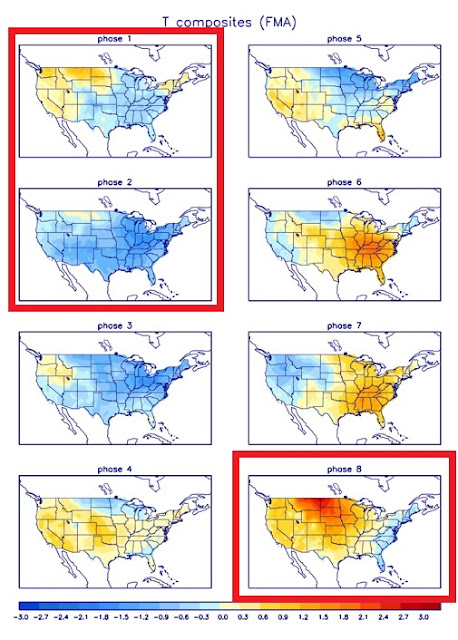 The MJO isn't as strong as what it was earlier in the winter so IMO this won't be as much of a driver if it stays weak.

CIPS analog (based on the GFS) is still warm east between March 21 and 24. This should start to correct COLDER east in the days ahead. 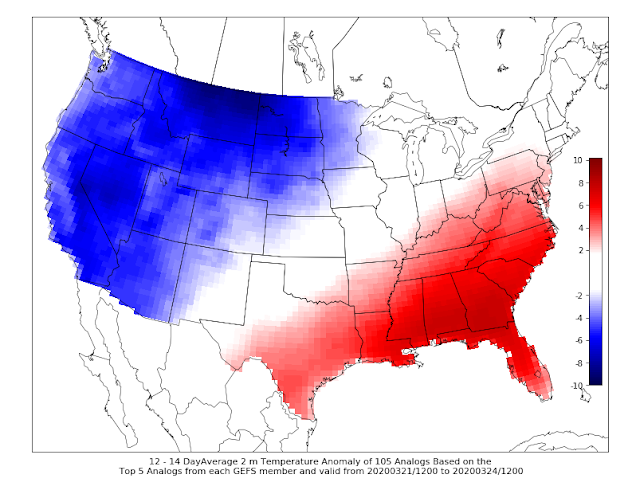 Good possibility that temperatures could be COOLER THAN NORMAL for Opening Day here in Cleveland. Normal high for March 26 is 51°. We could end up with mid/upper 40s more days than not that week!

Email ThisBlogThis!Share to TwitterShare to FacebookShare to Pinterest
Checking the SOI late last week (February 28th) showed a sharp 25 point rise between February 19-21st. The SOI composites for both a neutral winter and an El Nino winter show weak central US pressure centers. No significant large scale blocks or deep troughs over the next 15-18 days from the composite starting point of February 20th. This should translate to a overall west-to-east movement on storm systems. Most of these will be rain producers for the Ohio Valley.  Any changeover to snow would be brief. These maps are for ~ March 7-10th
The MJO is now in the inner circle. A far cry from the higher magnitude MJO from earlier in the winter especially January. The overall monthly temperature composites show a more transient temperature setup across the central US/Ohio Valley through the middle of March


EPO (Eastern Pacific Oscillation) teleconnection last Friday showed two dips into negative territory.  One around the 7-9th and another less confident dip at mid-month. The first dip coincides with the SOI composites from above.


Today (5 days later) the EURO and GFS ensembles have backed off on the second dip (mid-month). The EURO is more bullish on a colder pattern than the GFS.

Also Remember the "???" on Figure A above?  The SOI is now showing a sharp 32 point drop 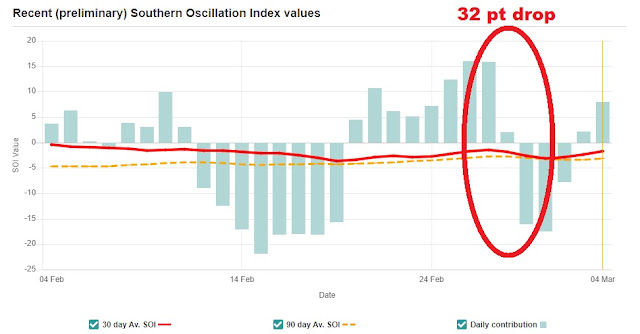 Looking at the SOI composites (17-20 days out from the starting point of Feb 27-29 which puts us at roughly March 17-20th) the answer gets even more murky. The composites couldn't be more opposite. One shows a strong SE ridge/active central storm systems.  The other shows the SE ridge more suppressed with a more active panhandle storm track.

The northern Pacific pattern has been progressive. No sustainable ridging over the Bering Sea or over Alaska. Fast flow aloft is keeping LOWS barreling east from out of central Asia, over the Pacific and into western North America. 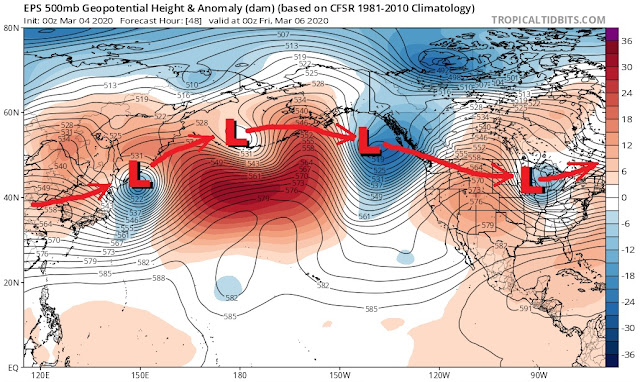 Based on all of this we can conclude the following for the first 3 weeks of March:

* Temperatures should stay near/slightly above normal
* More days in the 50s overall
* Rapid west-to-east flow will keep storm systems moving frequently across the central US
* Small periods of colder air still possible. Light snow is not off the table.
* Watching the period of March 17-20th