Playoff Teams With Little Outfield Offense And Top Notch Pitching? A Look At The 2020 Indians

Cleveland Indians pitching has been stellar during this shortened COVID season. Shane Bieber is pitching like Sandy Koufax. He'll be a serious Cy Young contender. Aaron Civale, Carlos Carrasco along with Zach Plesac and Triston McKenzie anchor the starting staff. Even after trading Clevinger and the current losing streak, the starters still rank 3rd in FIP (ERA minus defense). They're striking out more than 10 per game and walking just north of 2 per 9 innings. Prior to the current losing streak, the team FIP was 4th lowest of any Indians' team since 1980 (1981, 2014, 2017). Relievers are no slouch with a FIP ranked 3rd only behind the Dodgers and Athletics.

However, the Indians lack of offense has had me concerned as the post season approaches specifically their outfield offense. This is nothing new. I'd argue the Indians haven't had a big outfield bat since Manny Ramirez. When I started compiling the data for this post 2 weeks ago, I hesitated to post it. I wanted to wait to see if some change would occur for the better since the trading deadline. Between September 7 and 16, they dropped 8 in a row. (Note: The streak just ended at 8)

Prior to the losing streak, Indians pitching was stellar with top 10 in most categories. During the losing streak, the pitching has ranked near the bottom. No surprise the pitching regressed a bit. That's to be expected over the course of a season. But the fact that their overall offense got even worse is worrisome. Runs per game has dropped to 2.7 during the streak vs 4.2 RPG during the first 41 games. Total team Runs Created (wRC+) was 86 before the streak. The last 8 games: 72!  Mainstay offensive infielders' production (Ramirez is the exception) dipped during the streak.

Ironically the Indians outfield which ranked second to last (only the Pirates are worse) in runs production before the streak has been more productive but still below league average.

Above 100 is considered above league average.

All of this begs the question: Can a team with top tier pitching reach the playoffs with an anemic outfield offense?

I checked the playoff teams over the last 10 years and compared each team's OUTFIELD wRC+ (ability to create runs). Most are above 100.  2020 Indians circled in red. 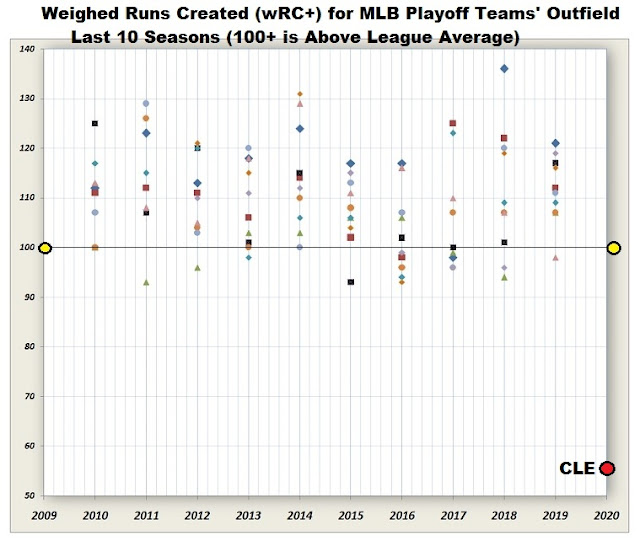 Since this is a small sample size, I checked all teams' outfield wRC+ over the last 40 seasons (since 1981). Since there are more than 1100 separate team seasons, I separated the graphic into 5 year increments. Red indicates playoff team. There aren't many below 90. 1985 Kansas City Royals are one that stand out

How do we integrate team pitching?

The scatter plots below shows the wRC+ vs Team FIP.  They're posted in three parts: First is all 1114 teams' seasons since 1981 (1114 total), second plot adds the teams that made the playoffs (red). The third plot are the 2020 teams added (yellow).

2020 seems a bit different. More teams seem to have weaker pitching AND below normal offense. It's reasonable to think that these teams are not in contention. Sure enough, the combined winning percentage of these 10 teams is only 0.407!  The Indians seem to be the outlier.  High end pitching and weak total offense.

Notice that in this season Pittsburgh and Cleveland have the sharpest drop off in outfield production.

If history is any indicator, top tier pitching in most instances, will not make up for the lack of outfield offense.  Then again, the 2020 season is a different animal. Maybe with 2 weeks to go, it'll be enough to get in.

How Was The Labor Day 2020 Rain Event Different From The 1996 Record Setting Rain Event?

The Labor Day Rain is a weather event that we will remember for some time. Not only did it occur on a holiday, it came very close to breaking the all-time single day rain record in Cleveland set back in 1996, 24 years to the day earlier!

How are these two rain events different?

I downloaded the radar imagery from the National Climate Data Center and created an animation for September 6-7, 1996 when the well organized remains of Hurricane Fran passed over Ohio. Notice how long the rain stayed over the area. Rain was reported at the NWS at Hopkins Airport for almost 24 straight hours!

Now compared it to the radar loop from the Labor Day 2020 rain event:

The main difference between the two events was the duration and intensity of the rain. The 1996 event featured more consistent and steady rain as indicated by the yellow radar returns from the tropical system (Fran). The 2020 event was heavier (orange and red radar returns) with elongated bands along with bursts of higher intensity rain from a stationery front.

Many people have also asked how the rain on Labor Day will impact the Lake Erie water levels. Since we haven't had an event like this since 1996, we'll use it as a base for comparison.

The graph shows the Lake Erie water level from September 6 to September 9. 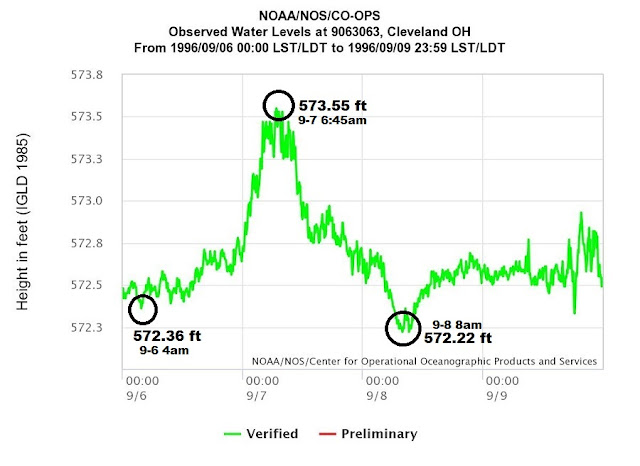 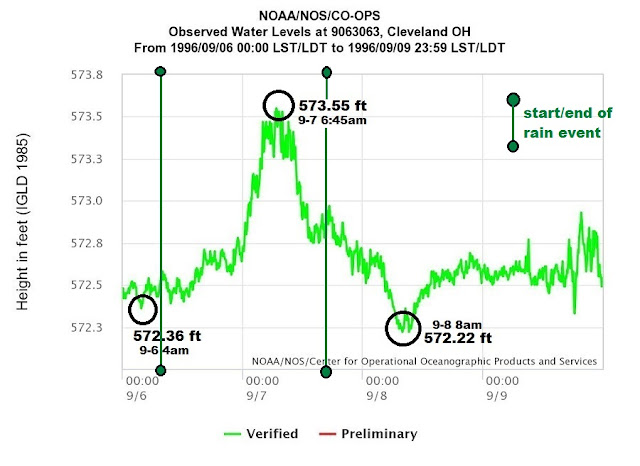 Now the Labor Day event over the same time frame. 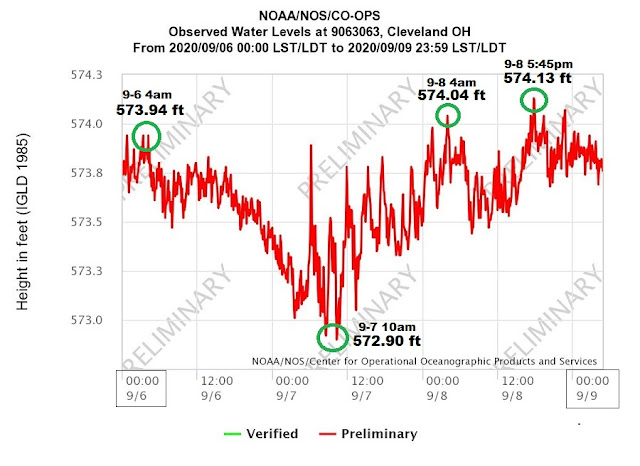 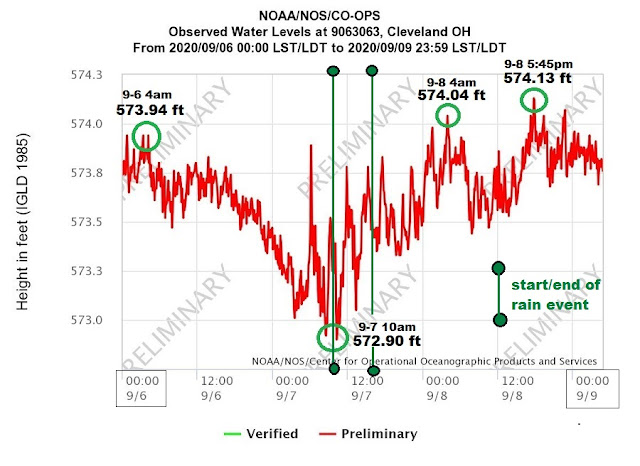 The 1996 levels fell quickly after the tropical rains.  As of this writing, the levels have remained pretty high. I surmise that this is due to the orientation of the 2-4" accumulated rain region which parallels the lake.  Perhaps the runoff into the lake has been more uniform keeping levels higher for longer.

Final doppler rain estimate rainfall totals from the 1996 events were impressive. Even with it's highly pixelated resolution you can see the higher rain amount regions. Pink colors indicated 3" or more. Blue indicates 4"+. A bullseye in southwestern Cuyahoga county of 5-7"! 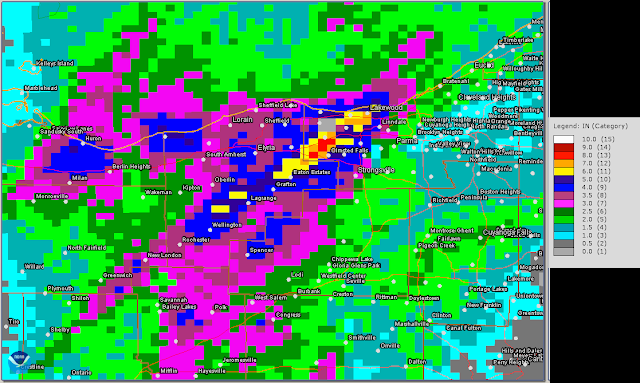 Compare this with Labor Day 2020. The color scheme is different because this map is newer. It shows the orientation of the higher rain totals more west to east. 70% of the area received more than 2 inches of rain.  That equates to more than 3000 square miles! 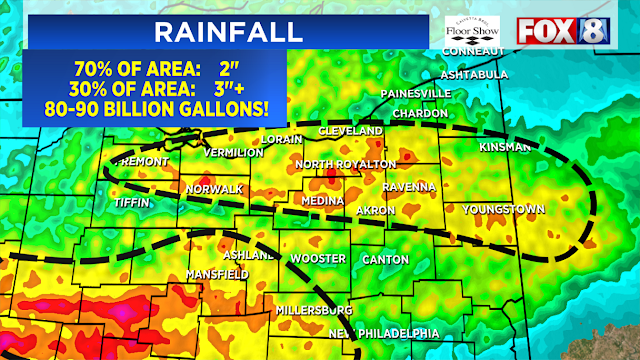 A larger look at the rainfall across the state for both events gives a better look on the spatial coverage.

What about rainfall in the weeks prior to each event? The rainfall departures for the 3 weeks leading up to 1996 event were well below normal. This year, rainfall from mid-August has been above normal for most areas.

Another way to look at comparing 1996 to 2020 is the Arridity Index. This combines the high temperatures departures and rainfall departures into one number. Above zero is considered drier than normal, below zero wetter than normal. Each year saw a significant drop after the heavy rain.  Remember that a few weeks ago, we had another big rain event on August 28th which set the stage for wetter conditions before the Labor Day rain. 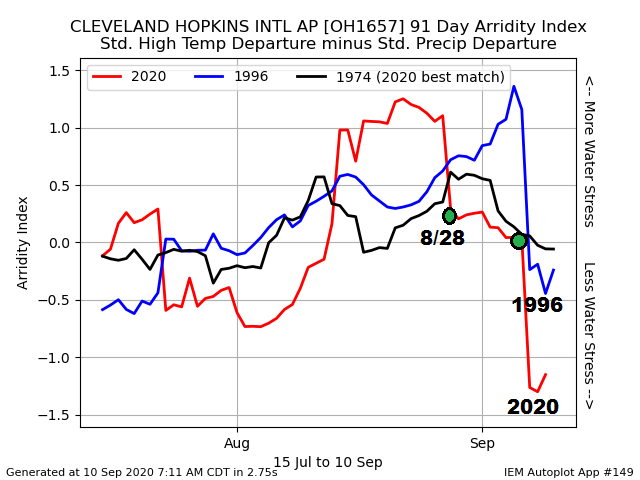 Both events were significantly different in many ways. The 1996 event was due to tropical system and lasted longer.  The 2020 event was from a stalled front which featured bursts of heavier rain over a shorter period of time. Conditions were much drier in 1996 versus 2020. The rain coverage was further south and more localized in 1996. The 2020 rain event was more extensive covering a larger area.

Stalled front between 6am and mid afternoon created training of storms across most of northern Ohio. 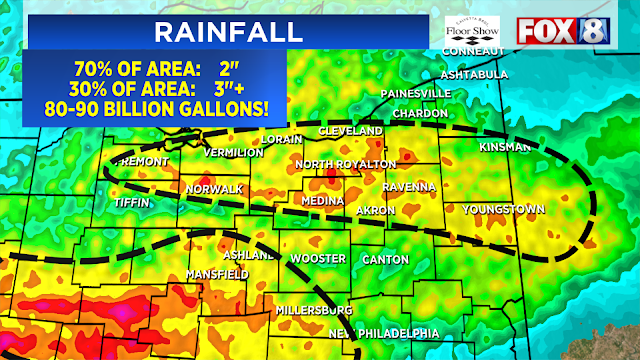 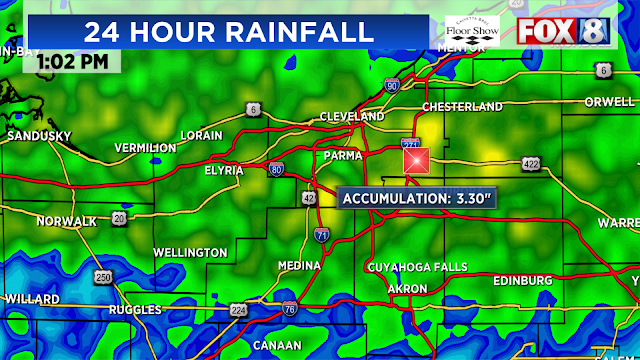 I calculated that more than 80 BILLION of gallons of rain fell over a 12 county area between 6am and 6pm. 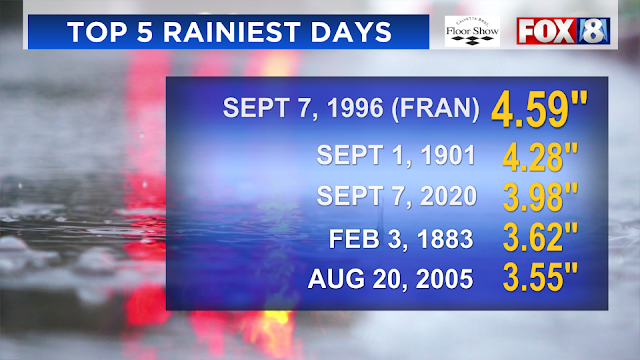 Here is the top 30 rainiest days. I boxed in red the events that occurred in September. 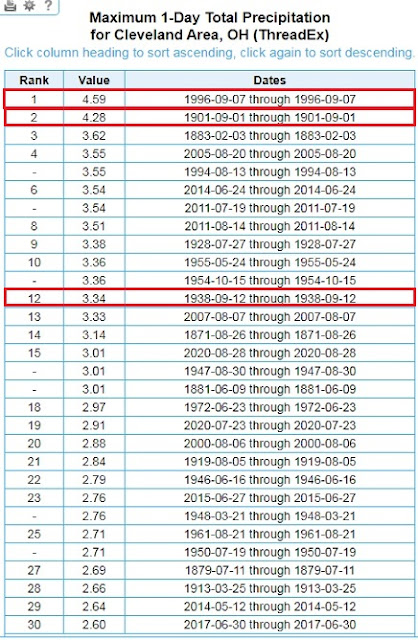 Today's rain is exactly 24 years after the remains of Hurricane Fran passed over eastern Ohio setting our single day rainfall record of 4.59" 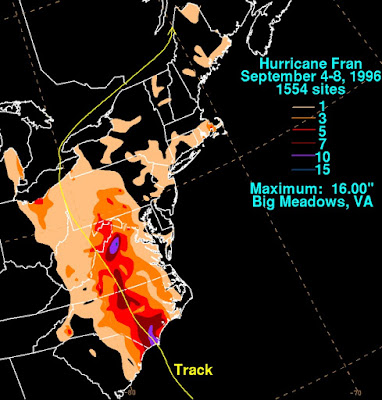 I dug up some of the NWS Cleveland forecast messages from the Iows Mesonet Database (check it out. It's a great resource) issued from that day in 1996: 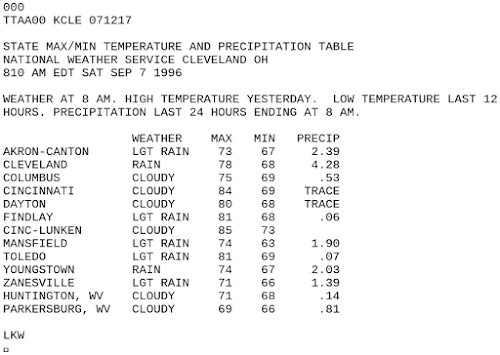 All of this here in Ohio doesn't compare to the dramatic changes parts of Colorado will go through weatherwise over the next 24 hours. Mid 90s to ower 30s with accumulating snow!

Per "Maxar_Weather" on Twitter: "...Years in which Denver recorded both a 100° high and measurable snow. The shortest time in between was 25 days in 1962, with 100°+ on 8/14 and snow measured on 9/8. Denver reached 101° on Saturday and is expected to record measurable snow three days later--Tuesday." 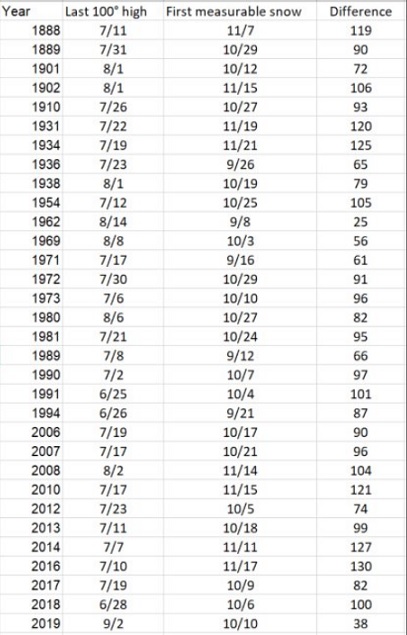