The footage showing the Dallas tornado tossing tractor trailers like toys is fascinating and scary.  Thankfully no one was killed yesterday 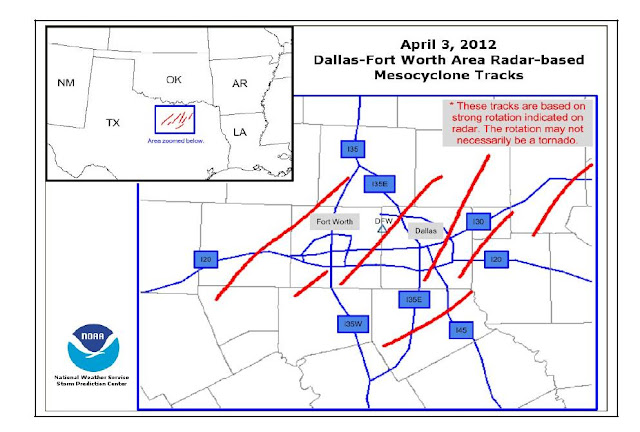 “That’s kind of the climate change we are seeing. You know, extremes are kind of ruling the roost and really what we are seeing, more become the norm.”

Normally, I stay calm and cool when erroneous statements like this make headlines.  Yesterday evening, something inside me went off. So I went on a twitter rant. Social media venting in general rarely results in anything positive.  The pot become stirred.  Words are taken out of context. Objective analysis becomes obscured in a cloud of emotion.  Passion and enthusiasm fade into a mire of negativity.  Once you are there, it becomes very difficult to extricate ones self.  Last night on twitter, I danced on the precipice of the mire. I noticed the err in my way so I stopped dancing and cooled down.  All of this happened in roughly 10 minutes.  Did you follow all of that?

Let's be clear. The statements by the CNN meteorologist needs to be separated into two subjects which need to be addressed individually.

The portion that I am concerned about here is correlating Global Warming to tornadoes.  The Storm Prediction Center has an excellent FAQ section on their website. One of the questions is simply stated:

Does "global warming" cause tornadoes?  Here is the answer word for word from the SPC site:

Does "global warming" cause tornadoes? No. Thunderstorms do. The harder question may be, "Will climate change influence tornado occurrence?" The best answer is: We don't know. According to the National Science and Technology Council's Scientific Assessment on Climate Change, "Trends in other extreme weather events that occur at small spatial scales--such as tornadoes, hail, lightning, and dust storms--cannot be determined at the present time due to insufficient evidence." This is because tornadoes are short-fused weather, on the time scale of seconds and minutes, and a space scale of fractions of a mile across. In contrast, climate trends take many years, decades, or millennia, spanning vast areas of the globe. The numerous unknowns dwell in the vast gap between those time and space scales. Climate models cannot resolve tornadoes or individual thunderstorms. They can indicate broad-scale shifts in three of the four favorable ingredients for severe thunderstorms (moisture, instability and wind shear), but as any severe weather forecaster can attest, having some favorable factors in place doesn't guarantee tornadoes. Our physical understanding indicates mixed signals--some ingredients may increase (instability), while others may decrease (shear), in a warmer world. The other key ingredient (storm-scale lift), and to varying extents moisture, instability and shear, depend mostly on day-to-day patterns, and often, even minute-to-minute local weather. Finally, tornado record keeping itself also has been prone to many errors and uncertainties, doesn't exist for most of the world, and even in the U. S., only covers several decades in detailed form.

As my tweets said last night, I am not against Global Climate Change. As a meteorologist with a focus in physics and mathematics, my stance has been luke warm on blaming any and all "extreme" weather event on global climate change.  Why not mention the connections to the change in southerly jet stream position and strength to severe weather and how La Nina can drive this? How about mention that the changes in temperature with height as primary driver of thunderstorm complexes not just warming at the surface?

If the CNN meteorologist made an argument that global climate change is a driver for upper level wind/temperature changes over time which make conditions much more favorable severe weather/tornado outbreaks,  I'd listen.  Yet the met jumped right into blaming global warming for the tornadoes in Dallas.  How can anyone make the jump from "A" to "Z" without addressing components "B" through "Y"
first?

This all might sound like a game of semantics.  After all, if the conclusion is correct, who cares how we get there. Why bother with what lies in between "A and Z" if we know the endgame as fact?  In this case, the conclusion, or endgame, drawn on CNN--later refuted earlier in this post from the Storm Prediction Center website--is way off course.

How about Metropolitan tornadoes?  These tornadoes occurred in a downtown location.  That rarely happens!

According to the National Weather Service Dallas/Fort Worth office:

An incomplete list of downtown/metro tornadoes from the Storm Prediction Center in the link below:

http://www.spc.noaa.gov/faq/tornado/downtown.html
at 8:16:00 AM Posted by Scott Sabol