How Does This Summer's Rainfall Compare To Recent Years?

It goes without saying that most of Ohio is well above normal rainfall since June 1st this summer (2021) A large portion of northern Ohio has received 10-15" of rain since June 1 with some areas close to 20 inches! Actual rainfall numbers are highest in eastern Huron, southern Lorain and most of Medina Counties. 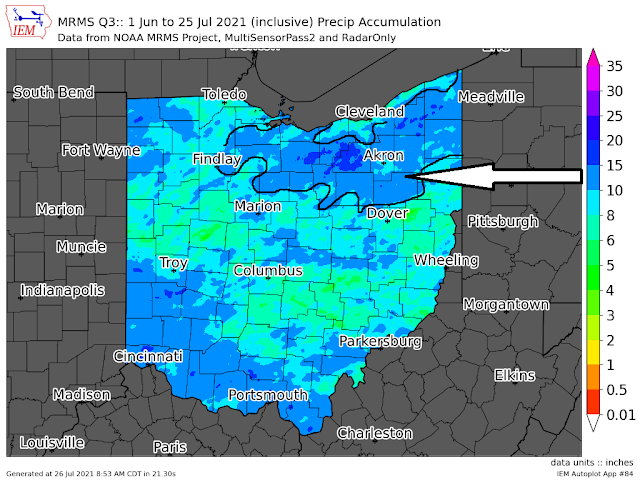 Images below show rainfall vs normal. (Note the legend numbers are different for each image. Zero contour is the same for each) 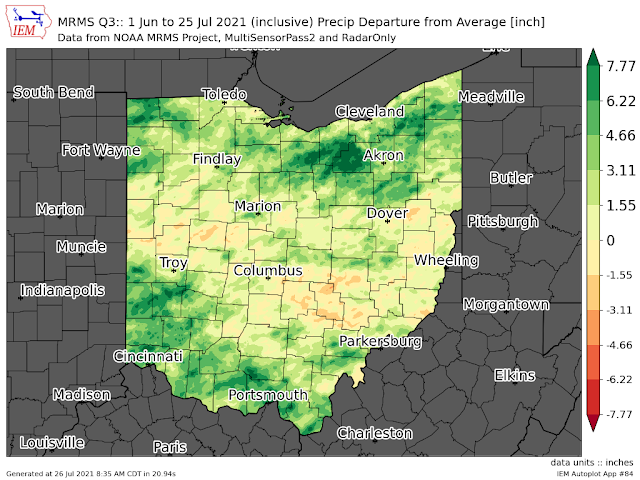 How about last summer 2020?  Most of northern Ohio was well below normal--with the exception of portions of Portage, Geauga, Trumbull and Ashtabula counties. 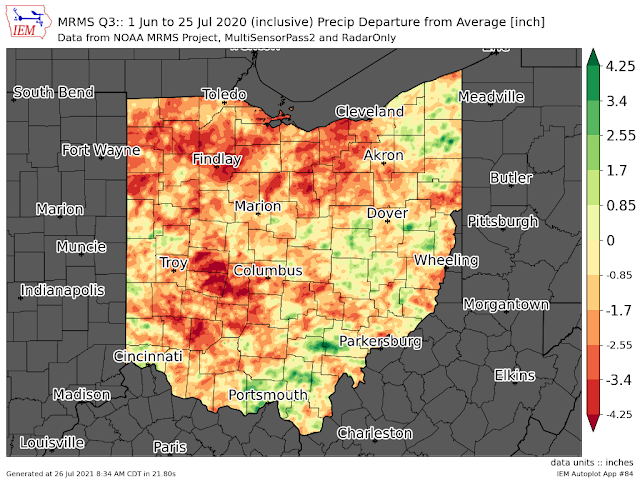 Summer of 2019 rainfall departures are comparable to this summer overall. 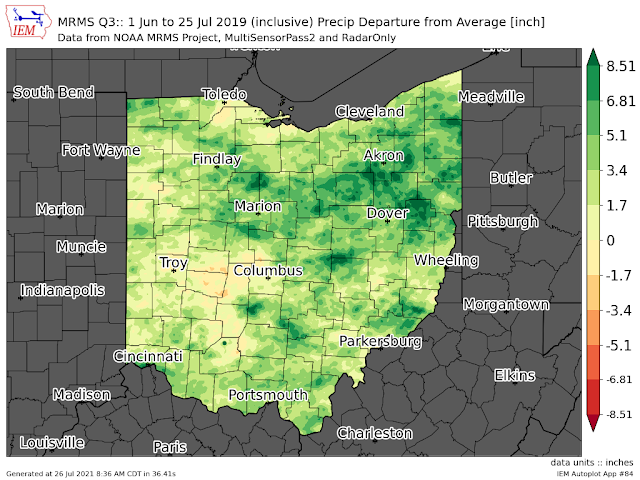 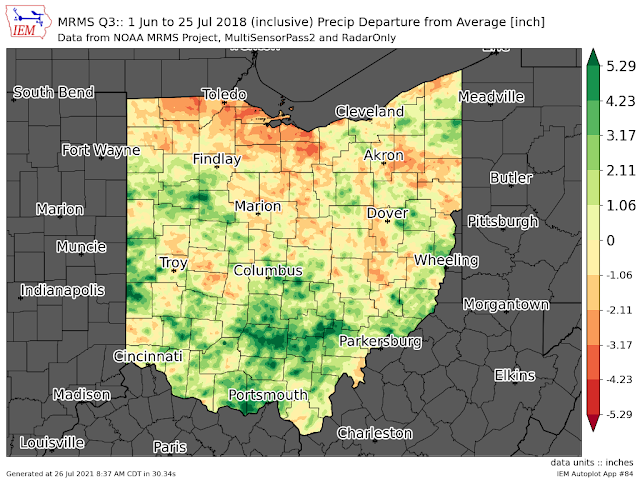 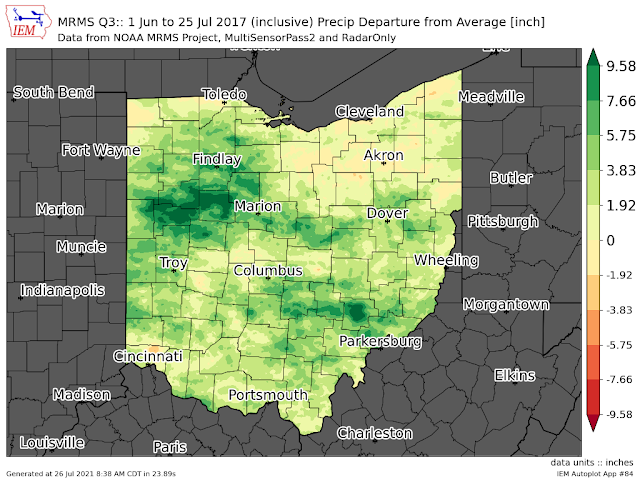 It's hard to believe but there are spots in northern Ohio that are near/slightly below normal with rainfall since June 1st.  When you look at the rainfall vs normal OVERALL across northern Ohio this summer the dark blue areas (2-6" above normal) stand out. 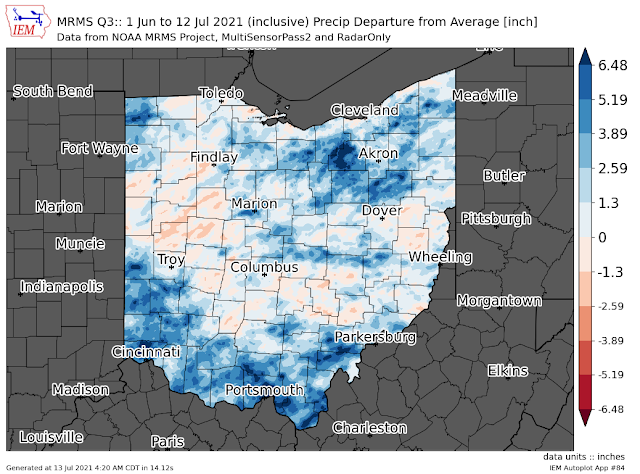 But when you zoom in closer, the "drier" areas become more visible. The counties below which have significant areas of below normal rainfall since June 1 (tan colors--see legend to the right) are CUYAHOGA, LAKE, ASHTABULA, ERIE, HOLMES & TUSCARAWAS.  I want to reiterate that this doesn't mean these areas are dry and without rainfall. It means that the amount of rain is below normal not zero.

Has This Summer Rainfall Been Unprecedented Across Ohio?

On July 5th we took at look at the summer pattern thus far. Check it out if you haven't already.

Here are the updated rainfall totals VS normal broken down in three periods: 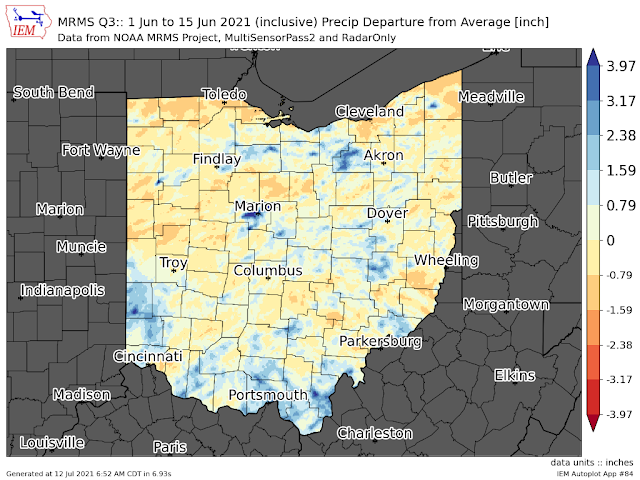 Second period is from June 16 to June 30.  Heaviest rainfall was from Medina county west to just south of Findlay. 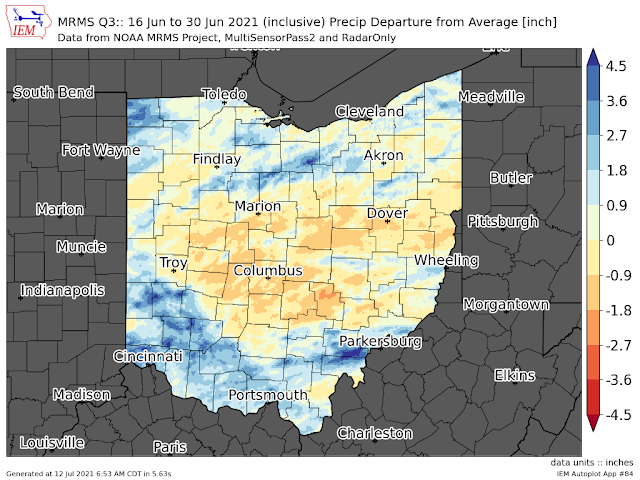 Now the final period is from July 1 to July 11.  Heaviest rain across the southern half of northern Ohio. 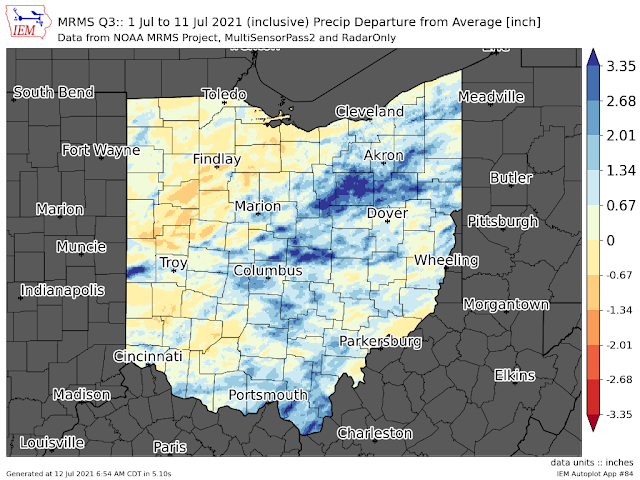 Finally the summer totals overall from June 1 to July 11. 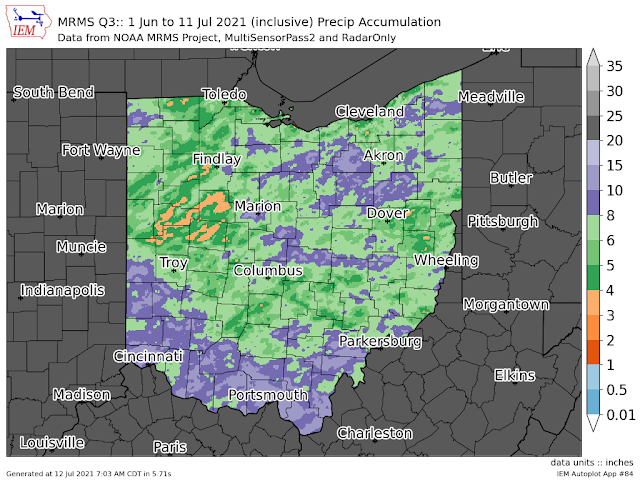 Soil moisture has increased significantly over the last week

Our summer outlook issued in late April highlighted frequent rain/storms this summer with above normal rainfall.

Pattern looks to continue through the end of July!

What Summer Was The Most Humid? 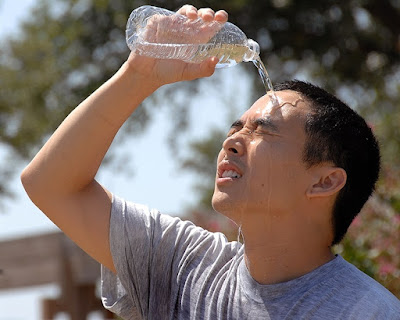 First a brief tutorial on why we use dew point versus relative humidity: 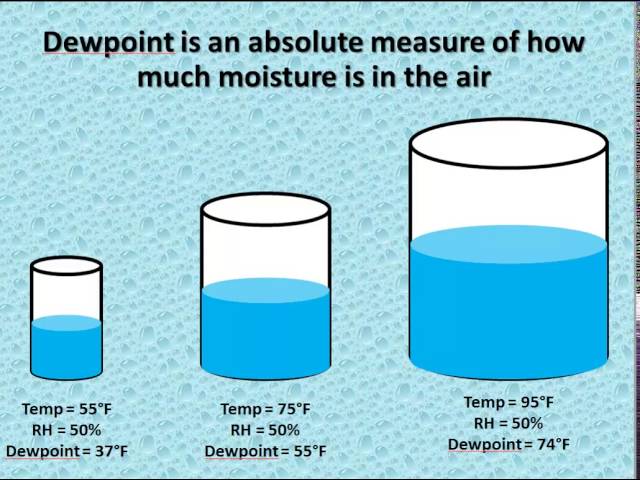 So far through July 7 we've had about half of the total number of 70 degree dewpoint hours compared to last summer.

I did some research on the years with the highest heat indices measured in hours in northern Ohio. You can read about it HERE (written in 2019)

There is an upward trend for more humid summers over the last few decades in northern Ohio. 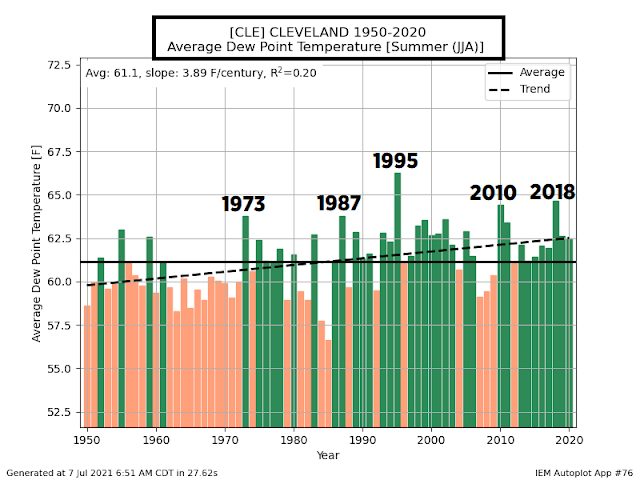 Summer Weather Pattern Thus Far. Will It Continue Into July?

The pattern across the US has featured THREE dominant features. Ridge of high pressure western areas, persistent trough/low pressure in the central US and the Bermuda High starting to inch west along the east coast. It took us more than 300 days in northern Ohio to reach 90 degrees. The longest stretch without a 90 in over 10 years!

Temperatures since mid May have fluctuated across the central/eastern US. Storm systems have been frequent.  Below shows upper level pressure pattern on the left.  Temperatures on the right.  You can see how the domes of COOL and WARM air developed over time.  Each image is a 6 day period from mid May through mid June.

Evolution of storm systems was mainly in the central US since early June. Below are the pressure anomalies since mid June across the corn belt. BLUE areas are consistent low pressure areas.

Widespread rainfall across the Ohio Valley over the last month. Below normal indicated with tan colors. 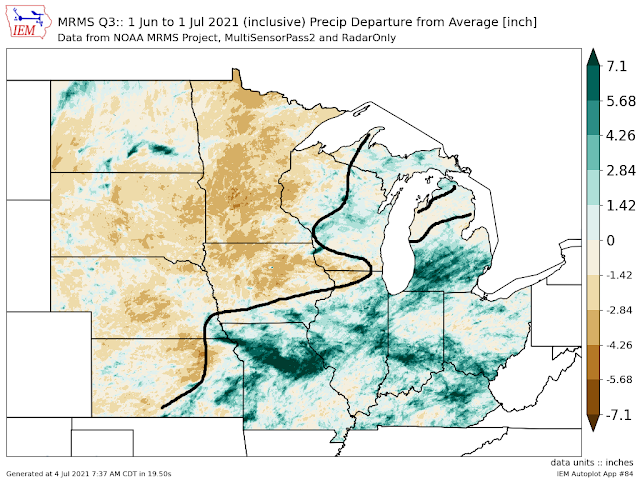 Hard to believe but a large portion of Ohio NEEDS RAIN when looking at the rainfall numbers since June 15th. 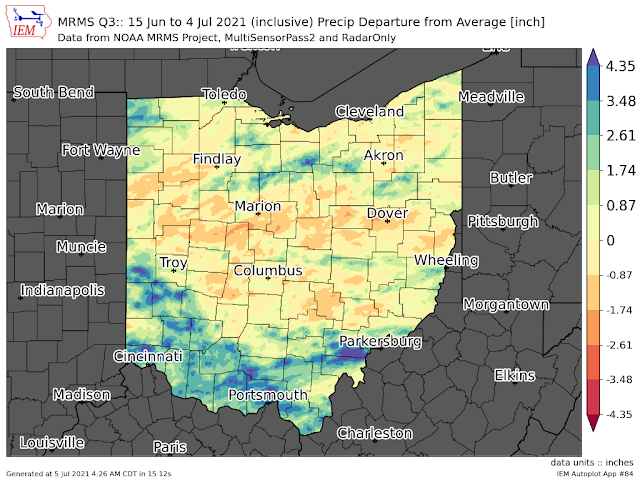 How about rainfall vs normal since June 1st?
Green areas are above normal
Warmer colors are below normal 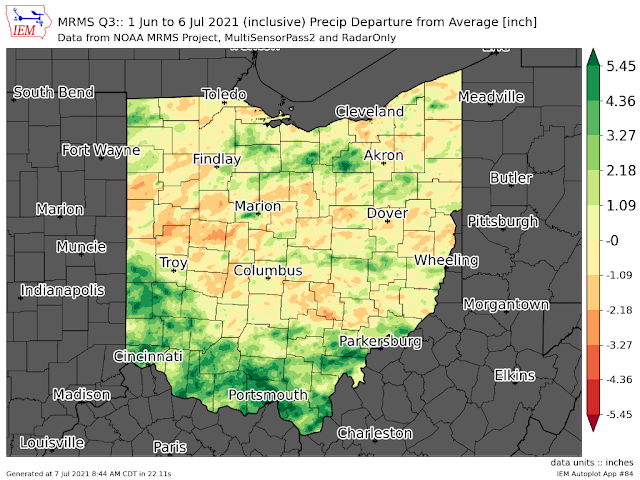 Yet the daily rainfall occurrence is more frequent. 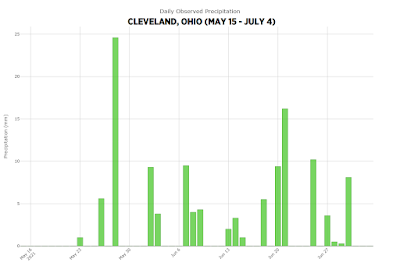 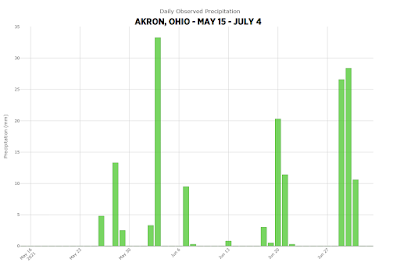 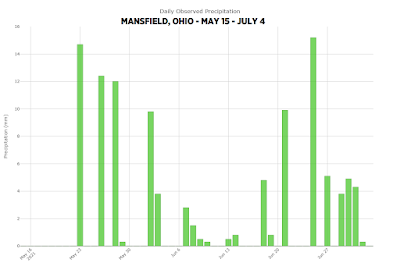 Temperatures are running above normal since June 1st. 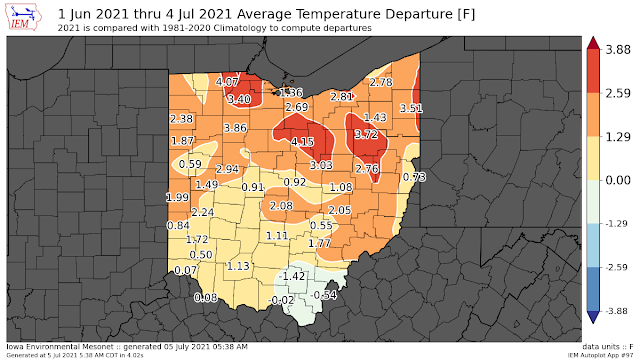 Interesting to note that the EPO (East Pacific Oscillation) has turned negative since mid June. This has partial supported the Pacific Northwest ridge of heat (along with other factors) which in turn has kept the central US trough locked in. 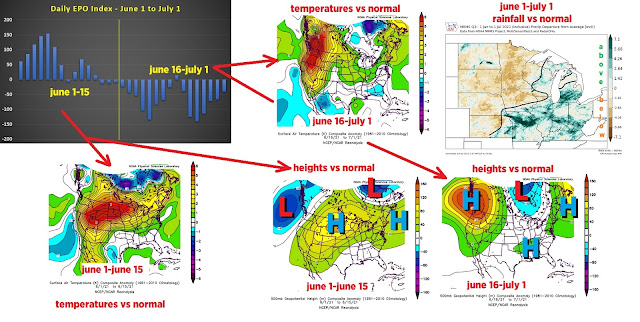 Long range outlook shows the same general pattern through mid July: Central US trough with semi-frequent frontal passages through the first three weeks of July.  The Bermuda high is stronger which should support more heat in new England, mid Atlantic and portions of the Ohio Valley. More heat out west. 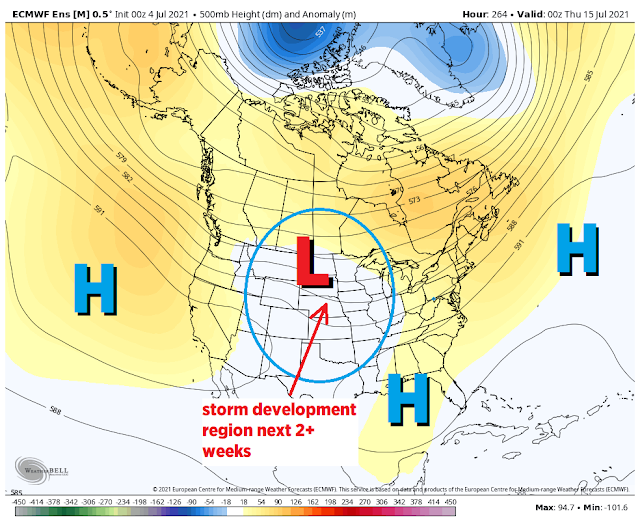 OVERALL rainfall will be above normal across Ohio and a large portion of the Midwest. 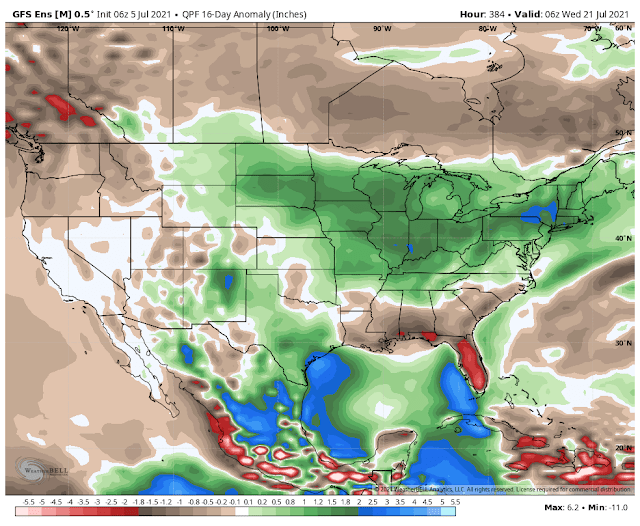 What's Special About the 2024 Solar Eclipse?

The weather cooperated this morning for a brief period of time. The clouds thinned out enough for us to see the partial solar eclipse along the horizon in northern Ohio. Pictures courtesy:  Doug Kishman, Mari-Dor Beach, Vermilion, Ohio at approximately 6:10am. 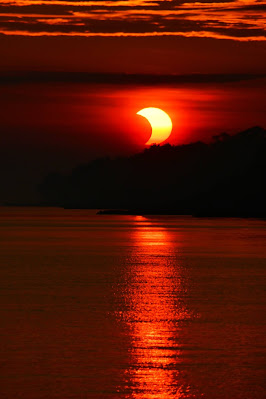 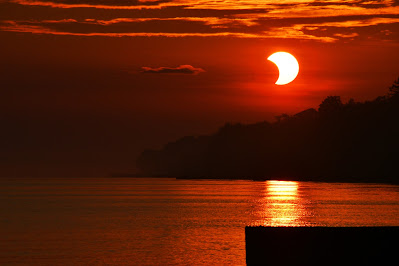 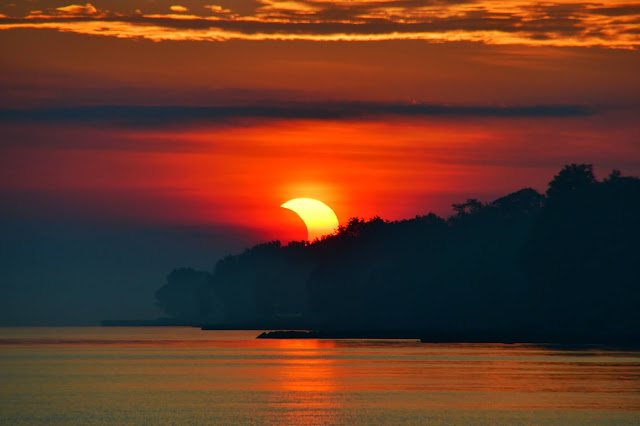 Solar Eclipses just as common as lunar eclipses.  The difference is that the path of visibility is much smaller during a solar eclipse than a lunar eclipse. Calculations indicate that anyone location on the Earth's surface will have a total solar eclipse once every 375 years. Space.com has an excellent write-up.

There are different types of solar eclipses:  Partial, annular and total.

The next Total Solar Eclipse that will pass directly over Ohio will be April 8, 2024.

The next set of solar eclipses will pass within several hundred miles. If you miss the Total Solar Eclipse in 2024, you will have to wait until the end of the century--September 14, 2099--for the next TSE to pass directly over Ohio. 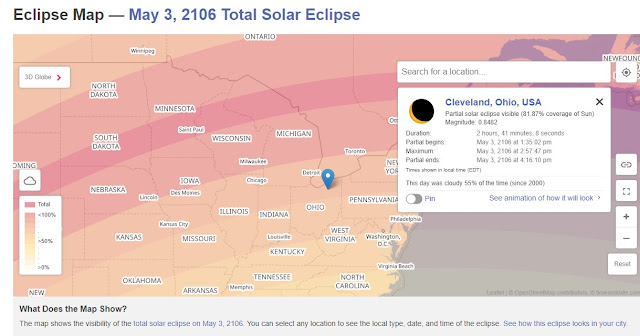 Here are ALL Solar eclipses world wide per decade and their paths. These graphics may be incomplete. Check the NASA site for any I might have missed.