Current US Snow Cover vs Last Winter & Others

Email ThisBlogThis!Share to TwitterShare to FacebookShare to Pinterest
Quick look at the progression of US snow cover shows many ups and downs. The first graph shows the snow cover during two cold winters nationally starting December 15 through mid May. Interestingly, the peaks and valleys in these two winters (2013-14 and 2010-11) match up with the exception of mid January. 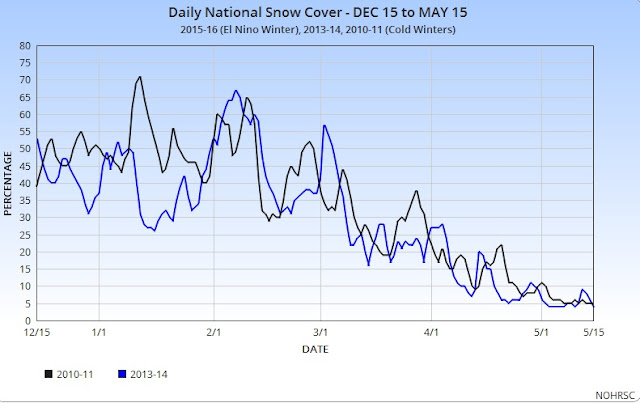 The numbered peaks correspond to large scale cold periods. See the US temperature anomalies below for each peak. 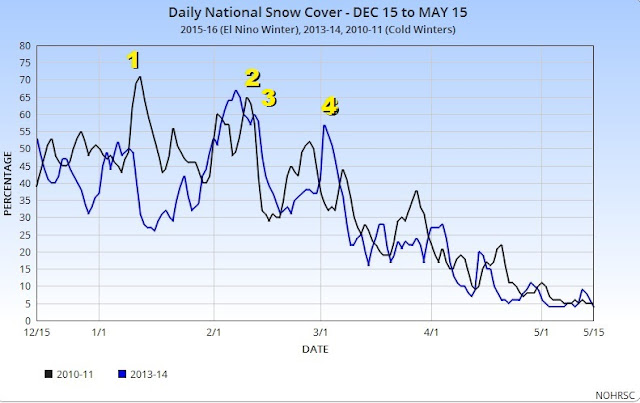 The graph below shows snow cover over the same period with the two cold winters above along with the El Nino winter 2015-16 added in red. A spike in late December and two smaller ones in January preceded a steady decline from late January through the end of the winter.

The yellow line shows this winter's snow cover through December 27th now at 41%. 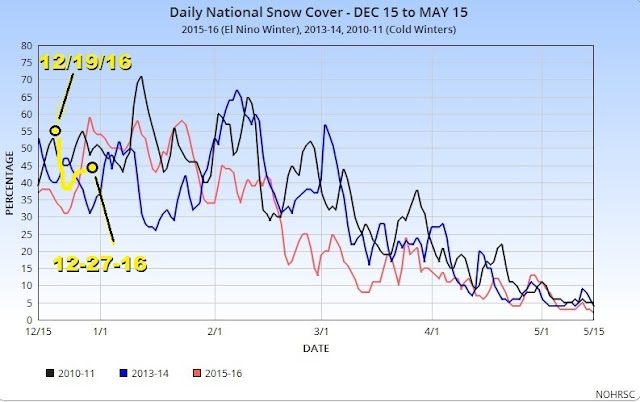 Expect this number to steadily climb through the first two weeks of January 2017 north of 65% given the colder long range outlook below. 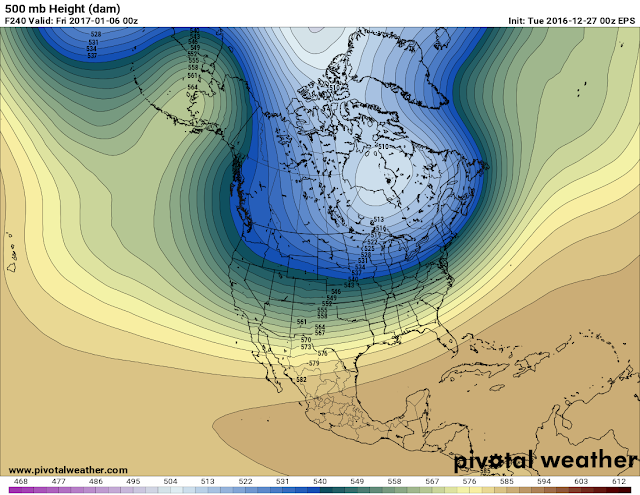 Email ThisBlogThis!Share to TwitterShare to FacebookShare to Pinterest
Its Christmas Eve. The Browns finally won. The collective sense of relief felt across Browns Nation is palpable. Yes, the beard will soon be history. The finality of it all has filled me with a sense of closure. The Browns win-less streak is behind them. My beard will soon be a casualty of the razor. Yet I can't help but be a little nostalgic. I've grown beard for a variety of reasons over the years. What's the real reason why I grew this beard?  Here's is my beard retrospective.

It all started back in 2011.  I was trying to find some excuse not to shave each day before heading to work at WJW FOX 8.  There is an unwritten rule put forth years and years ago that television personalities need to stay cleanly shaven.  There are some exceptions to the rule in the television world. But in general, facial hair--even today with beards in style--is a no-no. Anyway, I approached my boss with a weird idea.  What if I grow my beard until the temperature reaches 60 degrees.  After all we were in the midst of one of the coldest winters in decades. It would be a slap-in-the-face to old man winter. Everyone was sick of the cold and snow. We could promote it on our morning show.  I could make fun of the beard.  Most of all, I wouldn't need to shave for an extended period of time.  I was hoping for 3-5 weeks tops.  In the end, the whole "no shaving until 60 degrees" beard lasted around 30 days.  I shaved it off in stages. My kids had a great time coloring it.

The following year, I grew my beard for Mow-vember. In the end I raised $2000 for cancer research.  It was for a great cause. It was for the kids.  Once again, I didn't have to shave for 30 days.

In late 2013 shortly after Christmas,  the itch (no pun intended) to grow a beard surfaced again.  This time, I would soften the request with my boss (who was more than likely onto my yearly beard growing stunts) by stipulating that I would only grow my beard until we reached 50 degrees.  The request was granted. I was ecstatic. I would start New Years Eve. No more shaving for another unknown period of time!  Unfortunately we were also in the midst of yet another brutally cold winter.  Snow cover blanketed northern Ohio. Many nights fell well below zero. We didn't see the grass until mid March.  People were getting stir-crazy.  My beard continued to grow....through January and February into early March.  The whole beard growing thing became an exercise in self deprecation. We all made fun of it.  It became synonymous with the cold.  We finally reached 50 and I shaved it on PI day, March 14th in stages. My beard grew for 74 days. 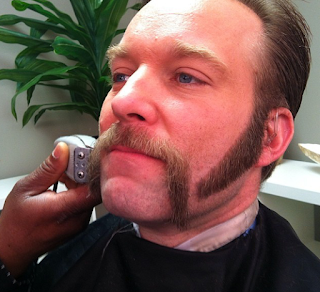 Fast forward to late August of 2016.  After one of my son's football games, he mentioned that it's been a while since I grew a beard...almost three years. Both of my kids have fond memories coloring my beard with sidewalk chalk when they were really little.  Around this time RG3 went down with a serious injury after game one of the Cleveland Browns season and I needed another excuse to grow a beard. After Labor Day I approached my news director and asked him if I could grow my beard again until the Browns win their first game.  He looked at me a bit funny and said  "Are you sure you want to do this?"   I answered without hesitation, "Absolutely!" He agreed and added the stipulation that in the event the Browns go 0 and 16, you shave it at the end of the season.  Statistically, the chances of this happening were so remote that I never thought of it as a viable possibility.  I agreed and boom...I was off!  My thinking in early September was that even with the "Browns quarterback by committee merry-go-round" we would surely a win in the first few weeks.  At the worst, the Browns record would be 1-4 or 1-5 with a win before New England in week 5.  There was no way I could break my beard growing record set back in early 2014 of 74 days.

I was getting a bit worried. I might have this beard around Halloween....or Thanksgiving. That would be day 77 if you're keeping score. My boss kept saying, "Aren't you glad we added the 0 and 16 thing early on?" 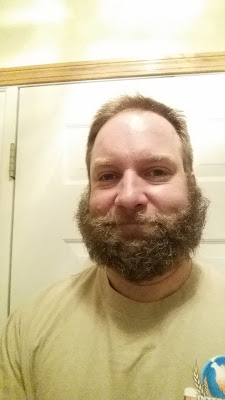 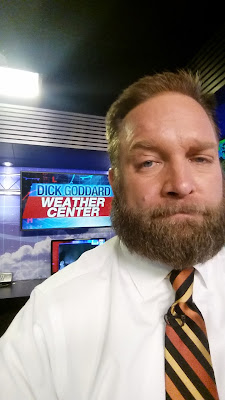 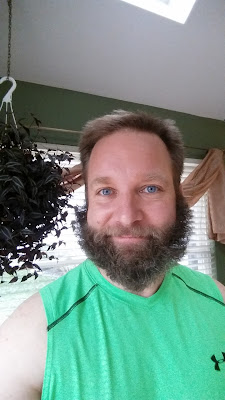 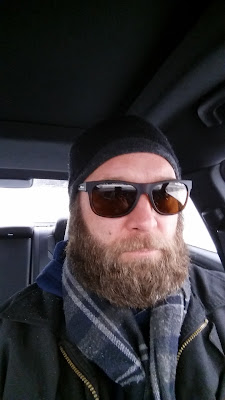 So here we are.  It's the holidays. It's December and I'm well past day 80, day 90 and now day 100. We've hung Christmas ornaments on the beard on the morning show.

The beard has received its own mail (with beard oil and beard butter). 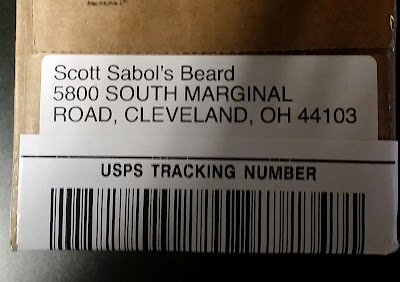 The Browns were now 0 and 14.  The attention has been a bit overwhelming.  Never did I think that my beard would last this long. Remember, this was all an excuse not to shave for a few weeks at best.

Finally on Christmas Eve, the Browns earned their first win of the season against San Diego. My phone blew up as literally hundreds of people took time out of their busy Christmas Eve activities to send me messages filled with joy.  Most were glad the Browns won. Many were also glad the beard was finally toast. I couldn't believe it.

Most people understood the intention was not a serious one even as the "0-for" beard evolved. I've always been a Browns fan since I was a kid. I remember the glory days of the 1980s.  I remember the day the Browns left in 1995. I remember walking into old Cleveland Stadium to buy a seat in 1996. My basement is decorated in Cleveland sports memorabilia spanning 30 plus years.  This season was as tough for me as it was for all of Cleveland. I can't imagine how tough this has been on the Browns organization.

So I want to thank everyone who has followed this since September 8th.  Its December 25th. I just finished applying some Beard Oil to my 106 day old growth knowing that the end of the beard is at hand. My family is rejoicing. It's truly been an exciting ride.

Tomorrow, December 26, during the morning show on WJW FOX 8 we will shave it off in stages.  I'm sure I'll need many band-aids.

Email ThisBlogThis!Share to TwitterShare to FacebookShare to Pinterest
The conditions over the higher latitudes at 10mB (65-70,000 feet) are much warmer recently than last November/December...

...which translates to higher heights aloft at 10 mB. 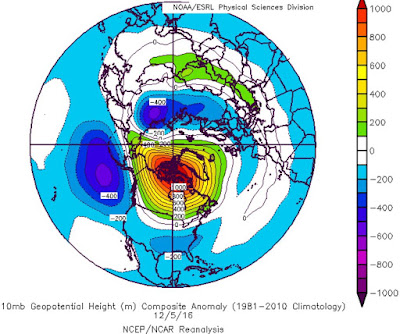 Pressure pattern completely the opposite of the polar conditions in early December last year where heights were much lower. Polar vortex was very stable probably influenced by the El Nino. 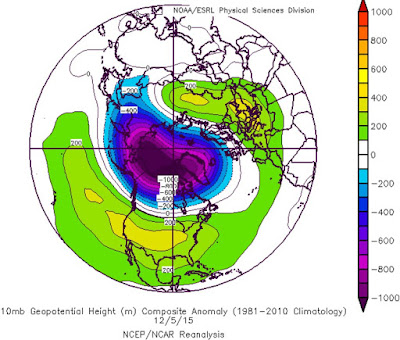 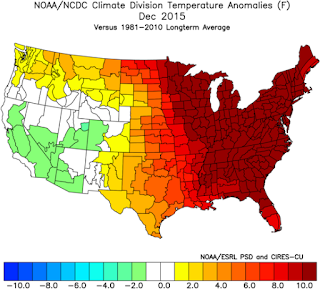 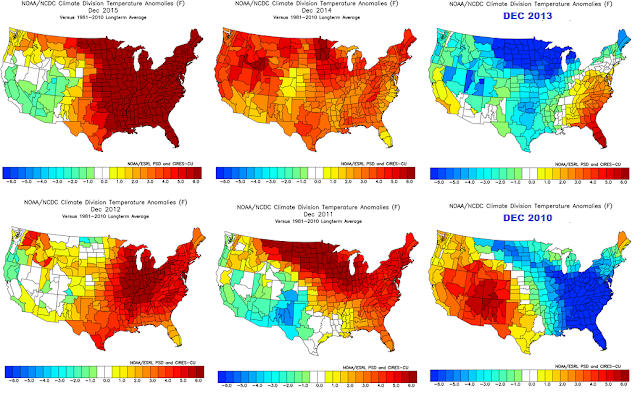 So far, temperatures in early December through the 5th were above average.

Based on the high latitude conditions at 10 mb (65 and 70,000 feet) mentioned above and the higher than normal Eurasian snow cover which has driven skyrocketing high pressure across Russia, this first shot of colder air across North America was not a surprise.


In fact, we mentioned this in our winter weather outlook issued back on October 27th and in subsequent tweets on November 22nd and Dec 2nd emphasizing a significant lake effect snow event a week in advance: 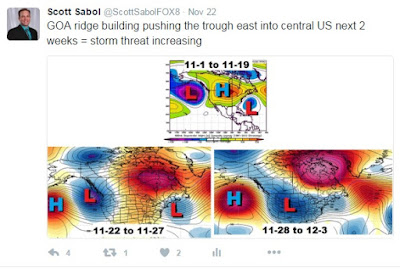 The CPC painted its first below normal temperature outlook across ALL of North America for the first time since December 2013. Hat tip: Brian Brettschneider 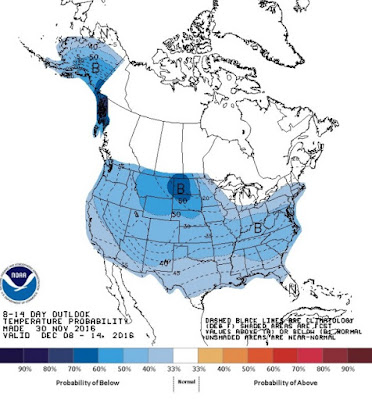 We haven't had a December with temperatures at least one degree below normal in Cleveland since 2010.

A few days ago (December 6) I retweeted a post from late November highlighting the shifting jet stream position across the middle of the US allowing more frequent storm systems. 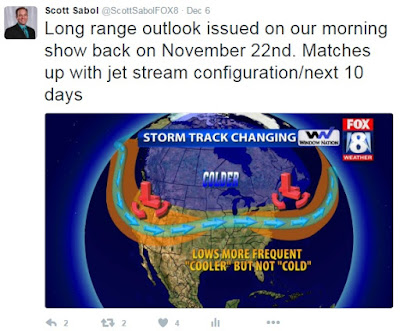 Our 8day forecast issued on December 7th and 8th shows these individual systems with high snow potential for northern Ohio through December 16th and beyond. 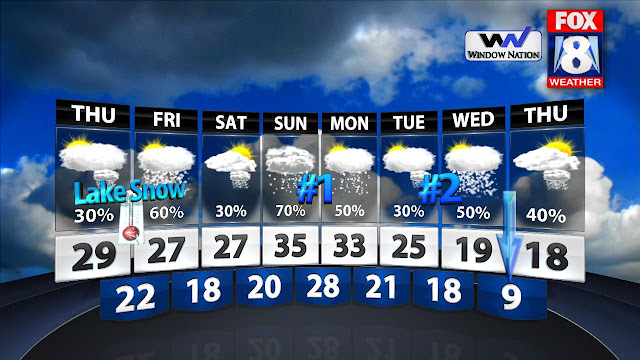 Anticipate below normal temperatures, overall, the rest of December 2016. 80% Chance for a white Christmas for northern Ohio!

Historically Does US Warmth In Fall Connect to Higher Eurasian Snow Cover?

Email ThisBlogThis!Share to TwitterShare to FacebookShare to Pinterest
The snow cover across northern Asia is now 3rd highest since record keeping began in the mid 1960s for early November.

The northern Pacific jet has been very strong and stable with little "waviness" until the last few days. The low over the Aleutian Islands is locked in place as the strong northern Pacific jet undercuts the low pumping up the ridge across North America locking in abnormally warm temperatures.

Is the high snow cover across Asia influencing the strong jet stream?  Is there a history of this in early November in very high/very low Eurasian snow cover years?

While this year's cool pool in the northern Pacific has expanded recently, three of the top four years had significantly larger and colder cool pools (reanalysis is in Kelvin). Interestingly, widespread US warmth from mid October to mid November only occurred in 2016, 2015, 2014, 2012 and 2009.

Comparing high and low Eurasian snow cover to the ENSO state shows a blend to either side--cool and warm. 8 of the 20 years occurred during a strong ENSO state. Overall, there doesn't seem to be an overall trend which suggests that other factors are at play aside from ENSO.