The speed of Time

The speed of Time

It’s true. As you get older, the rate at which time progresses increases exponentially. It happens in stages and I've narrowed it down to three.

The first is college. Those 4 or 5 years leading up to your diploma seem to be a distant memory by graduation day and suddenly the real world begins.

(While it might be said that your high school years should be mentioned first, I'm of the belief that in the grand scheme of things, high school can be grouped into the "child years" phase where for the most part you have no worries. You play video games, you go to school then you get a job when you turn 16 then you play videogames some more.)

The second stage is marriage. Maybe you date your girlfriend for 3 or 4 years. You travel, go on hikes or just hang out and pass the time watching movies. But once you say your "I dos", forget about Saturday afternoons feeling like an eternity. Before you know it, 2 years have passed and kids begins to enter the mental picture and you both wonder what in the hell happened.

The third stage is child birth. Get ready because this stage is instantaneous. Once that child enters the world, the earth, for reasons unknown, begins to rotate much faster decreasing the length of day. No longer is a day 24 hours, its more like 15. Time on your watch begins to skip. You look down and its reads 12PM. You look down again and it reads 3PM! In essence, the laws of physics change for you and your wife. A temporal rift of some sort envelopes your world and its gets more pronounced every second!

For me, the whirlwind treadmill ride that is 2005 is complete. I just stand back and think about that for a bit and it hits me. I am deep into the longest stage of them all: Stage Three! Its odd looking back over the year realizing that for almost half of the year, I had my own child living and breathing in my house! Let me tell you, it’s more than a tad overwhelming. It’s downright frightening!

What about this thing called time? It’s a concept that many of us don't really understand. Yes, we see a clock on the wall and it moves each day but how do we know what an hour is or what a second is? According to the International Bureau of Weights and Measures, the second is the duration of 9 192 631 770 periods of the radiation corresponding to the transition between the two hyperfine levels of the ground states of the caesium-133 atom at rest and at a temperature of zero Kelvin. I have no idea what that all means but its sounds good to me. 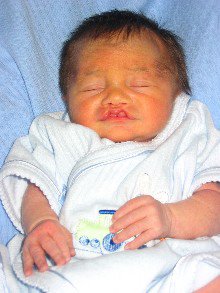 All of this coming from a professor who had severe posture problems, sounded like Jack Nicholson, wore ties from the late 40s and always ate mustard covered pieces of meat for lunch surrounded by books that were grossly outdated. Needless to say, I thought that he was a bit senile. 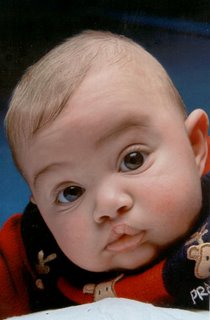 Stage Three is by its very nature a paradox. It’s the most grueling but at the same time, it’s the most fulfilling. Now that I have a 6 month old son--who is always happy, loves to play and perhaps a bit rotund--I can appreciate Stage Three more fully. Sure it’s still frightening but that’s all apart of the magic that is parenthood. Yep, my professor's postulate though somewhat antiseptic couldn't be more right.

Here is to a happy and prosperous 2006. Don't forget the leap second
at 7:34:00 PM Posted by Scott Sabol No comments:

The sun sets on an era 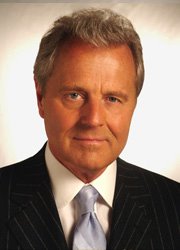 An era of Cleveland television has come to and end. Tim Taylor, 6 and 10PM news anchor at WJW FOX 8 for 28 years retired on December 23rd. You can feel an emptiness in the newsroom in the wake of his departure. It sounds melodramatic but its true. Maybe its because I remember watching Taylor growing up in Cleveland and for the last several years, I had the distinct honor of working with him. I vividly remember as a young child hearing his voice from the family room TV during the evening news as we cleaned up the kitchen after dinner. He was the symbol of credibility in this environment of "entertainment news" the likes that will never be duplicated. The newsroom will be different without him.

Quick story. I remember last summer while going through some old weather records from Dick Goddard's archive when I came across a notation that Goddard made from 1991. The exact date excapes me. At any rate, the notation wasn't about some freak meteorlogical event as one might think. The note simply read in red ink:

FLY GOES IN TIM'S HAIR AND DOESN'T COME OUT

Now that's good stuff from yester-year! But I digress...

The nature of television news has changed dramatically over the last decade and continues to change. Unfortunately, the era of "REAL JOURNALISM" most would agree is drawing to a close as "ENTERTAINMENT NEWS" replaces it. As the Tim Taylors and Tom Browkaws of the world retire, the era of "REAL and CREDIBLE JOURNALISM" seems to be retiring with them. I just hope that I'm wrong.
at 3:13:00 PM Posted by Scott Sabol No comments:

The time that I have to watch TV is very scarce and precious since, being a parent, you’re occupied with more important things such as the development of your child.

The times when I can take a break and brainlessly flip through the endless channels are relaxing to say the least. However, last week I ran across a show that I despised when it was on network TV and seeing it again in reruns reaffirmed that notion.

This show is Full House. Can someone please explain to me how the show Full House stayed on the air for 9 seasons? One would argue that it has the "wholesome family" motif where regardless of what befalls them, all is fine and dandy at the end of the half hour. Fine. Point well-taken. I'll even admit that happy endings give me a good feeling most of the time. However, 192 of them are just too many "everything-is-back-to-being-perfect" scenarios for my taste.

So the next time you’re flipping through the channels and you come across an old episode of Full House, do yourself a favor and blow right by it. Even if you feel yourself being drawn in while asking yourself the question, "I forgot how young the Olsen Twins actually were in this show", its best for the good of all that you continue to channel-surf and maybe land on something more innocuous such as the Food Network or a rerun of the Jeffersons.

Then again, John Stamos' hair, however, does stand the test of time. That in itself might be worth the price of admission.

So much for the Global Warming pundits' talk of polar icecaps melting, my backyard is officially a glacier and it’s getting thicker!

The first 18 days of December in have been the 2nd coldest EVER! We're talking temperature records that have been on the record books since 1871 which, by the way was during a mini-cold period in climate history but I digress.

Why is it so cold so early? Here's a little climate background and some meteorology to hopefully explain this somewhat freak early winter:

The atmosphere circulates around the planet in a wave-like fashion. One of the components of these waves is called Rossby Waves. Rossby Waves are waves formed due to Coriolis Force as air circulates around the planet at different latitudes. Changes in--yes, a scary weather term: Vorticity--(one of the most fundamental driving forces in planetary atmospheric motion which causes the overall weather patterns) change the dynamics of the wave. (If you’re wondering--and I know most of you are--what the equations that are used to describe the changes in vorticity and ultimately weather patterns, check this out.

Maybe all of you will think twice before mocking the local television weather guy or gal. We had to study and memorize this stuff! (Thank you Dr. Pasken)

Anyway, these Rossby Waves are not uniform so they tend to fluctuate in intensity as they circle the northern hemisphere because of changes in vorticity. Often times, a Rossby Wave will develop an upper level low over Hudson Bay in Canada while a strong high pressure cell becomes entrenched over the North Atlantic.

This upper level high (at an altitude of 18,000 feet) often migrates a little to the west or to the east throughout the year. 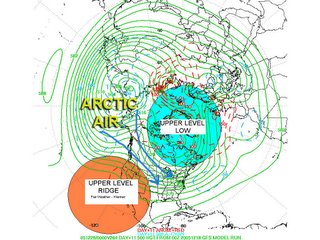 If the NAO is positive, the weather across the eastern US and tend to be warmer than normal with below normal wide-scale precipitation. If its negative, than the floodgates open from the north and the eastern US gets blasted with arctic air, lake effect snow and a better chance of nor-easters forming shifting the ridge to the west.


Right now, as of this writing (December 18, 2005), we are in a negative phase of the NAO. This would explain why the average high temperature for the first 18 days of December has been 25 degrees whereas last year it was 42! 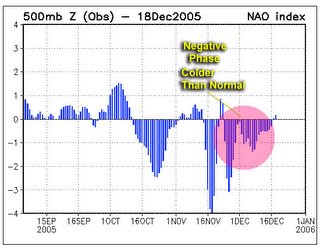 Incidentally, The NAO also exhibits significant variability over multiple decades. For example, the negative phase of the NAO dominated the circulation from the mid-1950's through the 1978/79 winter. Those of you who remember those winters back in the late 70s, the NAO was the reason for it.

The near record cold notwithstanding, ski resorts are reporting some of the best business this early in the year in quite a long time.

The million dollar question still remains: What is the rest of the winter going to bring? It seems as if the NAO is starting to change toward the positive which would suggest that January will bring less cold air outbreaks. At this point, I welcome a weeks worth of 40+ degree weather. But in this age of supercomputers with weather models containing partial differential equations that would make the most sure-footed mathematics major cringe; there is still no guarantee in weather forecasts. Stay tuned. 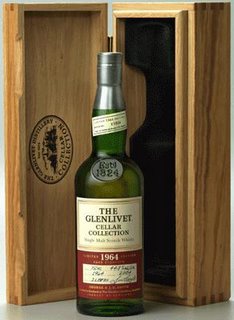 I must confess that over the last 6 months, the blog EVENING WITH SABS morphed from one concept to another. Should it be serious views on the world around us? Should it delve into current events or feature discussions on some topic that is "all the rage" like--say, the XBOX 360 or Global Warming or the question of whether the show "Joey" will be back for a third season? After careful deliberation, I've decided to make "EVENING WITH SABS" a blog of random thoughts and insightful observations of the world around me that might not be necessarily mainstream or "hip". Altough the original incarnations of "Evening with SABS" would surely have promised to be insightful in its own way, I believe that this current format will prove to be more useful and more enjoyable to the casual reader and frankly, more fun for me. 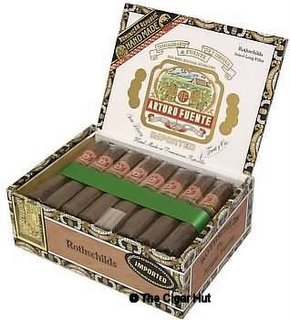 So, relax, sit back, enjoy an adult beverage and a cigar (my personal favorite is the Arturo Fuente Rothschild) and get ready for hours of family fun spanning a multitude of genres along with some science sprinkled throughout.


Keyword: INTRODUCTION
at 9:27:00 PM Posted by Scott Sabol No comments: