Email ThisBlogThis!Share to TwitterShare to FacebookShare to Pinterest
Michael Frates, grad-student at the University of Akron mapped out all F3, F4 and F5 tornadoes (the strongest tornadoes) from 1950 through 2006 which stayed on the ground for at least 20 miles. What he came up with is several regions or "alleys" where the strongest tornadoes occurred. First two images courtesy:  Michael Frates 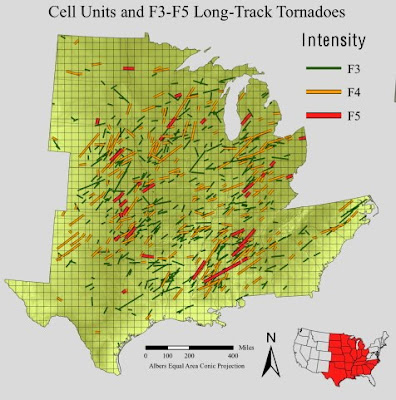 The traditional "tornado alley" through Oklahoma and Kansas still remains and is very accurate.

However, two additional zones of higher frequency of F3-F5 tornadoes he found to exist in the south (Mississippi, Arkansas, Alabama), and also in Indiana, central Kentucky and western Ohio. 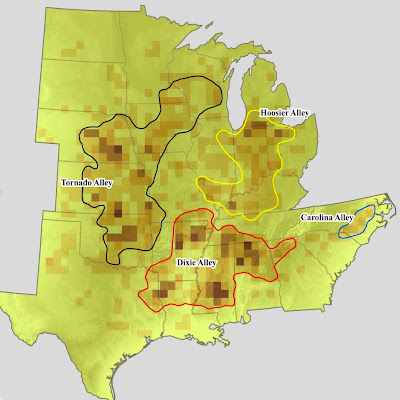 This also corresponds to the average number of overall tornadoes here.

As we focus on each of the 88 counties in Ohio, the largest number of tornadoes since 1950 is Lorain and Richland counties.

The largest outbreak of tornadoes occurred in April of 1974.   Over a 24 hour period, 147 tornadoes were confirmed from southern Michigan to southern Alabama totalling 2600 miles of tornado path length.  Notice how the strongest tornadoes that day developed in the "new" tornado alley (Indiana and the south).

Back in 1985, eastern Ohio and western Pennsylvania and New York was devestated by a series of incredible tornadoes.  Newton Falls and Niles, Ohio near Youngstown were hit by an F5 tornado.11 people were killed marking this tornado outbreak as the most deadly since the 1974 outbreak. 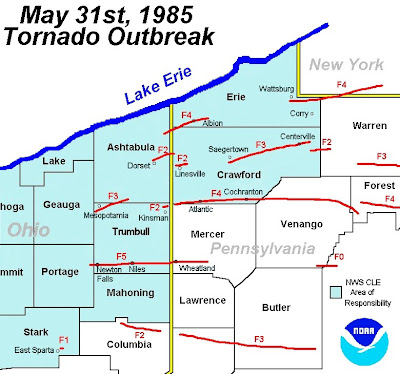 In more recent times (since 1989), northeastern Ohio has had some strong tornadoes as well.  Each triangle denotes the location and the strength of each tornado on a scale of 0 to 5.  Notice the two F3 tornadoes; one in the Akron area and the other NW of Medina. 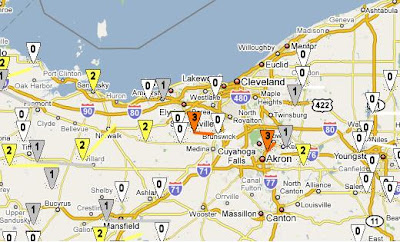