Email ThisBlogThis!Share to TwitterShare to FacebookShare to Pinterest
Just last Thursday, we received calls in the newsroom about an earthquake out in Lake County.  Each time an earthquake happens, it never ceases to amaze me how many people are shocked that they actually occur here in Northeastern Ohio.  The prevailing thought is that earthquakes in the Cleveland area are a relatively new phenomena.  In reality, quakes have been a regular occurrence in northeastern Ohio since the last glacial period 15,000 years with the root, quake-driving structures beneath the surface present for undoubtedly millions of years or longer.

In order to better document and understand the small quakes throughout the state, the Ohio Seismic Network was formed in 1999 to better track these tremors.  25 stations are distributed across the state, more in earthquake prone areas, to accurately detect and measure the quakes.

Rather than continue siting trivia about earthquakes, I've compiled a list of frequently asked questions from the Ohio Seismic Website that mirrors the requests we receive via email and phone calls each time an earthquake occurs.

Q:  What is the largest earthquake recorded in the Cleveland area?

The largest earthquake since 1700 was in 1986, January 31st pictured below.  This was the first earthquake where injuries were reported.  Prior to this quake, most people in Northeastern Ohio were unaware of how strong earthquakes can get in this area of the state.  It ranks third all-time in the state behind the 1937 quake in Shelby county. 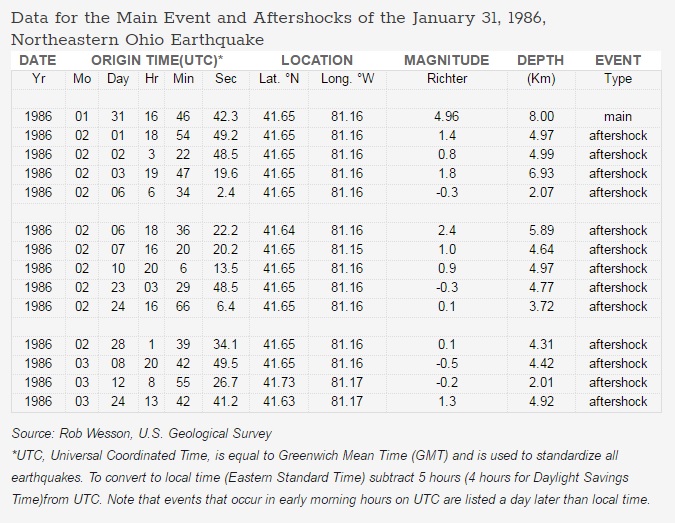 Q:  How many quakes have caused minor to moderate damage?

Only 15 quakes have caused this level of damage--a very low number.  Below is a map of the earthquakes across the state.  Notice the higher concentrations in our area (Cleveland) and in western Ohio.

Q:  Can we be affected by distant quakes like the ones in California and Alaska?

Absolutely.  Seismographs around the world can detect the waves from these massive earthquakes.  The 7.9-magnitude Denali, Alaska earthquake on November 3, 2002 caused water-level changes in some Ohio wells.

Q:  What causes the Ohio earthquakes?

In our area, extremely small fault lines--compared to the ones in California--are the focus of our seismic activity.  Studies have suggested that these fault lines might be remnants of an ancient fault line from a billion years ago.  Yes, BILLION.  See the known faults below followed by a map of faults around Cleveland, Ohio.

Q:  Since our ground in northern Ohio is more sediment, gravel and sand in nature, an earthquake is more apt to be weakened and absorbed causing less damage than if we lived on more rocky ground.  True or False?

The answer is false.

Q:  How many fault lines are there in the Cleveland area?  Can we see them?

There are many fault lines across the region.  A large number exist that are not mapped.  The map above
shows the mapped fault lines and other deep structures that cause earthquakes.

There are studies currently underway that aim to map the deep structures that cause the earthquakes
around the state. Since we do not have large earthquakes (magnitude 5 or greater) the data needed from earthquakes to map these small fault lines is incomplete.

Q:  Do earthquakes occur more often now than in the past?

Examining this list, you could easily conclude that this is the case.  But the list is misleading.  Most
earthquakes less than a 3 on the scale were not reported as they are today.  So the list is more detailed
now with better instruments to detect them.

Q:  Since the tsunami in the Pacific back in 2004, people have wondered if such an event could occur over Lake Erie.  Is this possible?

According to the Ohio Seismic Network, the chances are almost zero.  Why?, an earthquake of at least a 7.0 or greater would be needed over the lake.  The fault line would need to move vertically displacing the rock and sediment.  All of the faults in Ohio are horizontal.  Many scientists believe that the vertical displacement would need to occur in very deep water.  Lake Erie is very shallow--average depth of 62 feet and relatively flat on the bottom.  The depth of the ocean near the location of the tsunami in 2004 is more than 12,000 feet!

Q:  How do I report an earthquake?

Newspaper Scans After The Cleveland Tornado 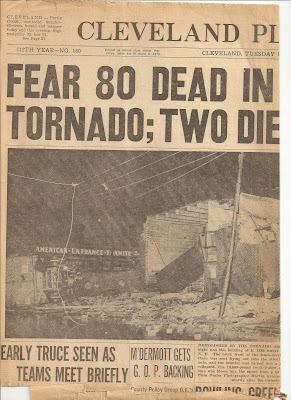 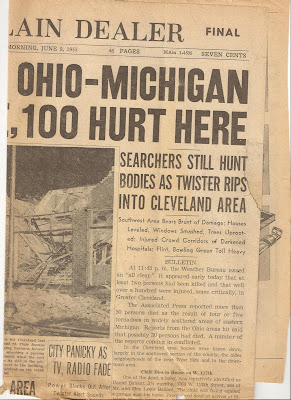 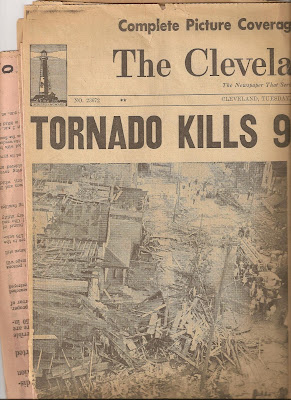 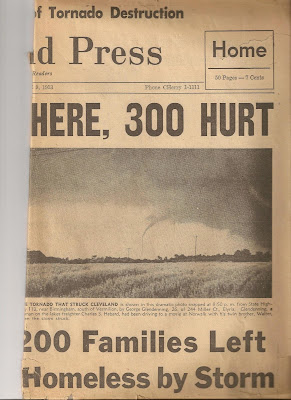 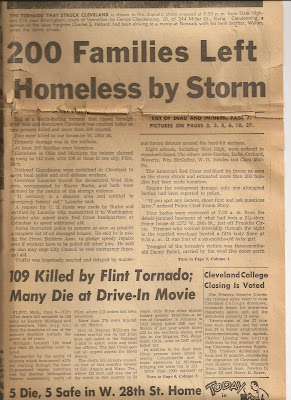 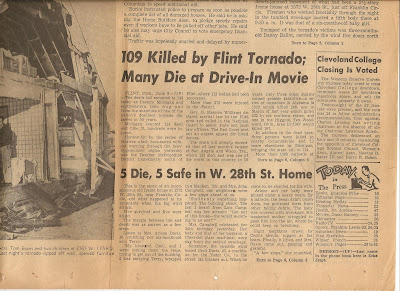 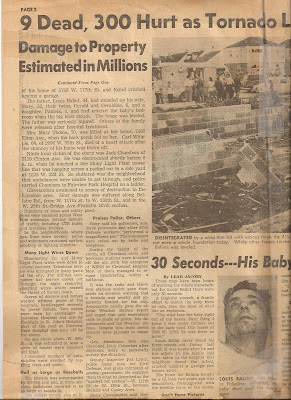 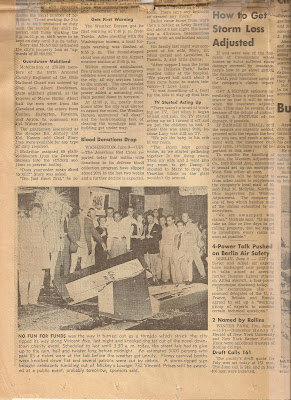 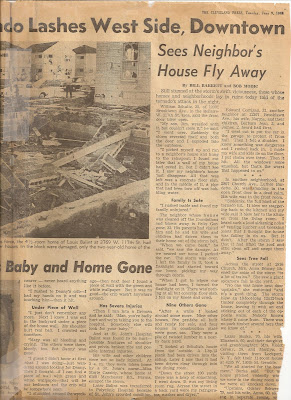 Email ThisBlogThis!Share to TwitterShare to FacebookShare to Pinterest
It was back in 1953, June 8th to be exact, that another tornado outbreak occurred in Ohio and Michigan which killed many people.  Here are two photos of the tornado from different locations.  The first was taken at Hopkins Airport.  The second was taken in Wood county; the same county where last weekend's tornado resulted in many fatalities.

Tornado warnings didn't exist in 1953.  In fact, it was illegal to mention the word "tornado" prior to World War II.  The tornado pictured below was an F4 with winds of over 260 miles per hour.   The tornado touched down in Birmingham, Ohio around 8:30PM and continued east.

It approached Hopkins Airport and continued into the western suburbs.  Damage was reported from West 130th to West 117th and Bellaire where 100 homes were leveled.  The tornado was around a 1/2 mile wide as it approached West 45th street around 10PM.  Damage from West 28th to West 25th and Detroit was incredibly severe.  Five people were killed in one home at Franklin Circle.  The tornado, now retreating back into the cloud, passed directly over Terminal Tower in downtown Cleveland.  The funnel cloud moved out over Lake Erie at East 40th street and fell apart.  A total of 18 deaths were reported across Ohio on June 8th. 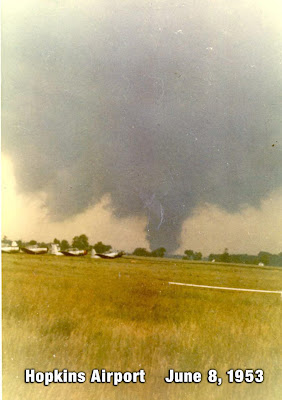 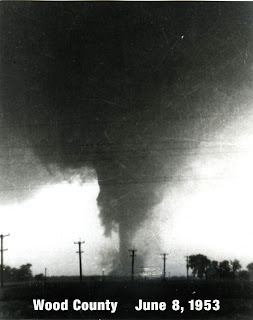 The tornado track from tornadohistoryproject.com

Email ThisBlogThis!Share to TwitterShare to FacebookShare to Pinterest
The tornado outbreak this past weekend across northern Ohio was somewhat of a rarity in that it resulted in fatalities.  The last tornado in northern Ohio that resulted in a death was in 2002. Prior to that, it was in the mid 1980s.

The Wood County tornado in northwestern Ohio Saturday night was upgraded to an EF4 by the National Weather Service.  It first touched down near I-80 and Oregon Road (East of Perrysburg) at 11:15 PM EDT and then moved through the south side of Moline and then near Metcalf Airport. The tornado then crossed the northwest side of Millbury into Ottaway County following Trowbridge Road and lifted at 11:30 PM EDT just west of Clay Center. At least 50 buildings were damaged or destroyed.  Here is a map of the path and damage with the radar loop as the tornado passed through.  The tornado recap is as follows: 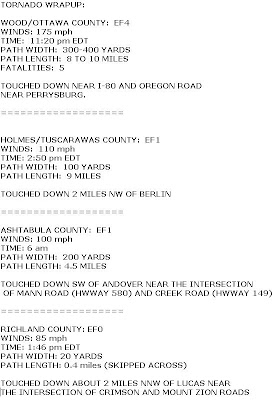 The complete update from the National Weather Service is HERE 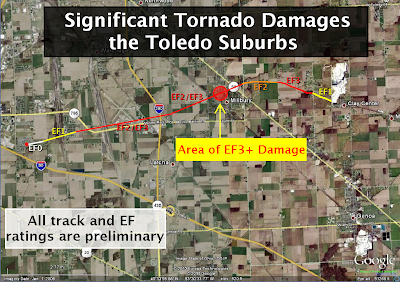 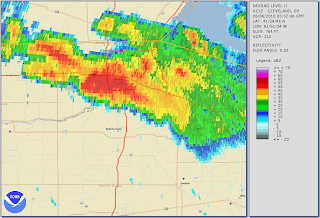 3 Other tornadoes were also confirmed in northern Ohio. Here is a basic map with path length, width and wind speeds.  The EF4 was the Wood County tornado.  The EF0 moved through Richland county 2 miles north of Lucas.  The northern EF1 tornado touched down southwest of Andover near the intersection of Mann Road and Creek Road traveling ENE.  The southern EF1 tornado developed in Holmes county 2 miels northwest of Berlin and moved southeast to Walnut Creek, Ohio then onto Sugarcreek in Tuscarawas County.  All information is courtesy of the National Weather Service HERE ON THEIR WEBSITE. Click on "previous version" numbers for the details of each tornado. 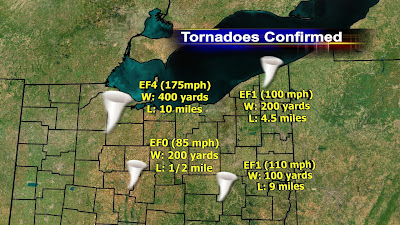 The Oil Spill Over Cleveland

Email ThisBlogThis!Share to TwitterShare to FacebookShare to Pinterest
I ran into this handy tool which allows you to superimpose the oil spill over any location using google maps.

Credit    http://www.beowulfe.com/oil/   for developing this mashup.  Just type in the location or zip code! 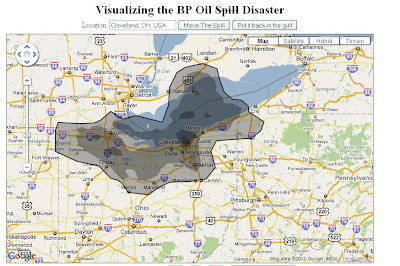 Email ThisBlogThis!Share to TwitterShare to FacebookShare to Pinterest
Yet another sinkhole has formed in Guatamala.  This image looks Photoshopped but its real. 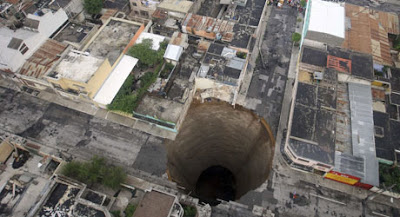 The depth of this hole is still unknown.
Guatamala is not unfamiliar with sinkholes.  Back in February of 2007, an underground sewage flow from a ruptured main dissolving the rock below it.  That sinkhole was 330 feet deep pictured below. 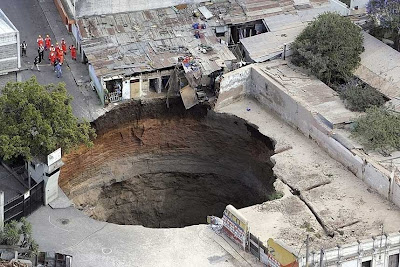