Hints on the Winter Weather Outlook for Cleveland

Email ThisBlogThis!Share to TwitterShare to FacebookShare to Pinterest
We use a tossed salad of variables in determining our winter weather outlook. The northern Pacific Ocean, central and tropical Atlantic Ocean offers some great clues as do the tropical patterns that stretch from central Africa over the Indian Ocean eastward over the central Pacific Ocean.  The upper atmosphere over the tropics reveals connections to jet stream position which dictate how variable the cold, arctic intrusions will be over the Great Lakes.  By analyzing these variables from past winters, we come up with the "best match" that  fits the upcoming winter for Cleveland and Northeastern Ohio.

Dividing up the winter into two parts gives a bit more clarity to the winter outlook.

One of the main drivers of our weather patterns are from ENSO or the changes in the tropical Pacific Ocean sea surface temperatures better known as El Nino (warmer than normal) or La Nina (cooler than normal).

Based on these parameters above, the years that match up fairly well are:

Add up these winters NOVEMBER, DECEMBER AND JANUARY to come up temperatures compared to normal would be: 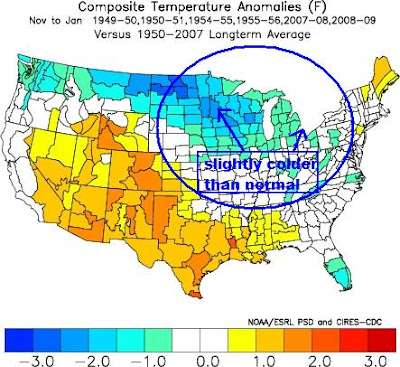 Andre Bernier has an excellent blog post on the "tricky, harder to predict" variables of winter. These variables all describe changes in the arctic and the north Atlantic which are more random than ENSO. You will notice that in the years these Arctic and north Atlantic factors were the strongest/coldest--early 60s, mid 1970s--(see Andre's first graphic), LA NINAS WERE PRESENT which fits this upcoming winter.  One of the strongest La Nina periods in recent times was the mid 1970s and we all know, if you are from Cleveland, how snowy those winters were!  These "wild cards" will play a significant role in how and when the arctic air pushes south and, early on, when and how much lake effect snow we will receive.

Watch what happens when we ADD the years in the mid 1970s where a weak to strong La Nina persisted with VERY STRONG/COLD ARCTIC patterns which subside in January, February and March:   THOSE WINTERS FEATURED NEAR NORMAL TO SLIGHTLY ABOVE NORMAL TEMPERATURES FOR NORTHERN OHIO! 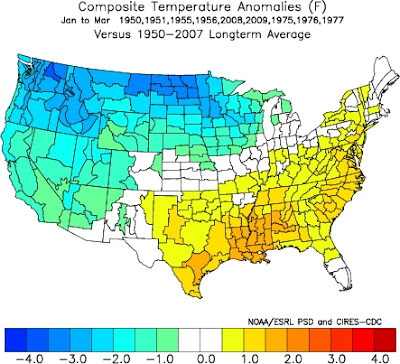 Let's hope for this weaker arctic pattern to return later this winter with its drier, less cold air in January and February. That should allow for the snow cover to melt which would keep the snow mold from forming on our lawns as it has in recent winters.
at 9:48:00 AM Posted by Scott Sabol No comments:

Record Rainfall/Drought. Have We Seen This Before?

Email ThisBlogThis!Share to TwitterShare to FacebookShare to Pinterest
Please read the maps below as an unbiased reader.

As always, let the data soak in. Let it breathe like a fine scotch. Chew it for a bit. Take it for a ride in your mind. Feel the synapses fire; the serotonin flowing throughout your cerebral cortex. Then and only then, create an opinion based on the data.

This data is from NOAA Earth System Research Laboratory which you can look up at any time.
Its open to the public. Here in Cleveland, we are about to break the all-time rainfall record set back in 1990. So I decided to check the rest of the country's rainfall data as compared with the last 60+ years.

I used the years previous that best fit this year's conditions: Strong-weakening-then-building La Nina, Pacific is in a cold mode (PDO negative) and the Atlantic in a warm mode (AMO is positive).

Below are the three sets of data I dug up from January to September of each of the 4 years. Precipitation compared to normal, Temperatures compared to normal and the Palmer Drought Index which describes how severe the ground conditions are wet or dry. The LEFT MAP shows PRECIP ANOMALIES. 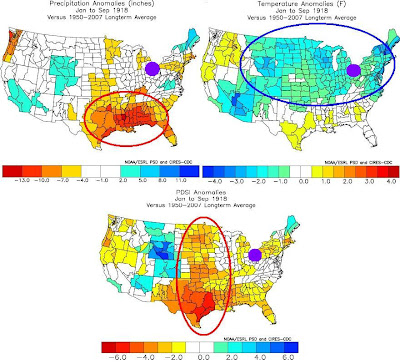 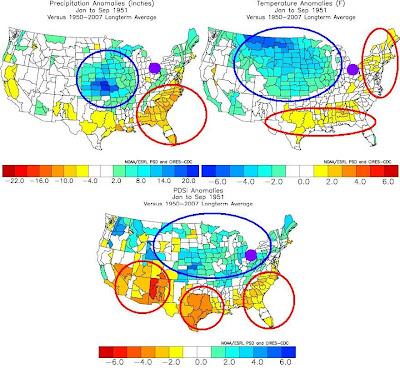 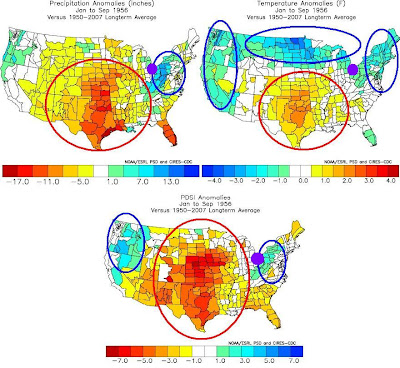 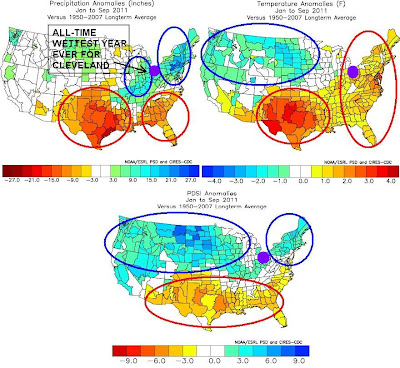 No wonder my tomato plants didn't do well this year. Way too much rain and not enough sustained heat this summer. Just for the heck of it, what was it like in the middle of the Dust Bowl 30s? Here is 1934: The above normal rainfall off of the coast was due to a tropical storm in September. Otherwise, it would have been a very dry year indeed! 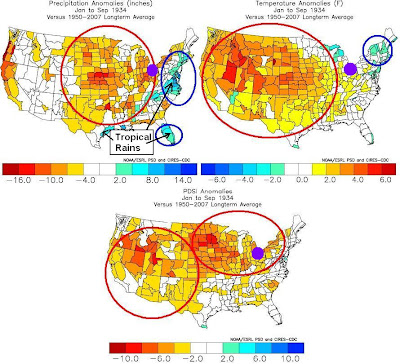 As you can see, severe drought in Texas and in the Midwest is frequent in La Nina years with a Cold PDO especially.

What the media never mentions are these naturally occurring climate teleconnections IN CONJUNCTION WITH human induced global climate change.

While they are not mutually exclusive, naturally occurring teleconnections are well documented going back to the 1880s. I'd like to think that Climate Change is a toss salad of both natural climate cycles/teleconnections and AGW.

My beef is you only hear about the AGW component. It only reinforces the "science isn't cool" mindset among the general public. Scientists are already viewed as "geeks" and "elitists" completely out of touch with reality. Painting an incomplete scientific picture only makes this notion worse.

Back to the comparison: Could this record-setting rainfall be a harbinger of what is to come for this winter? See my previous post on some hints on January.

The winter weather Outlook is coming on November 3rd!
at 10:24:00 AM Posted by Scott Sabol No comments:

Is the Atlantic the Key to a Cold January?

Email ThisBlogThis!Share to TwitterShare to FacebookShare to Pinterest
Over the years, we have learned to use analogues from previous winter in formulating our winter weather forecast. Recently, most of this data was made accessible on the internet for anyone to play with. Want to compare El Nino with temperatures in February for instance? Its right there. How about the arctic cold in December with January snowfall? Not to worry. its readily available to any backyard weather fan to analyze. Without going into great detail, the indices we are looking at for this winter parallel several winters in the past especially the early 1950s--not completely but pretty close.

One of the factors that doesn't completely match up is the Atlantic tropical sea surface temperatures. Many meteorologists.climatologists believe the role the Atlantic Ocean plays in our winter temperatures can be significant. Why would we pay any attention to this when its obviously so far away from North America? The same question we could ask about El Nino since it occurs in the middle of the Pacific Ocean. Yet we know that changes in the Pacific Ocean play a direct role in the weather across the US.

First, look at the sea surface temps from January of 1950 and 1951. Notice the colder than normal water in the middle of the Atlantic

Although this isn't the only factor that had an effect on temperatures in these years, look at the warmer than normal temps across the eastern US 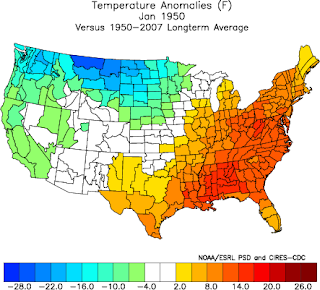 Compare those Januarys to the last January (2009) that best fit the early 1950s: January 2009. Notice how much warmer the sea surface temperatures were.

The resulting temperatures were well below normal 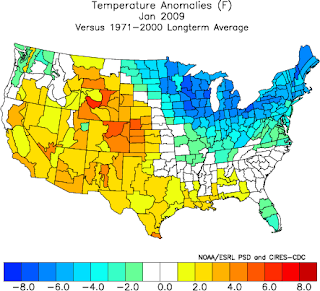 The high was well off of the coast and the cold, trough was smack, dab in the middle of the Great Lakes and eastern US. The resulting snow for Cleveland was mindblowing: 40.5", second most only behind January of 1978

How about this January? Look at the Atlantic sea surface temperatures going into October. They are not as cold as 1950 or 1951 but there is some evidence of cooling in pockets. Whether or not this continues for the remainder in the fall is still uncertain. 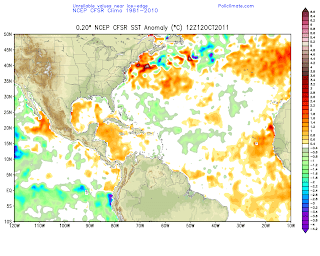 Could this "Atlantic cooling"--if it continues--create a "not as brutal" January for northern Ohio and much of the east coast (all other factors being equal)? If you are a snowplow driver, stay tuned. More on this in mid-November when the new temperatures come out!
at 9:09:00 AM Posted by Scott Sabol No comments:

Why Science Needs To Be On Social Networks

Email ThisBlogThis!Share to TwitterShare to FacebookShare to Pinterest
...because most people are there...and it GROWING!
Science and the Public: Why Every Lab Should Tweet
View more presentations from Christie Wilcox
at 10:00:00 PM Posted by Scott Sabol No comments:

Will Cleveland Break the All-Time Record for Yearly Rainfall in October?

Email ThisBlogThis!Share to TwitterShare to FacebookShare to Pinterest
After the past week we had with low, hanging cloud cover with intermittent rain, its easy to answer a resounding YES! But the pattern has done an about-face highlighted by a fall "Omega Block" over the central US. When lows stall and get cutoff, the result is the week that we had last week. When the Omega Block sits overhead, we bask in long periods of sunshine and super-dry air as we have now 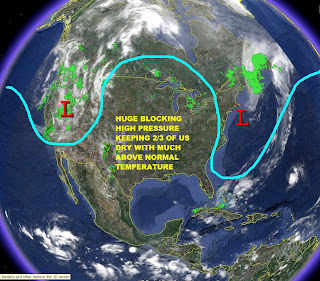 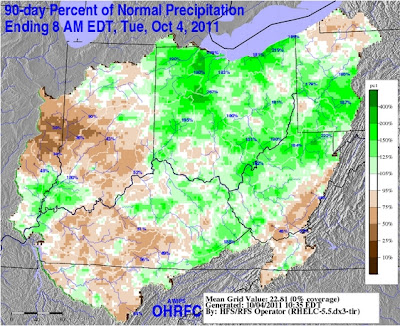 For those of you who like graphs, the rainfall numbers each month are well above the norms 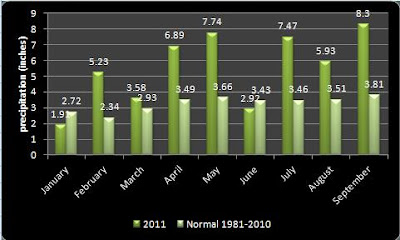 So back to the original question. Will we break the record this month?  The long range projections squeeze out the Omega Block slowly.  First, rainfall Monday of next week.  Still dry here in Northern Ohio 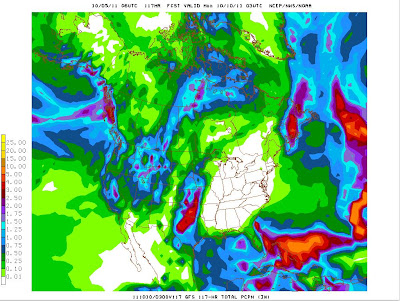 Thursday the 13th, the southern moisture and the cold front out west eliminates the Blocking Pattern almost entirely 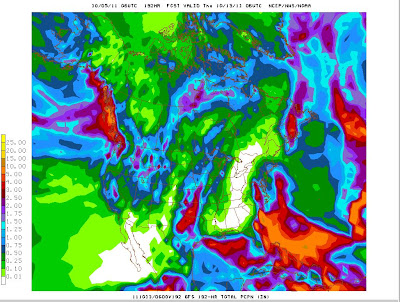 Blocking patterns don't last long late October/early November.  Rain will return late next week but not enough to break the record. We'll have to wait for another system by month's end or early November. By then, we won't care about rain as much as the start of the lake effect snow countdown. I can't wait!

Email ThisBlogThis!Share to TwitterShare to FacebookShare to Pinterest
After more than 5 days with rain and a thick low, hanging overcast, its nice to see the sun. October typically sees 52% sunshine overall so we have some ground to make up. 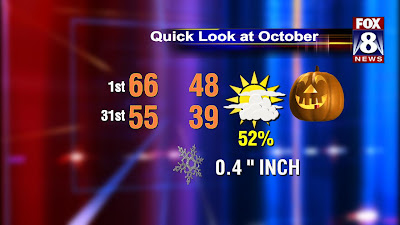 In fact, this stretch of dry days will be long lasting. The 8 day shows roughly 8 days of sunshine with above normal temps. Does this happen very often?  The data shows it happens more than we think; 4 times since 1990!

So if you are heading to Szalay's in Peninsula to pick out some pumpkins and try the corn maze or walk along the Cuyahoga River on the bike path, the temps and sun will be perfect.  Also, head out to Mapleside Farms. The hayrides are fantastic!


What does the early winter have in store?  Here is a hint:  The pattern is looking eerily like the winters of the early 1950s. More on this later this month....Here we go!
Share |
at 11:36:00 AM Posted by Scott Sabol 3 comments: