Email ThisBlogThis!Share to TwitterShare to FacebookShare to Pinterest
This unseasonably cool pattern across the Great Lakes and upper mid-west hasn't been completely unexpected. Back in April and early May, we talked about how this summer would feature periods where temperatures would drop below normal. Take a look at the 12 day stretch from July 15th to July 26th. The area of the US that experienced below normal temperatures this year is exactly the same as 2009.

2009 was one of our years we used as a guide in formulating our summer outlook. Remember, this does not include this week's cool-down. I'll redraw this anomaly map at the end of this week.

Water temperatures in the Gulf of Alaska are off-the-charts above average this summer (as it was last winter).

The above normal Gulf of Alaska water temperatures have enhanced the western high pressure ridge by pushing the jet stream further north. The movement of the jet stream is indicated with the red arrow. The strongest portion of the jet stream (highest winds) is shown with the warmer colors over Alaska. The jet on the east side of the ridge dives southeast in the center of the country and bottoms out over the Ohio Valley where the trough is located.

The PNA index is used to measure these pressure patterns across the Northern Hemisphere. When the PNA is positive, the ridge is very strong out west and the trough/low pressure is strong east as it has been since last winter. You can read about it more HERE.

The southeasterly jet becomes the conveyor belt for frequent rain and thunder events leading to above normal rainfall across much of the Great Lakes, Midwest and Ohio Valley. This also leads to more frequent periods of below normal temperatures.

For perspective, July in Cleveland, Ohio finished the 6th coolest since 1900.

The average high temperature in Cleveland from July 15th to July 31st was the the second coolest on record! 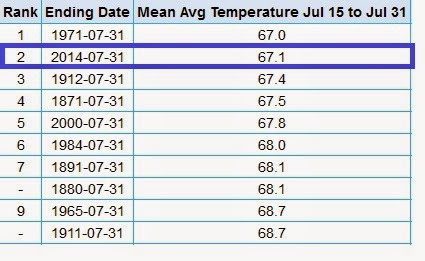 So the warmer Gulf of Alaska water and the drought out west have significantly boosted the high pressure ridge out west which is reinforcing the trough/cool pattern further east across the midwest and Ohio Valley.  This is not a complete list of the drivers of this summer pattern. The weak El Nino, which garnered a lot of attention during the spring, has had an influence too but not to a major degree. The weak El Nino will factor into our winter outlook which I'll talk about in the fall. Let me know of any other major contributors that I've missed.

Bottom line, it doesn't look like this pattern is going to change anytime soon!

Major Cool Down Next Week Similar to July 2009

Email ThisBlogThis!Share to TwitterShare to FacebookShare to Pinterest
Get ready for a major cool down next week! 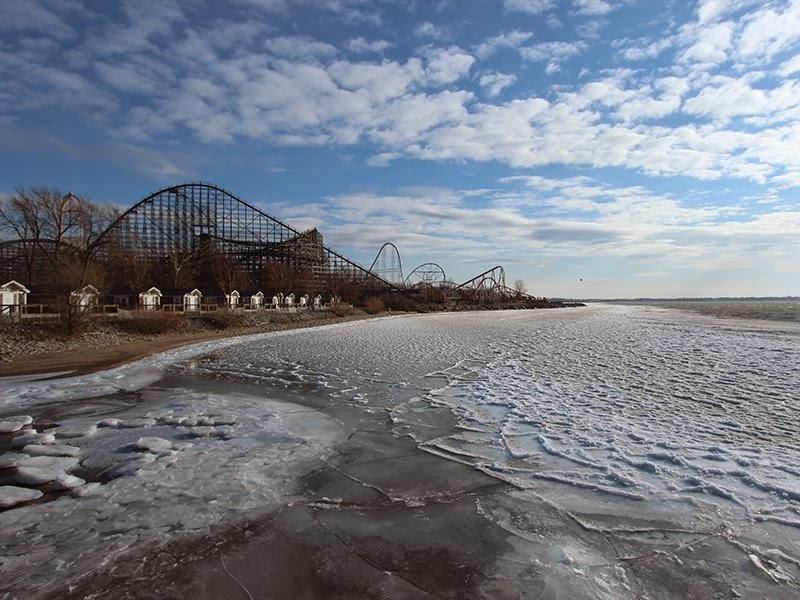 This picture of Cedar Point in winter might be overdoing it a bit. If you are heading there next Wednesday, I would suggest bring a sweatshirt.

While I was skeptical on biting to quick on this solution late last week, I quickly made adjustments Monday to reflect the huge changes for next week for two reasons:

1) The recurving typhoon. Typhoon Neoguri began a trek northwest then recurved toward Japan. When Typhoons recurve like this, it is a reflection of the overall hemispheric pattern which if followed "downstream" over North America typically means a major cool down across the eastern half of the US. This idea is called "The Typhoon Rule". 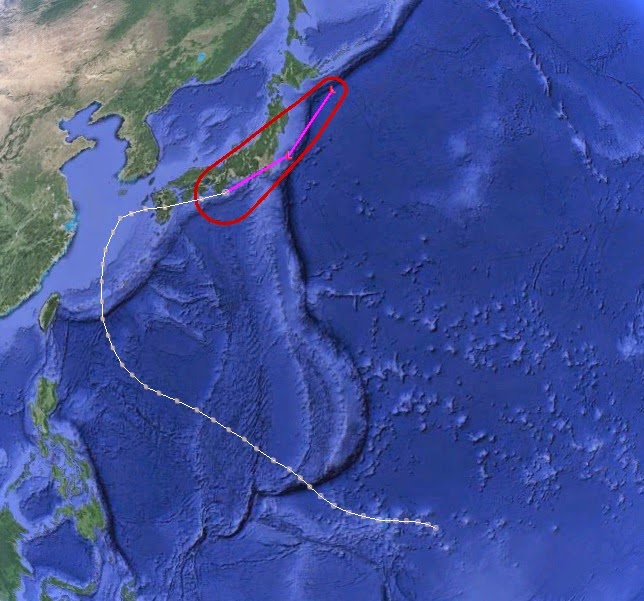 A ridge of high pressure in the western Pacific deflects the typhoon. This boosts the trough over the Gulf of Alaska which keeps the western US ridge going which in turn drives the trough/cool across the eastern US.  While this "rule" shouldn't be used to determine specific day-to-day forecast details for any location, it gives us a very good indication of the overall jet stream pattern. Based on that, we can get a general idea of what to expect 6-10 days in the future.

2) Model performance: I didn't bite on the cool down was simply the models kept showing the trough/cool pocket over the east flattening which was suggesting a warming trend back into the mid 80s. A quick look at the model performance showed that they were having a tough time beyond 5 days probably due to the erratic behavior of the developing El Nino and the atmosphere's response to it. (Note the up and down SOI numbers--South Oscillation Index).

However, the models started to trend "not-so-warm"again (I like that wording versus "cool" since 70-75 degrees isn't really cool) where they have stayed all week.

The probability of temperatures above 90 degrees might not make it north of Dallas or central Florida according to the CIPS site. 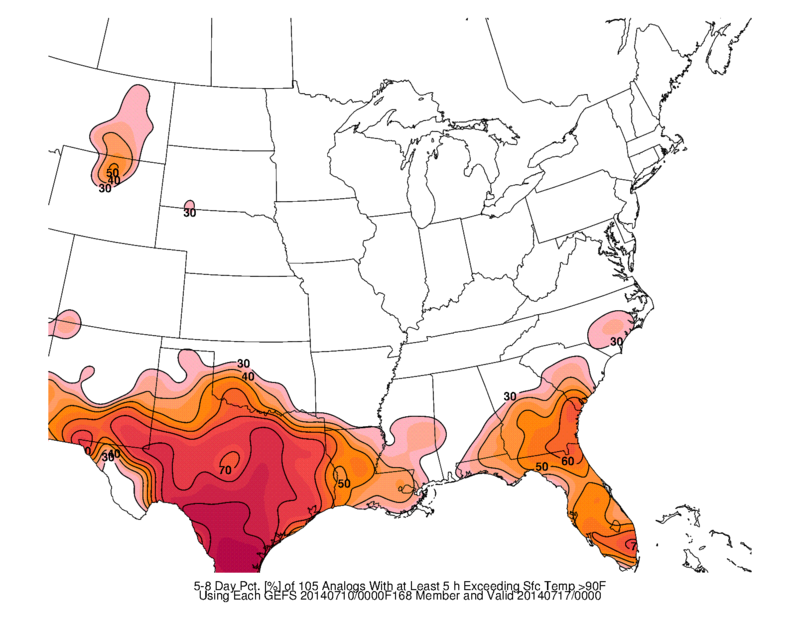 Remember July of 2009? A major cool down occurred that month between 7/17 and 7/20 which mirrors what is coming next week.

Aside from Monday, get ready for a week that is about 8-10 degrees below average. Very comfortable but probably not pool weather.

Hurricane Arthur Getting Closer To The Coast

Email ThisBlogThis!Share to TwitterShare to FacebookShare to Pinterest
Hurricane Arthur was upgraded from a tropical storm at 5AM EDT on Thursday.  Hurricane warnings are up for the entire North Carolina coastline north to the Virginia border. Max winds are 90 mph; should reach Category 2 intensity early 4th of July morning with winds of 105 mph. Arthur is still 200 mph SW of Cape Hatteras moving NNE at 10-15 mph.

Its interesting to see how Arthur evolved from a disturbance over South Carolina, sliding southeast over the ocean then doubling back north off the coast of Florida over the last 5 days. 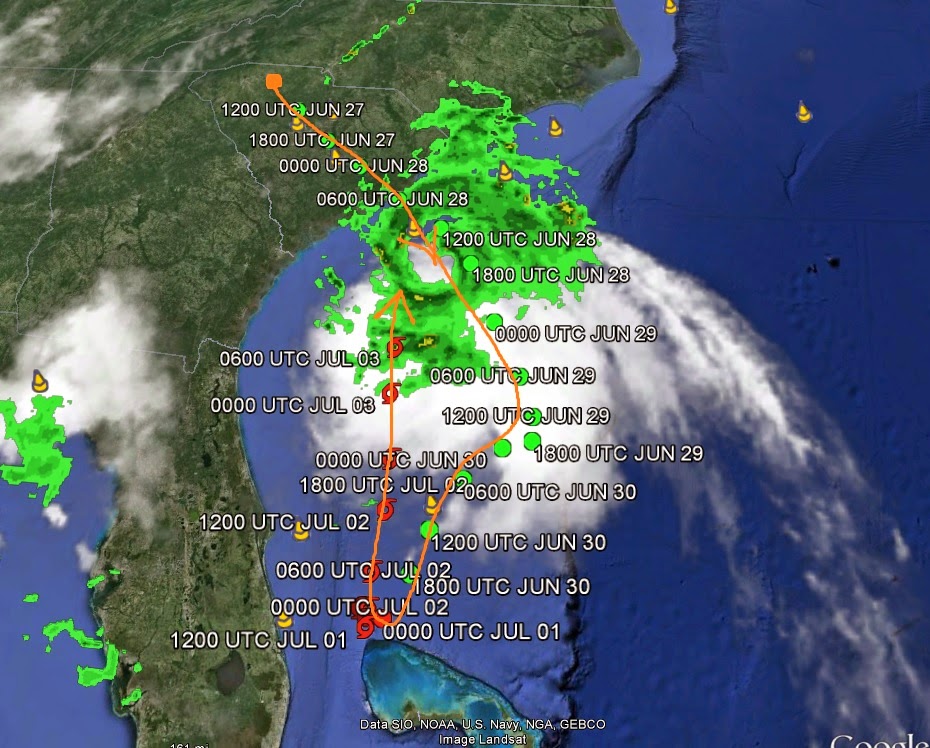 Most models take the center of Arthur over the Outer Banks. The HRRR shows it shifting track to the northeast hugging the coast later today. 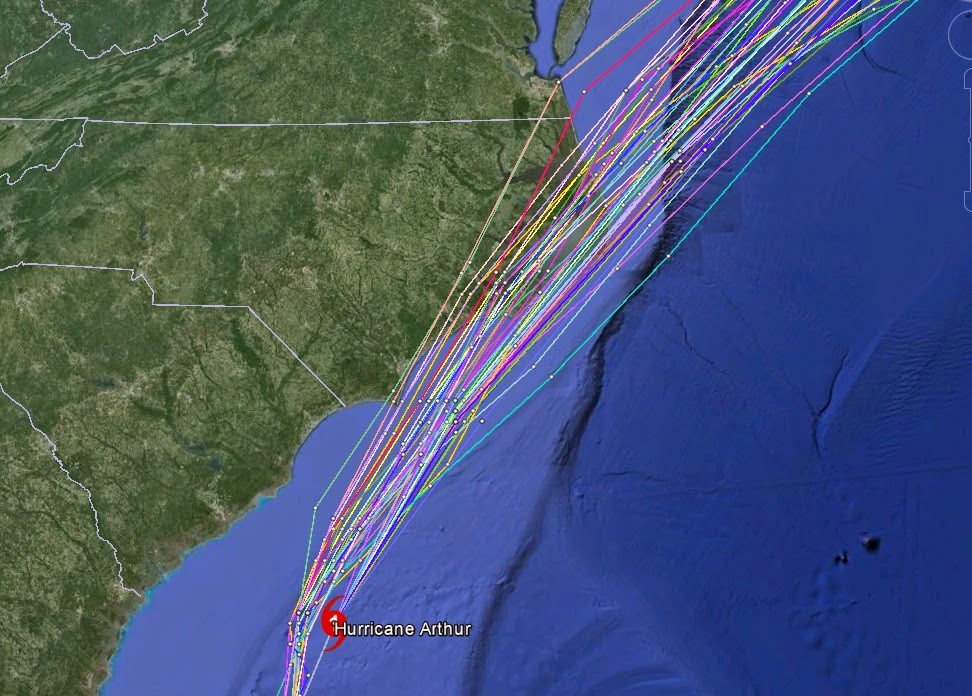 The National Weather Service office in Morehead, North Carolina has an excellent discussion on the hurricane with wind and wave forecasts. Winds will increase rapidly Thursday evening with max gusts approaching 100 in local areas along the Outer Banks. The window for 80-100 mph will be around 12 hours. 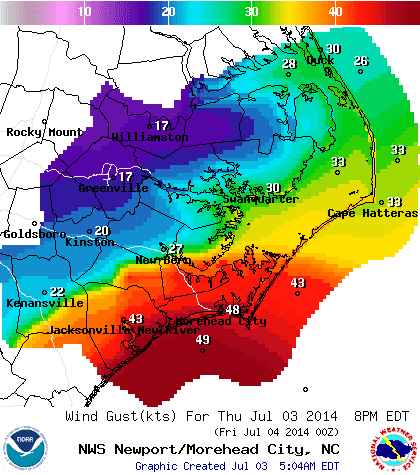 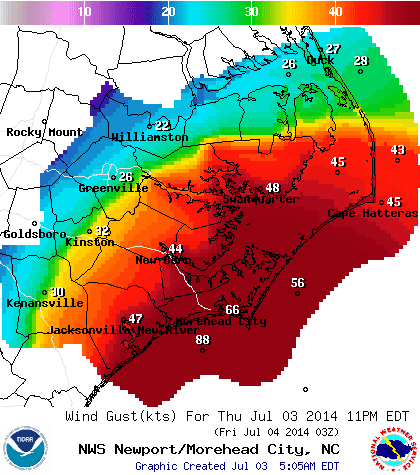 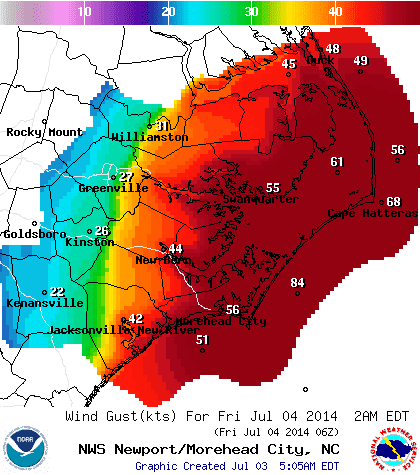 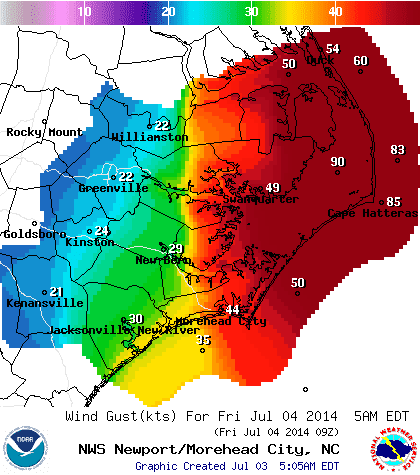 Total rainfall could exceed 7 inches in many areas. 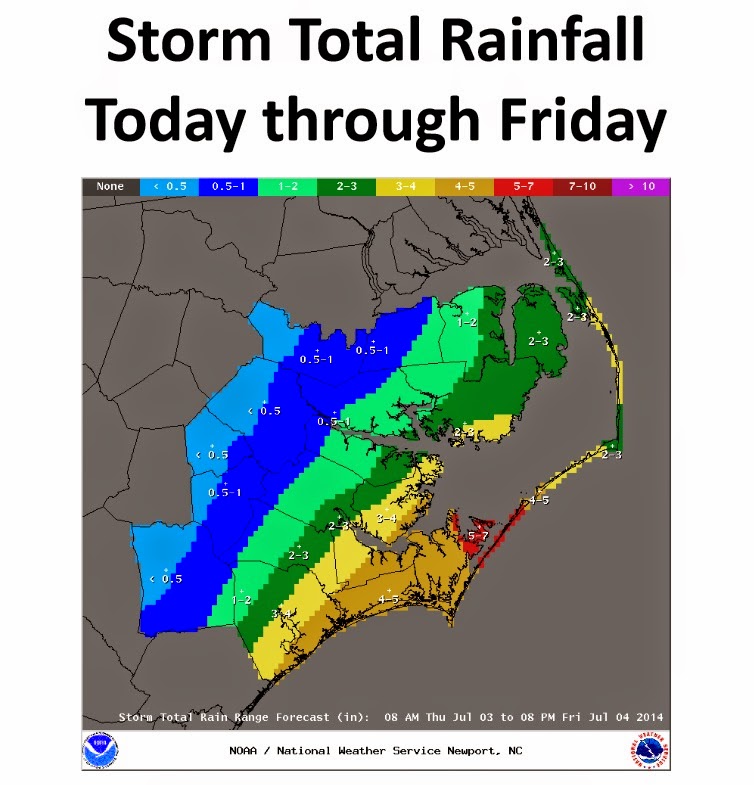 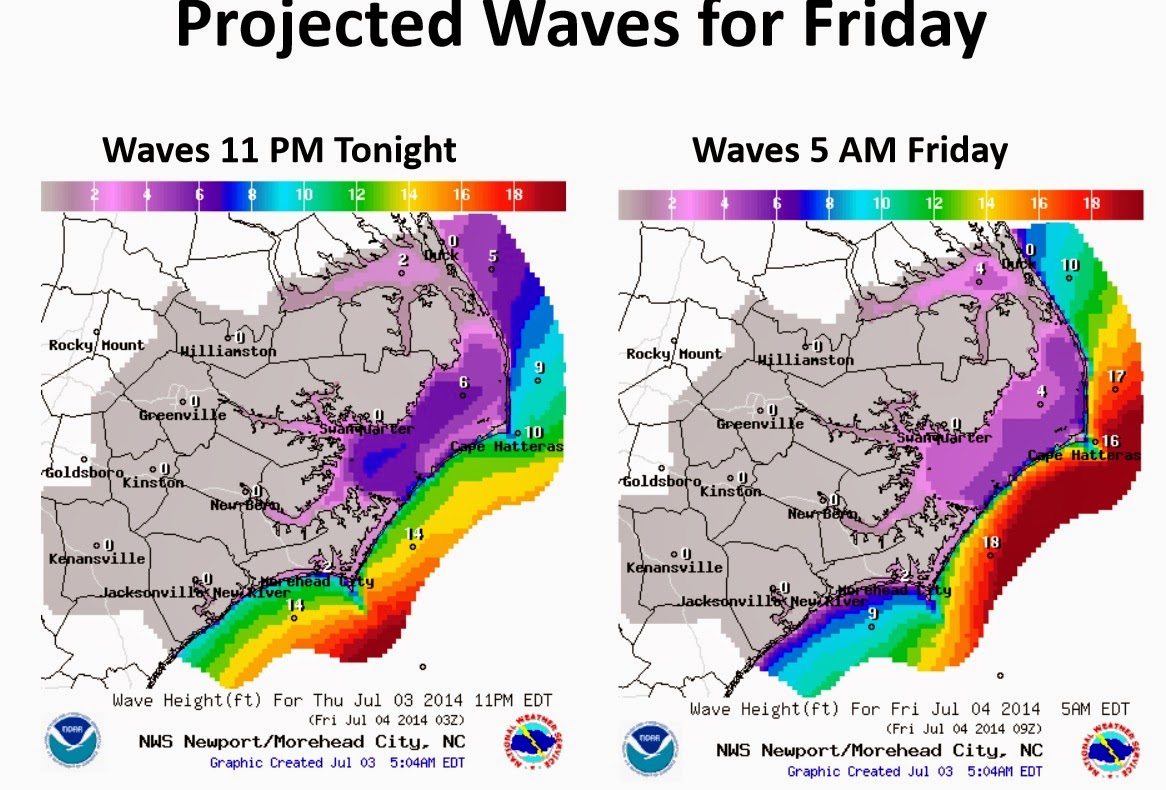 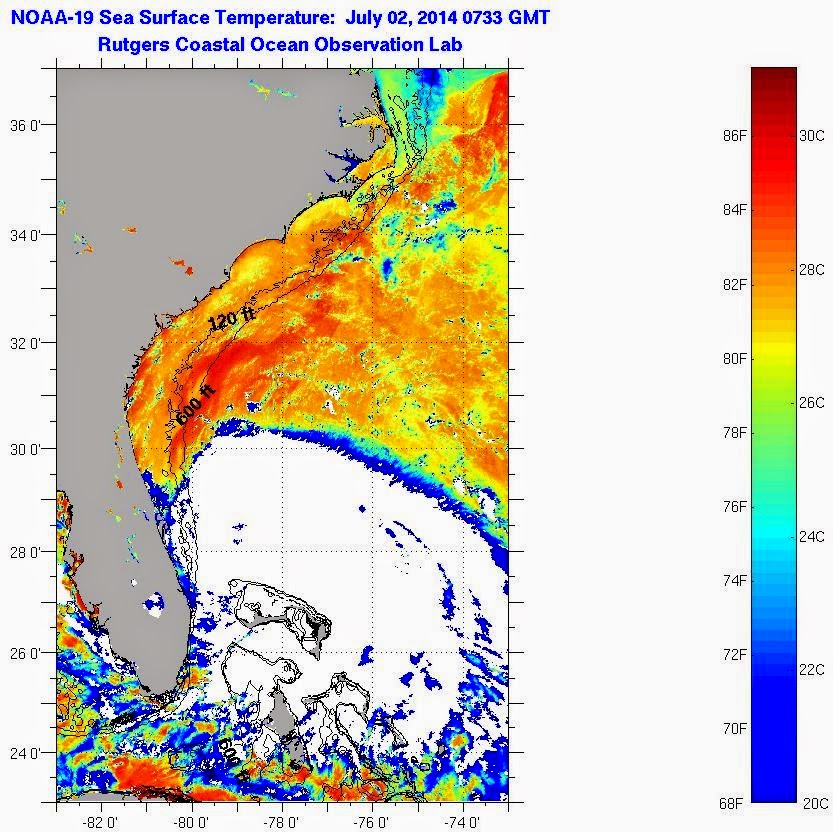 Ocean temperatures are between 80 and 85 degrees along the Outer Banks. 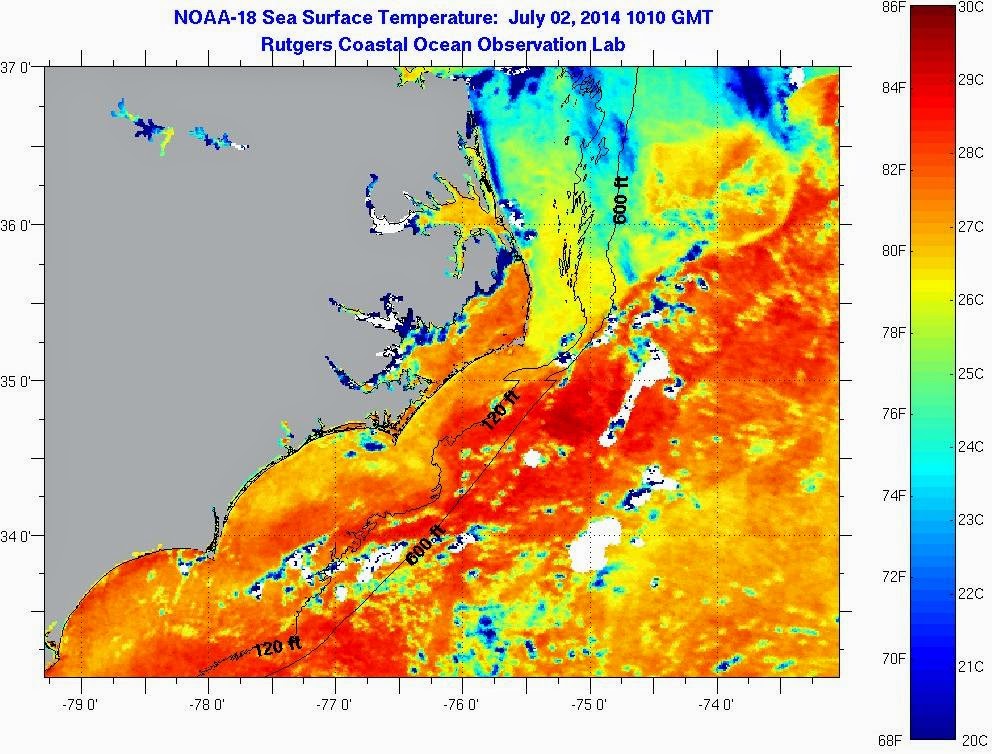 The smorgasbord of dynamic and statistical model projections all take this soon-to-be hurricane slightly off shore by the 4th of July. 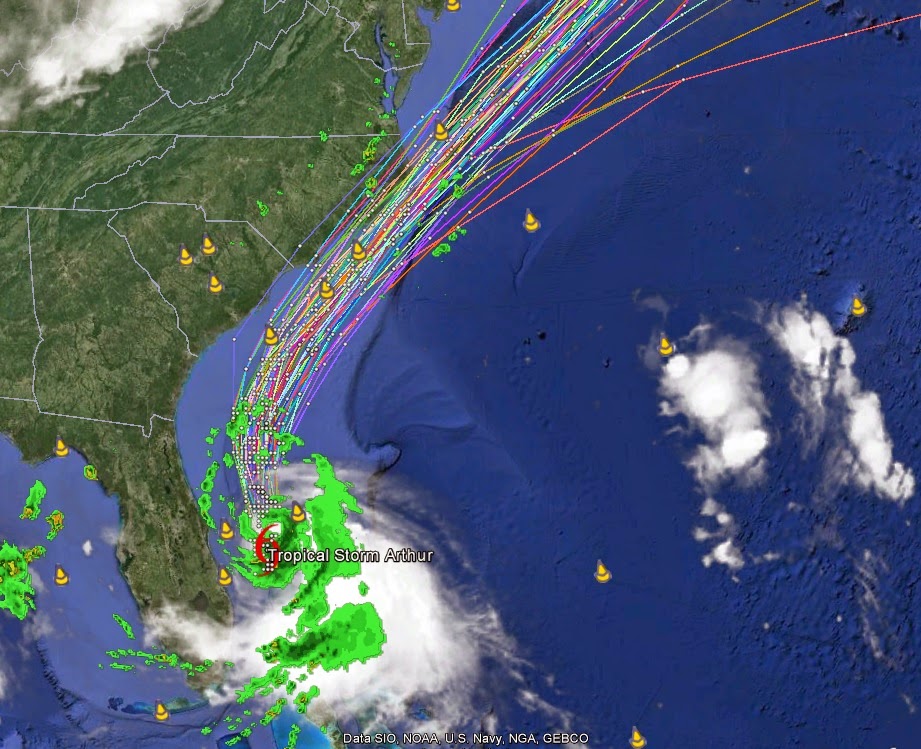 The winds increase along with significant pressure falls over the next 3 days. 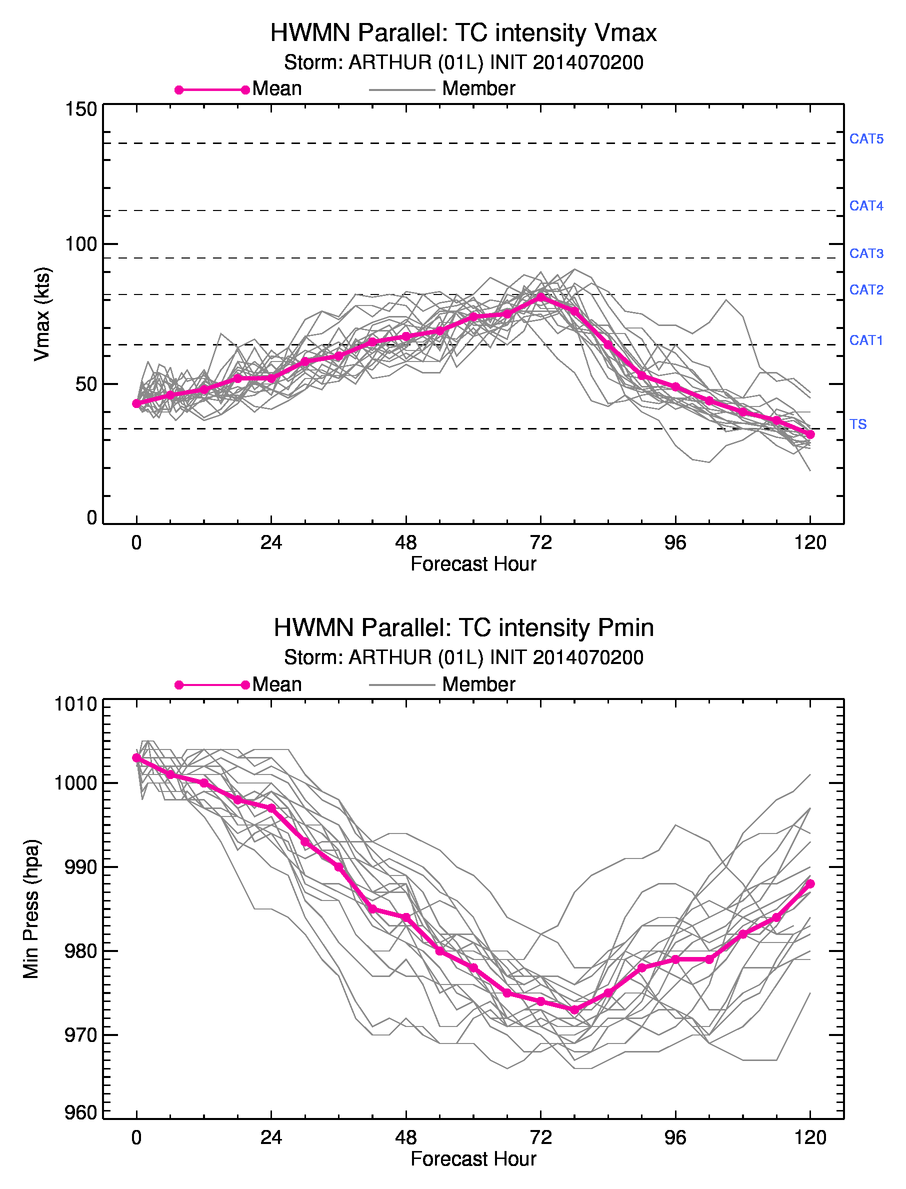 Buoy data near the Outer Banks will start to show spikes in wind speed and pressure drops. Check the buoy data tomorrow and Friday HERE 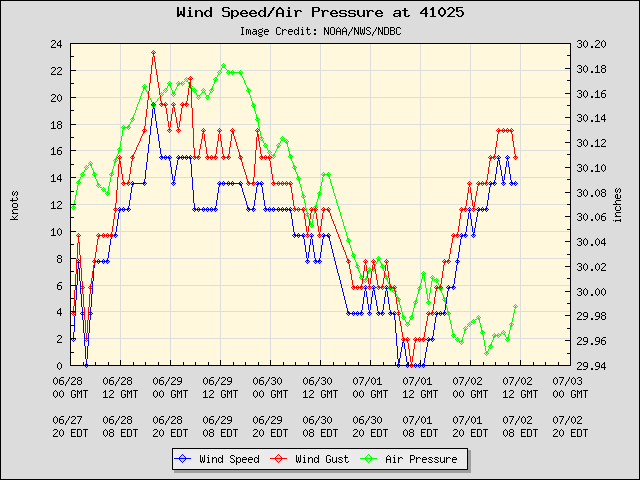 The heaviest rain should stay off shore on the 4th of July. 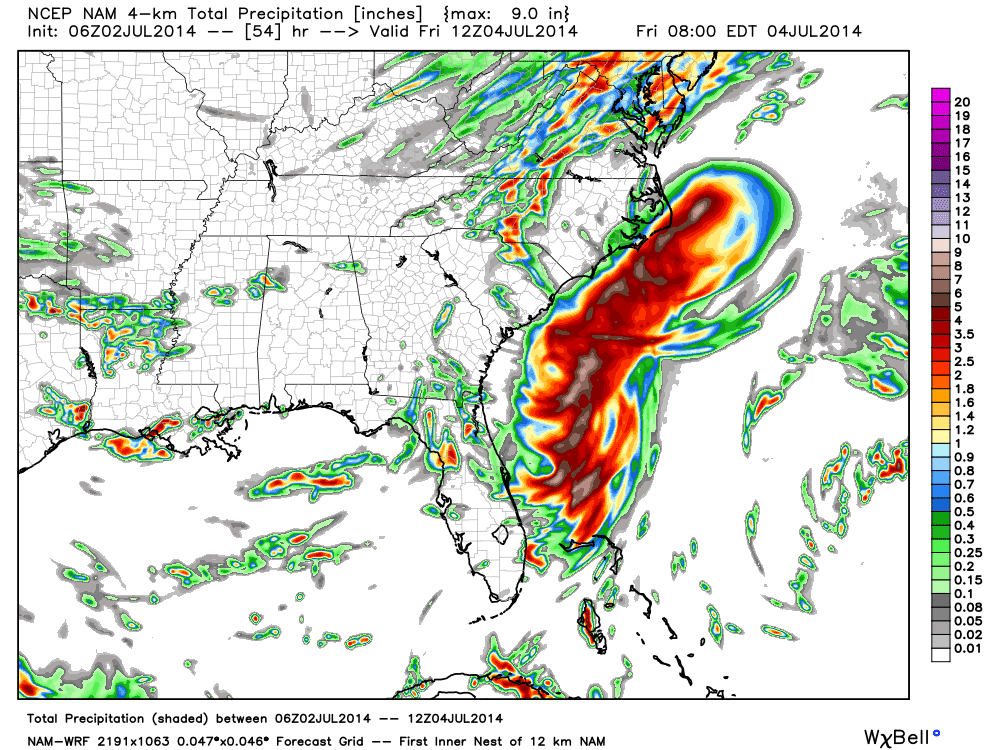 Email ThisBlogThis!Share to TwitterShare to FacebookShare to Pinterest
The first storm has officially formed in the Atlantic 32 days into the season. Tropical Storm Arthur now has winds of 50 mph with slow movement to the northwest. This SITE has a great infrared loop of its evolution.

The circulation is noticeable on the visible satellite Tuesday morning. This image shows its position relative to the east Florida coast and the Bahamas.  VISIBLE SATELLITE LOOP

Tropical storm wind (35+ mph) probabilities through Friday the 4th of July are the highest along the North Carolina coastline.

All of the computer models (spaghetti plot) keep the center of the storm slightly off the Carolina coast over the next 5 days. Google Earth plot is here 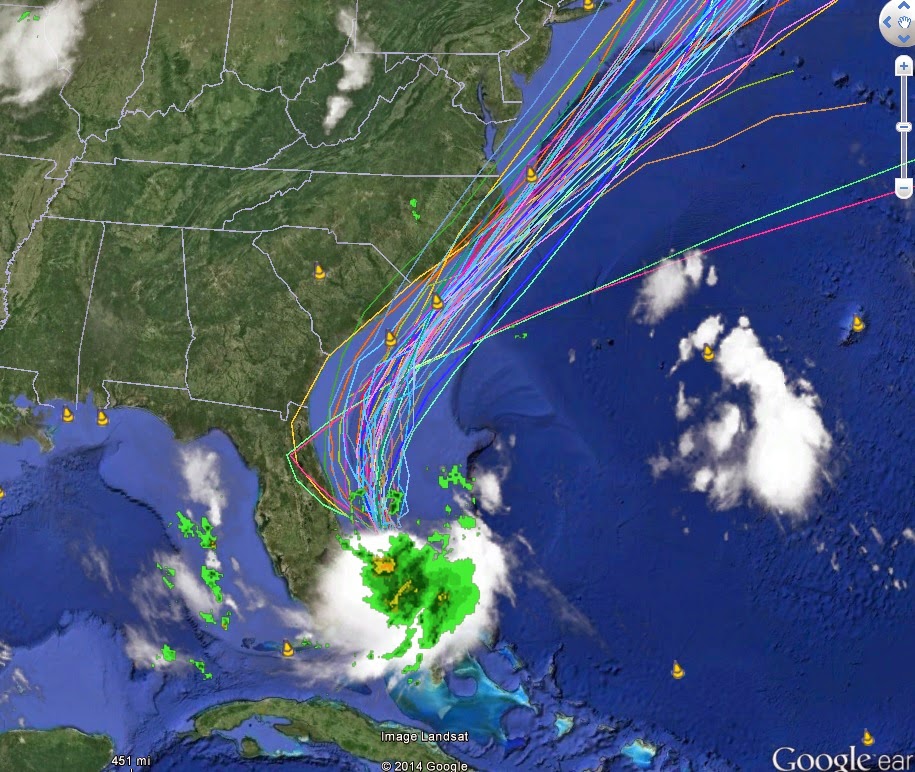 The initial model estimates put the eye of the hurricane over the Outer Banks on the 4th of July. 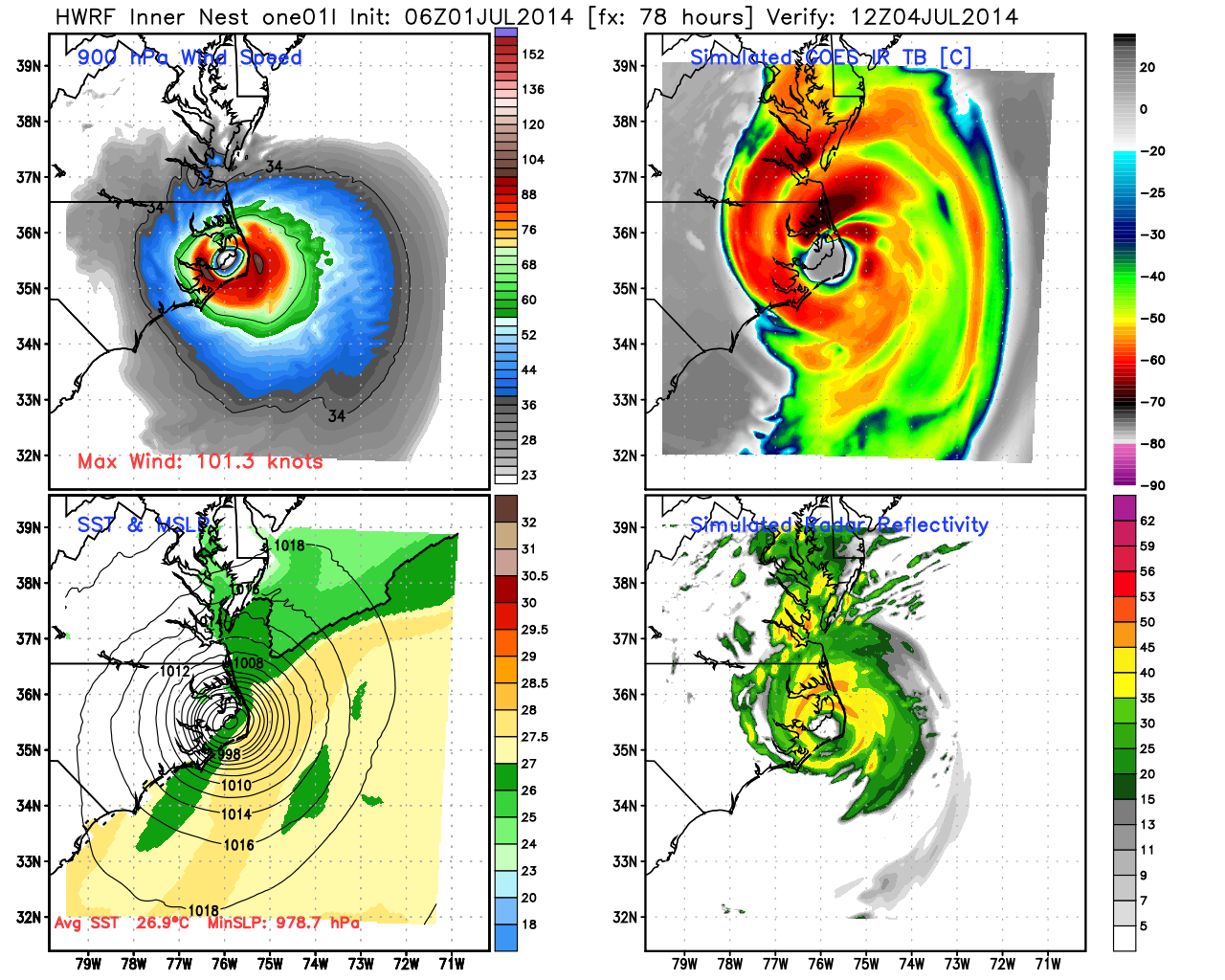 Official National Hurricane Center track as of noon Tuesday July 1st is this: 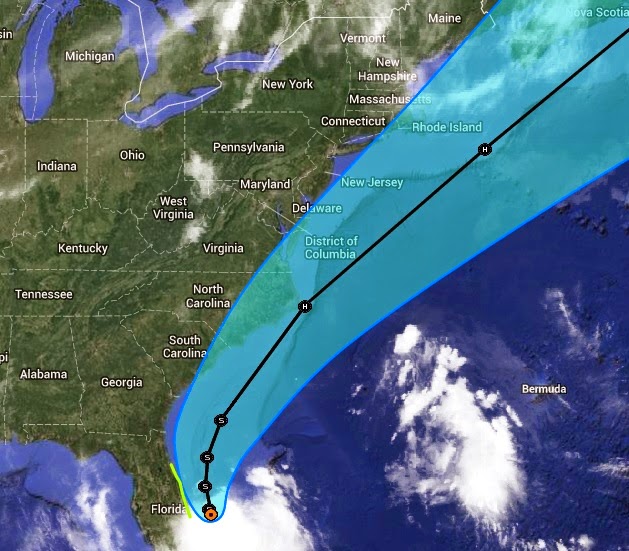