Part I - The Most Complete Summer Recap You'll Find Anywhere! 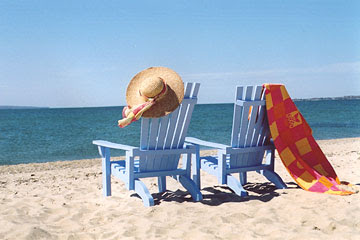 The autumnal equinox has come and gone. Summer is now officially over.  So it's time for the ANNUAL SUMMER RECAP.

First, how do we define summer?  There are three definitions of summer I believe cover it. Meteorological Summer which stretches from June 1st through August 31st. Meteorologists and climatologists use this three month period to keep historical data consistent. Astronomical Summer is defined as the period from the summer solstice (around June 21st) to the Autumnal Equinox (around September 2nd). This is what you see on the calendar.  Rarely does it correspond to the actual weather conditions. The third definition of summer is one that is closer to home for most us.  I like to call it Sensible Weather.  It's defined as our perception on when summer begins and ends usually marked by a holiday or big event, sometimes weather related.

Our initial outlook was for temperatures to stay above normal this summer. The temperature analogs taking into account ONLY summers after strong or super El Ninos with a weak El Nino state in late spring yielded this result. Warmer colors indicate above normal temperatures. 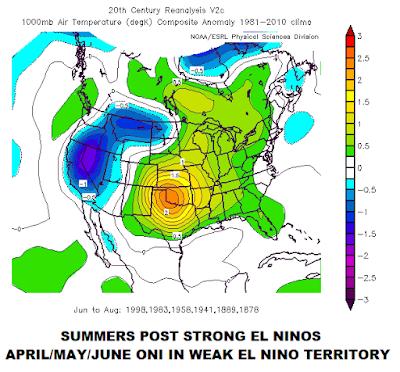 In reality, the result was a bit different especially across the west and New England: 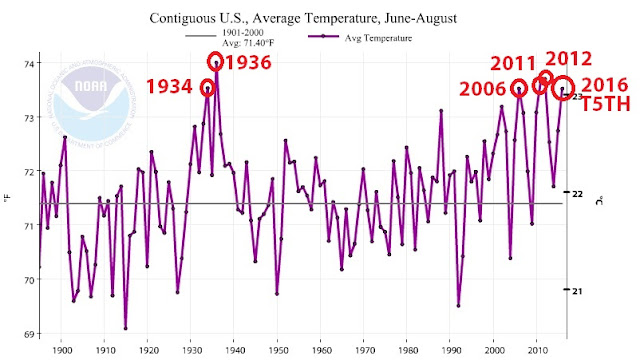 Alaska had only 2 days with below normal temperatures this year based on 25 stations. The second occurred on September 25th. 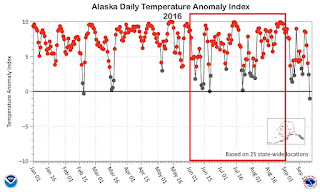 A quick look at the last five summer temperatures vs normal shows a large part of the central US has had at or below normal temperatures over the last 3 summers. 2012 was warmer overall. 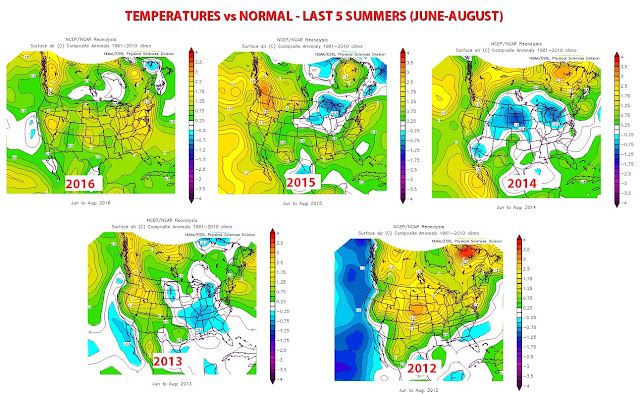 Early summer heat in 2016 was confined to the western US.

Notice the below normal temperatures in the corn belt in July which ran coincident with above normal rainfall (more on that shortly).

The core of the heat in August settled into the eastern US especially the Ohio Valley and New England.

I compiled the temperature departures nationally for each day of the summer. The waves of heat and cool are very evident.

The 500mB heights and the jet stream position was north through the central US and Great Lakes in June. Tornadoes this month were well below average since 2007. Yet the tornado coverage was mainly along the jet stream across the northern Great Plains and Ohio Valley. 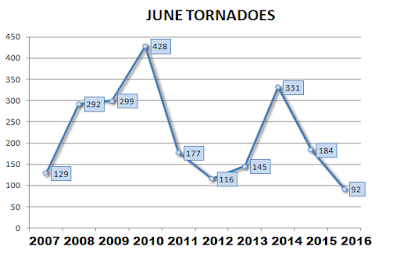 The jet stream shifted further south in July as the western ridge was pushed south. Notice the Bermuda High establishing itself over the southeast.

The southeast ridge expanded. The jet stream shifted north which boosted temperatures across the eastern US and dropped temperatures in the Rocky Mountain west. Tornado numbers surged compared to recent years. 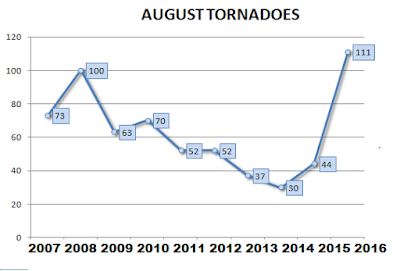 The active jet configuration created conditions favorable for severe weather and above normal rainfall in the central US. 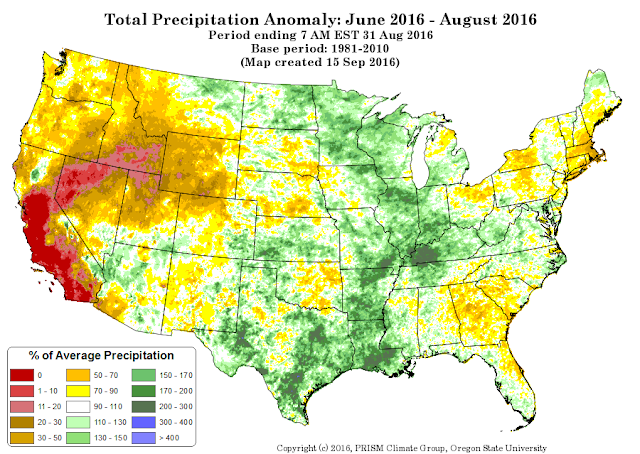 The corn belt warmth was tempered by the above normal rainfall. Summer temperatures didn't crack the top 10 (data from the late 1940s).

Extreme drought conditions prevailed in California and the Rocky Mountain west, the deep south--Georgia and South Carolina and from eastern Ohio into New England. 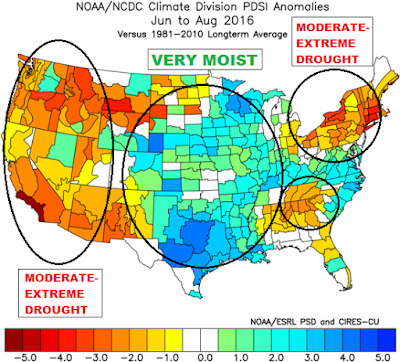 In my next post--Part II Summer Recap--I will focus on northern Ohio specifically...

What is Snowfall in Cleveland like AFTER Summers with Many 90 Degree Days?

Email ThisBlogThis!Share to TwitterShare to FacebookShare to Pinterest
Many ask me if there is a connection between summers with many 90 degree days and snowfall in the winter ahead.  According to this chart, maybe there is something to this. 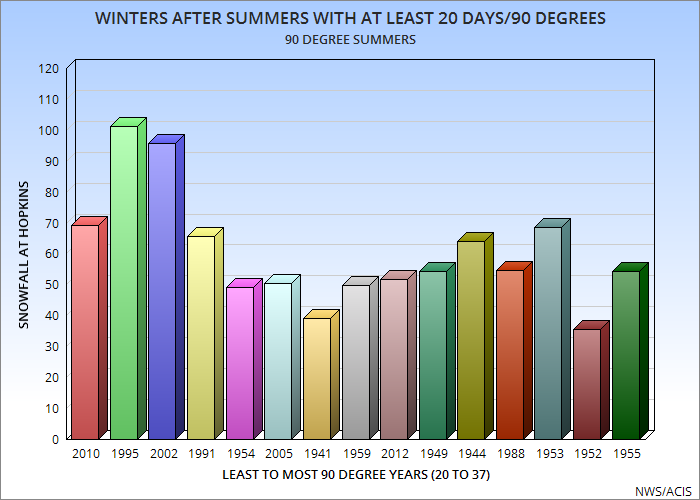 I caution anyone who uses JUST ONE piece of data in drawing a conclusion about any upcoming season as there are MANY components in determining seasonal outlooks.
at 7:38:00 AM Posted by Scott Sabol 1 comment: