Historically Does US Warmth In Fall Connect to Higher Eurasian Snow Cover?

Email ThisBlogThis!Share to TwitterShare to FacebookShare to Pinterest
The snow cover across northern Asia is now 3rd highest since record keeping began in the mid 1960s for early November.

The northern Pacific jet has been very strong and stable with little "waviness" until the last few days. The low over the Aleutian Islands is locked in place as the strong northern Pacific jet undercuts the low pumping up the ridge across North America locking in abnormally warm temperatures.

Is the high snow cover across Asia influencing the strong jet stream?  Is there a history of this in early November in very high/very low Eurasian snow cover years?

While this year's cool pool in the northern Pacific has expanded recently, three of the top four years had significantly larger and colder cool pools (reanalysis is in Kelvin). Interestingly, widespread US warmth from mid October to mid November only occurred in 2016, 2015, 2014, 2012 and 2009.

Comparing high and low Eurasian snow cover to the ENSO state shows a blend to either side--cool and warm. 8 of the 20 years occurred during a strong ENSO state. Overall, there doesn't seem to be an overall trend which suggests that other factors are at play aside from ENSO.

After the warmest period from June 1st to October 31st on record at the official NWS reporting station at Hopkins Airport, the Lake Erie water temperature is above any of the most recent years with the exception of 2005.

Each year regardless of the air temperature, the water temperatures dropped significantly to between 0°C and 5°C.

How will this affect lake effect snow?  If a decent shot of arctic air slides across the lake before the water temperatures fall around the first of the year, any lake effect snowfall could be significant.

I wrote several post a FEW YEARS AGO about the subject of Lake Effect snow.

Here are the ingredients for Lake Effect:

1. Temperature difference between the lake and the air aloft (5000 feet) has to be at least 13 degrees celsius. The more, the better.
2. Abundant atmospheric moisture independent of the lake
3. Wind speed
4. Wind direction
5. Fetch Length (How far does the wind blow over the lake)
6. Instability and instability depth (Usually driven by a cold front/trough and/or the lake temperature difference) Deeper the instability, the deeper the snow growth
7. Orographic lift (elevation differences between Cleveland and the snowbelt. 1200 feet in portions of Geauga county)Even if #1, 3, 4, 5 and 6 are present (the most common variables), subtract any one of these variables especially 2 and 5--sometimes 7 if the wind direction shifts) and snowfall forecasts can turn out much different than anticipated.

Will we see one of these 3 "flavors" of lake effect snow dominate this winter?  More on this next month. 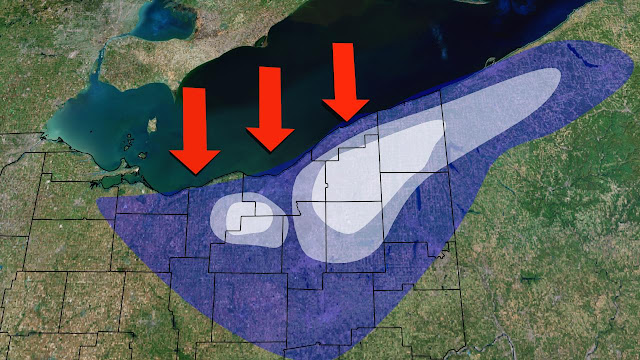 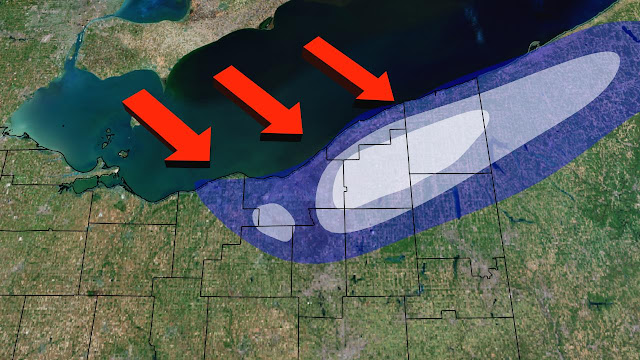 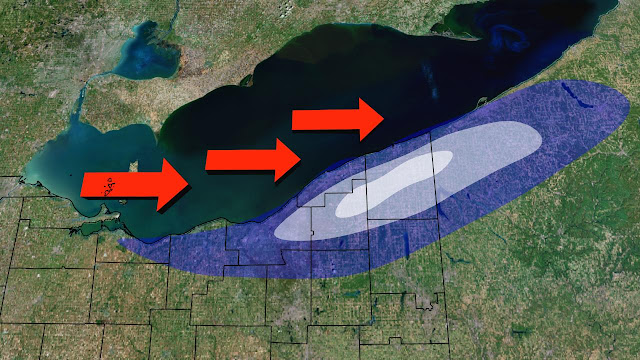