Email ThisBlogThis!Share to TwitterShare to FacebookShare to Pinterest
The EPO was forecast to drop significantly negative around New Years. 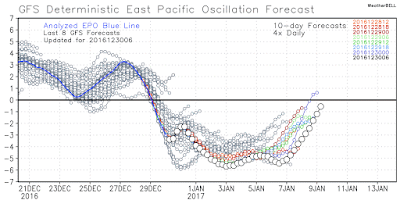 Today, the EPO has probably bottomed out with a slow increase over the next week or so. 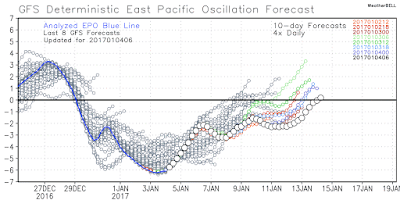 The EPO derived by finding the pressure changes between these locations in the northern/eastern Pacific Ocean. 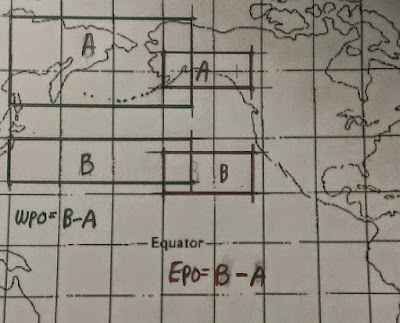 Notice how the Northern Pacific ridge evolved since Christmas to what it was on New Years Day. The SE ridge began to break down as the trough progressed east as the Greenland high shifted back west.

There have been only 3 other instances where the EPO dropped to under -400 in January for at least a few days. Each instance featured widespread cold:  1963, 1974 and 1991.  Notice the southeast ridge attempting to push warmer air further west in 1974 and 1991.

The models, both the EURO and the GFS kept the trough west until January 1st when it began ejecting the trough east.

The Greenland block suggests a -NAO (North Atlantic Oscillation) which connects to colder east. The southeast ridge should not be this strong. Yet the southeast ridge continues to linger for the last several weeks.  A Greenland Block argues against the southeast ridge. But the weak La Nina signal argues for it. Have there been instances historically in January where the EPO goes strongly negative (-300 or below) similar to the current situation with a positive NAO (stubborn southeast ridge)?  Yes.

The battle goes on. The key, I believe, lies in the cool pool in the northern Pacific Ocean. It has prevented a strong ridge tendency across the western US which locks in the trough across the north and central US. The southeast ridge is hard to overcome.

What does all this mean long term through the end of January?

1) The lack of change in the sea surface temperatures in the northern Pacific Ocean will make western US ridge development difficult. 2) The trough will continue to drift east bringing with it shots of cold but it will be transient. 3) The southeast ridge will continue to play havoc with forecasts reducing long bouts of cold across the eastern US for the foreseeable future. The NAO will have more of an influence the second half of winter.  Look for more panhandle-type systems the rest of the month similar to the one this weekend. 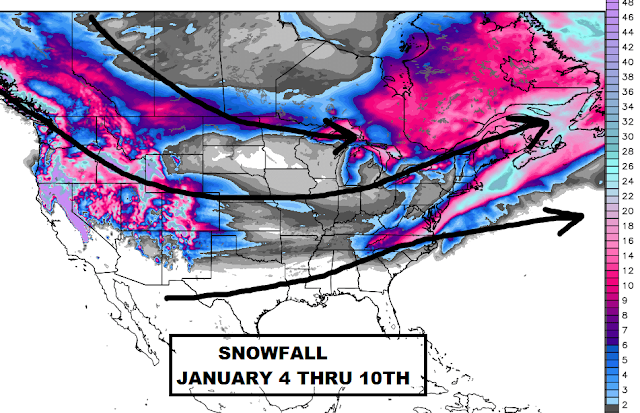