Is the Weather Keeping Indians Fans Away? 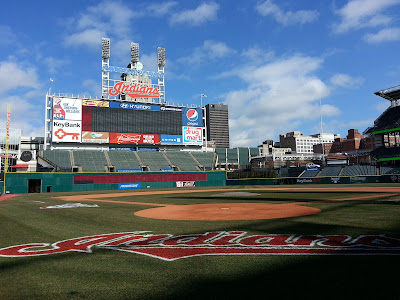 Yesterday on the morning show, we discussed why the Cleveland Indians attendance, even after their winning streak of late, still ranks at the bottom on MLB in attendance per game. 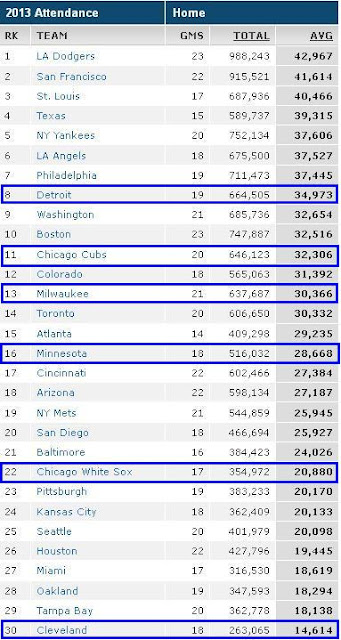 Answers ranged from northern Ohio's depressed economy, the Indians recent history of mediocrity, the cold spring weather to football being the more popular sport in Cleveland and the surrounding area. While all have merit, the connection between lack luster attendance and the changeable northern Ohio weather is the element that I wanted to investigate further. In the graphic above, I circled the cities that reside in cold climates.

First, I separated the attendance figures into two parts. The first part is home attendance in April and May since 1988. This counts the last 6 years at old Cleveland Municipal Stadium and the first 20 years at Jacobs/Progressive Field. The figures are through May 12th of this year. The second part is the home attendance figures for June and July until the All-Star Break for comparison which is at the end of the post. 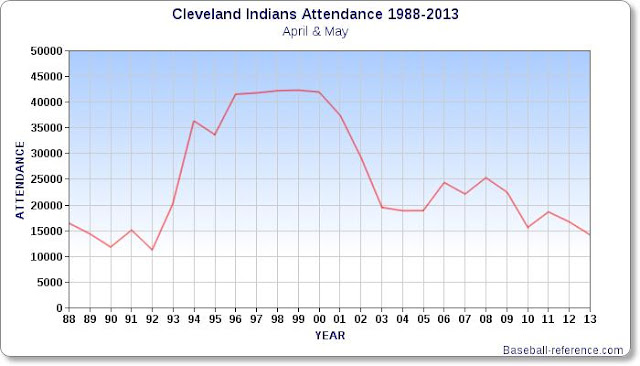 Note the obvious lower numbers through the lean years of the late 1980s and early 1990s before the new ballpark opened. Note the small jump during the last year of Cleveland Stadium in 1993 and the HUGE surge in attendance when Progressive Field opened in 1994 which continued through the playoff years of the late 1990s. A few spikes in the mid 2000s were unsustainable as 90+ loss seasons started piling up. 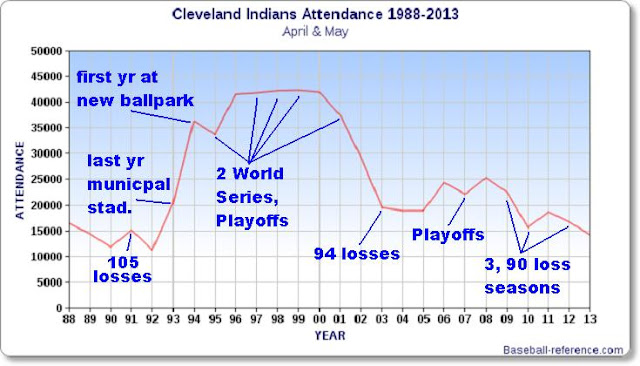 Is the cold weather along the Lake Erie  shoreline a MAJOR contributor to the drop in early season attendance?  The average HIGH TEMPERATURES for April and May since 1988 show a dip this year. Yet temps have stayed slightly milder over the last 5 years. Also note the colder springs during the boom years in the late 1990s. 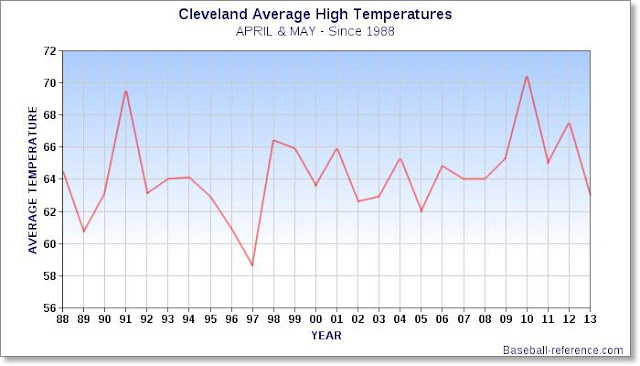 When we superimpose the TOP 10 COLDEST April/May periods over the attendance during that period, we see that huge drops in attendance don't necessarily correlate to colder temperatures. 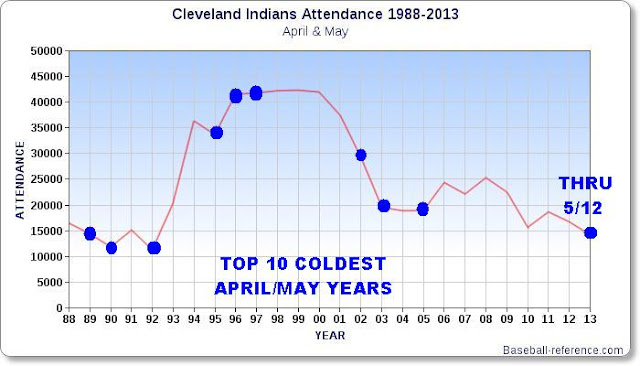 I often write about how people's perception of the weather is very powerful. Our biases become the driving force in our memory formation and recollection. For example, temperatures might drop or rise significantly only a few days during a month. If these huge changes occur during a big event like a wedding or graduation, the extreme cold or warm days will leave a bigger impression in your mind than regular run-of-the-mill day during the week. That bigger impression will weigh heavier in your assessment of how the weather was over a specific period. When people say that attendance is down because of the cold weather, they don't think of averages, they think of extremes! This is why the TEMPERATURE AVERAGE over a 60 days period might not be the best data to use when comparing it to attendance. Its the COLD extremes that guide people's decisions whether or not to go to a game.

In northern Ohio, a cold day in April would be temperatures at or below 50 (an arbitrary cutoff). Are the number of days at or below 50 this year dramatically different than in year's past? Not really. Again, notice the jump in the late 1990s. 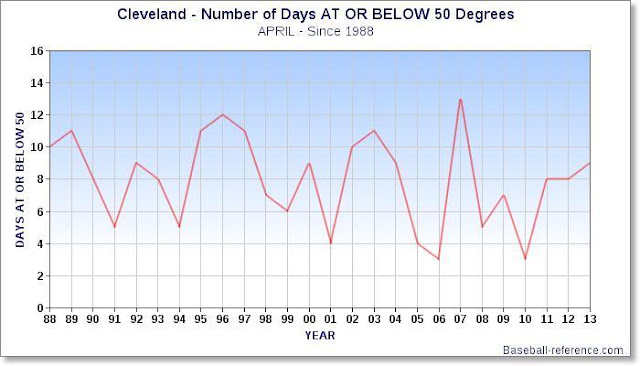 Do colder April days set the stage for below normal attendance? The distribution looks similar to the average high temperature graph earlier 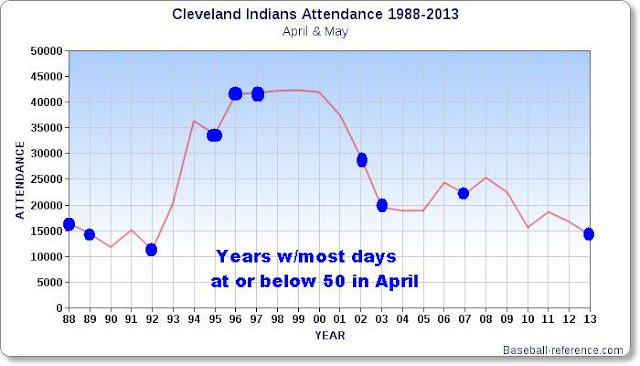 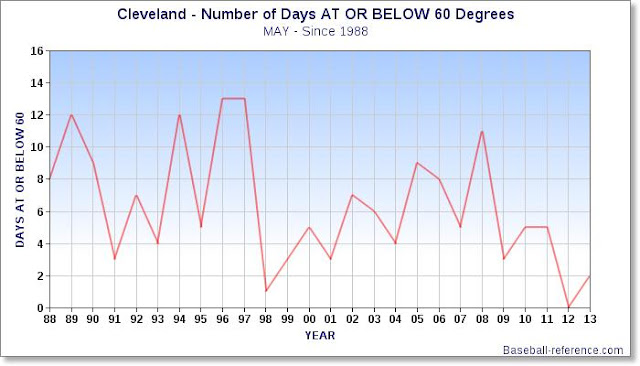 The first two weeks of May ranked top 10 warmest in 140+ years of record keeping in Cleveland. The distribution of cold temperature extremes in May seems to be random. 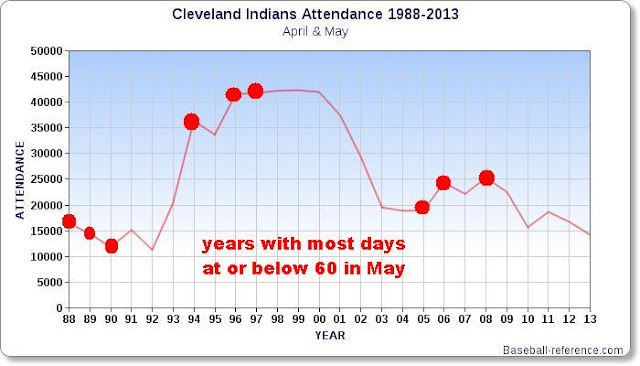 So what can we conclude from all of these graphs of temperature averages, extremes vs attendance?

You can almost always guarantee that more people will come to games after school lets out and summer weather becomes the rule. Green line is summer attendance; red line is spring attendance. Even during the summer, the trend recently is still down. 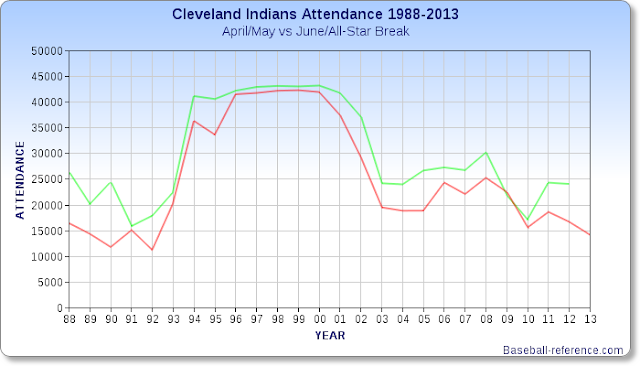 While the weather can and does have an effect on the decision of whether or not to attend an Indians game, the drop in attendance can't be solely attributed to the colder temperatures. In the late 1990s when the Indians were winning, we experienced some of our coolest springs (April and May) in 25 years yet people came out to support the Tribe.  Its hard considering how great those days in the 90s were but we can't base current attendance expectations on the late 1990s numbers for several reasons: Cleveland had its first new ballpark in 60 years, the team was winning AND going to the World Series and--though not shown here--the economy was booming!  On top of that, the Browns moved to Baltimore and Cleveland was WITHOUT a football team.

Guess what? The springs were colder than this year! The weather NEVER kept people from the ballpark


Over the last 10+ years, the new park aesthetic has worn off. The team has been dismantled and restructured multiple times. The bottom line is fans nowadays still don't know what to expect. The weather overall isn't the driver of poor attendance that people want to believe. Throw in a few cold days (nothing record setting) on top of the doubt that's festered for over a decade in the minds and hearts of Indians fans you create a huge detractor.

It will take more than a few weeks of wins to bring even the hardiest of fans to the ballpark.