Email ThisBlogThis!Share to TwitterShare to FacebookShare to Pinterest
Its Memorial Day here at the station. I remember my dad, grandfather, uncle, brother-in-law who served in our Armed Forces over the generations.

I've been watching a few showers popping up on radar.  Nothing heavy, nothing widespread.  One helpful tool we use in determining where and when precipitation develops is the newly operational HRRR model (short for High Resolution Rapid Refresh).  In essence, this model assimilates 3 km radar data into it calculation each hour.  So rather than wait a full 6 hours until the next set of model outputs, the HRRR runs a NEW output every 60 minutes taking into account the ew radar information.

This morning, I ran a little experiment to see how accurate the HRRR was in determining the light showers it was showing for 9AM.  The NWS Cleveland radar was down for repairs so this was a perfect opportunity to see how this would affect the output. 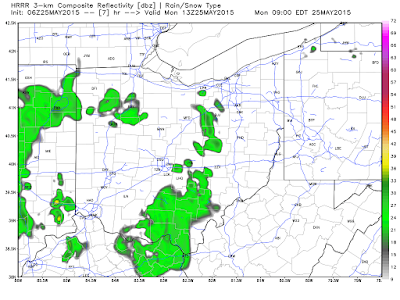 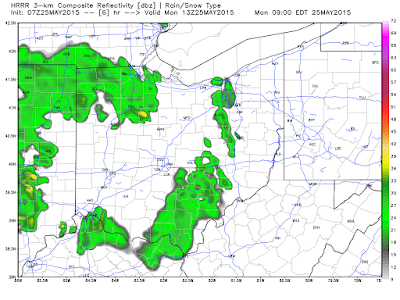 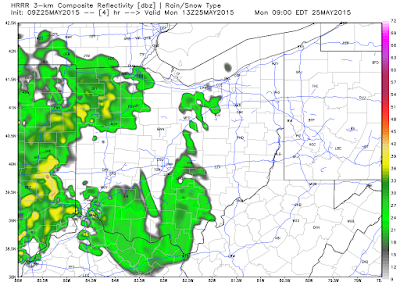 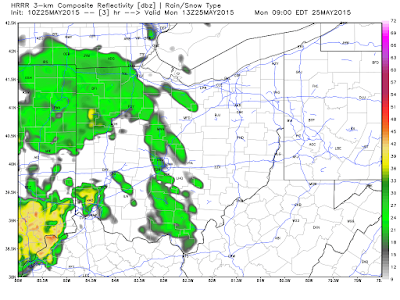 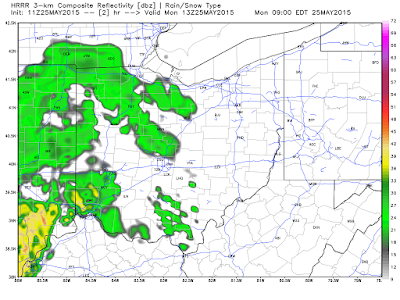 By the 8z run, the HRRR started to shift the light shower further west into the main cluster of rain along the Ohio/Indiana border.  By 11z, it had merged with the western rain area.

Here is what the actual radar looked like at 9AM using the TDWR radar in Grafton since the NWS radar was still down as of this writing.  Hardly any precipitation! 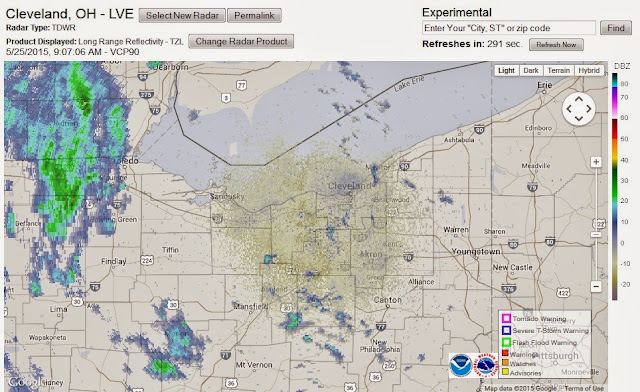 How Does This Early El Nino Start Compare To Others? Implications. 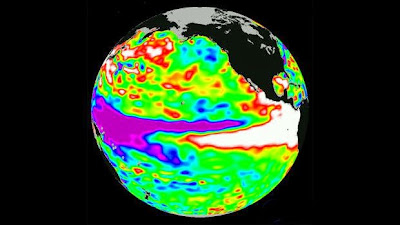 Last year at this time (Spring 2014) the talk of a "Super El Nino" was at the forefront of weather circles. The resultant El Nino later in the year surely didn't fit the hype for a variety of reasons.  This year's close El Nino cousin is a little different.  I believe the "hype" is more warranted this go-around.

Here is a great El Nino animation from NASA showing its evolution.

Using the ONI (Oceanic Nino Index), I logged all El Ninos since the early 1900s.  The ONI is a 3 month overlapping sea surface temperature anomaly index of the Nino 3.4 region, the area used in defining the ENS state.

In determining how different this evolving El Nino is compared to past events, I used the actual NON-OVERLAPPING monthly Nino 3.4 sea surface temperatures anomalies for each early stage El Nino event starting in March and continuing through December. My goal was to see any slight variation in ocean temperature that was smoothed by the 3-month overlapping ONI.  Note: Many of these El Nino events continued into the following year not shown here.

Some key points:  This year's event has started MUCH FASTER and earlier than the historic El Nino events in 1997 and 1982.

The 1986-87 event peaked in summer then slowly dropped by fall after a similar start. 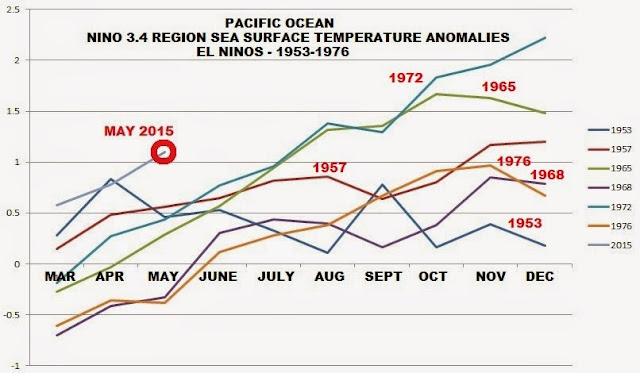 The El Ninos of the late 1920s, 30s and 40s were late bloomers showing little sign of El Nino until mid fall. 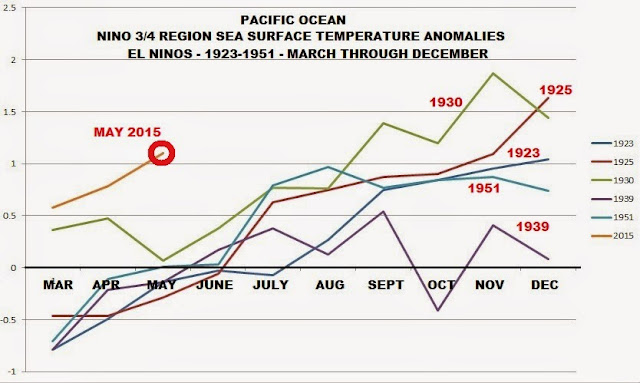 The early 20th century El Ninos had more erratic evolutions. Even the strong El Nino of 1918 struggled until fall/early winter.

Of all 23 El Ninos I charted, only the El Nino of 1905 had WARMER ocean temperatures in May compared to this year's event. That year peaked at 1.5 in September. 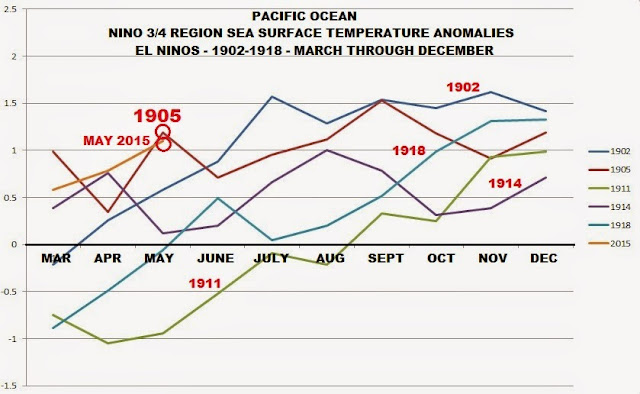 *  El Nino headlines need historical perspective.  Don't be quick to compare this event to the 1997 event per the model projections.

* The rapid rise in ENSO 3.4 ocean temperatures this early in spring historically usually means the El Nino will sustain itself through the summer. The major El Ninos of 1997, 82 and 72 started off slower. A big start doesn't necessarily mean 2015 will be another 1997 or 1982.  In fact, the warmth is more centralized. The warmth in '82 and '97 sloshed eastward by summer.

Warmth so far this year has two lobes, one central near dateline and another eastern closer to South America.


What does all of this mean for the summer, fall and upcoming winter?

* The next 2-3 months will be critical in determining how this El Nino will impact our (US) weather this summer and especially fall.early winter.  The position of the warmth will be a big factor.

*  How much cool water near Australia relative to the ENSO 4 and 3/4 region temperatures will be HUGE in driving the westerly wind bursts necessary in sloshing more warmth to the east keeping the El Nino machine going.

Next week, we'll dive more into why the COOL WATER NEAR AUSTRALIA is so critical in the development of El Nino 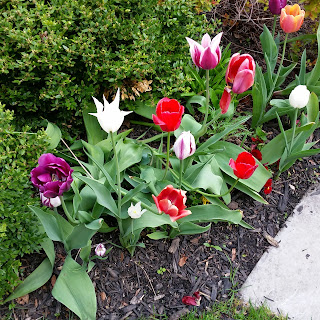 Lots of factors go into seasonal outlooks: Ocean temperature trends, location of warm and cool pools, analysis of pressure patterns over the higher latitudes and Pacific Ocean, persistence. Contrary to popular belief, outlooks are formulated differently than day-to-day forecasts. The cold winter has told us that persistence forecasting can trump other variables because it makes the most sense. The atmosphere is often times slow to respond to changes so why mess with the prevailing pattern if it's strong.  This spring has shown us that although the winter variables remain, as a collective, the result can be quite different with a lot of variation.

May has been well above normal--warmest first 11 days since 1965 in northern Ohio. 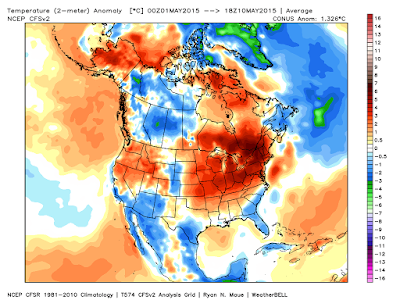 Before we talk about Summer 2015, let's head back to last summer (2014). Ocean temperatures were still dominantly warm in the north and east Pacific nearing the west coast. Tons of talk about a Super El Nino faded as the equatorial Pacific temperatures dropped into neutral territory or slightly weak/central. Below are the ocean temperature anomalies for the overlapping months starting in April and ending in September.

The ridge in the west driven by the warm coastal water continued to dominate into the summer.

The Bermuda High made a late season resurgence in the southeast which boosted temperatures by Labor Day. Cleveland's last 90 occurred on September 5th which was also the last 80 degree day until early may of this year.

Overall, the lack of any Bermuda High signature kept temperatures across the Ohio Valley and midwest below average for much of the summer 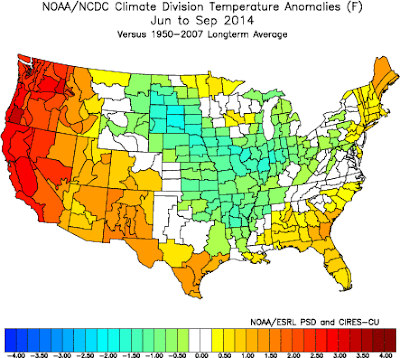 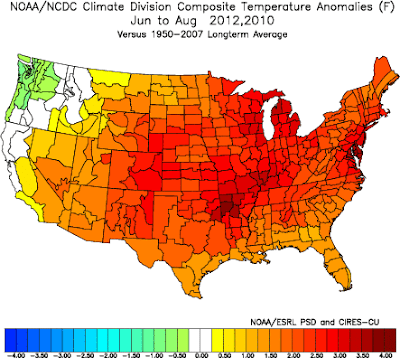 The conditions in the Pacific are much different since those hot summers of 2010 and 2012.  You can see the smaller Pacific changes since last summer...

... The warm pool along the west coast is getting warmer and more concentrated. The cool pool northwest of Hawaii is building. Equatorial ocean temperatures in the ENSO 3.4 region have risen along with some larger basin increases more than at this time in 2014.


According to the TAO PROJECT SITE, average ocean temps increased 0.4 degrees since January in equatorial Pacific down to 300 meters.  After sifting through the data, a quick volume calculation shows the increase in the volume of warmer water in the equatorial eastern Pacific since January is equivalent to the volume of Lake Erie 29 times over! That's a ton of water but it's still 5 TIMES LESS than what was present in early 1997 before the Super El Nino formed.

Big question: Will this evolve into a more significant El Nino than this past winter? CPC forecasts are calling for it.  The IRI forecast as well so I don't think there is any reason to stray from those blends. But I am skeptical of this turning into a major El Nino event. Too much warm water off the coast of Australia which keeps pressures low. Cooler water would keep high pressure west which would promote more westerly wind bursts keeping the El Nino machine churning and building.  Check out a great El Nino/La Nino video which covers the importance of the WESTERN COOL POOL from Australia's Bureau of Meteorology.

During the Super El Nino early stages in 1982 and 1997, the eastern Australian cool water was a dominant feature. The other strong El Ninos which started in 1972, 1965 and 1957 all had cool western Pacific water.

Until some western Pacific cool water develops along with continued moderate eastern/central warming this summer resulting in an MEI response, I'm staying bearish. 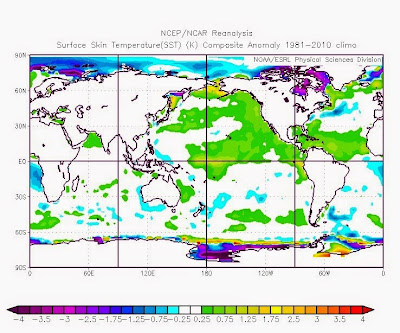 The resulting summer sea surface blend looks like this.

Without taking into account the weak El Nino, the summer blend calls for below temperatures across the Ohio Valley this summer with slightly above normal precipitation.

Incorporating the El Nino yields a slightly different result for JUNE through AUGUST:


TEMPERATURES NEAR OR SLIGHTLY ABOVE NORMAL 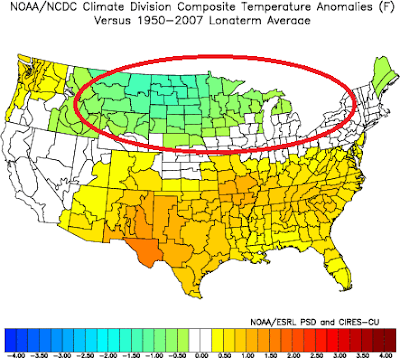 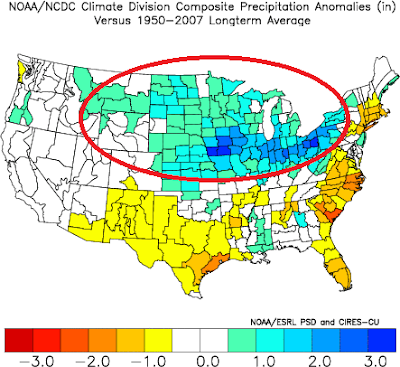 Our official SUMMER OUTLOOK IS AS FOLLOWS: 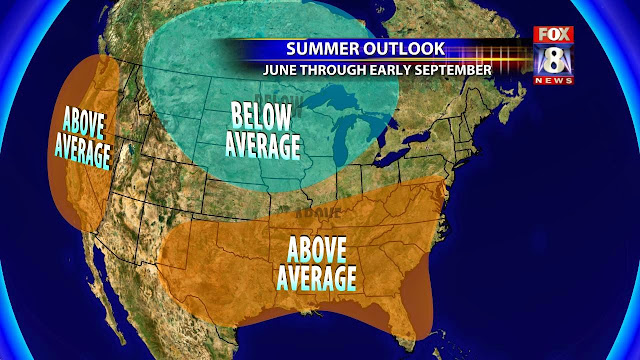 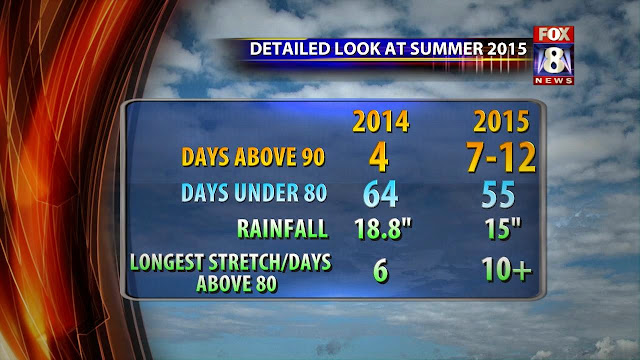