Email ThisBlogThis!Share to TwitterShare to FacebookShare to Pinterest
You have probably heard about the BIG EL NINO or SUPER EL NINO or some phrase like that. If not then you will soon enough. Eventually EL NINO will trend on social media by the end of September. You heard it here first.

But hold on. Doesn't Big El Nino mean mild winter?  Not necessarily. See the differences between the last BIG El Nino in July 1997 and July 2015.  Also, notice the differences in the North Atlantic ocean temperatures? This is why the winter 2015-16 outlook is not an "El Nino shoo-in". Not all El Ninos are alike. (See my post on the different El Ninos and what they mean for our weather) 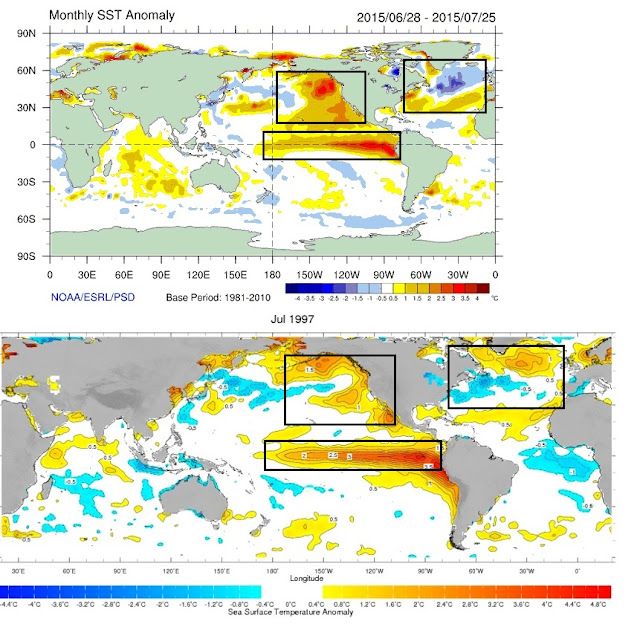 When will we know enough to make an educated assessment on the upcoming winter?  Probably by the end of September. Stay tuned...
at 8:20:00 AM Posted by Scott Sabol No comments:

Email ThisBlogThis!Share to TwitterShare to FacebookShare to Pinterest
The persistent pattern featuring frequent rain across the Ohio Valley ramped up into high gear the second half of June. Most points from Columbia, Missouri east into the Mid Atlantic states received between 100 and 400% MORE rainfall than normal this last month. 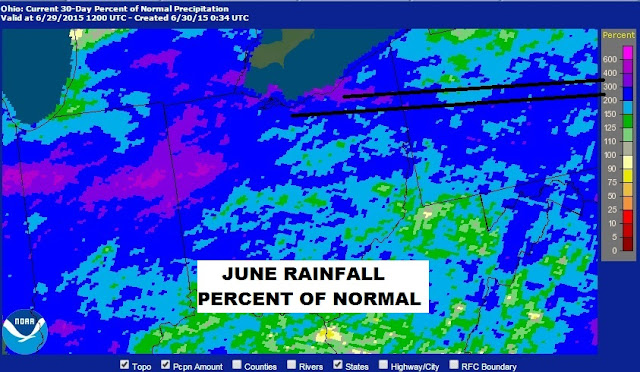 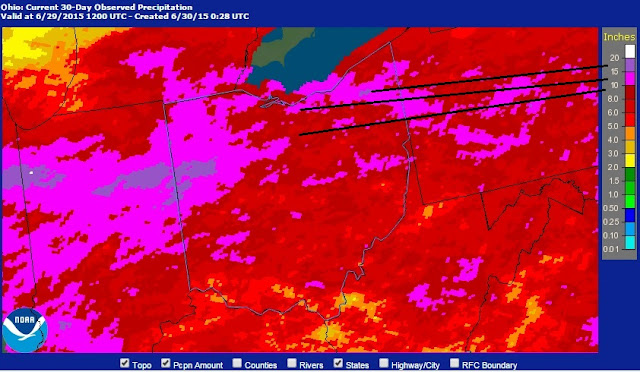 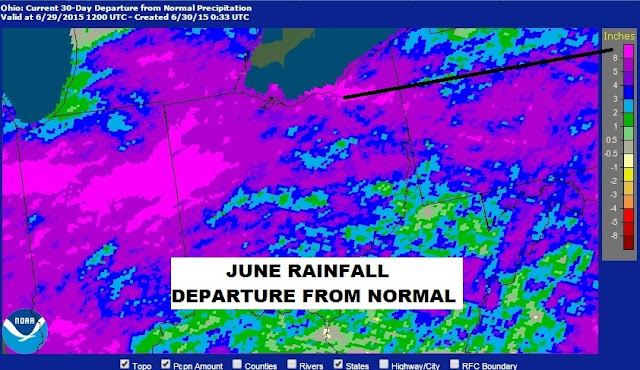 Parts of northern Ohio had between 10 and 15 inches as a stalled front oscillated back and forth triggering clusters of rain and storms. Cleveland's monthly total was 3rd most in 145 years, most since 1972.  Ft Wayne, Indiana set their all-time June rainfall record with 11.98". It broke the record for the wettest month set in July of 1986!

Last summer's wet region was centered in the heart of the corn belt. 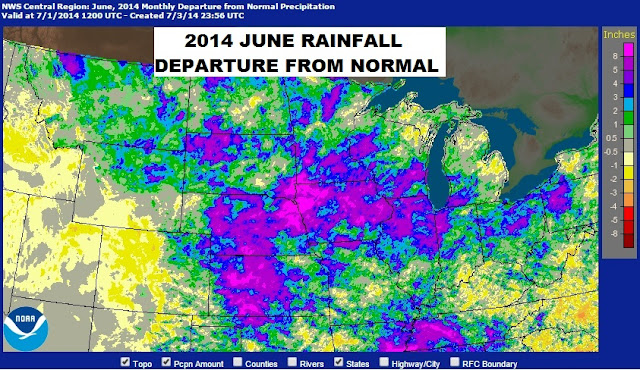 This summer's wet areas have shifted east into the Ohio Valley including Pennsylvania, Maryland and portions of New Jersey. 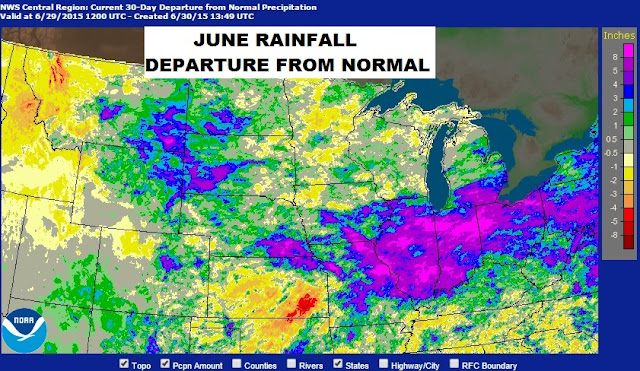 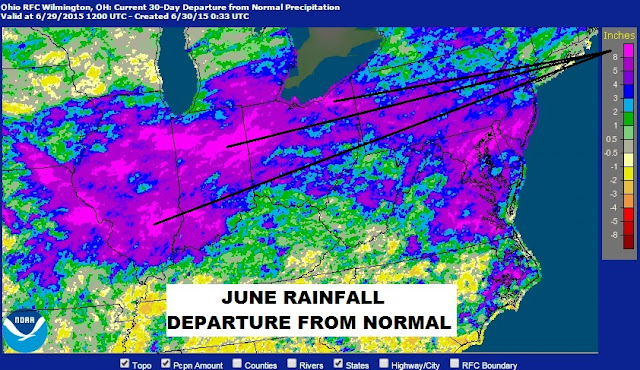 Compare the past two summer to the very warm summer of 2012. Dry conditions prevailed with the development of a flash drought across parts of the US. I gave a talk at the Ohio State Weather Symposium on the causes and the conditions that feed that summer's dry pattern.

My POWER POINT from the symposium is here. Check it out.

The average temperatures for July and August in 2012 were certainly influenced by the lack of rainfall. Notice the location of the temperature anomalies. 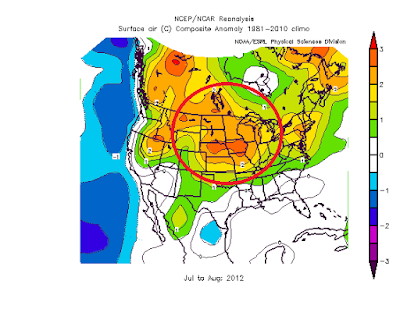 Temperature anomalies in 2014 were noticeably cooler over the wetter ground in the Corn Belt. 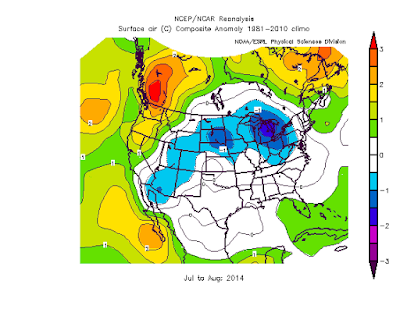 I emphasize that the rainfall or lack thereof was not the primary driver of the patterns in either 2012 or 2014.  It was an enhancer. June temperatures were at or slightly below normal. 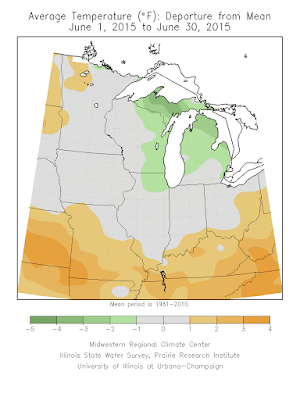 Record high temperatures across the Midwest were markedly lower in 2014 vs 2012. 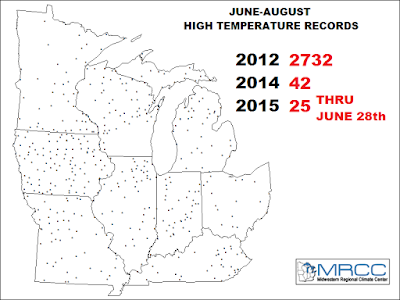 Big question, how will the June rainfall in the Ohio Valley influence the temperatures in the upcoming weeks?

More than likely, we should see a dampening of long stretches of heat in the mid-west, corn belt and Ohio Valley.  July could end up with temperatures at or below average from St. Louis to Cleveland.