Email ThisBlogThis!Share to TwitterShare to FacebookShare to Pinterest
After an extremely mild winter, the pattern across the North American continent shifted significantly colder around the second week of April.

Remember that April started off above normal across the eastern US. The first 9 days of April the average high temperaure was close to 60 degrees in northern Ohio! We reached 72 on April 7th.  Slowly colder air settled in especially across a large portion of the country. Each graphic below illustrates the gradual progression of the cold (above/below normal temperatures) in 20,15,10,7,5,3,1 day periods prior to April 15th. The last graphic is the 5 day period from April 15-20th.


Why these early spring changes? Let's go back to the winter for a moment. The pattern was dominantly mild. There was no "blocking" over Greenland.  The Arctic Oscillation stayed STRONGLY positive. The Polar Vortex was strong with no big perturbations south.

By the last week of March, notice the changes. The northern Pacific high shifted west. A strong ridge developed in the North Atlantic! The SE ridge from March was still intact.

By the first week of April, the ridge across the eastern US was breaking down. High latitude blocking was present.

Between April 6 and 10, the high started to pop back in the southern states. Northern Pacific ridge was far weaker. The trough in New England was building in response to the blocking

By April 11-15th the trough/ride wavelength were much larger. The central US/eastern US trough had grown (blue colors) and was locked in.

April 16-19th featured the dominant trough across much of the US and Canada with the exception of Florida.

Watch how the colder air bled southeast throughout early/mid April in response to the upper level changes. From April 14 to the 23nd we had 5 days in the 30s and 40s with wind chills in the 20s in spots! 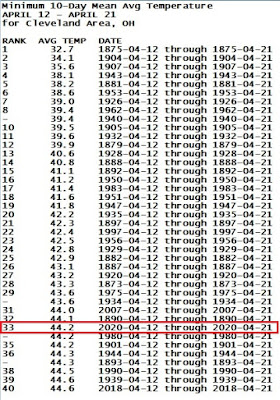 Here's a more recent analysis: Below is a graph showing the number of days with below normal temperatures through April 2nd since 1990 (last 30 years) in northern Ohio (Hopkins Airport-Cleveland). Perhaps we forgot about 2018 with MORE days below normal than 2020. 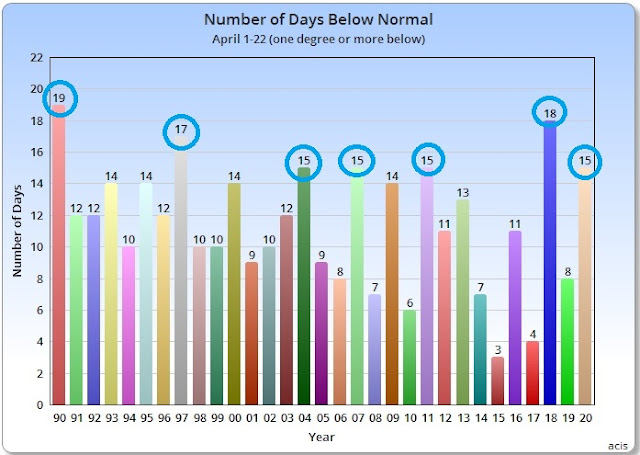 How about April snow in these years?  Great question. 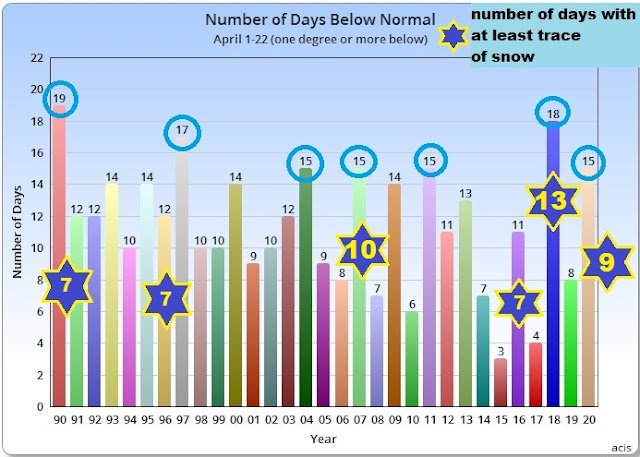 So while it has been colder than normal in April, it is not unprecedented.  The recency effect is strong here as we may have placed more weight on this year because it is front of mind.

A FEW THINGS TO NOTE:  THE COLD APRIL ISN'T A RESULT OF THE RELATIVELY MILD WINTER. SIMPLY BECAUSE THE WINTER WAS "MILD" DOESN'T AUTOMATICALLY MEAN APRIL WAS GOING TO BE COLDER THAN NORMAL. ALSO, THE GLOBAL/CONTINENTAL DRIVERS OF WEATHER PATTERNS IN WINTER CAN PRODUCE DIFFERENT TEMPERATURES, ETC IN SPRING AND SUMMER. THIS IS NOT CONFIRMATION OF "GLOBAL COOLING". IN FACT ONLY A SMALL PERCENTAGE OF THE WORLD HAS HAD TEMPERATURES BELOW NORMAL THIS MONTH. 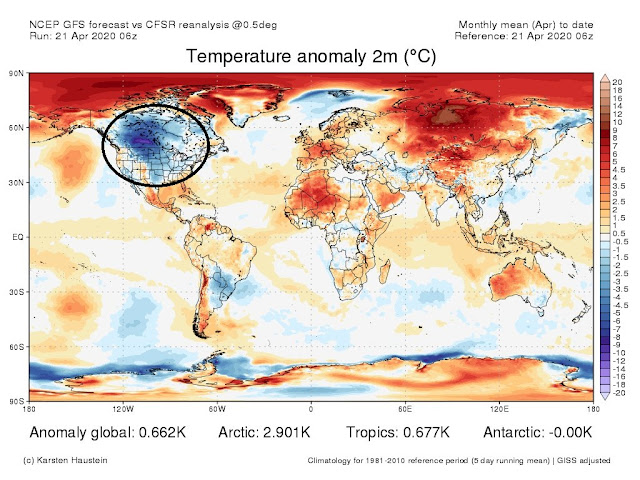