Why Didn't Monday's Snowfall Pan Out?

My cardinal rule is NEVER post snowfall numbers further out than 48 hours. Way too much uncertainty especially with panhandle systems. Nothing exemplifies this prime directive more than what happened over the last 24 hours.  Let's set the stage.

Winter storm watches then warnings were issued Sunday across more than 600,000 square miles of the US.  The largest single winter warning map since 2011. 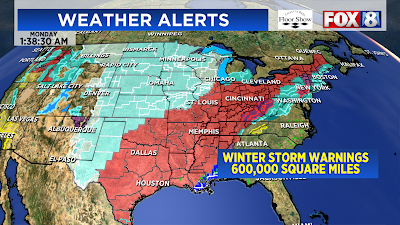 The future radar track (HRRR) took the bulk of the snow through Ohio over a 10-12 hour period. Now watch the mixed precipitation area (orange/purple/pink) try to inch into east central Ohio.  A common occurrence with panhandle storm systems.

This is what I mentioned during the Monday morning 40+ weather segments as a REAL possibility given the conditions. At the time did I think it would reduce the snowfall forecast in half? Nope.  So what happened?

I captured the Monday model projections from 1am,7am, 1pm and 7pm time periods for comparison on how the event evolved over time.

Notice how the LOW made some subtle shifts. Originally it was east of Columbus with the early Monday morning projection. It started to shift more north the south again with the 3rd and 4th projection (see below).

These small scale shifts gave us some indication that the warmer air was influencing the movement. The temperatures at 5000 feet was WARMER than the air closer to the surface in eastern/SE Ohio.

The total liquid precipitation projected earlier in the day was substantial and widespread.

It wasn't until early Monday evening where the precipitation projection went down. (See below and right)

The precipitation type was always in question across extreme southern counties. Bottom graphic below shows a last-minute shift with sleet/freezing rain north and a westward shift in the heavier snow. 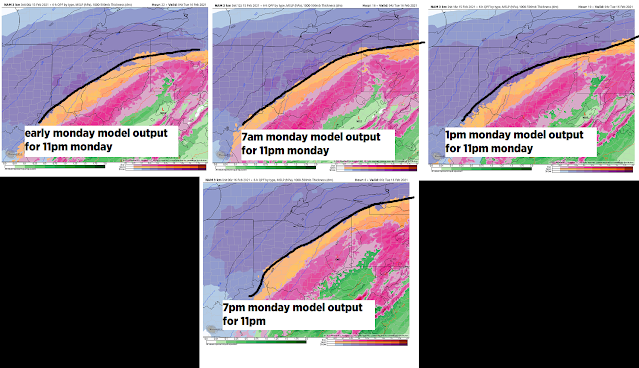 The future radar also depicted the same late afternoon/early evening changes to the position of the wintery mix & heavy snow.

As the warm air became more influential, the snowfall output shifted into NW Ohio and was greatly reduced south of Akron. 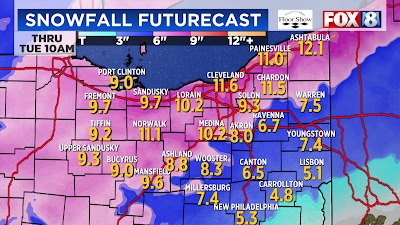 The snowfall totals as of 10am Tuesday morning from the NWS in Cleveland. 7-12" totals from western Huron/Erie counties into NW Ohio. 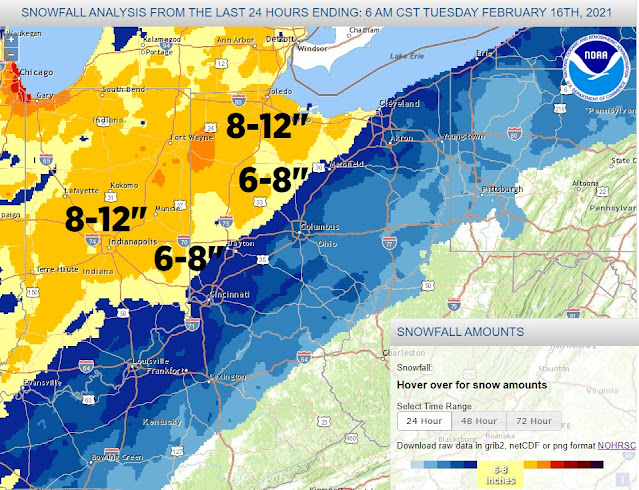 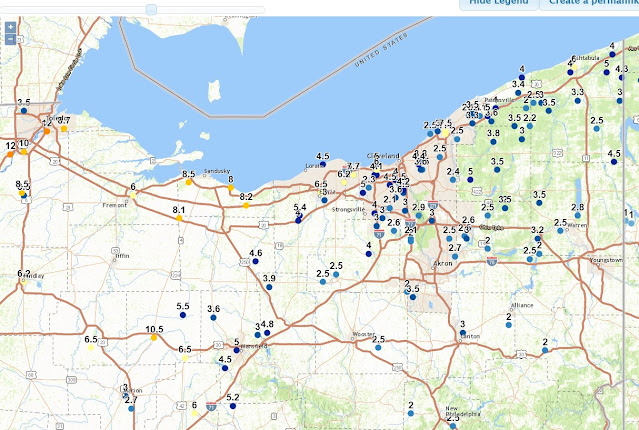