Will Cold Air Return After the Late February Warmth?

Email ThisBlogThis!Share to TwitterShare to FacebookShare to Pinterest
The stubborn southeast ridge threw a wrench in our winter temperature and snow outlook for Cleveland and the Ohio Valley (more on that next week). We anticipated it to stay further east It has remained very strong throughout winter driving many panhandle low type storms along with temperatures recently to levels only reached a few times since record keeping began in 1871.

The stretch of warmth in Cleveland will more than likely end up being the warmest 11 day winter stretch ever!  This February stretch is similar to a warm February stretch back in 1976 and 2000. Notice the widespread nature of the warmth back in those years.

Looks similar to this stretch... 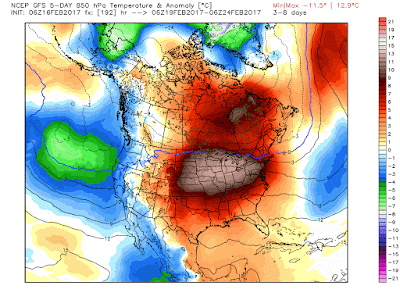 Yet California keeps getting pounded with heavy rain/snow as the very strong Pacific jet stream continues. Reanalysis of vector wind anomalies at 300 mB since December 1st (3 day running average). Pacific jet is through the roof strong. No sign of the ominous western ridge which was dominant over the last several winters.

The MJO strength increased significantly since early February to very high amplitudes into Phase 6,7 and 8 territory. 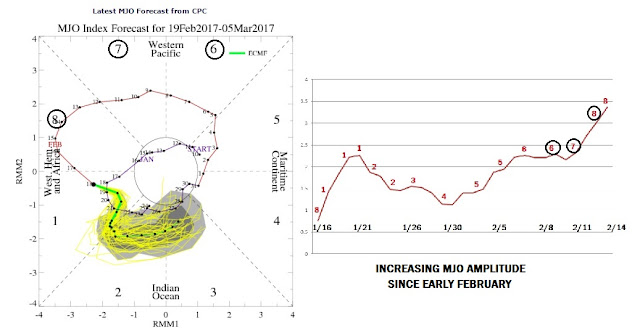 Phase 7 and phase 8 in February with high amplitudes tend to favor warmth east. Yet look at Phase 8. It tends to favor cooler temperatures east (middle chart below). So even with a very strong MJO the temperatures can be highly variable. What I find interesting is that the Phase 1 temperature composite (far right map below) looks very similar to the overall pattern since this current warm up began.

The chances of this February finishing out as the warmest ever in Cleveland is climbing fast. 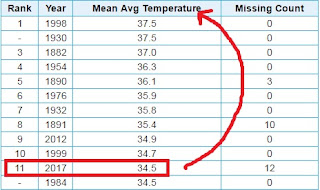 Will colder air return?  If so, how strong?

To answer this we look at the Pacific teleconnections to start March. I reference my quick cheat sheet so that I can visualize the pressure regions in question.


While we should anticipate short-lived cool intrusions across the Great Lakes, temperatures overall will average out near the 30 year average (see lower right graphic) for the first week of March.  For Cleveland, daytime average high temperatures for March are in the lower 40s. 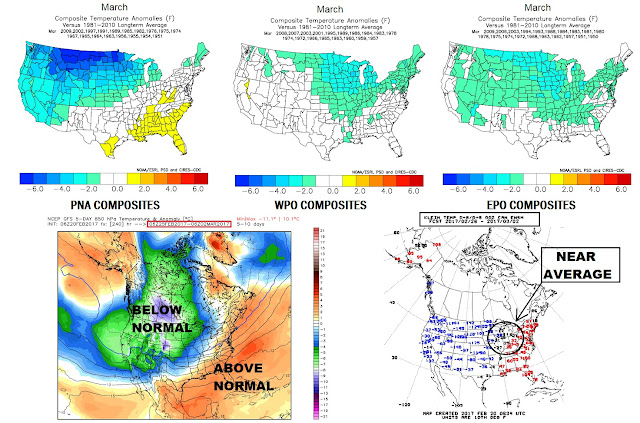 Long range teleconnections for the middle of March show some colder signs centered central US and west. Something to watch over the next week. 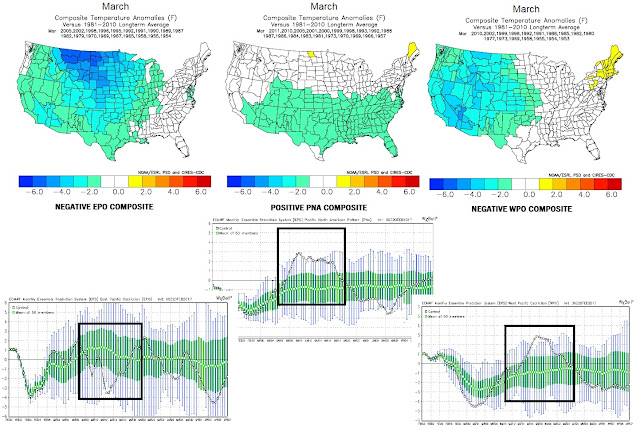 The South Oscillation Index (SOI)--changes in the pressure patterns in the tropical Pacific Ocean (click here for more on the SOI and here)--shows rising pressure in the central US March 10-13th after the central US trough slides east March 7-9th.

Will the weak trough be a more permanent feature over the Great Lakes or will a warmer ridge develop by the 3rd week of March?  The answer will be apparent in both the SOI changes. The teleconnections will reflect the changes by the end of next week. 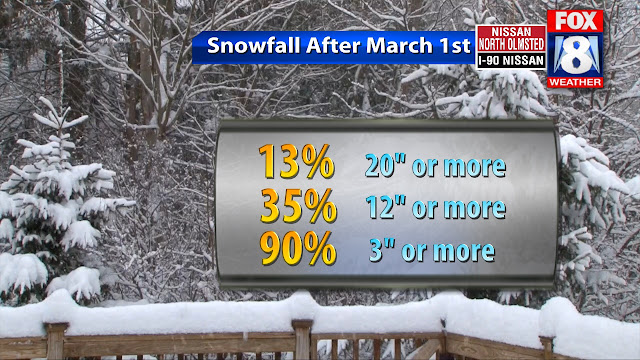 Email ThisBlogThis!Share to TwitterShare to FacebookShare to Pinterest
We hear it every winter after a period of extremes:

"This cold means a rough start to spring".

or..."These warm temperatures mean were going to get a big snow in March".

Is there any truth to this historically?

The first chart below shows some of the coldest winters (December through February) on record in Cleveland and each daily snowfall occurrence regardless of the amount from the 3rd week of February to roughly the Vernal Equinox (March 20th). I didn't use years prior to 1900 as snowfall data is frequently incomplete. The second chart shows the same daily snowfall but for some of the warmest winters on record. 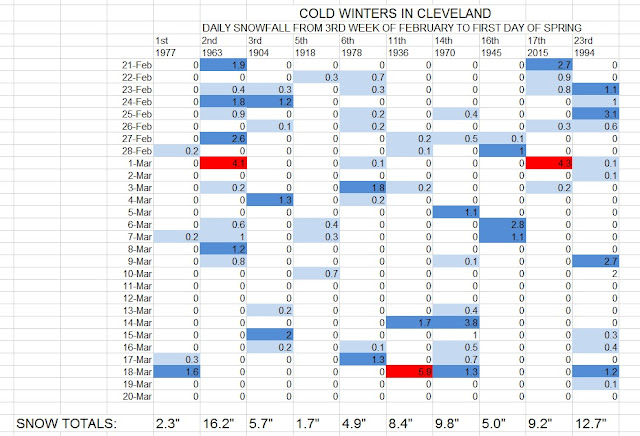 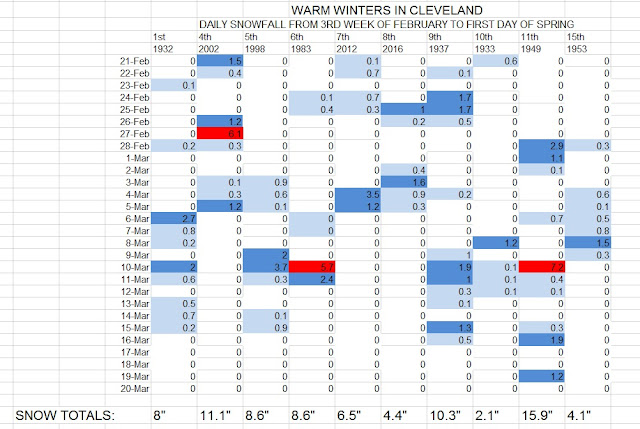 Bottom line: A very warm or cold winter overall seems to have little bearing on late winter snowfall
at 9:20:00 AM Posted by Scott Sabol No comments:

Email ThisBlogThis!Share to TwitterShare to FacebookShare to Pinterest
Yes. It's a catchy title that probably evokes many suspect responses.  Let me explain my self:

Big cool down late this month/first week of February followed by a warm up by mid month February per the Bering Sea Rule which dictates ridge over the Bering Sea correlates well to eastern US ridge roughly 16-18 days in the future.

The GFS shows this ridge evolution quite well.

This warm up may be the final nail in the coffin shutting down arctic cold for good this winter. Why? Check this out...how much snowfall did we get from 3rd week of February to start of spring in 10 historically cold winters in Cleveland? Not much... 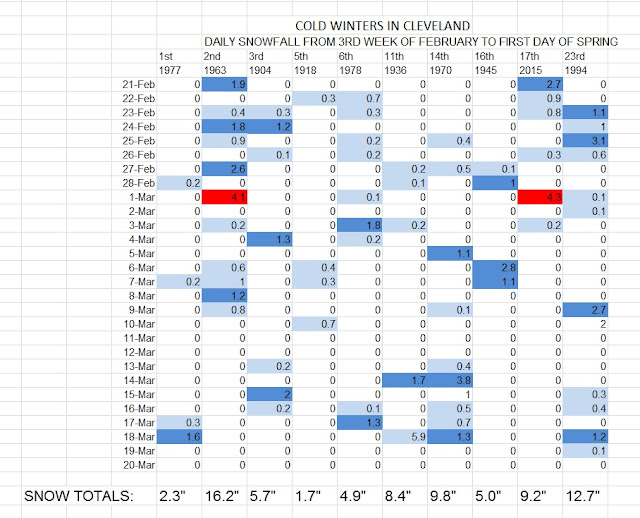